Congratulations convict, you've been selected for reconditioning. Revived from your dehydrated sleep and put to work, your task is to lead a group of prisoners of similar fate out of the Sargasso Nebula to freedom. Never fear, if you aren't up to the task or get taken out by a patrolling Warbot, there are always other prisoners ready to take your position. Whether you're ready or not, this is how you're going to seek out your freedom in Void Bastards. 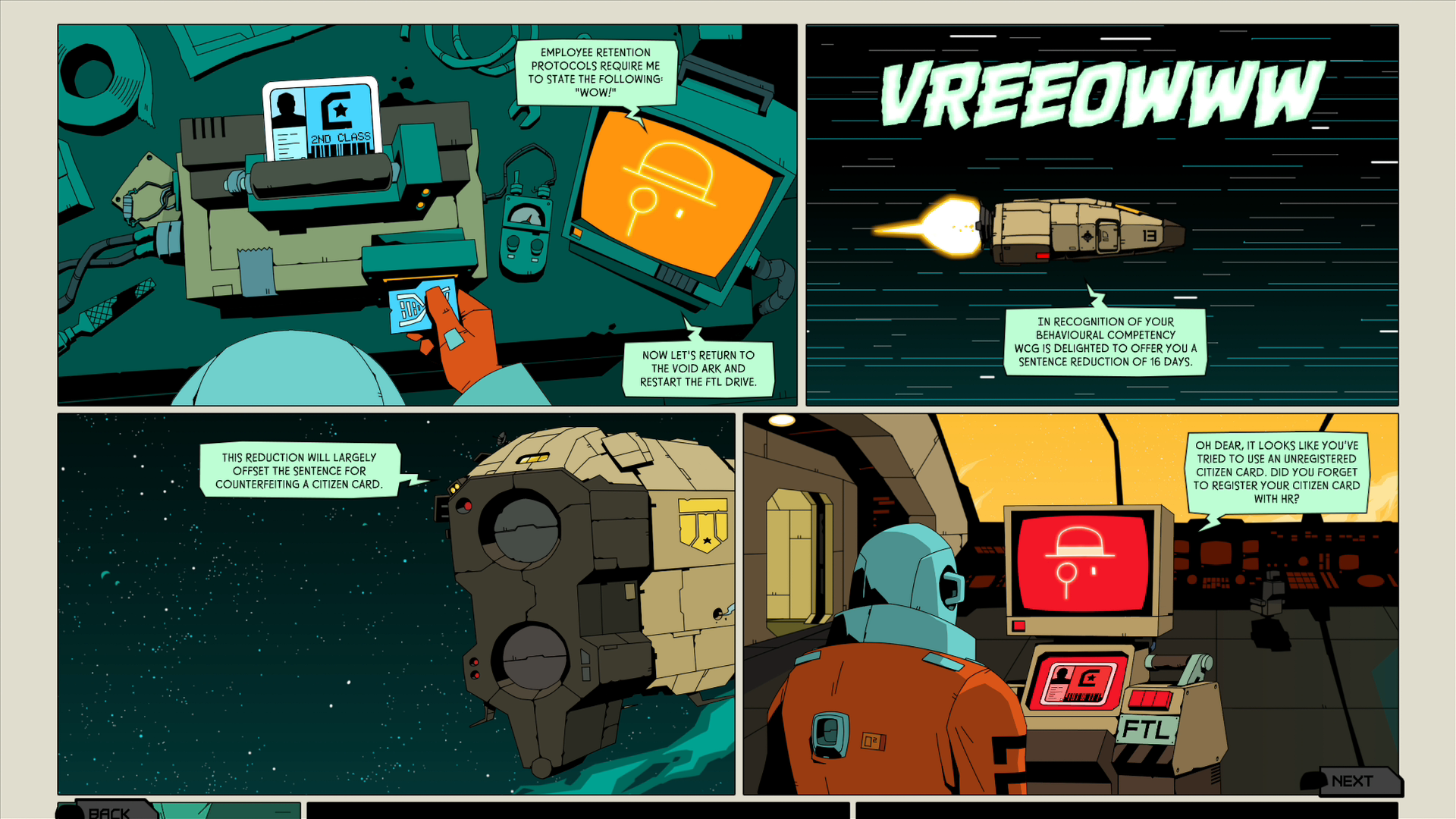 While disguised as a first-person shooter, Void Bastards plays much more like a cross between System Shock and a puzzle game underneath the hood. Each mission objective has the player seek out key components to repair their vessel in hopes of escaping the Sargasso Nebula. To do so, you're presented with a star map and given free agency to fly outwards to derelict ships and space debris to seek out these parts for as long as your fuel stores hold out. Your mission each time you board a derelict vessel is to get in, get some loot, and get out. Whatever enemies and security measures are active aboard the ship will attempt to take you out but you often can get through a ship without firing a single bullet. If you do want to play Void Bastards like a shooter, each of the five weapons (six, if you purchase the Tydy DLC) has their own unique purpose and work better for taking out certain enemy types than others. Near the end of my first run, I was so flush with ammo that I had no problem boarding a ship and taking everything out with my stapler shotgun. Before that turning point, you'll often only have enough ammo to take out a mere couple of enemies that stand between you and that shiny new laminator that you need to complete one of your key objectives.

Void Bastards plays it smart when it comes to the equipment that your convict is allowed to take aboard a mission. No matter what you've crafted, you're only permitted to take along a primary weapon, some form of tactical throwable equipment, and one device that's best for neutralizing specific types of foes. All of this gear is crafted between missions, and even in the (un)likely event that your current convict is obliterated into space dust, that progression is never lost and the weapons destroyed. Sure, you might lose all of the ammo and food stores that you've saved up, but that fancy cattle prod you worked so hard across multiple nebulas to finish? That'll still be there when you return. 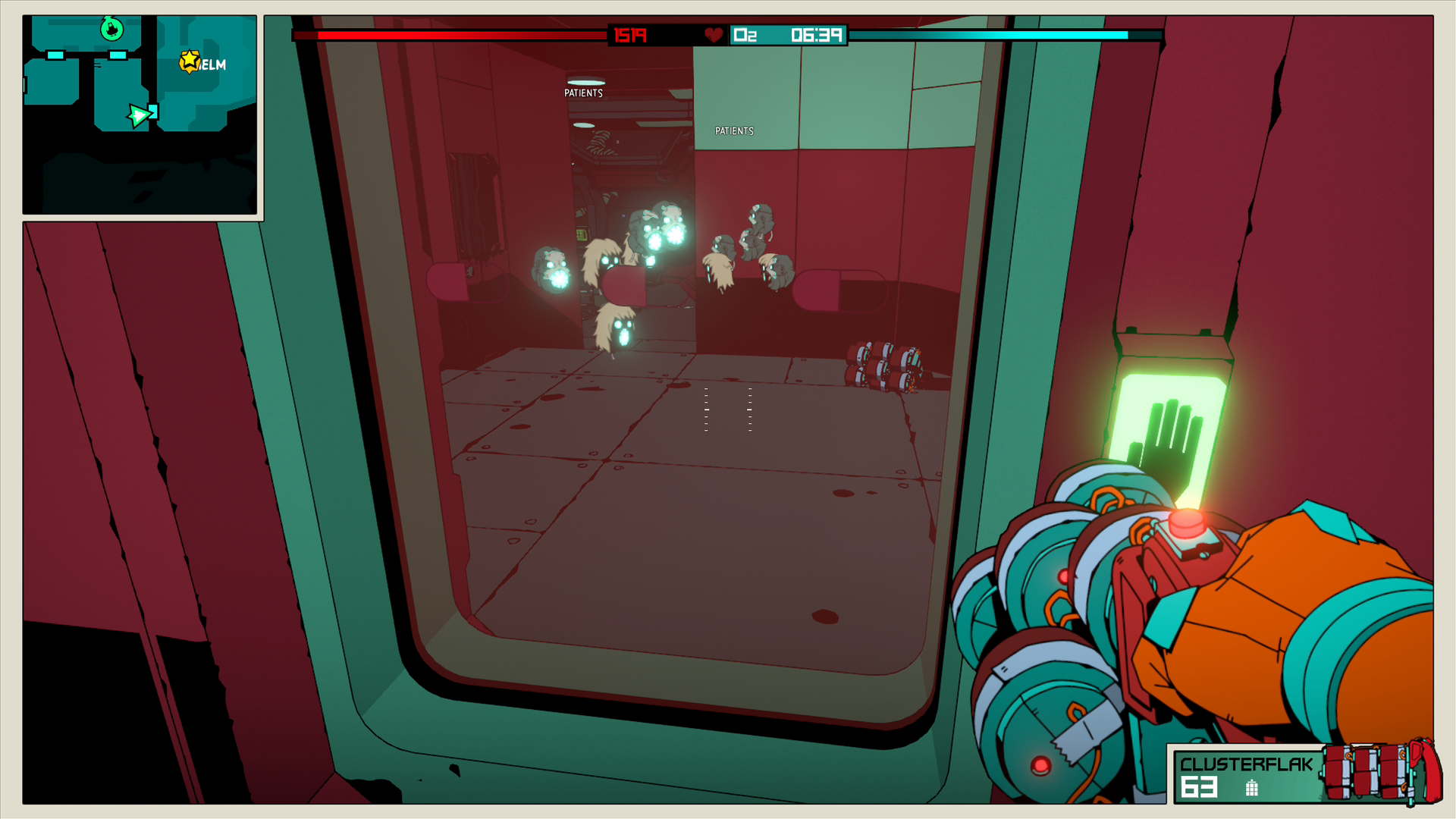 With a fairly limited number of equipment pieces that can be crafted, each is somewhat balanced to where there isn't necessarily one piece that's going to be the definitive item in your kit (except for the Zapper, which can stun regular enemies as well as anything mechanical long enough for you to make a quick exit). For much of each run, ammo is a scarce commodity and the game actively encourages the player to conserve as much as possible without trying to get into a firefight with whatever enemy types are aboard the derelict vessels you're choosing to explore.

Contrary to the trial-and-error approach to roguelites, Void Bastards often provides the player with all of the information they need to survive out in the open. From the star map where you plot your next destination, each location gives you a precise readout of what to expect, from the enemies aboard to any unique modifiers right down to the crafting component that may be onboard. The vessels themselves can be as much of a challenge as the enemies themselves, as power failures or security drones are constantly a threat. 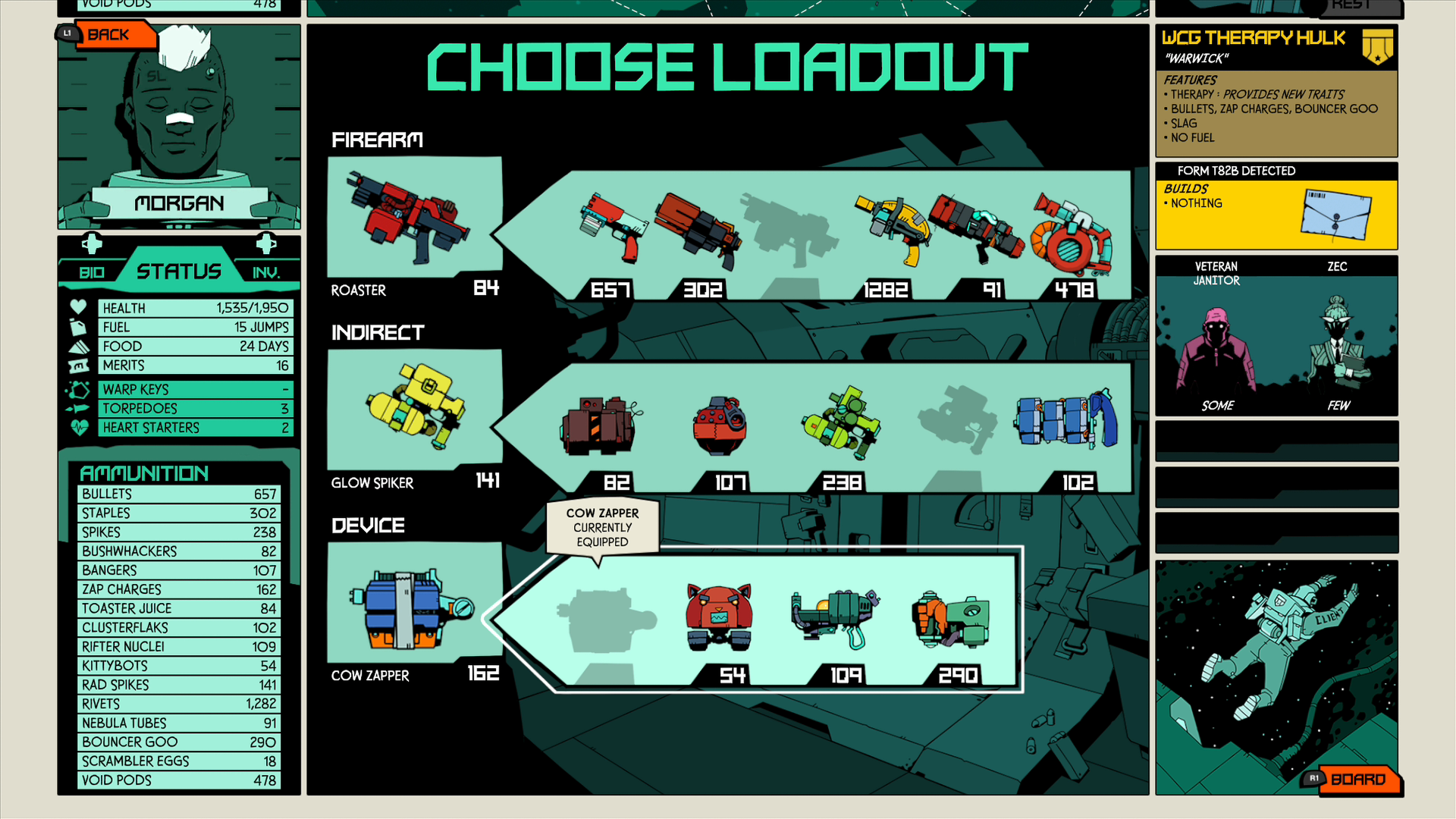 Whether it's the first ship you embark to explore or the fiftieth, Void Bastards has a similar formula for each type of vessel. Of the seven different factions of space vessels, you'll be able to tell which ones are worth exploring at a glance. If you're low on health, a Xon ship will hold a healing station that can get you back up to peak condition without having to spend multiple days resting and consuming precious food. A Lux barge will routinely carry base materials for all of your crafting needs and Krell marts offer just about anything you need for a modest price.

The key components for crafting in Void Bastards are similarly distributed in a very smart fashion. Most ships will carry a crafting part that's necessary to create the upgrades that persist between characters for that particular run. What I find to be a brilliant move is that parts always spawn in one specific room: Drills show up in the dock, Water Based Lube in the suites, so on and so on. If you're looking simply for the upgrade part and are flush on fuel and food, it's easy to make a beeline for that region of the ship and dig around through any storage lockers until you find what you're looking for then rush back to the airlock to make your escape. If you're lucky enough to find a ship that doesn't need to have the generators restarted to restore power (containers are locked down any time the power is offline) or trigger a security alert, you can usually get in and out in just a couple of minutes with minimal resistance from the enemies on board. 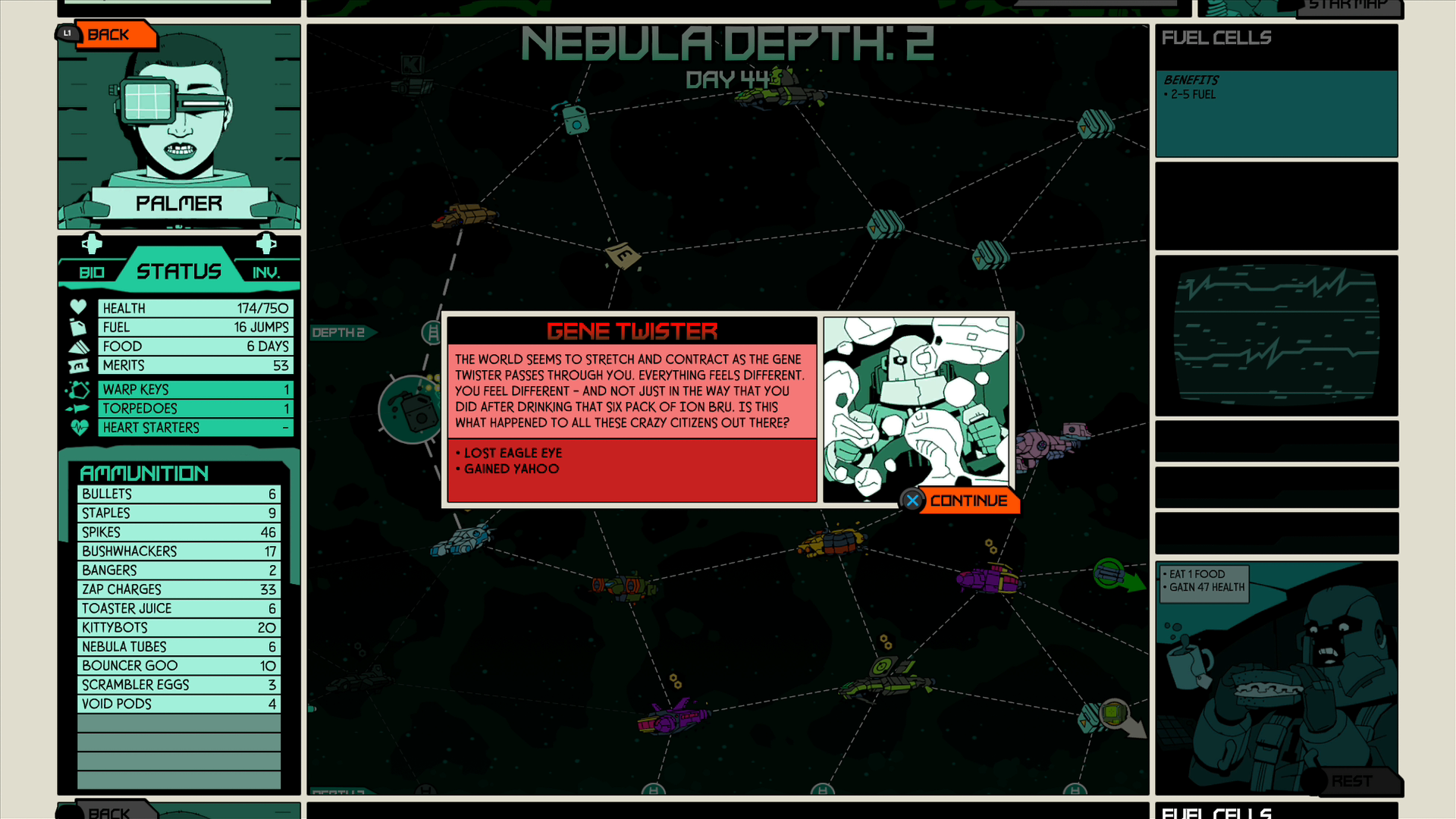 Void Bastards' comic book aesthetic doesn't just exist in the story scenes or UI elements but rather the game as a whole. The 2D designs of enemy combatants makes it easy to spot them from a distance and recognize a threat quite intuitively, while the art style is colorful enough to pop out against the drab interiors of most ships. The overall blue palette to the world fits in the context of space and I found the use of color overall to be both modest and charming as Blue Manchu created their in-game universe.

Part of the beauty to Void Bastards is in its simplicity, not just from the ship designs and limited emphasis on combat. Anything you can interact with glows bright green so you can easily scan a room and see where all of the precious loot is hidden. Doors that can be opened always have one glowing button at the top for entry/exit while a button down below can manually lock the door, blocking most (but not all) enemy types from following you through the portal. Similarly, each class of ship has similar layouts and after a while, you'll start to develop a knack for knowing the best routes through a ship or where to find the FTL drives where a couple of units of fuel might be stashed away. Void Bastards operates on a pretty simple ruleset and once you get a feel for how the flow of boarding and looting goes, it can be a very fun experience. Compared to the other roguelites and roguelikes of various forms, Void Bastards gives the player so much information that little can surprise them once they master that flow. 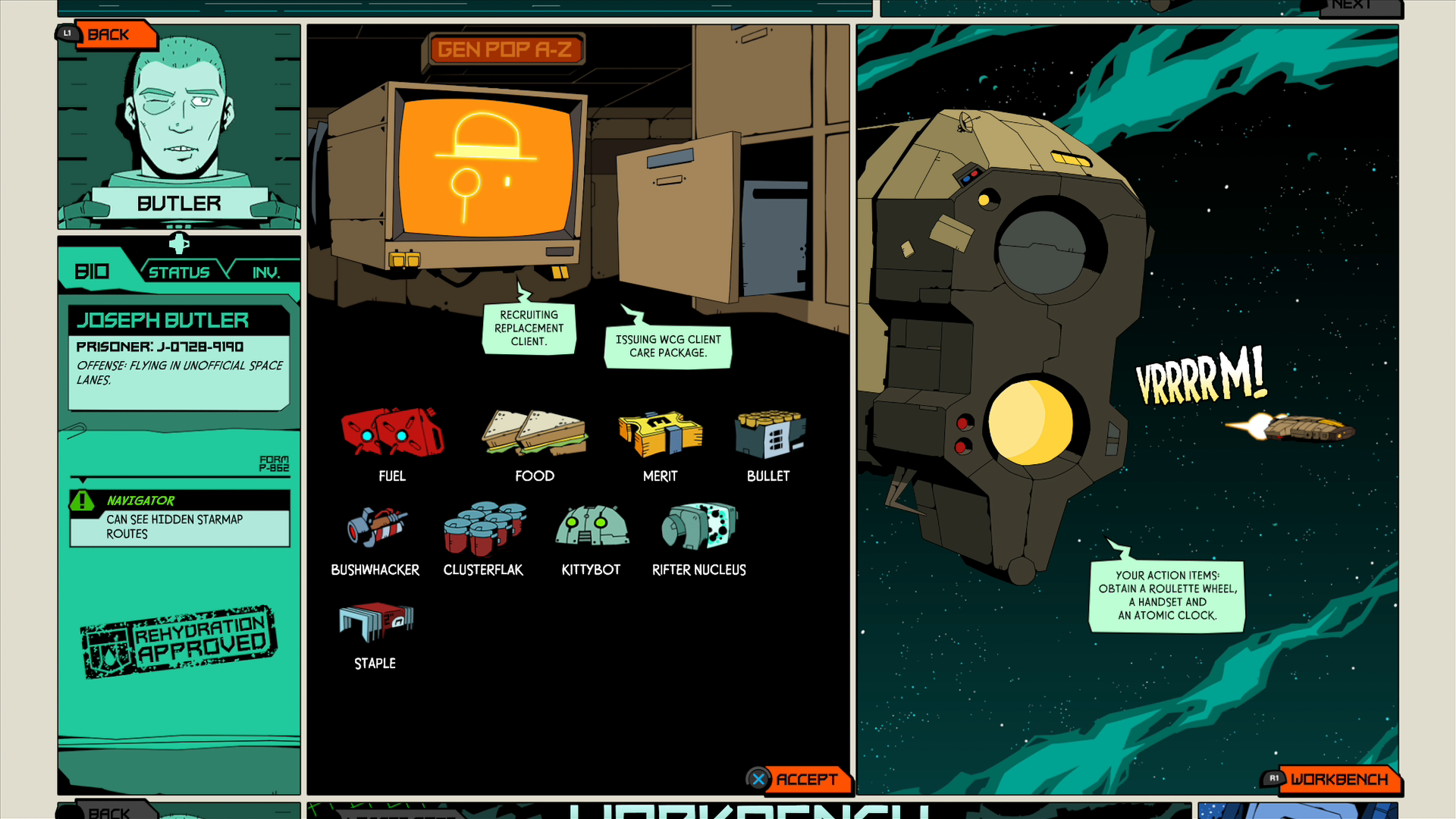 Because of how you're constantly pushing forward in the regular modes, Void Bastards feels like one of the easier roguelites that I've come across in recent years. The only punishment for dying is a temporary setback of crafting materials and ammunition. Starting as a new convict, you're constantly given a stipend of ammo, fuel and food to start your journey (and the amount can be upgraded to be more generous). Unless you're playing an Ironman run with no deaths allowed, failure is only a temporary setback. Sure, your next convict might have a chronic cough but that can be fixed with the right exploration and gene therapy from the medical ships. If you do want a stronger challenge to Void Bastards, there are unique challenges and even a higher difficulty setting to limit what abilities are permitted. However, if you just want a casual playthrough on the normal difficulty, Void Bastards has just the right amount of challenge early on and becomes far more accessible the deeper into the tech trees and nebula you go.

As far as Void Bastards goes in terms of difficulty, I found it to be one of the most fair roguelites out there. Enemies don't suddenly get more powerful just because you found another upgrade (they instead power up the deeper into the nebula you venture) and most encounters can be dealt with in stealth and delicate touches rather than going guns blazing with your limited ammo. It's a charming introduction to much more in-depth roguelike action games but with enough comic charm to stand up all its own.

Reviewed on PlayStation 4 (code provided by the publisher). You may pick up the game for PC at 10% off via Fanatical.

Void Bastards is a roguelite puzzle game that just happens to give you a gun and two cheese and onion sandwiches before sending you out to your doom. The beauty of Void Bastards is learning how to be more efficient without having to be more deadly.