The Last Stand: Aftermath Review – A Race Against the Clock

The Last Stand is one of those series I grew up with. I'm pretty sure there's a lot of people who played the iconic series by ConArtist Games on their browsers back when Flash was a thing. It was one of those games that made you realize that Flash games could be way more than just "snack games." Well, at least that was the case until the series slowly tumbled down and became Zombie Survival FarmVille.

It seems like ConArtist Games wasn't going to allow The Last Stand to go out disgraced. As such, a new entry in the series was created published by Amor Games Studios. With it, the iconic series would leave the browsers and evolve into the next-generation console and PC. Thus, we now find The Last Stand: Aftermath, a game that in my opinion is a return to form which brings the best of the first three entries of the series while pretending that Dead Zone never happened. 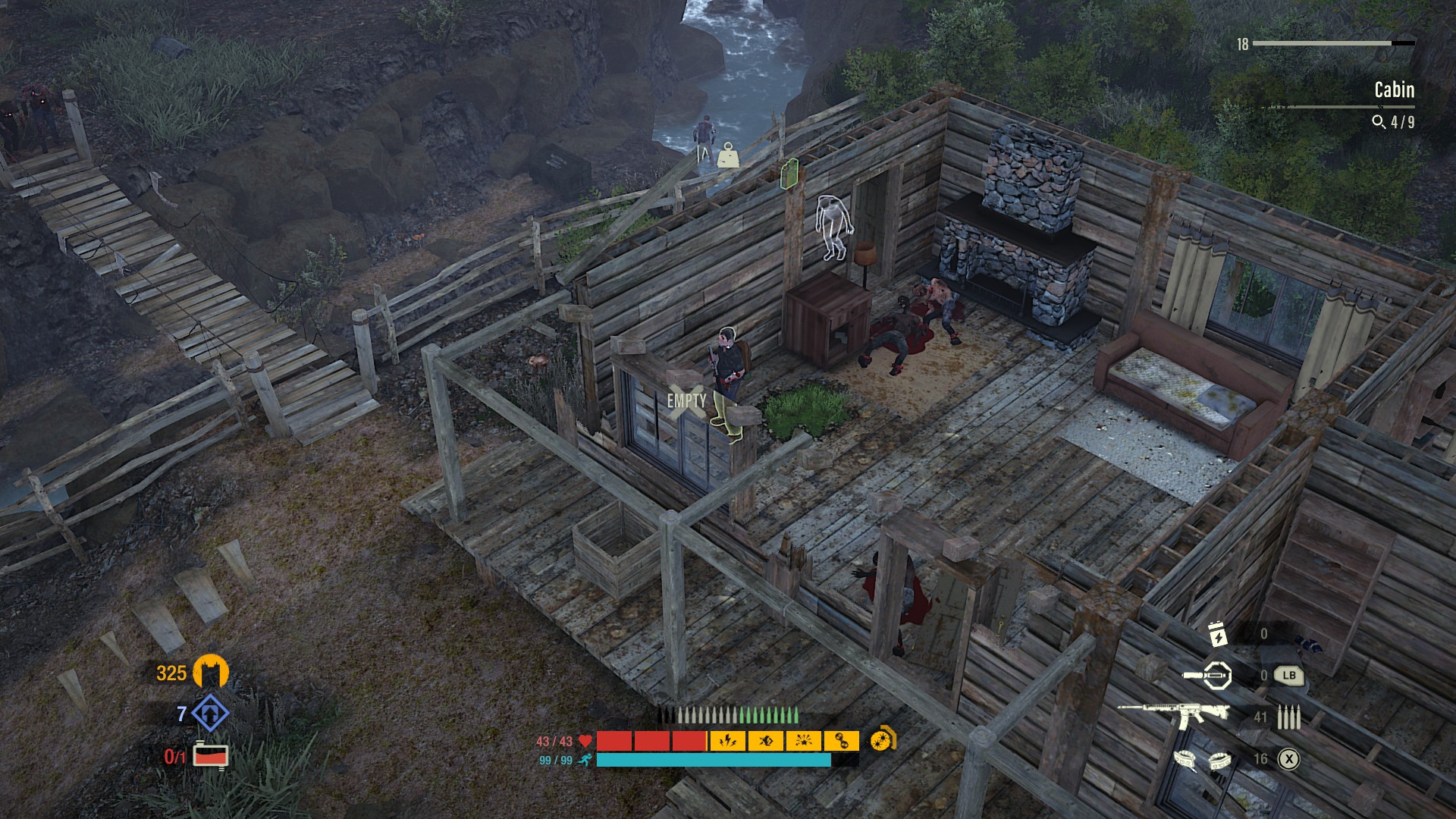 The Last Stand: Aftermath takes place sometime after the events of The Last Stand: Union City. A virus ravaged over the entirety of Earth, and it left the world a desolate hell where zombies are a common sight. The last few survivors holed up inside the Dead Zone and made their -ahem- Last Stand in what's known as The End.

Soon enough, the residents of The End are joined by survivors that aren't precisely healthy. They have already been infected, and the infection will eventually overtake them. With nothing to lose, these survivors set off into the unknown to find supplies for the Survivors in The End, gather intelligence around the Zombie virus, and ultimately die so another infected survivor continues right where they left off.

Yes, this is the main mechanic that you'll be facing in the entirety of your playthrough. The Last Stand: Aftermath is a roguelike survival game. The main goal is to get as far as you can before inevitably dying, be it from the onslaught of zombies coming after you or by being consumed by the infection itself.

The pressure is on you the moment you leave The End to explore the unknown. Each second your infection is growing within you, making you permanently lose precious Health Points and turning you into the monster you're going to be. It's up to the player to make the most out of the situation and complete objectives in a procedurally generated world where there will be many tense moments, split-second decisions, and death.

The Last Stand: Aftermath Review – A Race Against the Clock 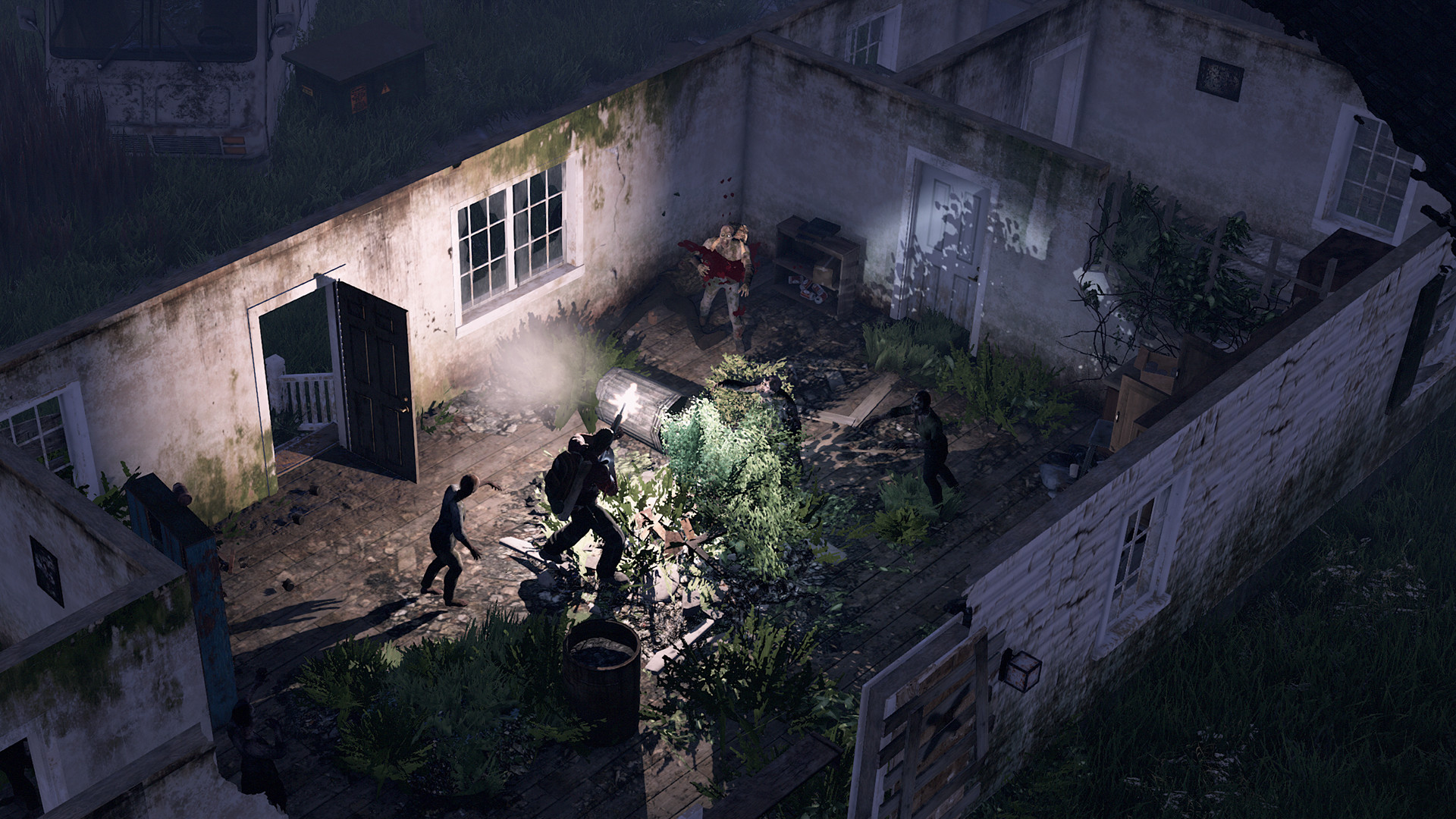 The Last Stand: Aftermath plays like a twin-stick shooter in an isometric environment. You move around with the left stick, aim with the right stick, and shoot with the right trigger. Thus, playing this game with a controller is recommended regardless of whether you own it on PC or consoles.

In the game, you have to travel a set amount of locations before reaching what essentially is a checkpoint between one area to another. On your way to the checkpoints, you might find yourself taking a Detour to further expand on the game's story while doing set missions. Don't worry, though. Once you beat the Detour section, it won't pop up again or interrupt your run in subsequent runs.

You barely have anything good to work with (most of the survivors you play as tend to start their adventure with a broken gun, a blunt weapon, and some item). So, the first thing to do is scour through each of the game's levels to gather as many resources as you can. Be it fuel for your car, ammunition for your guns, or medical supplies to restore your dwindling health and Stamina.

The game is NOT going to be friendly toward you. More often than not, you'll find yourself facing off against hordes of zombies ready to tear you down limb by limb. You have to make several split-second decisions and gauge whether or not it's worth exploring the area you're in to collect supplies or save them for a later section. 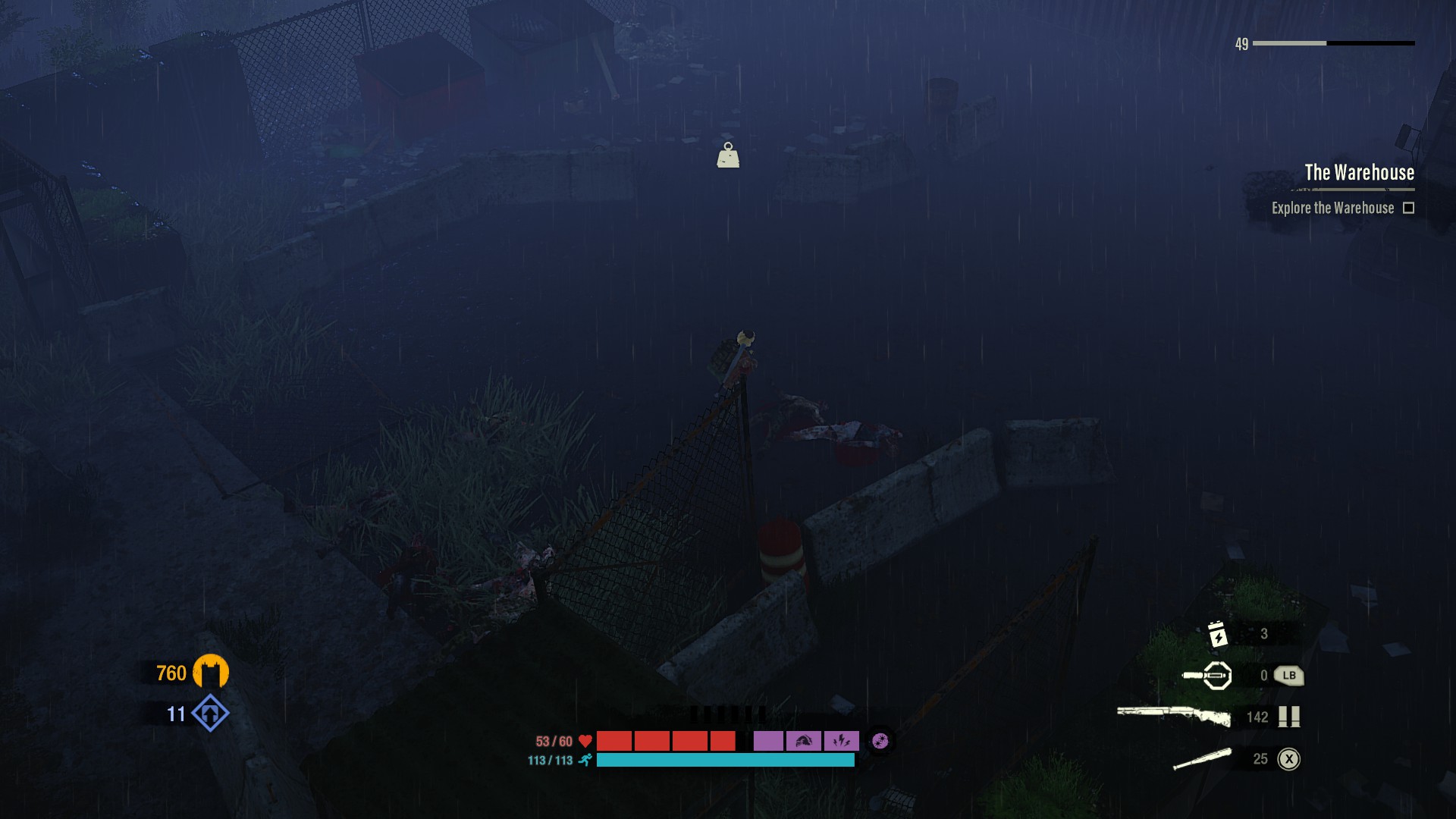 As mentioned before, your resources are always limited too. Guns need ammo (and they need the correct type of ammo. You can't just fit a .45 caliber shell on a rifle, my guy); blunt weapons have a certain durability threshold and will break; And, on top of all that, you also have the weight of each item you carry in your backpack, which will negatively affect your Stamina if you bring too much weight. At least that's what the game wants you to think, anyway.

In all my runs, I never once found myself majorly inconvenienced by the penalty of being overloaded with items. Sure, you can take Stamina damage, and carrying too much will reduce your max Stamina. But the game constantly attempts to screw me over with Stamina-regeneration items that I end up healing said damage before it becomes a significant issue. It doesn't help that using Stamina meds doesn't take long as opposed to other healing items. So, any major downtimes I have are spent putting Stamina back to full (since the Stamina loss isn't permanent, unlike HP, which is lost to the infection) and healing in general.

I'd say that the primary concern in terms of the resources you'll have in your current run are both Ammo and Fuel. Fuel will allow you to move onto the next area of each section, and some sites don't have fuel canisters at all, so you'll have to account for each risk and gather as much as possible.

Ammo, in the meantime, can very quickly pile up, but it won't be much use if you don't have the right gun to use it. Finding the right weapon in the wasteland will be the defining factor on how far you're going to make it through the game. Fortunately, the layouts of each area aren't that varied, so you'll often find yourself remembering where the nearest item spots are (they might be empty, though).

Oh, and by the way. If you ever find yourself thinking, "Oh hey, I just got a fuel canister for free after I just entered this house," you better start sauntering and duck because it's very likely that the house you entered in has a booby trap that will blow your head off if you run. Running indoors is more often than not like running with scissors. Sure, you might be fine most of the time, but you sure as heck don't want to find yourself in the one time you trip down and get stabbed. 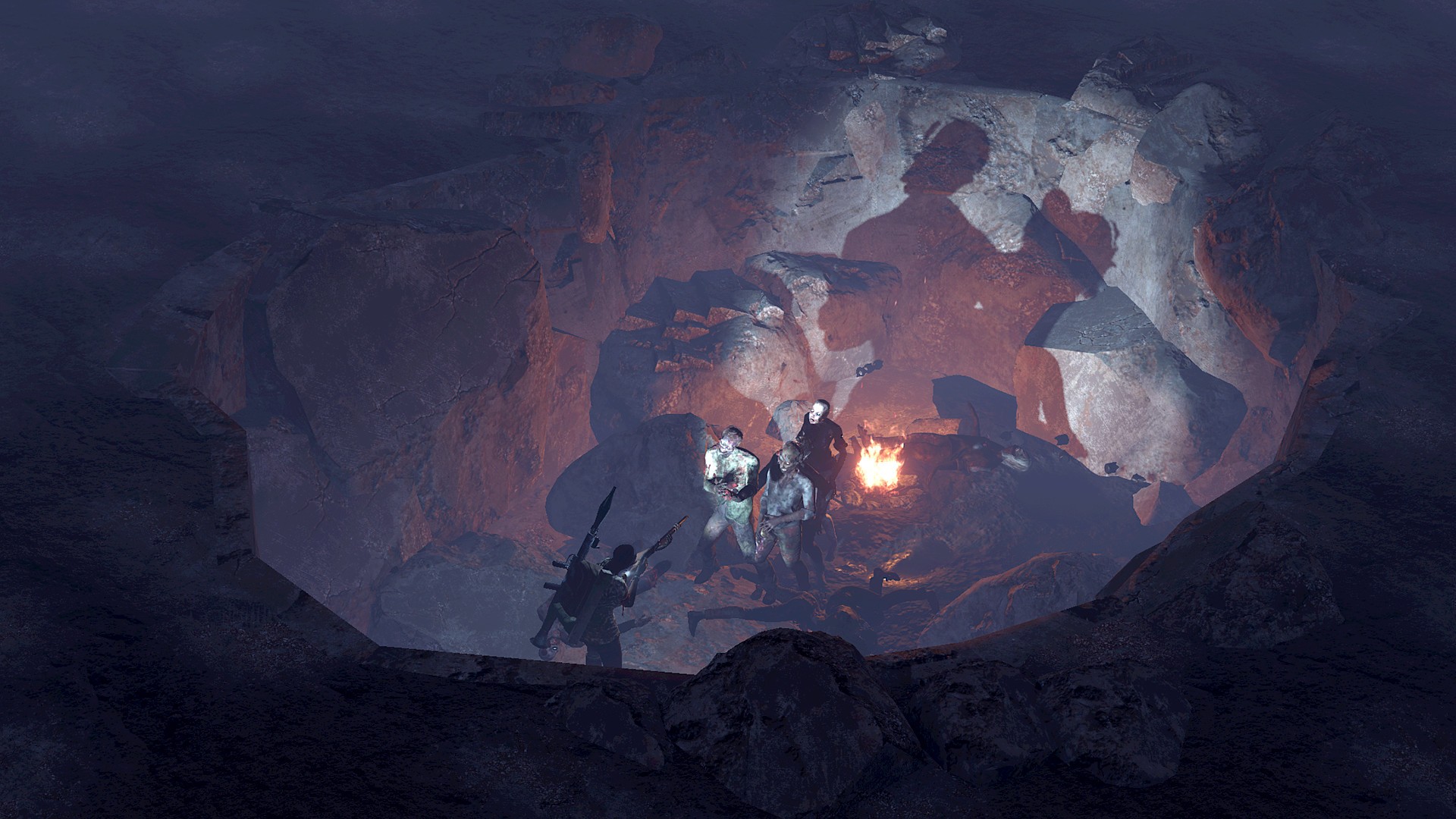 But what happens once you die? Well, this is where the Supply Points and Knowledge Points come in. Supply Points are earned by grabbing supply bags and putting them on your car's trunk, making beacons out of several Supply Caches (which is a decision between whether you keep the contents of the cache or if you send it off to The End for your future runs) and by loitering around in general.

Supply Points will give you a headstart of sorts or unlock item drops for your future runs. They can also provide you with access to ammo and weapon caches for your armory alongside other crafting resources. Much like the rest of the game, it's essential to gauge how many Supply Points you're going to spend on your next run versus how many you'll keep for other future runs.

Knowledge Points are acquired when you collect items such as magazines, journals, sketch pads, really anything from the old world. KP works in two ways, you can use it as a pseudo-currency with the game merchants that may or may not pop up during a run, or you can use it to upgrade your abilities and performance during your travel or before you set off in your next run.

I'd say that Knowledge Points are the most precious resource out of all of them. The upgrades you can get are pretty wild and can significantly influence how far you'll get in your next run. You'll have upgrades such as how resilient you can be against Zambo attacks to being able to find more ammo/health/food drops to make your experience more comfortable.

The crazier upgrades go from being able to reload much faster, getting critical hits on enemies, and the ability to carry more weapons, to almost having no issue kicking down doors, being able to find hidden supply caches, and getting more Knowledge Points so you can unlock even more upgrades more frequently. 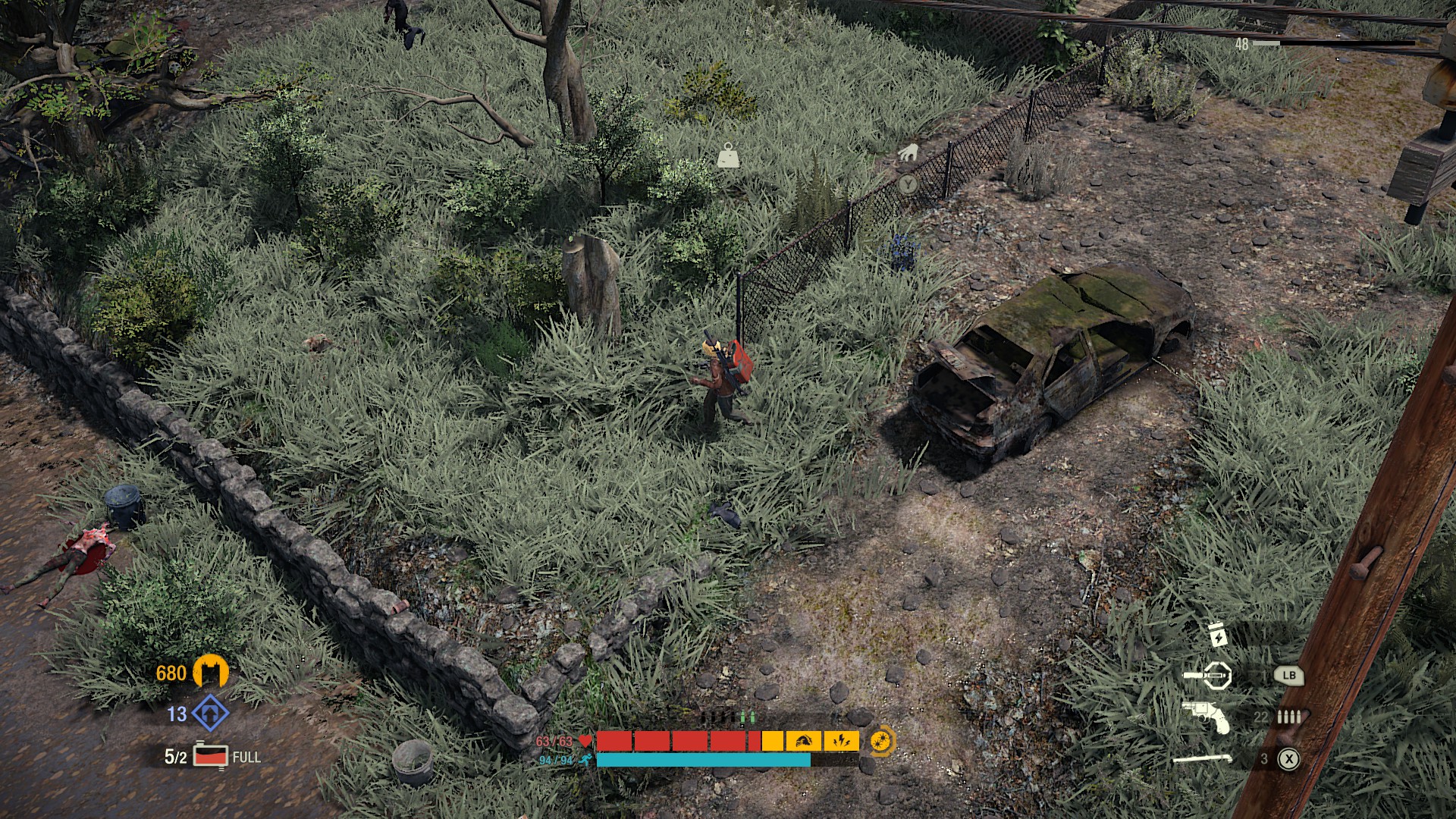 Overall, The Last Stand: Aftermath is a glorious return to form. It brings back the intense action and split-second decisions with enormous consequences from the first game, the incredible travel mechanics and varied environments from the second game, and the open-world exploration and resource management from the third game.

I love the freedom that the game provides and, despite the concept of starting again from scratch being annoying to me, it has proven to be quite addictive and fun. Every time I run through the game, I have a fantastic experience that more often than not entices me to go further and see how far I can go this time.

It's a challenging experience for any fledging roguelike fans out there. The game is not going to show any mercy and overwhelm you with enemies. Thus, you will always be hard-pressed to take risks and pay close attention to your ammo and item counts. You'll never know when you'll come across one of the many different zombie types that will make your day worse.

Oh, right. That's also a thing. The game has different zombie types that inspired Left 4 Dead, making your journey more challenging. Fat zombies explode and make a cloud of poisonous gas in the process; Hunter-like zombies that pounce on you whenever they get the chance; Tank-like zombies that are bullet sponges and can hit quite hard; and more.

I could spend days singing Aftermath's praises. While it may not offer much in terms of substance and variety, it is made up for with the game's tense situations and relentless enemies that will put your aiming skills to the test every time. Also, if you miss the classic games that helped define the Flash Gaming scene, you might be happy to know that there's a bundle that includes both Aftermath and the first three games in the series neatly packed in a Legacy collection.

Digital copy purchased by the reviewer. You can grab the PC version on Green Man Gaming.

This is a fantastic return to form for the well-established series after the mess that was Dead Zone. It brings back familiar elements from the first entries in the series while using its newly implemented roguelike aspect to put players in very tense situations where the next decision may very well end in death.