There’s something fascinating about video game solo projects. From Cave Story, to Stardew Valley, to the grandaddy of them all, Tetris, there have been a plenty of great video games primarily developed by just a single person. That said, for every great success, dozens of mediocre solo projects have simply been forgotten to the sands of time. Enter The Falconeer, a high-flying adventure from Tomas Sala, previously best-known for the fan-favorite Skyrim mod, Moonpath to Elsweyr.

The Falconeer is arguably one of the most ambitious one-man projects ever made, featuring a full open-world, in-depth story, and polished aerial combat mechanics, but does the game attempt to fly too close to the sun? Buckle up, it’s time for a test flight… 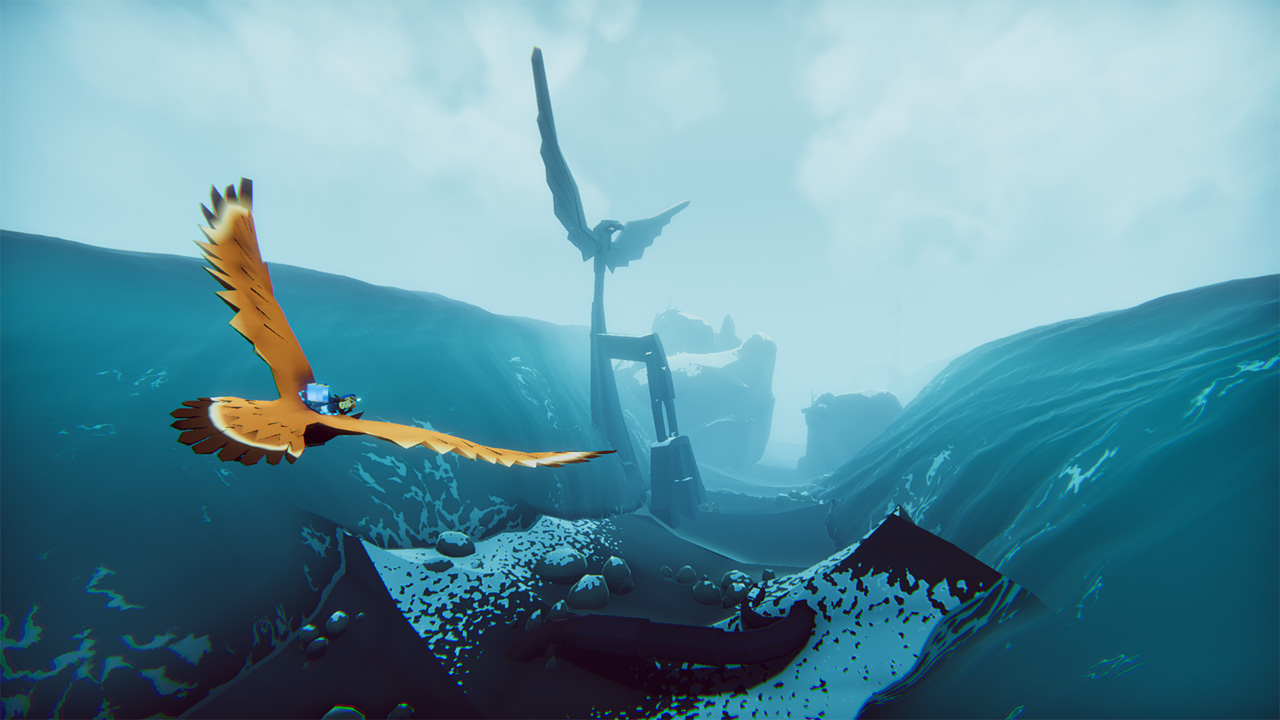 The Falconeer takes place in The Great Ursee, a watery world where various factions vie for control through the use of powerful warbirds controlled by trained riders. The game opens with the attempted assassination of the Empress of the powerful Northern Imperium. From there, you can tackle several chapters in any order you wish, with each laying out the motivation of one of Ursee’s various factions, ranging from scrappy miners to the mysterious technology-worshipping Mancer Order. It’s clear Tomas Sala was aiming for a Game-of-Thrones-style tale of political intrigue here, but he mostly just demonstrates how talented George R.R. Martin really is. The Falconeer’s characters just aren’t interesting and their various machinations are very difficult to care about. The fact that the vast majority of the story is told through bland text boxes doesn’t help matters. The game does eventually throw some more fantastical twists at the player, but by then it’s too late to spark any interest.

At least The Falconeer is rather nice looking. The game features that colorful, textureless look pioneered by indies like Journey and Bound, but it does it better than most. The oceans of Ursee are imposing, filled with interesting sights, and are often beset by impressive storms and other weather effects. The game’s atmosphere is bolstered by a properly moody soundtrack. Unfortunately, as pretty as The Falconeer is, exploration wears thin rather fast. Yes, there are cool things to see, but all you can really do is fly over them. The Falconeer is clearly inspired by The Legend of Zelda: The Wind Waker, but that game actually lets you explore every island you come to. Flying around Ursee is the equivalent of looking out the window of your plane as you fly over a city you won’t be visiting. A temporarily diverting, yet ultimately hollow, experience. 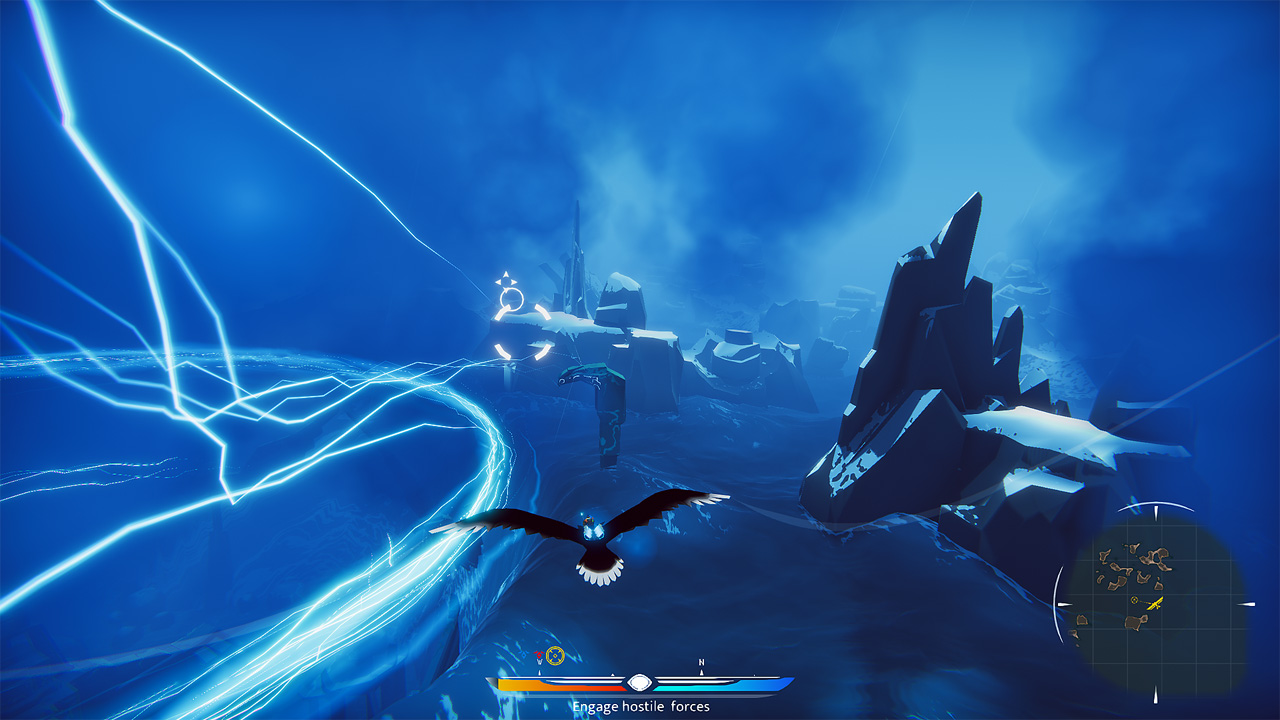 With exploration not being particularly exciting, most players will likely focus on completing missions. Unfortunately, these also grow old quickly. Most missions are of the dead-simple “fly to the map marker and fight some enemies” variety. Occasionally, you’ll have to carry a key item or escort a ship, which are both irritating in their own way. Items can be hard to find amongst the waves if you’re forced to drop them and ships move much more slowly than your eagle, so you have to continually circle around them.

Admittedly, The Falconeer’s flight controls and combat are solid enough. Building and maintaining your eagle’s speed takes some getting used to, as you can only build up your boost gauge by diving downward toward the water. If you fly upward, your boost gauge will decrease, although you can get some elevation by riding thermal drafts. Eventually, you’ll figure out how to maintain a nice, even glide, which can be pretty satisfying. The way The Falconeer handles momentum and boosting is really the only way the game drives home that you’re playing as a bird, rather than just a generic aircraft or spaceship. 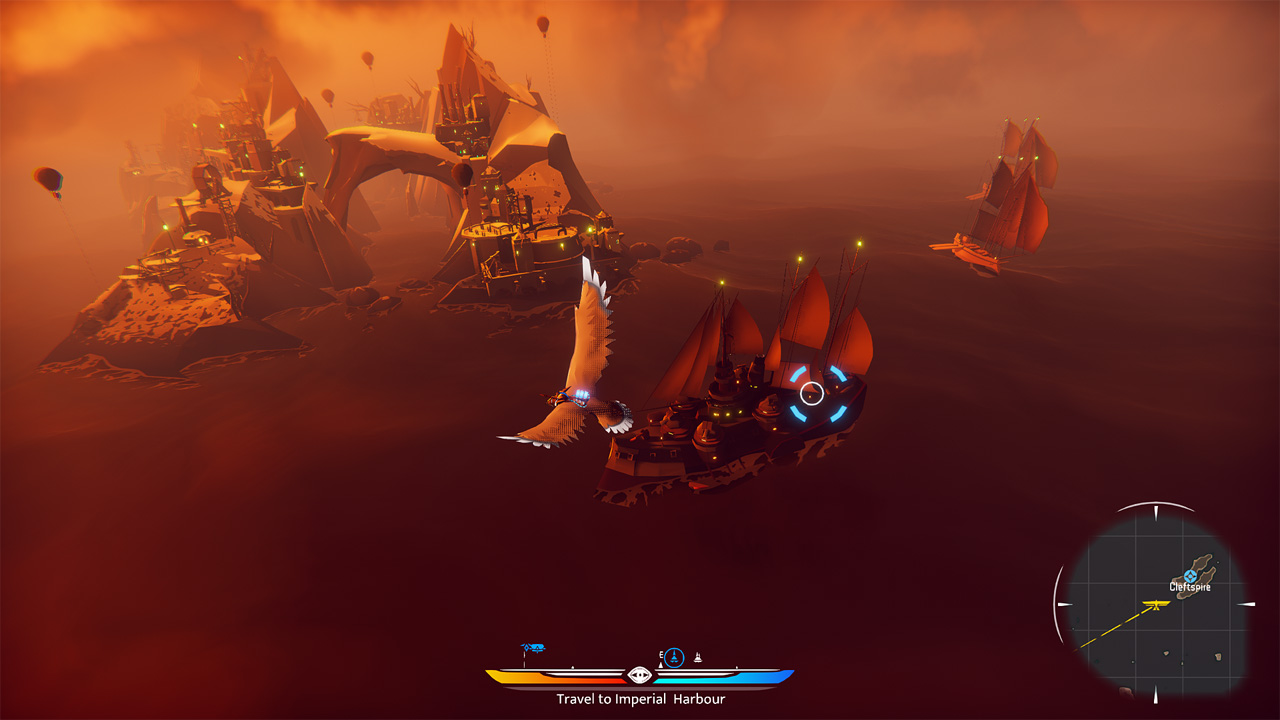 Aside from the gliding mechanics, The Falconeer is a fairly standard aerial combat game. You blast bad guys, barrel roll to evade incoming shots, etc. It all works well enough, but battles never feel particularly intense. There is a decent variety of enemies, ranging from rival eagles, to airships, to killer beetles and dragons, but they all require more or less the same strategy – just shoot ‘em until they’re dead. Perhaps I’d be a bit more forgiving of The Falconeer’s combat if the game had come out six months ago, but compared to the recently-released Star Wars: Squadrons the action just feels limp. Yes, you can upgrade your eagles with new weapons and other upgrades, but nothing really changes the core combat experience. The battles you have at the beginning of the game feel largely the same as the ones you have at the end, with the number of enemies being the only real differentiating factor. 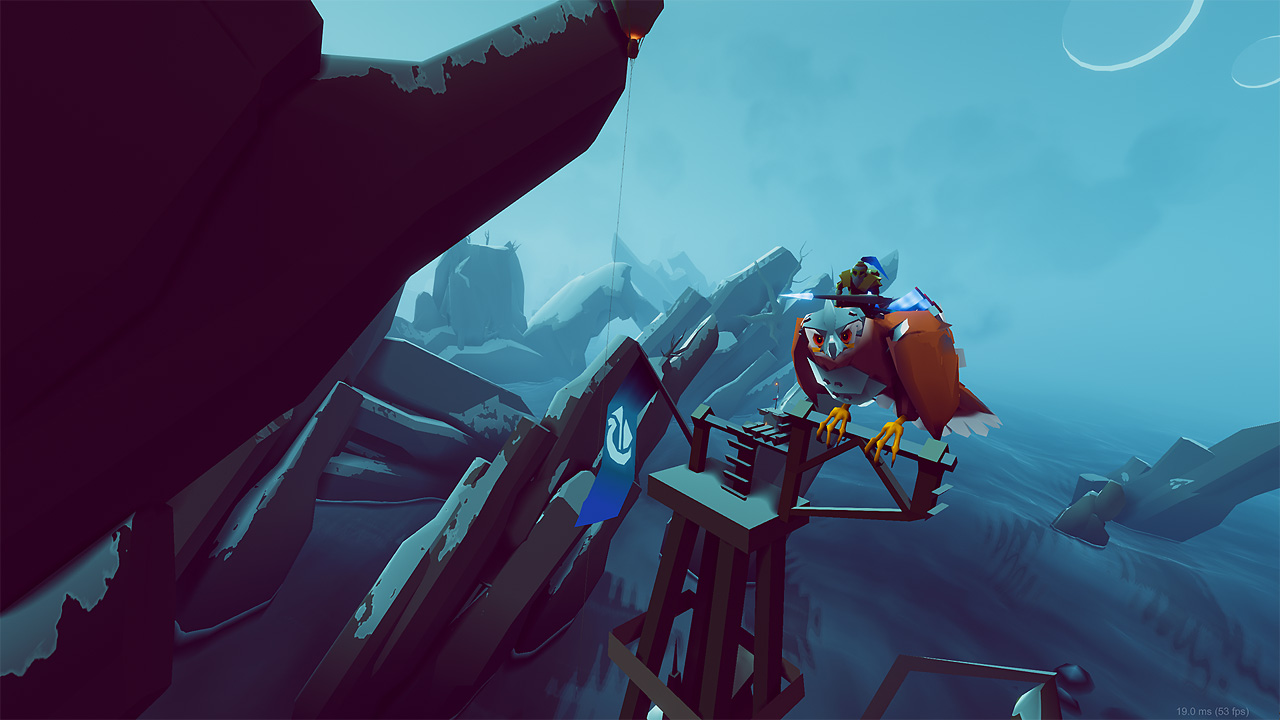 The Falconeer is a decent-length adventure, clocking in at around 10 to 12 hours. There is also plenty of side stuff to pursue, although I’m not sure how many players will be interested. Personally, I was more than happy to flap off into the sunset by the time the credits arrived.

This review was based on a PC copy of The Falconeer provided by publisher Wired Productions. You can grab the game at a discount via Green Man Gaming.

The Falconeer doesn’t do anything glaringly wrong, and yet, the overall experience doesn’t really click. The game looks lovely, controls well, and offers surprising depth considering it was created by a single developer, but an uninvolving world, repetitive missions, and combat that isn’t as visceral as it should be grounds its potential. Like many flights, The Falconeer is kind of exciting when you first take off, but by landing time you just want the experience to be over.