The Star Wars brand naturally lends itself to certain genres, and for years, space combat games were a core staple of the franchise. The Rebel Assault, X-Swing, and Rogue Squadron games kept wannabe pilots busy throughout the 90s and early-2000s, until, suddenly, the genre flew off to parts unknown. It’s been over a decade (closer to two decades really) since we had a major new Star Wars space shooter, but Motive Studios' Star Wars: Squadrons has formed up to fill the void.

Of course, maybe there’s a reason the various Star Wars space combat series all exploded into fiery wreckage. Perhaps this kind of thing just doesn’t fly anymore? Does Star Wars: Squadrons recapture the excitement of classics like X-Wing or Rogue Squadron or is the pew-pew genre permanently past its prime? Grab a helmet and strap in, because it’s time to find out…

Star Wars: Squadrons takes bits and pieces from various space shooters, but it’s most obviously inspired by the X-Wing and TIE Fighter games of the 90s. Like those games, Squadrons is played in first-person from inside the cockpit of various Rebel/New Republic and Empire ships, including (of course) X-Wings and TIE Fighters, as well as other favorites like A-Wings, Y-Wings, and TIE Bombers. There’s no option to play in third-person or take away the cockpit overlay, which some will applaud. Personally, while I get what Motive is going for, and the cockpits are all lovingly detailed, having as much as half the screen taken up by gizmos and gauges can sometimes be irritating, particularly during frantic fights with a lot going on. This isn’t a hardcore flight sim where you actually have to know which button on your dash does what, controls are standardized across all ship types, so the cockpit is really just window dressing. Again, I understand the nostalgia at play here, but playability and options should come first.

Thankfully, quirky cockpit view aside, Star Wars: Squadrons does play pretty well. Controls are responsive, although the standard layout is a little odd, with speed and rolling controlled by the left stick and aiming controlled by the right stick (I reversed that and immediately had a much better time). Battling your way through missions and hunting down fighters is made fairly painless with a targeting system that lets you focus on things directly ahead of you, cycle through objectives/enemies, or instantly focus on whoever’s on your tail. It all works well…until it doesn’t. Sometimes during particularly complex missions, you’ll find yourself madly cycling through targets in the midst of battle as the game decides it’s more important to focus on an ally or ship you’re trying to protect rather than the enemy right in your sights. Just focusing on what’s in front of you often doesn’t help when there’s a dozen things in your field of view. Targeting isn’t an issue 90 percent of time, but when it breaks down, Squadrons quickly goes from fun to maddening.

Beyond the basics, Star Wars: Squadrons allows for some strategy, as you can reallocate power to your ship’s engine, weapons, or shields on the fly. Learning when to do so is the key to high-level play. Before each mission or multiplayer battle, you can edit your ship’s loadout, and in addition to your basic blasters, you can deploy various auxiliary weapons, including bombs, missiles, ion blasts, and turrets. Overall, each of the game’s eight ship types feel unique and like they have their own purpose in battle. You’ll definitely develop your favorites (I’m an A-Wing and TIE Bomber man).

Star Wars: Squadrons features a full-fledged story mode, set after the events of Return of the Jedi as the Empire splinters and crumbles and the New Republic struggles to establish itself. The story revolves around Lindon Javes, a former Empire captain who defects to the Republic side in order to help them build a new giant battleship called the Starhawk. Lindon is opposed by his former squadmate Terisa Kerill, who really took his defection personally and will now do anything to destroy the Starhawk. It’s an interesting setup, but the game doesn’t really do much with it. Don’t expect any big twists or turns or real examination of the morality of the Republic essentially building their own Death-Star-style superweapon. That said, the little chats you have with your squadmates between missions are engaging enough. This is also the rare Star Wars story that actually focuses on the war – the battles, strategy, and scheming. I never found myself emotionally invested in the Squadrons’ story, but I was still engaged.

Story mode objectives vary widely, from relatively-basic dogfights to large-scale battles, stealth missions, and elaborate multi-stage operations that bring to mind the destruction of the Death Star and other memorable set pieces from the movies. Everything is generally well-explained and checkpoints are placed generously so no one chunk of a mission feels too daunting. Unfortunately, not all of Squadrons’ missions are created equal. The game’s final battle is a bit of an overstuffed mess, and another mission that involves detonating mines to destroy an enemy fleet forced me to put down the controller for a few minutes in frustration.

One thing all of Star Wars: Squadrons’ missions have in common, is that they look great. From the clouds about Yavin, to a debris-filled Imperial ship graveyard, to the kaleidoscope of color and electricity that is the Zavian Abyss, every location in Squadrons is bright, detailed, and beautiful, particularly on an HDR-capable screen. The game also maintains a mostly smooth 60fps on both PS4 and PS4 Pro (it ought to, with half the screen taken up by the cockpit).

Of course, multiplayer is a must for any good space shooter, and Star Wars: Squadrons mostly delivers on that front. Basic 5v5 dogfights are a ton of white-knuckle fun, although the more complex Fleet Battles are somewhat disappointing. Taking inspiration from EA’s own Battlefield and Battlefront games, Fleet Battles are multi-stage assaults, which task teams with defeating their opponents’ fighters and cruisers en route to taking on their big capital ships. It doesn’t feel like there’s much strategy to Fleet Battles, with momentum flip-flopping back and forth with little explanation, and the whole exercise takes way too long, with single matches lasting as long as half-an-hour. But again, basic dogfights are fun! I just wish there were more multiplayer maps – Squadrons only launches with six maps, and at least a couple of them, like the visually-confusing Nadiri Dockyards, are duds.

Ultimately, what I think I’m really missing is a focused co-op mode. Sure, dogfights and Fleet Battles are technically 5v5 affairs, but you’re pretty much doing your own thing. Star Wars: Squadrons is not a live service game, and the lack of microtransactions and other money-grubbing is certainly refreshing, but I do feel like the game is in need of some kind of post-launch content. Hopefully, Squadrons sells well enough to at least justify a few new maps and multiplayer modes.

That said, Star Wars: Squadrons still serves up a pretty decent amount of content for its $40 price tag. The story mode is around six or seven hours long, with additional medals to earn, and even casual pilots will probably spend at least that long on multiplayer. Yes, this is a narrowly-focused game, but sometimes it’s best to keep your eye on the target.

This review was based on a PlayStation 4 code of Star Wars: Squadrons provided by publisher Electronic Arts. 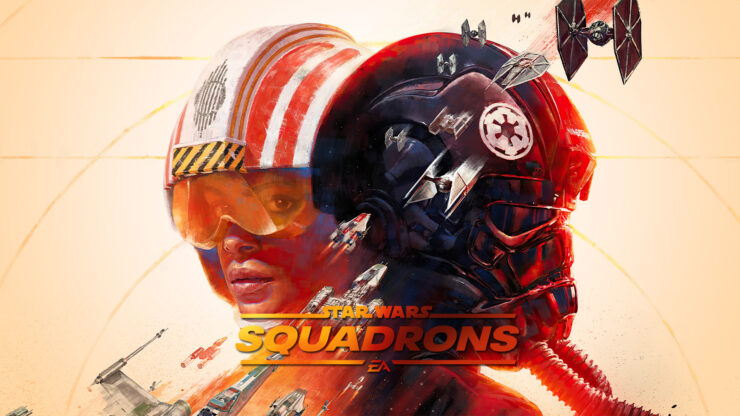