Mars doesn’t get a great reputation in video games. Whether it’s being invaded by demons, oppressed by an authoritarian earthling government or serving as the unfortunate setting for The Technomancer, Mars is normally an inhospitable red dusty death trap. But in Surviving Mars’ newest DLC, aptly titled Green Planet, the red planet gets an interesting makeover.

Surviving Mars, which originally released about a year ago, is a real-time management game where you have to shepherd humanity into the stars and establish a thriving colony on the nearest celestial neighbour. There are a thousand ways for it all to go wrong, from malfunctioning air infiltration to disastrous dust storms. But in Green Planet, the normally deadly planet becomes a little friendlier.

The base game of Surviving Mars is a game that has easily defined milestone that you are always working towards completing. When you start you’ll have nothing but a few slightly upgraded and far less lonely Curiosity robots and your first mission to refuel the cargo rocket to send it home. After a couple of hours, you’ll hopefully have a decent fuel supply and your new goal will be about boosting production and starting to develop the basics needed for life.

After that, you’ll be welcoming your first colonists on the red planet in their bespoke and hopefully life supporting domes. From there you’ll be building up your township and developing your research and mining capacities.

Each of these milestones feels different, requiring different focuses from the player, but they also have a profound effect on the world of Surviving Mars too. To start with you are barely a blip on the map, but soon enough you’ll see huge industrial production lines and clean human filled domes.

Green Planet tacks on more goals on the endgame, giving you new things to reach for once your colony is running as smoothly as possible. In this case, Green Planet is all about terraforming. While you might get used to having the only green pockets of the game trapped inside glass domes, with a bit of effort you can turn the red planet fifty shades of green (and blue).

It’s not something that new players will have to worry about, other than a few extra numbers at the top of the screen, but late games can start to repurpose their colonies to make the entire planet habitable. This means new buildings and a few long term goals that seem a little counterproductive on the face of it. For example, to make Mars warm enough the atmosphere has to be thickened up, which you can do by pumping vast amounts of carbon dioxide in the air. While that would encourage life on the red planet, please don’t try that at home.

You’ll also have new expeditions that can greatly improve the red planet's prospects, with some risk. For instance, I ordered several ice asteroids to be crashed into the planet to kick start its water table, but it did cause some fairly devastating Marsquakes which my colonists weren’t too fond of, to say the least.

Seeing color blossom across the planet, with forests, lakes and oceans all flourishing across the planet's overview is a great way of tracking your progress and really feels like you’re reaching these extremely ambitious goals.

Green Planet doesn’t add anything too different from what Surviving Mars offers. The game already kept itself feeling fresh through hours of games, and the DLC keeps that up too. The added goals work really well for adding several more hours of keeping things running and developing your specialised collection of strange buildings and domes. The new loading screens are lovely aspirations too, with beautiful vistas of green fertile grounds. There are a few little issues here and there, the occasional hiccup on the soundtrack can give you a surprise, while the mostly automatic drones can occasionally work against your aims sometimes. But having said that, playing a game that focuses on bringing life to a planet rather than death is refreshing in itself, with plenty of emergent moments of chaos and stress to keep you on your toes.

Reviewed on PC (code provided by the publisher). You may purchase Surviving Mars: Green Planet via Green Man Gaming (currently with a 12% discount), though remember that you'll still need the base Surviving Mars game as well. 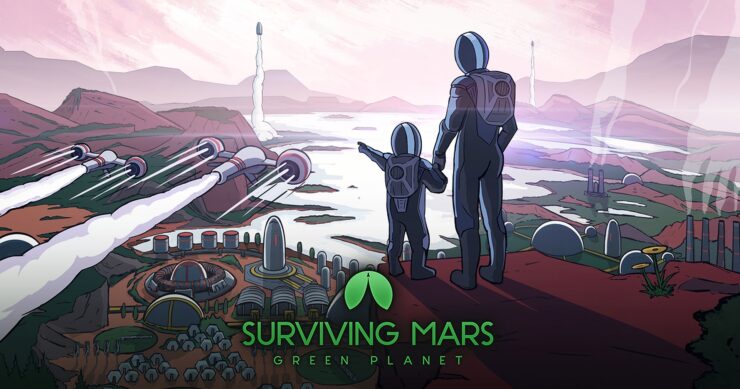 Surviving Mars is a management game that's really simple to pick up but hard to put down, and Green Planet continues improving on the tested formula.