Last year Super Mario Maker launched for the Wii U, and it’s only fair to say that the game was a smash hit. The classic 2D Mario creation tool captured the imaginations of thousands, evidenced by a massive selection of original levels created by users that you can download and play online. Now that same game is making its way over to 3DS, with a few tweaks. Is it still an absolute essential? Well… No.

Super Mario Maker is, essentially, a level creation tool for 2D Mario stages. You can flick between four styles of Mario (Original, 3, World and New) and a variety of backgrounds and stage music. From there level creation is a simple matter of dragging and dropping various elements onto the stage. Floor first, blocks to jump over, enemies, etc. The sheer number of options is truly staggering.

With Super Mario Maker, you can create incredible levels. Scenarios that are simply unimaginable for a mainline Mario game are available here. A long marathon run with several Bowsers standing in your way? Doable. A short underwater stage following a coin trail? Easy as pie. Levels that play themselves? It’s all totally possible!

To add to that, making stages is easier than ever. Yamamura and Mashiko are here to help – one a pigeon, one a Japanese lady, both ready to help you get started with creating great Mario levels. It’s a welcome addition, though one clearly aimed at a younger audience, and it’s sure to ease younger players into the swing of creating their first levels.

One of the very first things you’ll notice coming off of Super Mario Maker’s Wii U big brother is that everything feels a bit cramped. Perhaps this goes without saying, but I didn’t expect the 3DS’ smaller screens to impact the way the game felt to play. The game keeps the Wii U’s widescreen, zoomed-out perspective, though when this is translated to a smaller screen it feels remarkably squashed. Mario looks smaller and stumpier than he ever has, almost dwarfed by the sheer screen real estate – it all makes sense on an HDTV, but it looks a bit absurd on the minuscule 3DS.

The second thing you’ll notice is somewhat heartbreaking, honestly – Super Mario Maker 3DS doesn’t allow you to search for and download stages from the Internet, and some stages won’t be compatible whatsoever – usually ones which feature a Mystery Mushroom, which is missing from this 3DS release. Whereas in the Wii U version you can sift through and choose stages you like best from community ratings, in Super Mario Maker 3DS playing stages from the Internet is dictated by the 100 Mario Challenge – a random selection of stages which you can bash your head against until you become champion.

It feels stripped down, honestly – the freedom of choice in the Wii U original is completely unmatched, and the decision to remove these features in the 3DS version is bewildering – it was likely to address the fact that, while on a commute or journey, you’re not likely to be connected to the internet. Still, lacking these features feels like a massive deal to me, one I personally lament.

A nice addition, however, is the Super Mario Challenge – 100 stages designed in-house by Nintendo, many of them feeling familiar or completely fresh. 100 stages is a lot, more than you’d find on many actual 2D Mario titles, so the value here cannot be understated.

To make up for a lack of online features there is a selection of 3DS-exclusive sections to get your teeth into. One of which is StreetPass – the 3DS feature which shares stages with people you walk past. This is a bit of a mystery, as your success with this feature will depend heavily on where you live. The idea of being able to share stages I’ve made with people in my local area is great, but at the same time, do I really want to be limited to the stage creation skills of the people I walk past? Honestly, I don’t get enough regular StreetPasses as it is these days, and if this is supposed to be a major feature of the 3DS version of Super Mario Maker I can’t say I’m massively enthused.

But other than all of that, how does it feel on the 3DS? Pretty good – but, then again it’s just Mario, right? The New Super Mario Bros. series started on the DS, so it should feel great on a handheld, and given that the 3DS has a touch screen, stage creation should feel natural. If I had to nitpick, I’d say the smaller screens make you squint while making stages sometimes, and there’s a two to three second black screen when you flick over from creating a stage to playing a stage, but other than that, it’s just like the Wii U version, and just as good.

Super Mario Maker for 3DS is a great handheld adaptation of a brilliant console game – though the loss of being able to search for and sort courses online is completely heartbreaking. Some people will adore being able to play Super Mario Maker on the go, but the loss of online functions breaks my heart more than I can even express. A great game still, but with a key feature stripped out it’s harder to justify a purchase, especially for those tempted to double-dip. 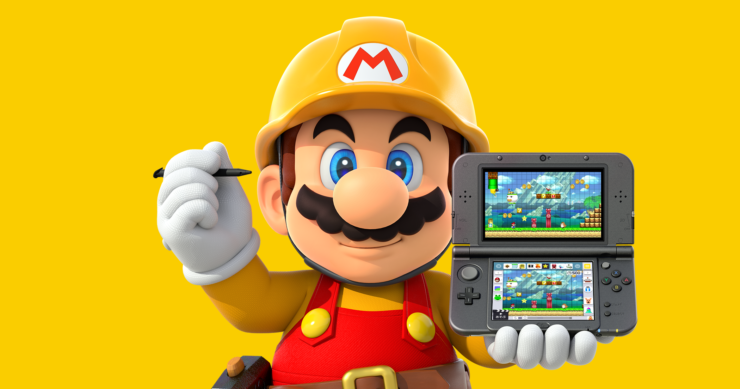 Super Mario Maker is a great game, but this handheld version is missing a couple of features that made the Wii U version essential. Loads of fun to be had, just far too familiar.