During the first quarter of the current financial year, I covered the fact that Nintendo (TYO:7974) outright smashed analysts targets. This was primarily driven by sales of the Nintendo Switch, which remained strong, as well as the consistently successful software sales. The word consistent can still be applied to software sales now, though the picture hasn't been as good as some would have liked it to have been.

Nintendo's earnings report shows an operating profit during the second quarter of ¥30.869 billion, a 30% year on year rise, this is on the back of ¥220.748bn of revenue, a rise of less than ¥1bn or 0.03%. This slowdown marks a notable drag on the current financial year for the company, with the first half now showing net sales of ¥388.9bn, a 4% YoY increase. Profit, however, remains high at ¥61.4bn, a 53.7% YoY increase. The issue from the quarter comes with profit lagging behind estimates, according to Reuters, of around ¥36.6bn.

Software sales aren't lower in the second quarter than the first, which is a positive. However, looking at 6-monthly YoY comparison, they're lagging behind. Over the previous six months, 6.27 million units of software were sold for the 3DS family, compared to 13.82 million last year. The Switch, however, has almost doubled from 22 million units to 42 million units. This is telling of the age of the 3DS family of devices while showing the expansion of the Switch.

However, of these items 11.34 million, or roughly a quarter, were first party (Nintendo developed and published) items. Third party software does generate revenue, but significantly less than first party software. The new first party titles were Mario Tennis Aces and Donkey Kong Country: Tropical Freeze, generating 3.83 million sales in total. Current top-selling Nintendo software can be seen on the sales unit page. Worth noting is the fact that first-quarter sales of these two games amounted to 2.78 million, over three-quarters of the total. 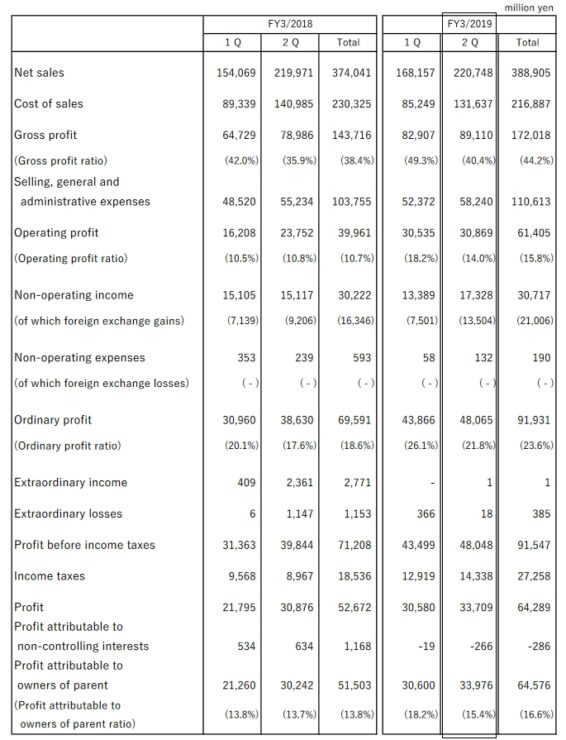 Hardware sales, on the other hands, have slowed down significantly on a YoY comparison. Over the six month period, the 3DS family has sold 1 million units, compared to last years 2.86 million. Two-thirds of these were sold in the second quarter. Switch sales, on the other hand, have seen an increase from 4.89 million last year to 5.07 million this year. I can also count myself as one of these sales.

Predictions for the Switch, despite the current figures, stand at 20 million for the financial year. Nintendo is, likely, hoping for a huge increase over the Christmas period.

Q3 - Likely to Reverse the Trend

Indeed, as the header says, this limited number of first-party software sales is almost guaranteed to be reversed in the current quarter. Why? Because three of Nintendo's biggest IP's, Pokémon and Super Smash Bros., will see a release in the form of Pokémon: Let's Go Pikachu, Pokémon: Let's Go Eevee, Super Smash Bros. Ultimate and New Super Mario Bros. U Deluxe. Each of these titles are guaranteed to sell in the millions.

As I have just said, it is also highly likely that Nintendo has plans for the Christmas period, including a deal on the Nintendo Switch console. At a discount, it could make for a very strong gift over the holiday period and significantly increase sales figures. While I do expect that both the consoles and software will see an increase, I don't imagine it will be enough to let the Switch reach the 20 million target.

Nintendo has covered their expectations and the lack of change in their forecast by stating:

There are no changes to the financial forecast for this fiscal year originally published on April 26, 2018. On Nintendo Switch, Super Mario Party will be released in October, then Pokémon: Let’s Go! Pikachu/Let’s Go! Eevee will be released in November, simultaneously with the Poké Ball Plus accessory that expands the depth of play with this title. In December, Super Smash Bros. Ultimate will be released at the same time as amiibo for some characters who are appearing in the series as fighters for the first time. We aim to further accelerate the momentum of Nintendo Switch by continuing to introduce compelling new software in addition to the popular titles that already have been released.
For Nintendo 3DS, we will continue to leverage the platform’s rich software library and its hardware install base to further expand sales of evergreen titles. In our smart-device business during this fiscal year, we plan to release the Mario Kart application for smart devices, Mario Kart Tour, while also focusing on service operations for the applications we have already released so that consumers can enjoy playing them for a long time.

As stated, the company continues to look at the mobile market. Titles like Pokémon Go, Super Mario Run, Fire Emblem Heroes and Animal Crossing: Pocket Camp remain popular. During the current financial year, only one title was released for mobile devices, this being Dragalia Lost. The only major downside with Nintendo's move into mobile games is that it is rarely ever completely in. Pokémon Go, Fire Emblem Heroes, and Dragalia Lost are all developed by independent companies.

This inevitably limits the revenue gained by Nintendo should any of these titles ever become smash hits in the same way that Pokémon Go did. Nintendo only receives an estimated 20% of revenue made by Pokémon Go, which has generated over $2bn since launch. The upcoming Mario Kart Tour, for mobile devices, is being developed internally by Nintendo.

A Busier Future Ahead

As stated earlier, one of Nintendo's current issues is the lack of first party, hit, software for the Nintendo switch and even the ageing 3DS family of devices. The 3DS isn't likely to see this reversed, with only four titles planned to launch. The Switch, however, has a wealth of planned titles. This includes the previously mentioned Pokémon Let's Go, Super Smash Bros and Super Mario Bros titles.

It also includes Fire Emblems: Three Houses, Yoshi's Crafted World, the untitled Pokémon RPG, untitled Animal Crossing game, DAEMON X MACHINA and a number of other titles. A large number won't actually be released in the current financial year, but the wealth that is incoming paints a very positive picture for the Switch and Nintendo as a whole.