Games needn't be an over-complicated combination of mechanics and features, confusing players by throwing everything and the kitchen sink into the game in an attempt to add a semblance of depth. This isn't to say that depth is a bad thing. When done right, a deep title can offer a fantastic time that little can parallel - the CD Projekt Red approach. Skybolt Zack is going for the opposite side of the scale, doing something very particular and doing it right.

Developed by newcomers Devs Must Die - a very apt name considering the frustrations I have with my innate inability to absolutely anything in this game - and published by Green Man Gaming, Skybolt Zack can best be described as "a game". The devs like to call it a platformer where you don't have to touch the floor, a sort of rhythm-action-colour-matching mashup that would no doubt intrigue Dr Frankenstein and get him back to his own laboratory.

Describing it as a rhythm game is a little misleading since you don't have to match any sort of rhythm. The music goes along at its own pace. If you're any good at the game, you'll be far outpacing the music and could make even the bounciest and fastest of tracks feel like they're in slow motion. For that matter, even if you're not good, it can start to seem that way. The primary reason it feels like it should be described as a rhythm game is that you're taking a colour-coded queue from the screen and pressing it in time - it's just that the time here is as quick as you can.

That's because in Skybolt Zack you take on the role of the titular Zack, a person experimented on by the new robot overlords of Earth, who manages to break free and... You know, I don't actually know. There is no real story to the game. That's actually listed as a pro and, frankly, it is a pro. This isn't a game that needs a Shakespearean level of dialogue and themes. You don't like robots, they don't like you, you kill the robots and reach the end of each area, trying to reach your ultimate goal.

Zack, with his new robotic arms and other parts, can hit things hard and dash through the sky. Using these powers you will hit the colour coded robots, gates, jump-pads, rockets and more. You'll do this as fast and accurate as you can, trying to avoid taking any damage and if you're good, avoiding even touching the floor. The faster you do it, the higher a chain you build-up, increasing your range, score and more. The higher score you get, the higher rank you get, ranging from a dismal D to a superior S rank. I've yet to see an S rank, nor do I expect I ever will.

I fully appreciate and understand this, nor do I hold it against Skybolt Zack, but at times I think that it punishes the flipper-handed-freaks like me. The vast majority of the game's stages have multiple paths, replacing the traditional difficulty system found within most games. The way this works is through the paths representing a different level of challenge, resulting in the unlocking of a different stage. This is represented through the game's map (of sorts) shows a crisscrossing of pathways.

The problem I have is that I have quite literally been following the bottom levels 95% of the time. I have had an enjoyable enough time doing even this, but it's disheartening to see that I'm hardly likely to move up to the top row of stages unless I really put some time into the game. Granted, this does greatly increase the replay value of the game beyond simply replaying levels for a higher score or quicker time. In all, the game has forty-eight different stages to complete.

Part of my uselessness is because the game does offer a more complex situation than Skybolt Zack first lets on. Some of the things you'll be smashing into have little tricks up their sleeves and if you're going too quick to pay attention to anything beyond the colour, you'll find yourself hitting something that changes colours after the first hit, meaning you have to go back for more, or worse are ones that can bounce you back away from them or even damage you if hit at the wrong angle

When it comes to the bosses, which are determined by the path you have been able to take, these are also pretty damn challenging. I imagine that I had "Baby's first boss" each time as well, due to the fact that I was perpetually bottom-fragging. I wouldn't even be surprised if the game thought it was taking pity on me and just throwing out something the developers thought was so easy it couldn't be difficult. Rest assured, Devs Must Die - and you must - you were incorrect! I can make anything a challenge.

If I do have any issue it's again due to how punishing the game can be in very particular circumstances. It's awesome to see the building combo and hear the intensity of the backing tracks ramp up, the faster and more successful you are. It's a killer when you land on the floor which slows you down so much that you're hardly likely to recover, which means the chain is lost and the music may as well swap over for something found in an elevator. I understand that you need to be punished, but essentially grinding to an irrecoverable halt is too far for me.

Still, as I said at the very beginning of this, Skybolt Zack has found the thing it does and it does it right. Sure, it has a few slips in how it can punish you, but it does that because the devs are picking a fight, it's in their name. A genuinely good looking game, aided by crisp, colourful visuals and boosted by an ever-ramping collection of suitable tracks that work with the fast, frantic gameplay, Skybolt Zack isn't going to be one for everybody, but for those who like a challenge and are confident in their abilities, it's one worth trying out. 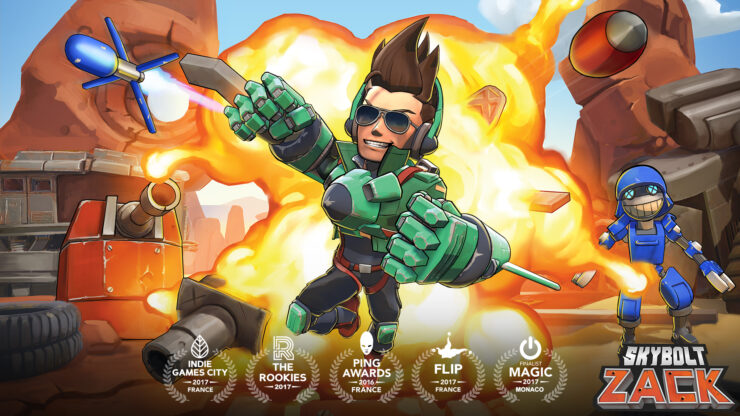 Skybolt Zack is an action-packed, engaging but all-together a little too unforgiving action-platformer-rhythm-thing. Despite its unforgiving nature, It is a game that even the most useless of people (me) will have fun with and will offer a huge amount of replayability for those looking for a challenge due to the unique difficulty system. Looks, sounds and plays great, the first outing from Devs Must Die is one well worth giving a go.