The latest drivers were used with both GPUS.  Nitro Fury = Radeon Software 16.1, GTX 980 Geforce 361.43.  We would like to thank Youtuber Brian P. (www.twitter.com/badseedtech) for allowing us to borrow his GTX 980 for comparative purposes in this review.

The AMD Fiji GPU is based on a 28nm process and is the single largest chip AMD has ever produced. The chip which measures around 596mm2 has a total of 8.9 Billion transistors crammed under its hood which means a whole lot of performance and the card really does deliver a amazing amount of improvement in performance and efficiency over previous generation GPUs. Compared to Hawaii with its 6.3 billion transistors and 5.6 TFlops of performance, the Fiji GPU crunches out 7.2 TFlops of gpu performance from the depths of its heart. Also comapred to Hawaii, AMD has managed to deliver several Micro architecture improvements along with enhanced power management features and a totally refocused look at board designs. The whole die measures a massive 1011mm2 while the interposer is designed with a 65nm process. 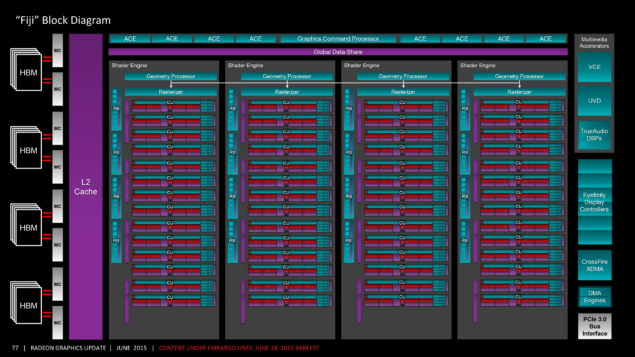 The AMD Radeon R9 Fury is the only card in the Fury series that comes with custom designs. The other two cards, the Radeon R9 Fury X and the Radeon R9 Nano are currently offered as reference only designs and while AMD has made it clear that they will have the flagship Fury X kept the same way, the Radeon R9 Nano will get some custom cooled variants in the near future. The Radeon R9 Fury is also the only cut down version of the Fiji GPU based lineup that comes with 54 compute units which pack 64 stream processors each, total of these amount to 3596 stream processors, 64 Raster operation units and 224 texture mapping units. The engine clock for the Radeon R9 Fury WindForce 3X is maintained at 1010 MHz that is clocked 10 MHz faster than the stock variant but can allow additional overclocking thanks to the better PCB components.

The texture fill rate is rated at 224.0 GT/s and 64.0 GP/s Pixel Fill rate. The card churns out a total of 7.2 TFlops of compute performance. The card also features 4 GB of HBM VRAM that is clocked at a 500 MHz (1.0 Gbps data rate). The memory runs across a 4096-bit bus interface has has a bandwidth of up to 512 GB/s. The card is powered by dual 8-Pin connectors and has a board power of 275W. Display outputs include HDMI, single HDMI and three display ports. The card has support for next generation API such as DX12 and supports Freesync, VSR and Frame Rate Target Control.