Given how massive League of Legends is, it was surprising to see Riot not capitalizing on the game's global success and popularity. It was only in 2020 that the developer revealed its Riot Forge initiative, a new publishing label that would release a variety of different titles based on the League of Legends universe.

The first game released by Riot Forge is Ruined King: A League of Legends Story, a role-playing game set in a small part of the world of Runeterra. It was developed by Airship Syndicate, the same team behind Battle Chasers: Nightwar and Darksiders Genesis. The publishing label couldn't have made a better debut, as the game is an excellent role-playing game whose only fault is being too similar to the previous RPG developed by the studio.

Ruined King: A League of Legends Story is set in Bilgewater, a city where all sorts of people go looking for a new beginning which often gets squashed down by the smugglers, thieves, and all other sorts of criminals that roam its streets. Following the defeat of Gangplank by her hands, Sarah Fortune rules the city, but things haven't changed much, as the pirate queen's rule doesn't seem to be fundamentally different from that of Gangplank. Things, however, are about to get uglier, as a new Harrowing is coming, and souls will be eaten by the black mist that comes from the Shadow Isles. And the reason why this new Harrowing is happening will challenge not only Miss Fortune's rule of Bilgewater, but will also make the Truth Bearer Illaoi face the consequences of her past actions. The two will be joined during the adventure by four more Champions: Braum, Yasuo, Pyke, and Ahri. All four of them have their reasons for getting to the Shadow Isles and joining Illaoi and Miss Fortune, making up for an improbable alliance, but one that works exceptionally well.

To be completely honest, I had literally no knowledge of League of Legends before playing Ruined King: A League of Legends Story. I only knew that the game existed and is extremely successful. But I had no trouble getting sucked into Ruined King: A League of Legends Story, as the game does an amazing job in depicting and expanding the series' lore and characters, not only via story sequences but also via documents scattered all over that delve deeper into the world's history and the customs of Bilgewater, the Shadow Isles and the other locations this motley crew will explore.

Overall, Ruined King: A League of Legends Story tells a rather interesting story, and the great pacing makes it even better, as it doesn't feature any sort of filler event just to pad out its length. Characters are also incredibly charming and well-developed, although some of them do fall into some typical fantasy tropes and they do not grow or change that much during the course of the adventure, which isn't too surprising considering they are already established characters. Their interactions are also excellent, and the optional Rest Conversations, short dialogue sequences in the vein of the Tales series Skits, provide some more information on their backstories and motivations.

Airship Syndicate didn't just knock it out of the park with the Ruined King's story and characters, but also with the gameplay, using the RPG formula featured in Battle Chasers: Nightwar and tweaking it with some features inspired by League of Legends mechanics, namely the Lane system.

Ruined King: A League of Legends Story employs a turn-based combat system where the player's characters and enemies take turns to unleash Instant Skills, skills that are performed immediately, and Lane Skills, skills that require some time before they can be unleashed. All turns are represented on the Initiative Bar, so players have a good idea of when their next turn is and when any Lane Skill will go into effect. Interestingly enough, it is possible to manipulate turns in several ways: some skills, for example, can move characters up or down the Initiative Bar, while performing Lane Skills on the Speed or Power Lane will change how much time is needed to perform them and their efficacy. Doing so is also extremely important to avoid Hazard Zones, special zones on the Initiative Bar that damage or debuff the characters whose turns are inside them, or to take advantage of Boons and Wildcards, which provide buffs.

While this system sounds a little confusing on paper, it doesn't take long for players to learn its ins and outs. It's a system that reminded me of the Grandia series, but without its real-time aspects. The game does provide plenty of guidance with tutorials and in-game guides, so players aren't left on their own as they learn this system.

What makes combat so fun in Ruined King: A League of Legends Story are the characters. All six Champions play a particular role in battle, which is reflected in their Instant and Lane Skills. Illaoi, for example, is the main healer. Many of her skills not only allow her to heal directly but also allow characters to heal themselves by attacking specific enemies that have been hit by a specific Lane Skill. On the other hand, Braum is the tank and a defensive character that can protect other characters by bestowing them a Damage Shield that absorbs damage. Yasuo and Pyke, to make other examples, are powerful yet frail characters that overwhelm the enemies with their speed and ability to debuff enemies, respectively. The customization mechanics offered by the game, which include the ability to improve skills with different properties and activate runes that grant passive buffs, allow players to come up with different builds for each character. All characters' abilities also work well with those of other characters, essentially making any party combination viable. At the start of the game, I didn't think I could go into battle without Illaoi, but once I learned how to use Braum effectively, I started winning battles against regular mobs without requiring healing at all.

Outside of battle, Ruined King: A League of Legends Story features some interesting mechanics that make exploration feel way more involved than in other top-down role-playing games. Each character comes with some unique abilities that can be used to initiate battles with an advantage, break down walls, and access otherwise unreachable areas. Locations, both towns, and dungeons are extremely interactive, with dungeons featuring some puzzles that come with a difficulty that is just right to keep players engaged without feeling frustrating. There are also tons of secrets to discover in each location, and only wise usage of the Scan ability (and of Miss Fortune's heightened Scan) will allow players to find them all. Sadly, this is pretty much the same exploration formula featured in Battle Chasers: Nightwar, so those who played the first RPG by Airship Syndicate will not be particularly surprised by the exploration mechanics featured in Ruined King.

Another area where Ruined King: A League of Legends Story excels is the presentation. The game simply looks gorgeous thanks to the combination of solid design and great visuals, which make the world feel incredibly unique and alive. Battles also look great, with highly detailed models and very smooth animations for playable characters and enemies that make them feel extremely personable. Being an undemanding game, most players will be able to enjoy its beautiful visuals without too many issues. I had no trouble running the game at 4K resolution, 60 FPS on the machine used for the test (i7-10700 CPU, RTX 3070 GPU, 16 GB RAM) at all times, but I have no doubt that even a less powerful machine wouldn't have had any trouble at all.

At the end of the day, I have enjoyed my 30 hours with Ruined King: A League of Legends Story way more than I thought I would, thanks to its engaging story, charming characters, and excellent combat system. In a year filled with many great role-playing games, Ruined King: A League of Legends Story is definitely among my favorites. I feel a lot of players will share my sentiment once they experience what is Airship Syndicate's best title to date. 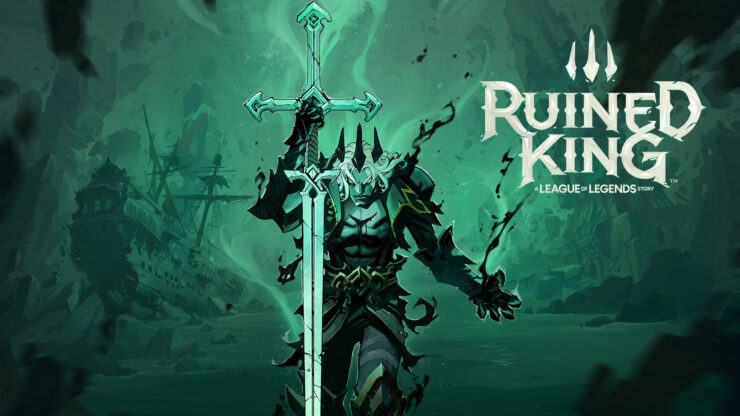 While it doesn't innovate the formula introduced in Battle Chasers: Nightwar too much, Ruined King: A League of Legends Story's quality is undeniably high, so much that even those with little to no knowledge of the League of Legends universe can enjoy the game fully. With an engaging story, charming characters and amazing combat system, the game by Airship Syndicate is the best possible debut for Riot Forge, and one of the best role-playing games released this year.