Battle Chasers is back. That may not mean much to most folks in 2017, but if you were a hardcore comic nut in the late 90s, the impending release of Battle Chasers: Nightwar may stir up a few emotions. Excitement, curiosity, and perhaps a bit of frustration.

Created by artist Joe Madureira, Battle Chasers was groundbreaking stuff back in 1998. The series was heavily influenced by Japanese manga, which was just beginning to be localized in a big way, and did a lot to repopularize fantasy comics. Unfortunately, Battle Chasers’ impact was blunted by the fact that Madureira couldn’t keep to a schedule, producing only two or three issues a year. The 9th, and thus far final, issue of Battle Chasers arrived in 2001 and ended on a cliffhanger that’s never been settled.

A career transition from comics to video game development was the main reason Madureira abandoned Battle Chasers, so it’s a touch ironic the series is now returning in interactive form. But hey, you could argue games are Joe Mad’s true calling. The Darksiders franchise (which he created) is better than any comic he’s ever done. Does Battle Chasers reach new heights as a video game, or is this another chunk of 90s nostalgia best left in the past? Time to chase down some answers. 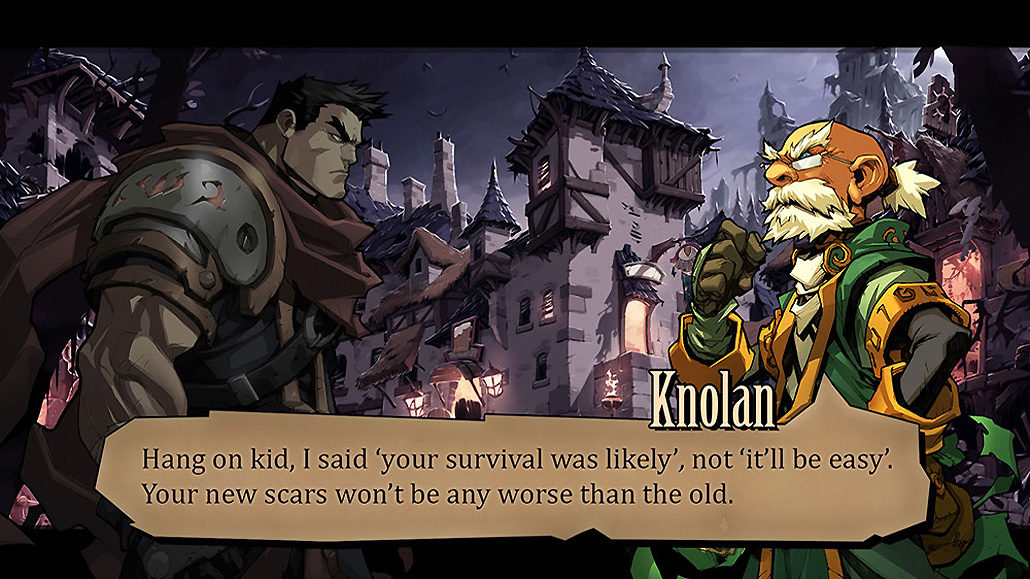 First, a major (and rather disappointing) point of clarification – Battle Chasers: Nightwar does not directly continue the plot from the comics. It features the same characters and basic setup, but introduces a new story and world. According to the Nightwar Kickstarter page, the Battle Chasers comic is also being revived, with issue #10 coming at some unspecified point in the future, but longtime fans shouldn’t expect much closure from the game itself.

For those unfamiliar, Battle Chasers follows the adventures of a young girl named Gully, who inherits a pair of powerful enchanted gauntlets following the disappearance of her father. As Gully searches for dear ol’ dad and tries to keep his gauntlets from falling into the wrong hands, she gathers a band of powerful allies. They include gentle war golem Calibretto, gruff wizard Knolan, brooding swordsman Garrison, and sexy bounty hunter Red Monika. Battle Chasers: Nightwar kicks off with the gang flying to the mysterious Crescent Isle, where they hope to find answers about the decline of mana, source of the world’s magic. Unfortunately, their airship is shot down by bandits, leaving the party scattered.

If Battle Chasers’ cast sounds a bit stock, there’s a reason for that – the original comic series borrowed a lot of inspiration and tropes from JRPG classics like Final Fantasy and Chrono Trigger. The plot of Battle Chasers: Nightwar is also rather utilitarian, serving mainly to propel the player from one mission or dungeon to the next. NPCs delight in giving you the runaround, and seemingly every minor objective is inflated into an elaborate multi-stage mission. I did eventually become moderately absorbed in Nightwar’s story, but it would be a stretch to say the game ever really surprised me.

Thankfully, Battle Chasers: Nightwar elevates a somewhat derivative world with some truly fantastic visuals. Joe Madureira’s unique art style is brought to vivid life via the game’s beautifully-detailed and animated characters, and dungeons have a rich, almost painterly quality. Other nice touches include fun comic book-style 2D cutscenes, a nicely-animated intro, and full voice acting. Nightwar may be a relatively low-budget indie game, but its production is on par with much better-funded RPG projects from studios like Blizzard and Obsidian Entertainment. 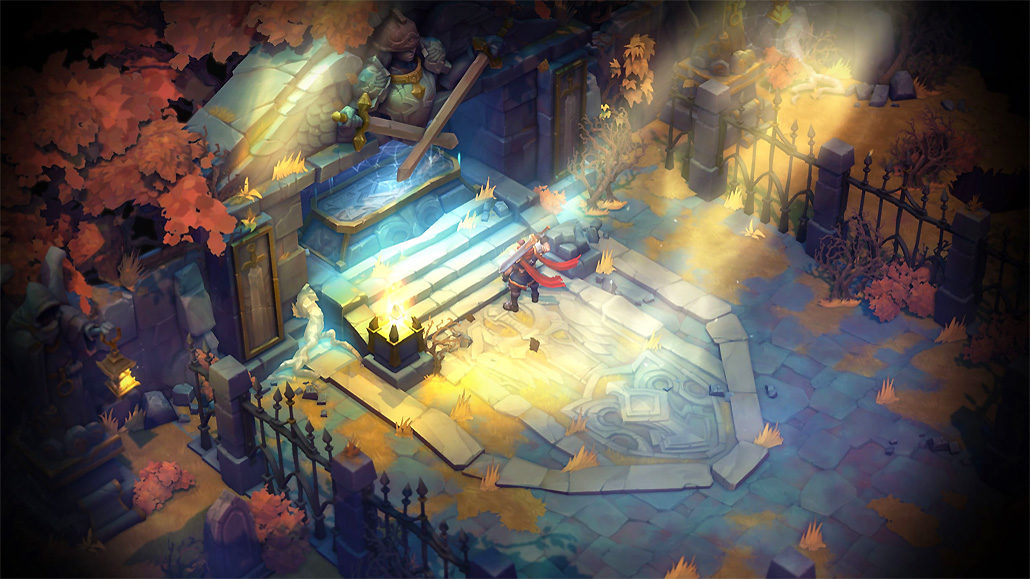 In terms of game design, Battle Chasers: Nightwar is a mix of Japanese and Western RPG sensibilities. In classic JRPG style, Nightwar features a simple overworld, turn-based combat, and linear structure, but its dungeons are ripped directly from Diablo. The isometric perspective, randomized layouts, stat-boosting shrines, and piles of sweet loot are all accounted for. Nightwar won’t win any innovation awards for its approach to its dungeons, but it does a good job of replicating Diablo’s low-key addictive appeal.

Granted, Battle Chasers: Nightwar does mix it up a bit when it comes to combat. Rather than copying Diablo’s simple hack ‘n’ slash system, Nightwar instead goes the Final Fantasy route. Your party and the baddies line up on either side of the screen, and you choose from a variety of standard attacks and more powerful mana-draining abilities. The game dusts off the old Active Time Battle system, in which more useful abilities take longer to pull off, necessitating some pre-planning on the player’s part. You don’t want to leave your party open by charging up too many big moves at once.

So far, so standard, although Nightwar does introduce one new tweak to the old formula. Landing basic attacks will “overcharge” your mana bar, allowing you to use abilities without depleting your main mana pool. As a basic example, when Gully hits her standard “Jab” move, she gains 10 Overcharge, which she can then use to unleash her Scatter Shot ability without touching her core mana. Dungeons are long and you aren’t given a lot of mana to get through them, so managing your Overcharge is essential. Ideally, you should launch almost all your abilities using Overcharge, although knowing when to say, “To heck with it” and dip into your core mana pool is an important part of Nightwar’s strategy.

And that’s about the extent of Nightwar’s battle innovations. There’s also a Burst Meter, which fills as you land attacks and absorb damage, eventually allowing you to let loose a particularly useful ability, but we’ve seen that in plenty of RPGs before. Nightwar’s few remaining touches of individuality largely come from its characters – yes, the Battle Chasers cast is mostly made up of common tropes, but they show a more original side in battle. For instance, the dainty Gully is actually the party’s tank, while the hulking war machine Calibretto is your surprisingly-frail healer. There’s an art to best-using them all, and once you get the ability to choose your party members, you can have some fun finding your favorite combinations. 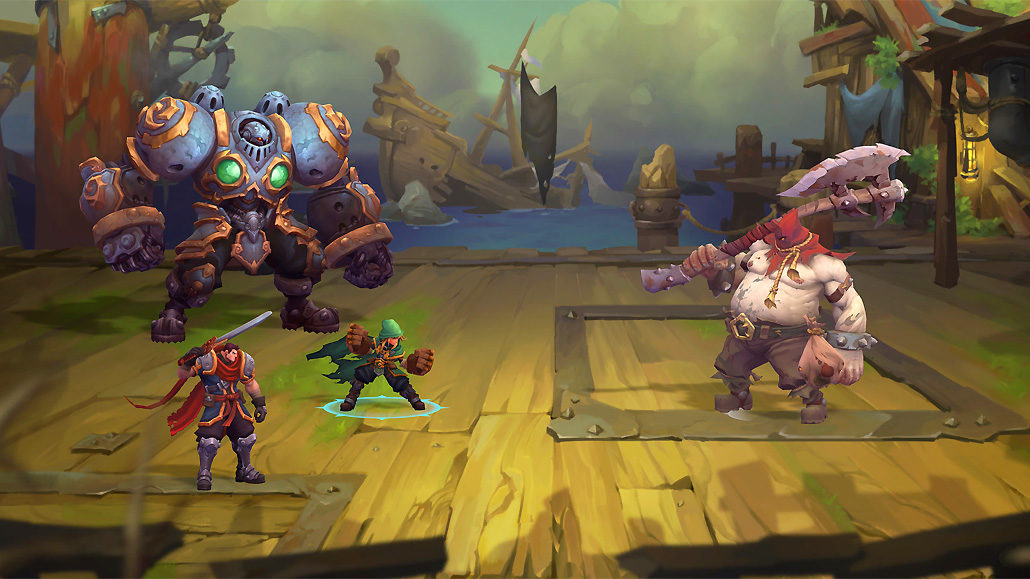 Ultimately, fights in Battle Chasers: Nightwar are quite satisfying, in spite of their familiarity. The system’s only major flaw is that battles can be a bit drawn out. Your attacks don’t do as much damage as they could, meaning even relatively low-level battles take minutes to plow through. This doesn’t mesh well with the game’s Diablo-style level designs – the combination of dense dungeon hacking and lingering turn-based battles can start to feel like a bit of a grind.

Really, grinding is a key word when talking about Battle Chasers: Nightwar. You gain levels slowly, money is hard to come by, and most stuff, even basics like healing potions, need to be crafted. The game expects you to take multiple trips through its dungeons to gain experience and loot, and fighting through the same turn-based battles repeatedly can become a drag. There’s a reason Diablo has always made combat as mindless as possible.

Honestly, Battle Chasers: Nightwar feels like a 15-hour game that’s been artificially pumped up to 25 hours. You’re certainly getting good value for your $30, particularly if you love grinding for loot, but I often wished the game would pick up the pace. Given the series’ history, it feels strange to complain about getting too much Battle Chasers content, but sometimes less is more.

This review was based on a PC copy of Battle Chasers: Nightwar provided by publisher THQ Nordic. You can buy the game via Amazon.

Like the original comic book series, Battle Chasers: Nightwar looks fantastic but feels a bit hollow. The game’s JRPG battle system and Diablo-style dungeons are rock solid but don’t bring many new ideas to the table. If you’re really into Joe Madureira’s art or grinding for loot, you’ll find plenty to like here, but the general RPG audience may find the game slightly lacking in flavor. Not bad at all, just a little flat. Perhaps it’s unsurprising that a video game, based on a comic book, based on earlier video games feels like it’s spreading its inspiration a bit thin.