Hell is a place that no one would be going into willingly, but there's no denying that it has a unique, twisted sort of charm, with its fiery depths and otherworldly landscapes. Many video games offered different takes on this theme, but very few managed to make it as entertaining as the Darksiders series, offering a unique comic-book-inspired design for both the location and its denizens that are instantly recognizable. The series may not be the most original around, drawing its gameplay inspirations from other popular franchises, but it still managed to get its good share of fans.

Darksiders Genesis is the latest entry in the series. While the game is not a numbered entry, it comes with all the features seen in the main entries, and some new ones that make it an enjoyable ride, despite a few issues.

Darksiders Genesis is set in the aftermath of the battle on Eden, where the Horsemen, obeying the will of the Council, destroyed the Nephilim and maintained the balance. For a short while, unfortunately, as Lucifer is plotting something to upset it again, and the Council decided to send the two Horsemen War (the protagonist of the original Darksiders) and Strife to find out more about this plot, which involves other demons, and prevent it from being carried out.

The Darksiders Genesis' story isn't the main focus of the game, but it is serviceable and enjoyable in true Darksiders fashion. The lore is as interesting as always, and War and Strife are likable main characters. Their banter is especially well-written, thanks to their different personalities: War is loyal to the Council, strict and serious, while Strife, while still loyal, doesn't disdain to do his own thing every now and then, questioning the rule of the Council and the role of the Horseman in the keeping of the Balance. Their personalities tend to be a bit mono-dimensional, to be honest, but the interactions between themselves and the other characters are rather good.

Despite being a spin-off, Darksiders Genesis is an entry in the series through and through, featuring some of the best gameplay mechanics seen in previous games with a new twist, which actually works rather well. Unlike its predecessors, Darksiders Genesis is a top-down hack and slash game that's reminiscent, at first glance, of the Diablo series. While the comparison is not entirely wrong,  Darksiders Genesis is more than a mere Diablo clone, as the similarities end at the camera view and the somewhat chaotic combat against countless enemies, which is also a staple of the Darksiders series.

The [Prologue] mission is actually a very good representation of the real Darksiders Genesis gameplay experience. Gone is the big, interconnected world, seen in the other entries in the series, but some of the traversal mechanics are still here, such as the ability to summon horses, climb on ledges and so on. Mission design takes advantage of these mechanics: some of the missions feature a combination of larger fields with smaller dungeons, so the absence of the interconnected world isn't too damaging. These larger fields are also well designed, as they are filled with treasure chests, optional enemy encounters and other secrets that reward exploration. The quest system rewards players for completing a set of tasks that are often specific to a particular mission, so there are a few good reasons to explore outside of simply seeing everything the game has to offer. Dungeons are also well-made, and exploring them is quite fun. Like fields, they abound with secrets to find as well as enemies to defeat, and the occasional puzzle adds more variety. Everything considered, the exploration in Darksiders Genesis made the jump flawlessly from the third person to top-down view: if you played any of the previous entries in the series, you will find yourself right at home here. 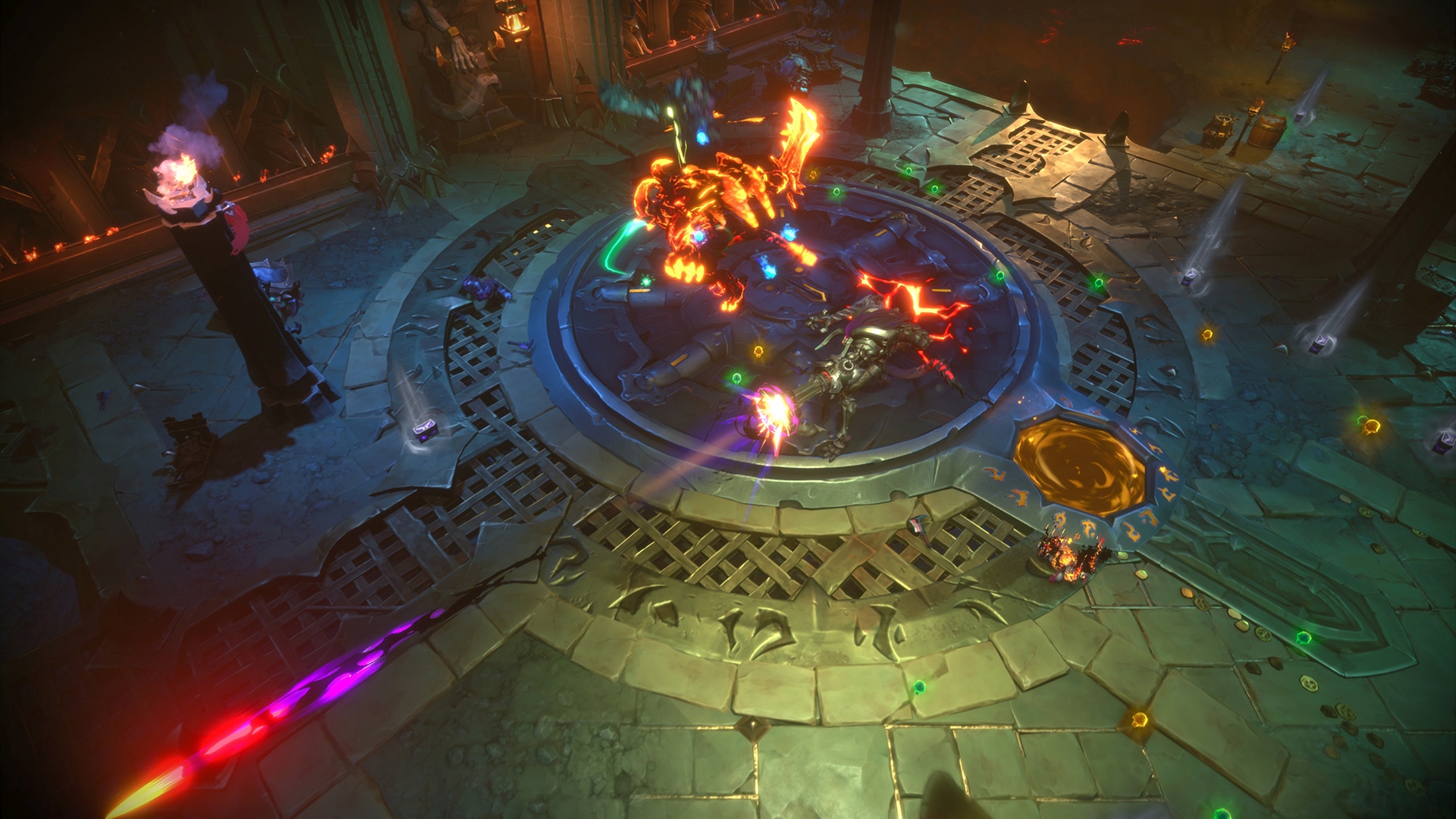 Like exploration, combat transitioned rather well from the third person to top-down view. Some mechanics had to be obviously tweaked, but the basic concepts are still the same. Players can control either War and Strife in combat, and the two feature radically different fighting styles. War is the strong, close-range warrior who can use light and heavy attacks, which can be combined for some slightly different combos. War's health and attack power are higher compared to Strife, and he can hold his own even in the direst situation, also thanks to the ability to block attacks.

Strife, on the other hand, is more effective at long range fighting thanks to his guns, which can use different types of bullets with distinct properties. He is more agile than his brother, having the ability to dodge attacks multiple times in a row. The character has also some sort of rage mode that allows him to shoot faster with the regular bullets and to release a max charged shot without charging with special bullets. Strife also comes with short-range attacks, but they are much weaker than War's, and not an optimal way to dispose of enemies. Both War and Strife can also activate the powerful Chaos forms, which helps them dispose of enemies quickly thanks to a temporary power increase.

Darksiders Genesis' combat feels a lot like the combat seen in previous entries in the series and sadly comes with similar issues. Despite a good amount of options, using all of them is hardly required to dispose of both mobs and bosses: the War basic combo is more than enough to win most encounters, which makes all the other options almost superfluous. Sure, you can mix things up a bit with air combos, but it is not required at all. Wrath attacks are varied enough, to be honest, but they don't do much to make combat less repetitive over time. Things also become chaotic quickly, especially during boss battles, making all the offensive and defensive options even more trivial. It is a shame, as there are mechanics that could have shined more, like War's just parry mechanic, which is difficult to pull off when surrounded by enemies. Things sometimes get annoying during combat due to the camera, as only the character is outlined when the view is obstructed. 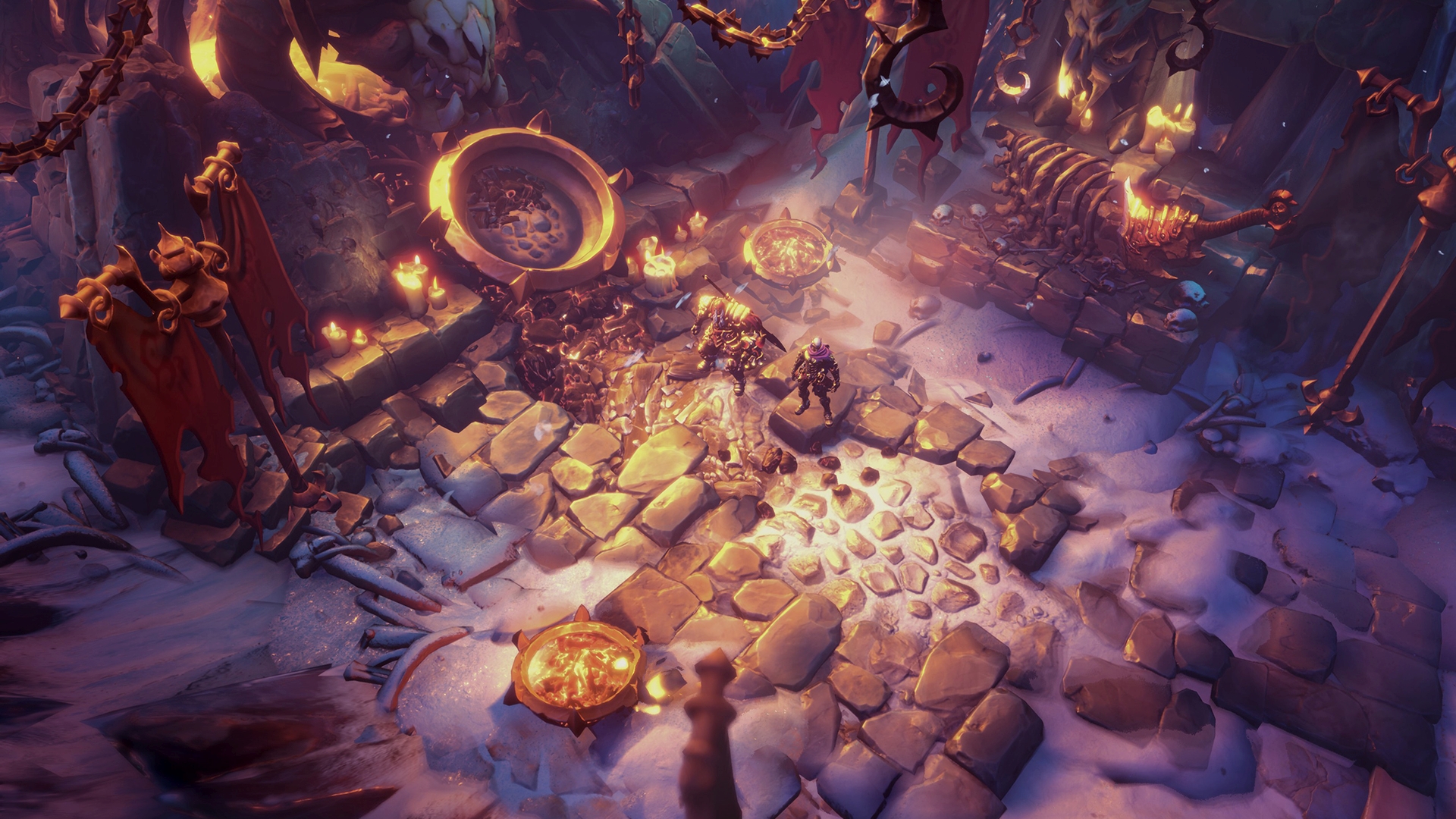 With things getting chaotic during combat, having high enough stats is very important to make it through all of the game's missions. Darksiders Genesis features a very interesting progression system involving Creature Cores. These cores, which can be powered, are dropped by both regular enemies and bosses, and they grant a variety of benefits, ranging from simple stats increase to unique abilities, such as the ability to leave a damaging lava trail behind while dodging, summoning friendly hellhounds and so on. For these benefits to become active, the cores must be placed on a grid, and each node features a different affinity that improves the effect of a core sporting the same affinity. The Creature Core system acts like a loot system in Darksiders Genesis, providing a little more depth to the experience, and one more reason to replay through already completed missions.

Characters can be improved not only with the Creature Core system but also by purchasing the right items from shops. Additionally, new attacks can also be purchased with Souls and Boatman Coins, and basic ones upgraded for improved efficacy. Generally, the upgrade and character progression systems work quite well in the context of the game, creating an engaging gameplay loop.

While Darksiders Genesis can be played solo with no problem, it is clear that the game has been designed as a co-op adventure. The cooperative mode is available both as local and online multiplayer, and they both work well, especially the local split-screen mode, which is something rarely seen in PC games. In co-op, some of the combat issues are alleviated, as the different move sets of the two playable characters complement each other well.

Darksiders Genesis's presentation is also in line with what we have seen in the series before. The comic-book inspired aesthetics shine for the locations, which look beautiful, with colors popping out and plenty of dynamic elements. Character models are extremely small, obviously, so they are not particularly detailed, but they do their job well. The art using during dialogues looks great and helps better define the two horseman and the many supporting characters. The game runs well, keeping a steady 60 FPS at the highest setting on the PC used for the review (i7-3770 CPU, GTX 980 Ti GPU, 16 GB RAM). It is not all that demanding, so I expect it should run well on most modern PCs.

Darksiders Genesis twists the series' formula and manages to accomplish this well, despite some issues such as repetitive combat and the lack of a true loot system. It may not be a game for everyone, but it is undeniable that the experiment has been successful.

Reviewed on PC (code provided by the publisher). You can purchase the game for PC via Green Man Gaming at a 20% discount.

Darksiders Genesis manages to twist the series' formula successfully, offering plenty of engaging puzzle-solving and treasure hunting, both elevated by the good mission and location design. Repetitive combat, lack of a true loot system and a few other issues prevent the game from being a must-buy for everyone, but Darksiders fans will surely enjoy their time with the game, even more if they have a friend to play with.