Rock of Ages 3: Make and Break

It's hard to remember a time when Rock of Ages didn’t exist. It has appeared in one form or another at the periphery of the console arcades and steam libraries for generations, much like the equally revenant and time-traveling Doctor Who. Neither groundbreaking nor terrible, the franchise has continued forward despite its bizarre name and inscrutable premise for nearly a decade. Like Doctor Who its existence must prove the existence of a community of fans for Rock of Ages, although I have yet to see any evidence of them. Rock of Ages 3: Make and Break, the latest face for this rock to wear, feels like a paradox. It is both funny and infuriating, exciting and tedious, thoughtful and pointless.

The single player section of the game is overflowing with a variety of things to do, but at the end of the day, they all involve navigating a rock down a series of ramps. As the name kind of suggests, you play as a time-traveling rock who is forced in Sisyphean tradition to nearly complete the same task over and over again. Descending down the ramps feels suitably fast for the po-faced boulder (or the bundle of sheep, or whichever other rock you’re fortunate to unlock on your travels), and the controls really give you the impression you are a great big rock as you smash through obstacles and buildings alike. Unfortunately, it’s not always interesting to be a great big rock, and a lot of the time it’ll feel like you have no control at all. Seemingly simple jumps become impossible challenges while gentle corners transform at random into herculean feats of strength as your rock attempts to launch itself from over the rim. Moments of joyful amusement can be crushed under the weight of the game’s difficult controls.

Even after many hours of play, you’ll still feel like you can’t predict when and where the game will be impossible to play. This, coupled with an annoying erratic AI can mean that defeats are often snatched from the jaws of the victory as your opponent races over everything they struggled with a moment ago, while the opposite happens to you. The heart of the game is a competitive tower defense game that asks you to simultaneously create a network of challenges to stop your opponent, while overcoming your own as a big old rock. But you will also find time trails, races, and dozens of other minigames as you unlock more levels and locations on your strange voyage, but each level often revolves around beating the same course more than once already, so failure means becoming intimately aware or, but no less proficient, in them as you start again.

Multiplayer is often more entertaining than annoying and feels like the sort of party game Dionysus would demand to play, rather than a serious racer or tower defense game. But even still matches and courses can last a little bit too much and fatigue can set in. There are hundreds of options for creating your own games in Rock of Ages 3 and if a community for it exists, I assume they’ll be happily satisfied with what can and will be created. Like Mario Maker, there is a lot of room for the community to create unique, interesting, and impossible levels for you to throw rocks at.

Rock of Ages 3 looks so incredibly unique though, and that alone is probably the reason you’ve heard of the series, even if you haven’t played it. That, or you’re thinking of that terrible film with Tom Cruise, Russell Brand and Catherine Zeta-Jones but thankfully, Rock of Ages the game looks nothing like that, and has nothing to do them. The Steam page openly acknowledges the team's Monty Python inspiration, which itself was drawn from parodies of the medieval and other historical art styles. Rather creepy looking 2D characters prance around the stages and in the cinematic cutscenes, while hand-drawn obstacles and ornaments pose as the main threat for the rock. It’s both interesting and unpleasant to look at. Each new location has its own art style and aesthetic which bewilderingly looks different but also still looks like Monty Python somehow.

The sound design is equally difficult to come to grips with. It's silly and strange and entirely in keeping with everything else in the game, and leaves you to decide if it is a good or bad thing. Weirdly, it's rather difficult to change the volume controls anywhere but the main menu. There were other issues in playing the game, with prompts and commands being ignored in the menu areas, though it didn’t appear to happen in the actual game itself.

As a tactical game, Rock of Ages 3 is lacking. Despite the dozens of rocks and defenses you can acquire through the single player campaign, the actual levels always seem to come down to luck. Clearly the serious was built with more of a comical tone than a serious one, and you probably aren’t meant to think too much as you barrel your rock over some sticky cows only to be molested by a big cat on a balloon. But it can swerve so far from strategy that it begins to feel unbalanced. AI opponents build labyrinths of defenses where you might only be able to accomplish a handful. There are a lot of interesting ideas and funny moments to be found in Rock of Ages 3, but these too can feel sour and disappointing depending on the mood you’re in when you boot the game up. Alcohol helps. 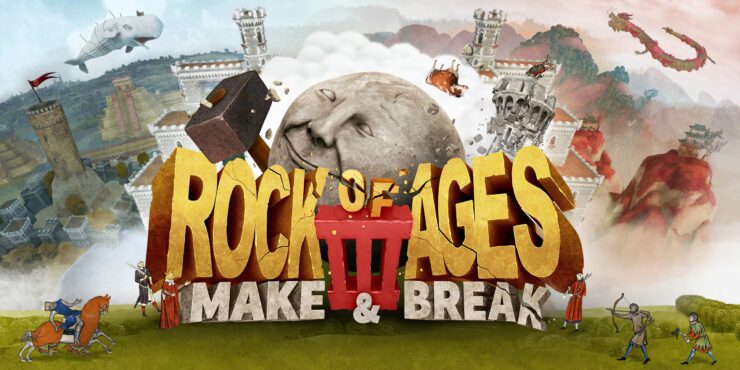 Rock of Ages 3 could be incredibly popular with the right audience with its impressive inclusion of map-making on top of its wacky, over the top design. But there are so many caveats to what you need to enjoy the game, it's hard to see it reaching widespread appeal.