Industry tends to be the most neglected aspect of many city-builders, with games like SimCity and Cities: Skylines treating it as a necessary evil at best. Sure, your citizens need somewhere to work, but once you set up a few factories on the outskirts of town, you can pretty much forget about blue collar matters. At first glance, Rise of Industry appears to be your typical civic-minded sim, but it sets itself apart by focusing squarely on the hardy world of farming, manufacturing, and resource management.

Economic sims of various stripes have been around for a long time, of course, but the genre remains relatively niche. Rise of Industry seems to be trying to cast a wider net, but does it manage to make playing a manufacturing kingpin actually interesting? Or should a factory recall be issued? Time to find out…

Rise of Industry screenshots, like the one above, can be a bit deceptive. Yes, the game has SimCity-like towns, but you have very little direct control over them. When you begin a new campaign, you’re presented with a randomly generated map divided into several regions, each with a town at its center. Picking a region to place your headquarters in is the first decision you’re tasked with. Generally speaking, it’s best to just set up shop near the biggest city, as it will have the most stores you can sell your goods at. Each store will have specific products it’s looking for, and if you provide them, the city will prosper, grow in population, and eventually level up, which adds even more stores you can sell to. You can also purchase permits to additional regions, allowing you to spread your empire across the map.

Once your headquarters is in place, you get to work building basic “gatherers” (mines, water siphons, lumberyards), then, in most cases, move onto farms and ever-more-advanced forms of manufacturing. Your various operations are symbiotic – if you want to, say, make a pizza, you’ll need to start with wheat and vegetable farms, which each require water from your siphon, and a cattle farm, which needs both water and grain from your wheat farm. You then have to build factories to make dough (water and wheat), cheese (milk and water), and another to combine the dough, cheese, and veggies. So, producing a simple slice requires you to build at least seven different operations, all of which are trading resources back and forth willy-nilly. While my empire was mostly built on junk food, I can assure you producing clothes, furniture, and home appliances requires just as many steps.

A fleet of trucks constantly scurry around the map, carrying resources from one place to another. You can let the game automate most of this if you’d like, but it doesn’t always make efficient decisions. Thankfully, the game lets you manually set the destinations of everything you produce. As the game progresses, you’ll set up truck, boat, train, and yes, even zeppelin, trade routes and logistics networks. This may sound like a lot to manage, and indeed, you’ll likely spend a lot of time confused the first time you play Rise of Industry, but not because the game is actually that complex.

Rise of Industry doesn’t do a great job of explaining its mechanics. The game has a tutorial, but it only covers the broad basics. A variety of pop-ups appear as you’re playing, but their usefulness is inconsistent and there isn’t a convenient way to reread them. You can also access the Rise of Industry wiki while playing, which would be helpful if it weren’t so limited and out of date. You pretty much have to accept that your first game or two won’t end well, as it’s quite easy to stumble into an unwinnable situation. My first game I built too fast and messed up my distribution, resulting in a quick bankruptcy. My second game, I neglected to buy permits for additional regions, thinking I could wait until later, only to discover my AI opponents had snapped them all up. Thankfully, after a visit to the very helpful Rise of Industry Discord server, my third run was a lot more successful.

And therein lies the rub – once you figure out how Rise of Industry works, you realize the game is pretty simple. Make stuff, sell it, use the money to research new tech, then combine your stuff to make better stuff. Rinse and repeat. Make no mistake, Rise of Industry’s simple, yet satisfying gameplay loop and bright, lively visuals often make for a pleasant experience, but more could have been done with this concept.

I wasn’t expecting Rise of Industry to be a trenchant takedown of capitalism, but the fact that the game doesn’t even mention the workers toiling in these factories feels like an oversight in 2019. The environmental impact of industry is also glossed over as you can just throw down an air purifier or two to zap any pollution your factories create. Other things you might expect, like corporate espionage, marketing, and the ability to develop your own products are also missing. Your ability to personalize your empire is very limited. Ultimately, Rise of Industry feels like a game I’d be happy to tap at on my phone, but I’m not sure it’s going to satisfy hardcore PC sim fans.

Then there’s the jank. The game froze/crashed on me multiple times, and many parts of the game feel unfinished or simply don’t work. Distribution of resources can be frustratingly unreliable, with water sometimes not being delivered to farms or valuable goods being lost in transport. There are also random events that are supposed to keep you on your toes, but often they seemed to have no actual effect on my game. I’m willing to give Rise of Industry some leeway, as the game was developed by a very small team, but still, some of these issues can be irritating.

Once you know what you’re doing, you can “beat” Rise of Industry (by producing a special prototype car, computer, or premade dinner) in around 7 to 10 hours. Whether you come back for more will depend on how much of a true industrialist you are. Most playthroughs follow a fairly similar path, but if improving efficiency and building up your bank account make you happy, the game should continue to get a rise out of you.

This review was based on a PC copy of Rise of Industry provided by publisher Kasedo Games. You can purchase the game with a 15% discount on Green Man Gaming. 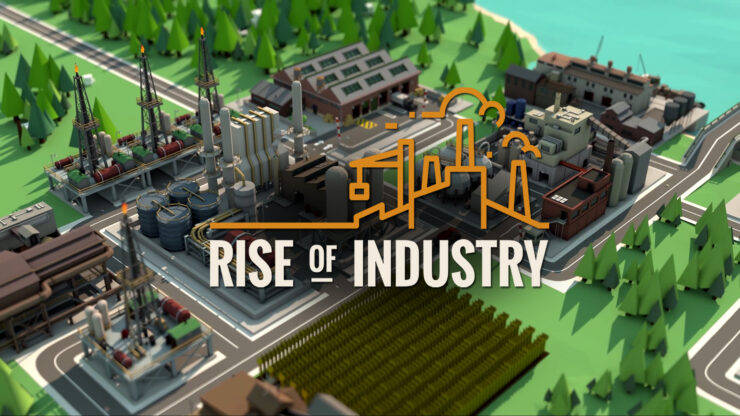 Rise of Industry is fundamentally sound, but it goes from boom to bust too quickly. Poor tutorials make the game hard to get into, and once you do get the hang of things, you’ll find the magic is short-lived due to a lack of depth and polish. There is fun to be had with Rise of Industry, but budding tycoons concerned about value may want to invest elsewhere.