A land ruled by vampires doesn't sound like a land any regular human would want to live in: getting worked to the bone to satisfy these immortal masters only to get discarded later on is hardly the recipe of a happy and prosperous life. However, things are not always so grim, judging from Immortal Realms: Vampire Wars, a strategy game that does a lot of things right and tries to spice up the traditional strategy game experience with some unique mechanics that work surprisingly well.

Immortal Realms: Vampire Wars features different story campaigns centered on different Vampire tribes - the Dracul, who rule over the lands of Warmont since time immemorial, the corrupt and vicious Nosfernus who hails from the Land of the Dead and the mysterious Moroia, from the frozen lands in the North. All three tribes have their own woes and trials to deal with, which they will during their specific campaigns.

The story of the main campaigns isn't particularly remarkable, as it features treachery, bloodsucking, otherworldly powers, and all the vampire tropes one can think about. It's definitely serviceable, however, and some of the lords can be charming in their own twisted way. At the end of the day, the main story serves mostly as the backdrop for all the strategic decisions players will make during the game. And there will be quite a lot of them.

On the surface, Immortal Realms: Vampire Wars plays like a traditional turn-based strategy game featuring different maps divided into different territories, a variety of facilities like keeps, villages, and other grim locations like caves and mysterious ritual grounds. Every action taken on the map requires one Action Point, which are fully replenished once the turn is ended. By accessing the facilities' functions, you can expand your army with new units, and gather resources. All standard fare for a turn-based strategy game.

Playing the tutorial mission for a few minutes, however, will prove how Immortal Realms: Vampire Wars does things very differently from most turn-based strategy games. For starters, most mechanics have been streamlined considerably, such as resources, which are limited to blood in the game, making the game quite accessible even to those who never played a strategy game before. But what truly sets Immortal Realms: Vampire Wars apart from other similar games are the card mechanics and the battles between opposing armies.

At the start of each mission, the player is given a selection of cards that can be used at any time to unleash a variety of different effects, ranging from reduced blood cost to recruit units, to instant recruitment of such units, to blood and AP bonuses and so on. These cards spice up the experience a lot more than anticipated, providing another layer of depth to a game that already comes with plenty of it.

The other mechanic that spices up the Immortal Realms: Vampire Wars experience a lot are tactical battles. When two opposing armies clash, players are transported into a battlefield where they must move their units around, fight enemies and win the battle. While this combat system feels rather basic at first glance, it quickly shows its depth with mechanics like flanking, which provides a damage bonus to the attacker if units are positioned correctly around an enemy, and special tiles that grant healing, increased defenses and other bonuses. Unless the balance of power tips heavily on either side, the tactical battles can be very challenging, also thanks to the more than competent AI, requiring players to use the power of their Lords, named Vampires with special abilities, properly, powers that are represented with cards. Every Lord comes with their own set of powers that can be enhanced once enough experience has been obtained, so putting together an army with units that gel well with these powers is extremely important to winning battles against powerful armies. In case the player's army is much more powerful, or the armies' power is evenly matched, it is possible to skip the tactical combat altogether, resulting in excellent pacing that doesn't slow down needlessly.

Both the strategic and the tactical elements of the game are greatly enhanced by the differences between the three vampire clans, which come with very different units and tech trees. Some of the mechanics regarding units are particularly interesting, like the Keywords mechanics, which grant units unique bonuses upon recruitment. The RNG involved can make it difficult to get the keyword one is looking for, but they are not so important that the usefulness of any given unit strictly depends on them. More depth is also given by the equipment system, which allows Lords to equip different items that can be obtained after battles or by forging them at a blacksmith in exchange for blood to obtain a variety of bonuses. All these mechanics grant players a level of customization that is usually not found in strategy games.

With so many mechanics and customization options, the Immortal Realms: Vampire Wars' main story mode will keep players engaged for quite some time. Unfortunately, the experience doesn't change a whole lot during the course of the game, and once an effective strategy has been found, it can carry the player far. Map design is mostly good, but it doesn't break any new ground. After ten hours or so, repetition will inevitably start kicking in.

Immortal Realms: Vampire Wars offers multiple play modes outside of the main story campaigns. Sandbox mode allows players to create their own custom campaign, choose which factions will take part in it, and decide the victory conditions among a few different ones. Skirmish Mode, on the other hand, allows players to take part in customizable tactical battles, pretty much functioning as a sort of training mode where it is possible to experiment freely with any army composition. These modes are not ones players will spend a lot of time in, so they do not address the repetition issues, but they are a welcome addition nonetheless.

Being a strategy game, Immortal Realms: Vampire Wars doesn't really impress with its visuals. Map and unit design are acceptable, but the story cutscenes feel like they belong in a previous-gen game, with very simple character models and clunky animations. The simple visuals translate to a very undemanding game that can run on pretty much any machine from the past 6 or so years without having to resort to the lowest of settings. The somewhat outdated feel is made stronger by the voice acting, which isn't terrible, but it does sound corny at times.

Immortal Realms: Vampire Wars is a rather enjoyable strategy game that streamlines many of the complicated mechanics of the genre while trying to offer something different. While the experience can get a little repetitive over time, developer Palindrome Interactive fully succeded in creating a game that succeeds at offering something different and that is both welcoming for newcomers and extremely engaging for veterans. 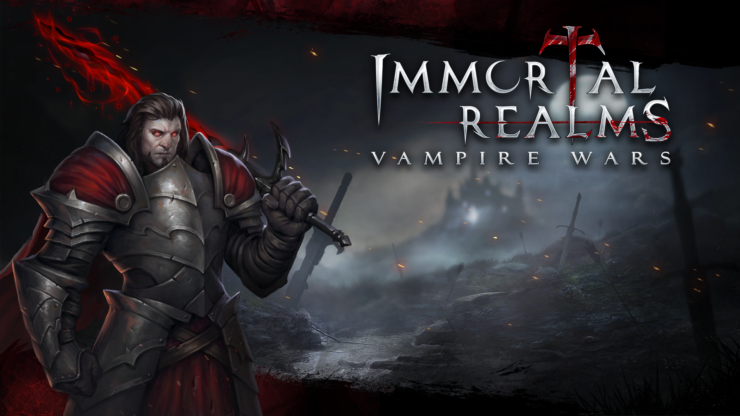 Streamlining many of the typical strategy game mechanics while adding more depth with the cards system and tactical battles, Immortal Realms: Vampire Wars is a game worth playing for all strategy games and role-playing games fans. While the experience tends to become a little repetitive over time, the different factions and the many customization options provide all the tools for players to make the experience feel fresh even after tens of hours.