I'm starting to feel like I'm in a bit of an alternate reality version of our history at the moment. Is this 2014, but rather than a load of games getting a remaster or touchup for the PS4 and Xbox One, as they did in our universe, it's the PC that is getting the remasters. From the fantastic Catherine to the publically hated Warcraft III: Reforged and the excellent Saints Row: The Third to the dreadful Mafia II. The previous year and a half have seen a litany of old games getting at least some new treatment. Command & Conquer Remastered may very well be the best of them all.

Taking from The Secret of Monkey Island remake, Command & Conquer Remastered has been made in a way that also shows how much has been done to improve what are two games, one that is twenty-five years old and another that's twenty-four years old. Not only do you get visual improvements, but you also have UI, usability, networking and so much more. Command and Conquer Remastered Collection is something special and it's cheap to boot.

Want to know something that took me a little by surprise? I don't remember Command & Conquer being this difficult. So when playing I've gone and completed the NOD campaign in Tiberian Dawn and then spent my time across GDI and both factions in Red Alert. I can't help but find that I'm struggling with this a lot more than I did in the original releases. Maybe my memory is failing me and I always struggled. Maybe I'm just getting rubbish at games as my body slowly decays, falling victim to the passage of time. I'm honestly not sure.

What I am sure of is that the brand new ability to select a difficulty level is a saving grace. I'm somewhat disappointed in myself that I had to go on casual mode for a few missions (one of which will be in the video attached to this review). Still, if it's providing a challenge, it seems the remaster comes with an improved AI, one that will be more than happy to offer a challenge. This is especially true in missions that have you in a very restricted position and with only the most ideal of actions being suitable.

I suppose they're my first complaints - the learning curve and maybe being too true to the originals as the difficulty as you hit the second-third of missions is sky-high. I've found myself telling the game to f-off a few times. I've just got a base with the limited units gave to me and then a huge army is crawling on my doorstep, making the mission seem impossible. Casual difficulty, here I come. Red Alert doesn't seem to have suffered from this to the same level, the learning curve a little smoother, everything just that bit more approachable and easier to use.

This doesn't mean things aren't a little dated at points. This is still a game older than practically all professional eSports players and the vast majority of influencers. It's a dinosaur and it shows. From niggly elements in Tiberian Dawn like the inability to build anything more than one space from a currently placed building to unit pathfinding across the two titles, leaving something to be desired. Sure, one of your units has blocked a ford as it's crossing, but that doesn't mean the rest of the army should turn around and head for the insanely defended bridge.

So there are a few issues from the old still left in, but what about the things that have changed? There's a hell of a lot of that, let's make it clear. As you'll be able to see from the above two screenshots, part of what's changed but also still the same is the way the game looks. Following on from titles like The Secret of Monkey Island remake, the Command & Conquer Remastered Collection also allows you to compare new and old and the difference is sizable, with the game looking more than suitable for a modern strategy game.

This attention to detail can't go unnoticed. From the ground, water and impassable terrain to the buildings, units and battle effects, the game genuinely looks great. Every unit and building has been painstakingly recreated but remaining true to the original. Animations have been reworked, the damage to the battlefield such as the destruction of bridges in Red Alert, everything looks fresh in a way that far surpasses a simple fresh coat of paint that most would settle for.

What also helped in bringing the game forward is the inclusion of build-queuing, something so simple and taken for granted now, but missing way bach in the pre-historic ages of DOS C&C. In keeping with this, the UI has also been improved, segmenting the units and structures you can build, vastly improving navigation and just the general ease of playing the games. Unit grouping, the actual controls themselves - allowing you to pick between classic and modern controls, or just keybind how you like, also makes the game as easy to play as any modern strategy title.

Not only does the game look great, but it also sounds great. Command & Conquer Remastered Collection comes with all of the music touched up, sounding crisper and cleaner than ever before but, even better, brand new tracks by Frank Klepacki and the Tiberian Sons. Add onto this one of the extra features, the jukebox, that lets you play any of the tracks you want to play, whenever you want, and you've got an audible delight. Especially when you're listening to Hell March, which is arguably the most iconic track from any strategy title ever made and sounding fantastic here.

More than the Jukebox, the Command & Conquer Remastered Collection also brings with it every single mission from the first two titles, including those that have never been found on PC before. From the core campaigns, the console exclusive missions, the Covert Ops expansion missions and every little secret mission in between, this collection has everything you could want for your single-player C&C delights. Of course, that isn't all, there is multiplayer.

Normally, I hate multiplayer. It's full of those fleshy humans, all up and interfering with my fun. I've been playing this before launch, of course, and the multiplayer has been very limited as of now but I can't say I've encountered any issues while playing. It's run smoothly, though that should be expected as even now it isn't exactly a resource hog. I've not seen the game use higher than 350mb of RAM and the CPU usage isn't worth thinking about. If there's one little shame, it's that the game doesn't fully use ultrawide monitors. The sidebar appears on the far right, with the far left being a simple black bar. It's a slight advantage to me at least, I don't have the sidebar cutting into my view of the battlefield.

That reminds me, the videos. They run at a regular resolution too, but that's not why I'm mentioning them. The live-action videos have been improved by AI upscaling and don't actually look too bad, all things considered. The other little clips that Westwood Studios had created do look terrible, I have to admit, but I wouldn't have them any other way. All throughout Petroglyph, a studio created by original Westwood developers, have done a fantastic job. You can also see all of these and a lot of behind-the-scenes aspects in the bonus gallery. Side-note complete.

Yes, I have played the vast majority of the game using a regular resolution, as you can tell from the other screenshots - the reason for that is because I've been asked to capture screenshots and video in a normal resolution, but for an example of what it looks like in ultrawide - here's a screenshot.

Earlier on I mentioned Warcraft III: Reforged, there was a reason for that - not just to bait people in. I genuinely think I scored the game half a point to a point too high and this is the game that changed my mind. The work that has gone into this is incredible and, most importantly, EA has communicated with modders, fans and more just to see what people want from this game. Even better, they listened and the result is telling. What is also very telling is the fact that this is a game that costs just £17.99/$19.99, making it an amazing value for money.

So, do you think I recommend Command & Conquer Remastered Collection? If you're thinking "no, he doesn't" then I recommend you re-read everything I've just wrote. Yes, this is a nostalgia trip, but it's also a genuinely great remake of two of the most iconic and influential strategy games ever made.

I'm droning now, let's summarise before the summary. Command & Conquer Remastered Collection is one of the best remasters ever made. It's cheap, fun, engaging and a game that proves that listening to the fans when making something can result in a fantastic result. For Kane.

Copy provided by the publisher for review purposes. You can get a digital copy at a 10% discount via Green Man Gaming. 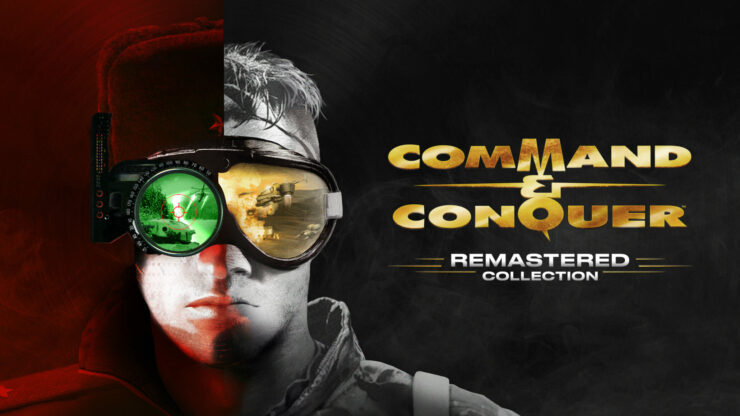 Command & Conquer Remastered Collection is, simply put, an amazing value for money at only $19.99. Containing two legendary strategy games that have been masterfully touched up, looking great and also including the ability to see the old view for comparison, the games have also been touched up with new modern features as and when required, without sacrificing what made the games the iconic titles that they are. There are ever so slight issues with pathfinding at times and the difficulty can ramp up at an insane level, with the AI almost seeming like it's cheating, but overall this is the best remaster I've ever had the pleasure of playing and one that I can't help but recommend to anybody and everybody, even those brand new to the series.