One thing we still don’t have enough of in the modern gaming landscape is unique co-op experiences. Luckily that does seem to be changing, with the Switch’s Snipperclips and next year’s A Way Out, but still when booting up games for the first time, co-op is rarely an option, especially not local co-op. But that’s exactly why I can’t help but adore games like Resident Evil Revelations 2, a game willing to step out of its mold and introduce a unique co-op mechanic. It doesn’t always work amazingly, but when it does it’s genius.

Following on from the Terragrigia nonsense of Resident Evil Revelations, the sequel takes place on a mysterious island where Claire Redfield and Moira Burton have been kidnapped and held hostage. Naturally, the island is dripping with nasty bio-weapons, and an evil overseer watching all you do. It’s the spooky situation you expect for a horror game, and limited ammo supplies only make things tenser.

It’s a game of two halves though, and the other half follows Barry Burton as he discovers the island in search of his daughter. Almost immediately after making landfall, he meets Natalia, a nice girl dressed far too nicely to be any sort of normal human while living in this bio-weapon hell. Barry’s half of the events is a bit more action packed, with fully automatic weapons being fired and big beasts to topple.

In both halves, the main player will take over either Claire or Barry, the weapon-wielding gunslingers, and will take care of the Moira and Natalia, who have their own unique abilities. They each will be able to open special chests, for instance, and Natalia changes things up by detecting or sensing when enemies are in an area, with one player pointing out weak spots while the other player shoots them down. It’s a really good, enjoyable mechanic, one that almost highlights how useless Moira is in comparison. Moira isn’t bad, she has a crowbar to whack things, but she has no special abilities and refuses to wield a gun, even while trapped on an island inhabited by beasts. Not a good time for morals, and as a result, she feels stunted and immature, not helped by her “imaginative” swearing.

Resident Evil Revelations 2 is split into four main episodes, each with a Claire and Barry side to the events, and a few bonus episodes which add a bit more backstory to the events. Sadly, it all feels a bit poorly paced. Barry sets foot on the island months after Claire and Moira first do, so uncovering his story at the same pace as Claire’s is a bit odd and confusing - almost entirely needless. At many points in the game, I couldn’t help but feel that the entirety of the story could’ve been condensed into a single character’s campaign, with alternating partners perhaps, instead of this drawn-out design.

Another aspect that makes the two stories feel odd is the fact that they were originally released as four DLC episodes, and often have you trekking over the same terrain, just with different characters. This can become interesting in episodes where Natalia must spot invisible enemies, which makes simple corridors you’ve been through before far more menacing, but often it just feels like backtracking across the same places for the sake of it.

But thankfully, Resident Evil Revelations 2 manages to stay intense and interesting throughout, despite not being that long. The campaign is filled with puzzles, enemies and bosses that attempt to harken back to the older days of Resident Evil, but instead just feel like modern Resi doing a homage. Not a bad thing, but certainly a world away from the days of the Police Station and the Spencer Mansion.

One aspect that’ll hopefully keep you tuned in for hours is Raid Mode, a multiplayer survival mode where you jog through slightly remixed areas from the main campaign, shooting enemies for high scores and completing simple tasks. It’s a fun diversion and something to sink your teeth into if you need more monster shooting action once the campaign is done - there’s plenty of upgrades, costumes and more to unlock too, so it’s worthwhile.

If I had to pick some sort of complaint with the Switch port of Resident Evil Revelations 2, it’s that the lower resolution and lower framerate than its console siblings aren’t flattering, but certainly not a deal breaker. My biggest complaint would be regarding an absurdly aggressive film grain filter, which is fine most of the time, but in particularly dark scenes it’s a vulgar haze across the screen, making the game look honestly worse than it actually does.

Review code provided by the publisher. You may purchase the Resident Evil Revelations Collection via Amazon. 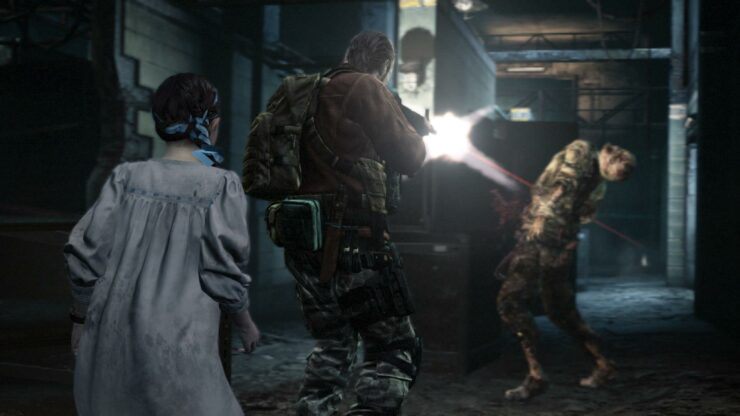 All in all, Resident Evil Revelations 2 is an affordable and fun experience for Nintendo Switch owners. Not quite up to the standard of a full Resident Evil experience, but not far off either - great to play with gyro controls, too.

Resident Evil TV Series Canceled by Netflix After One Season