No one ever said the fight between the living dead and flowers would be a fair one, but in Plants vs Zombies: Garden Warfare 2 is doing its best to even the battlefield. Although originally the series was an amusing distraction found on the phone of millions, the franchise has evolved into a sizable, attention grabbing and unique shooter.

If the core premise somehow alludes you, two teams, one composed of decaying flesh in ridiculous outfits, the other made of brightly colored shrubs, battle it out over cartoonish arenas for some reason. There are single player challenges you can soak your time in, but the appeal of the game is in the multiplayer. Like Splatoon, this is a shooter for the younger generation. You won’t have to worry about blood spraying across the walls or the cost of virtual human life on the conscience as the violence within the game is completely non-threatening. 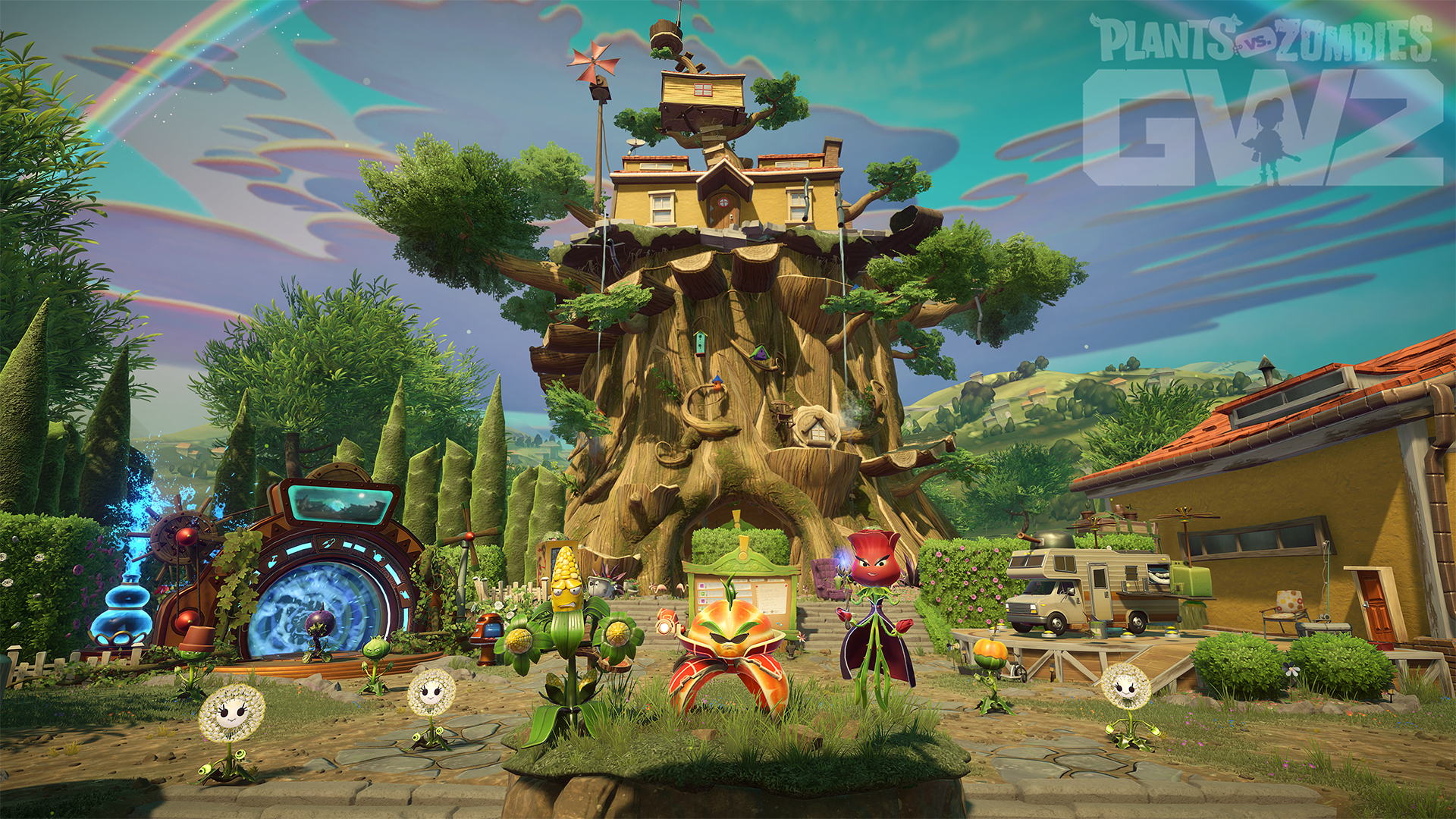 Sunflowers shoot petals while oranges spray opponents with some kind of juicy laser beam. Zombies are equipped with thematically appropriate weapons for their costume. The sports zombies have ball launchers, pirates have a parrot and construction workers have power drills. Each variant for both teams has a selection of special abilities to use, and while each class is designed to be able to fight close, mid and long range, some have a distinct advantage of the other.

Luckily, the developers working behind the zombie infested scenes seem to be doing a lot to help make Plants vs Zombies: Garden Warfare 2 a sustainable game. Patches are being released constantly to help redress the balance and fill in exploits that appear through use. For instance, the Rose was an unstoppable force that would completely dominate the zombies in most confrontations until very recently when a patch reduced her overwhelming magic. Naturally now the plant teams are struggling to win many matches given that a lot of players go-to-strategy has been nerfed, which might mean the zombies will have to get toned down in turn, or a new character will rise to prominence within the plant ranks.

On top of just keeping the game fair, it should be noted that Plants vs Zombies Garden Warfare 2 is an exceptionally complete game at launch. With plenty of maps, dozens of classes and no Day One DLC, this is clearly a game designed to keep you, or your children occupied without the need to sinking addition funds in. If nothing else, this is a worthy ideal that feels like it’s not pressuring you into paying in more and more each week.

That being said, there is a rather confusing in-game currency that is responsible for unlocking your characters and dressing them up. Coins are earned in the thousands each match and can be spent to buy sticker packs, which offer a range of things from the cosmetic to the advantageous. Rather than directly purchasing new playable classes with said currency, like in Rainbow Six: Siege, you are forced to engage in a rather lucky dip instead. Unlocking a class means collecting the correct set of stickers, and although some sticker packs offer a complete set or some class stickers, you will have no say in what, if anything they unlock. 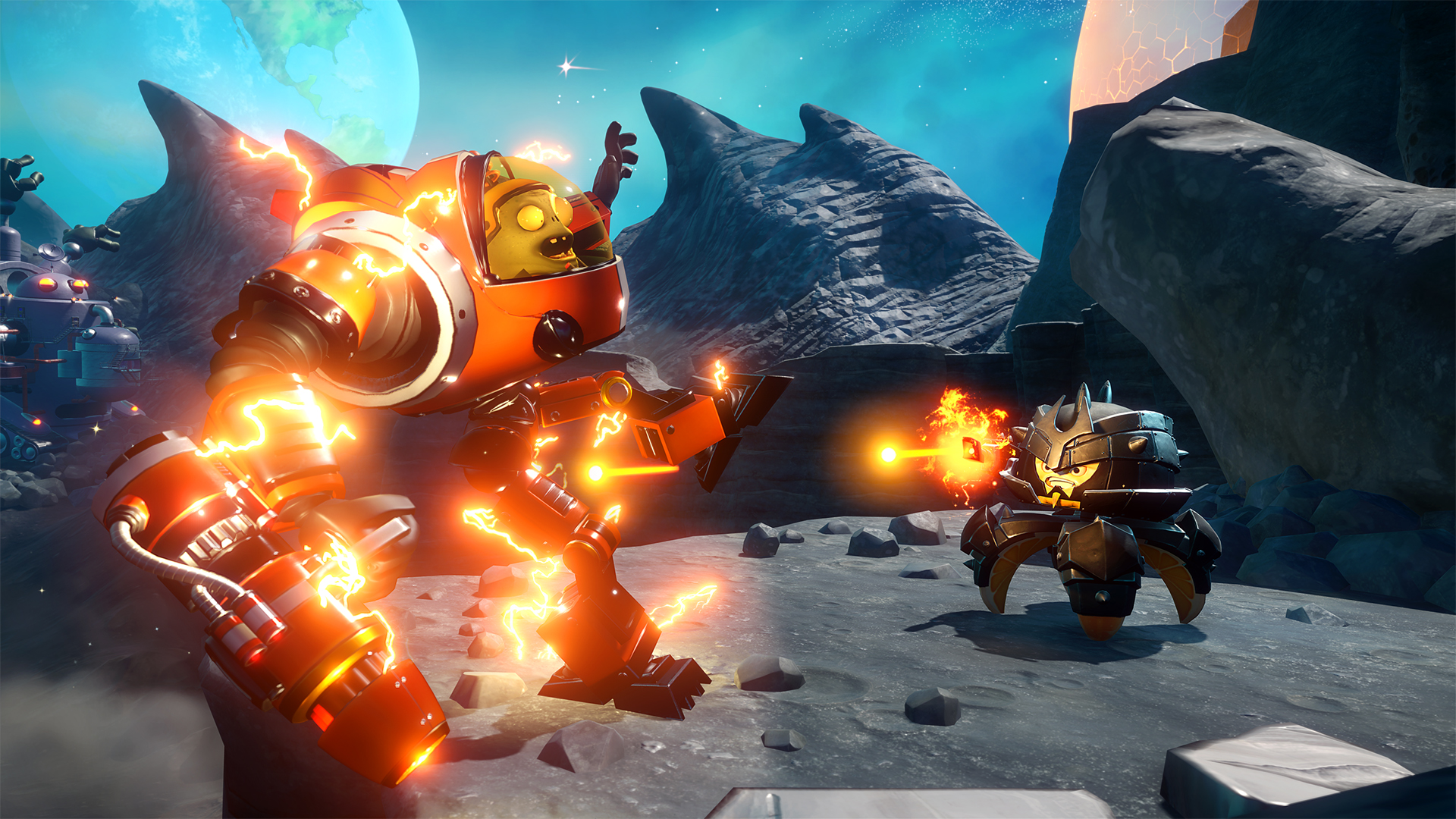 On the one hand, this is good in that it requires you to play with what you have, experimenting and evolving as you go, not to mention that it hinders the likelihood of classes becoming completely saturated in each game. The downside is however obvious, with the potential to spend your hard earned coins on a class you may never play as or that doesn’t compliment your play style. For instance, although I normally prefer fully automatic weapons in your typical online shooter, Plants vs Zombies: Garden Warfare 2 has me playing with slower firing classes, preferably with area of effect damage.

The reason for this is the high speed nature of the game. This not a realistic military shooter or a high pressure environment where every shot has to count. This is a fast paced explosion of color where you’ll hardly have a moment to slow down and line up a shot. With bullets traveling relatively slowly in the air, you’ll find yourself having to carefully aim in front of a moving target to score a hit, which is easier done with an explosion than a precision petal. It's nice to see that plenty of people disagree with this, and I’ll constantly fight alongside and against people playing an entirely different way to me, but when I unlock a rapid fire Sunflower or quick shot imp, I sigh and begin saving up to try again.

That’s not to say that you are forced by your own nature to play as only one, or a select few characters, but rather you will definitely find a class on both sides of the photosynthesis that appeals to you. Experimenting is, of course, half the fun of the game, and with the variety of maps available you’ll find some work better than others given the right conditions. 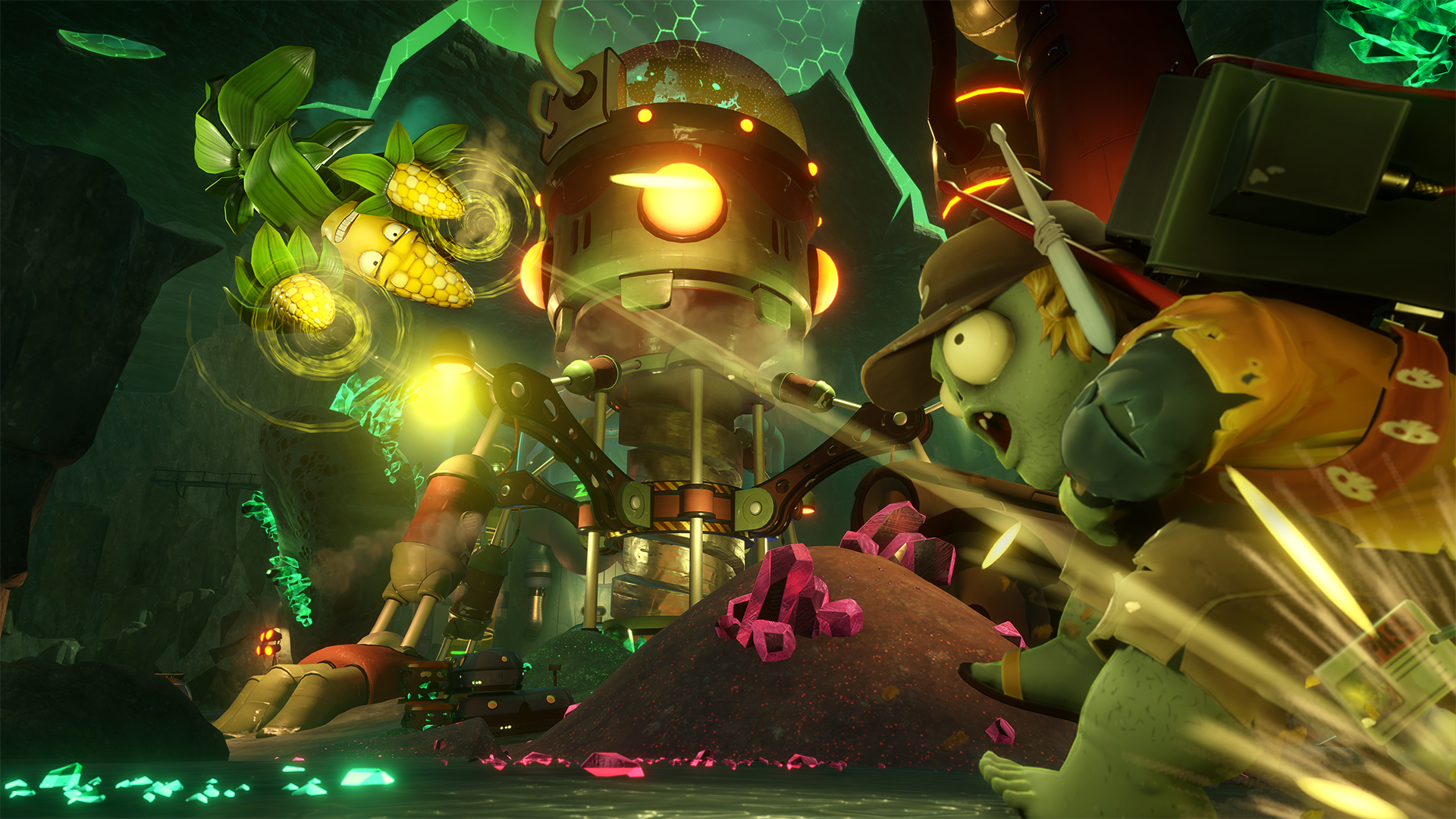 The maps are a remarkably impressive achievement. Although some feel slightly too big with a lot of empty space being wasted, they all offer unique perspectives of the same arena. Players preferring long range assaults can normally find some high perch to launch a barrage from, while those preferring to get in close with fill tight spaces and sharp corners perfect for ambushes. Midrange players will feel just at home too with wide vistas offering enough cover and clear air to volley corn and footballs are each other respectively.

The Frostbite engine once again delivers a beautiful virtual world, especially if you're on PC, while PlayStation 4 surpasses Xbox One in terms of resolution (1080P) and frame rate amidst consoles. The game also exploits the new PBR pipeline first introduced in Star Wars: Battlefront to a great degree, so that materials look a lot more realistic now even with the stylized art.

Plants vs Zombies: Garden Warfare 2 is a great, if childish, game. While it doesn’t quite offer the tactical mastery or prominent challenges as other online shooters, it is a brilliantly put together and very enterprising take on the online shooter. You won’t have to worry about traumatic losses, rogue snipers or campers, but you will have to deal with hungry venom flytraps, pirate zombies and the occasional robot if you want to play this game.