Peaky Blinders: Mastermind is a strange game to review, particularly after having previewed it by playing a third of the campaign at the time. You can't help but think that there must be something coming up that makes the rest of the game stand apart from what you've already played and wrote about, either a ramping up of the gameplay or the story. So what does this do to ramp up from the first three levels that I played while previewing the game? 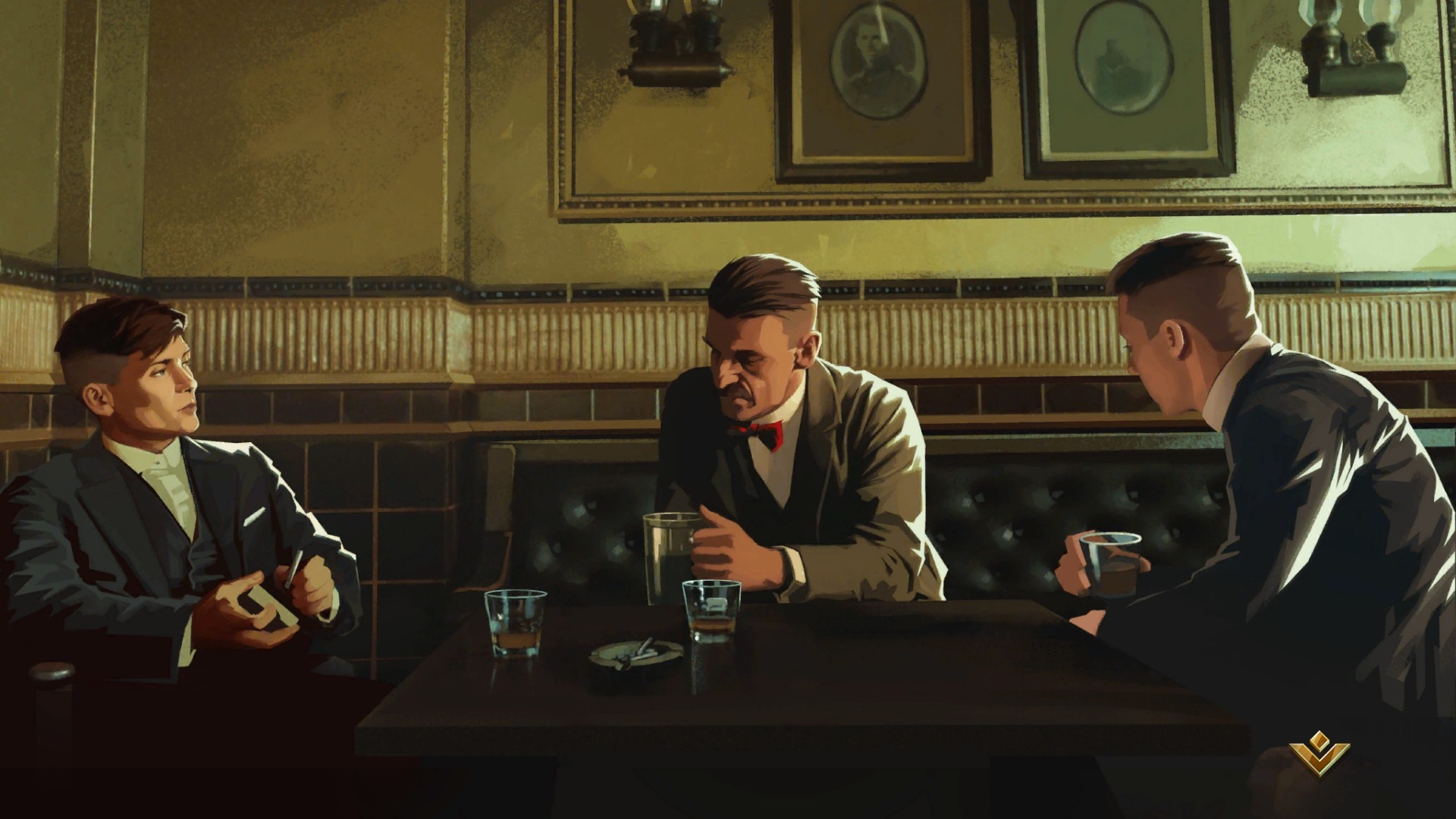 Not a great deal, in all honesty. There is a ramping up of gameplay and story, in as much as the game can actually do this. The problem with setting any game before the events of a TV series or film is that you know there are no real stakes for the characters that are there to draw you in. It's always possible to create a character, given enough time, but you'll normally find that everything just returns to status quo.

This is sadly the case with Peaky Blinders: Mastermind. You start with the boys having just come back from WW1, go through the rather short story here and return to a status quo, ready for them to be on good terms with the Chinese and go to war with Billy Kimber and go through the other events of the first season. There's an attempt to add some purpose by threatening a character and then killing him off, but it just isn't a long enough story, and nobody is given enough character to make it mean anything.

Even the six characters from the show you control feel more like one-dimensional cutouts.  Throwaway lines like Polly telling Tommy, Arthur and John that the girls had kept the family business running while the boys were off at war or Arthur telling Tommy that he's the head of the family so he should just listen to him and so forth come across as something the characters would say, just never getting the context they deserve.

The reason is simple, the story is only delivered through still images and text overlay. I can't say it looks bad, it doesn't. These storytelling moments, despite the lack of real involvement they offer, at least set the mood of the game and offer an authentic enough look of Peaky Blinders. They genuinely look good, with a style similar to that of a watercolour painting. This runs through every other aspect of the game, including the general visuals during gameplay as well as the UI, and more. 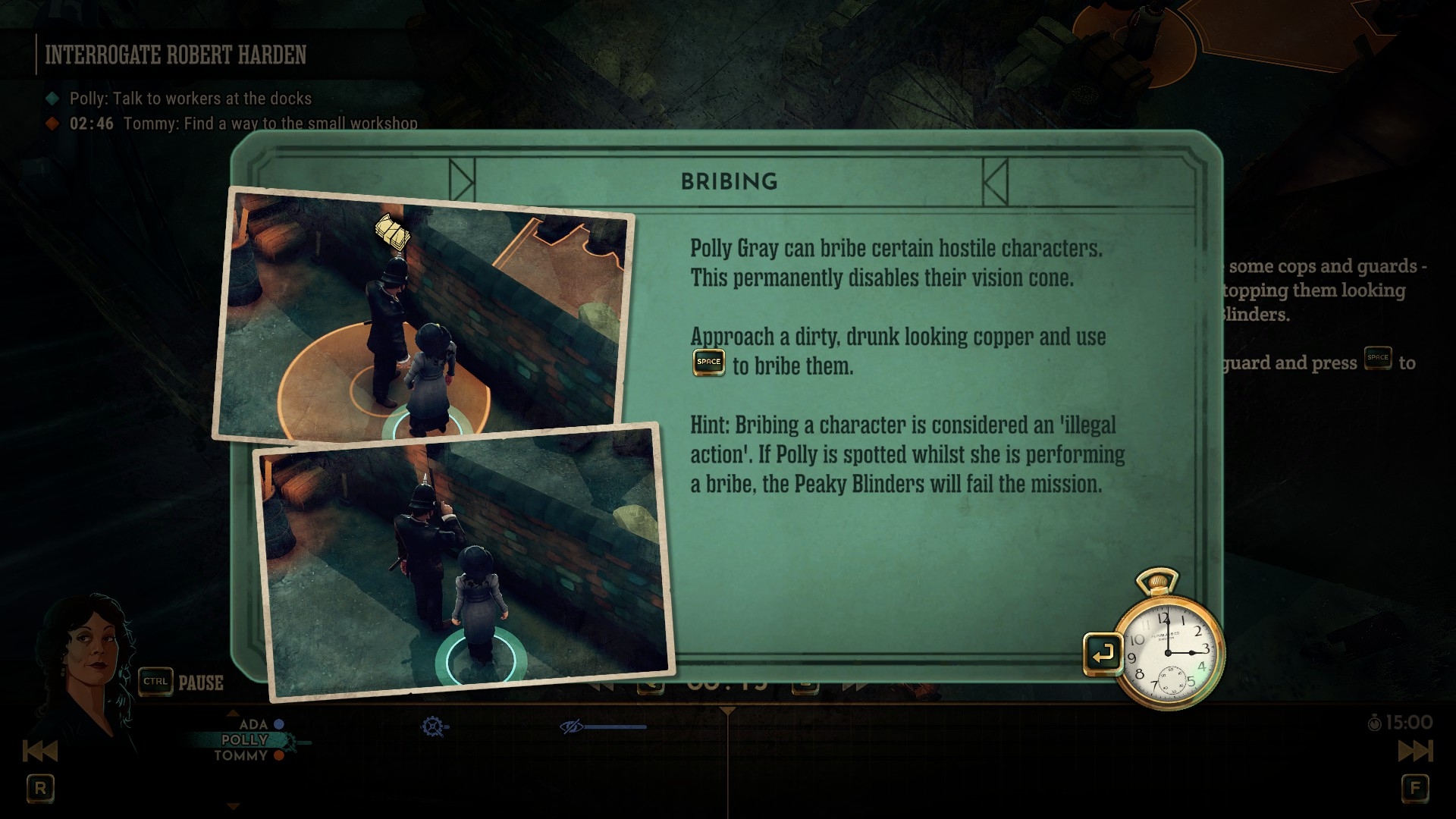 So what of the gameplay? If the story isn't anything to write home about, hopefully, the gameplay is something that will get you interested and can push the game towards that next level. Fortunately, there is a little more here of worth. Peaky Blinders: Mastermind offers real-time tactics gameplay with a twist. At any point, you can pause, rewind or fast-forward the game and the actions you have taken. Using this ability, you'll swap between characters to ensure each action they take is timed to perfection, essentially working through one of Tommy Shelby's master plans.

To perform these master plans you have to use the separate skills of the blinders. The only problem you'll find is that some abilities are only unlocked three quarters into the game, meaning earlier missions can feel a little like déjà vu. This is due to re-use of assets making areas feel similar to each other as well as the slow pace in which skills (characters, to be precise) are made available.

The saving grace is literally that the skills genuinely feel interesting to use and fit in well with the characters, with the puzzles working great, letting you logically deduce which is the perfect moves to make. It's a perfect tie-in to the time-twisting mechanic and I honestly wish the end of each level would let you simply play through the actions real-time. You can if you rewind to the start and hold the key to move time forward. The game should offer it without the workaround, a missed opportunity.

So yes, the gameplay is decent. The main issue after the fact is that once you've played through it, there's honestly no reason to have another go. The puzzles are the same and there is always the one real solution, the only challenge then is doing it within the shortest possible time to hopefully get the gold ranking. Also, there are stopwatches in the missions, acting as collectables that unlock... nothing? They're seemingly there for the sake of saying "we have collectables". 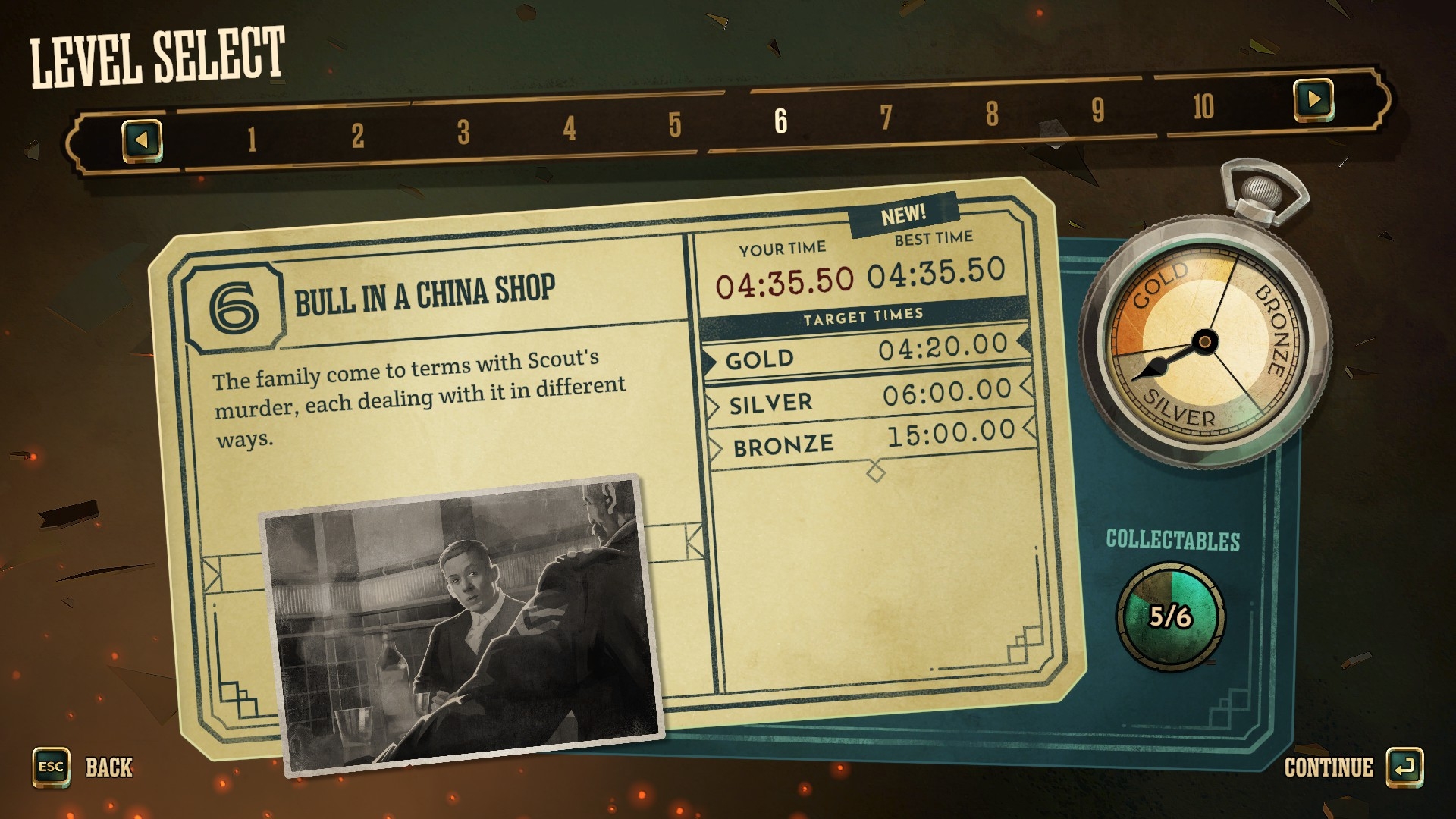 It makes perfect sense that Peaky Blinders: Mastermind is a budget title. Costing £19.99/$24.99, it's not what I'd class as overpriced for what you get because, at the end of it, it's a decent enough game. Sure, there's not a great deal of replay value, not unless you want to get gold rank and collect all the stopwatches, but I personally can't see a reason to do that other than some strange need to collect everything. I don't have this urge.

As an extension of the Peaky Blinders IP, this isn't a bad attempt. It's a vast improvement on Curve Digital's Narcos game, though that isn't a great deal of praise since shoving your arm in a wasp's nest is an improvement on that. Peaky Blinders: Mastermind doesn't offer any real stakes, the characters you care about are going to survive. It's just a reason to be the Shelby family and join in one of Tommy's plans and these plans are alright.

If you're a fan of real-time tactics games like, say, Jagged Alliance or Commandos, or just like puzzles, this will pass some time and you'll find it reasonably enjoyable. I do think that 'reasonably enjoyable' is the best you can say about the game. It's inoffensive and it works, it's just that it doesn't do anything to make itself stand out.

Peaky Blinders: Mastermind is an average game at best. It features interesting puzzles and a decent enough art style, but the story feels shallow, offering nothing major to draw you in. It does feel like Peaky Blinders at face value and the puzzles, with the time-travel mechanics allowing you to create the perfect plan, makes you feel like you are part of one of Tommy Shelby's schemes, but this is still mostly superficial. It's short and inoffensive but, at the same time, it doesn't do anything to make it feel more than 'average'.