This is the new H510 Elite from NZXT, a more modern and feature-rich take on their exceptionally successful S340 Elite lineup. The idea here is to take the already well-received H500 and turn things to 11 with an integrated smart controller, RGB all over, and even more glass than before. Let's kick things off with this unique midtower by starting at the top where we're greeted by a single fan mount that comes unpopulated on the H510 Elite, which is a bit unfortunate as it would have really added to the premium feel that the rest of the case received. But follow down towards the front and you'll find the backlit power button that doubles as the storage activity light and next to it is the USB 3.0 type A and type C connectors along with a combo mic and headphone jack. While NZXT does provide a splitter cable I have to mention that separate jacks would have been my preference along with at least an extra USB Type-A port as the single ports do take up an entire header on their own internally, but it does keep the top exceptionally clean. 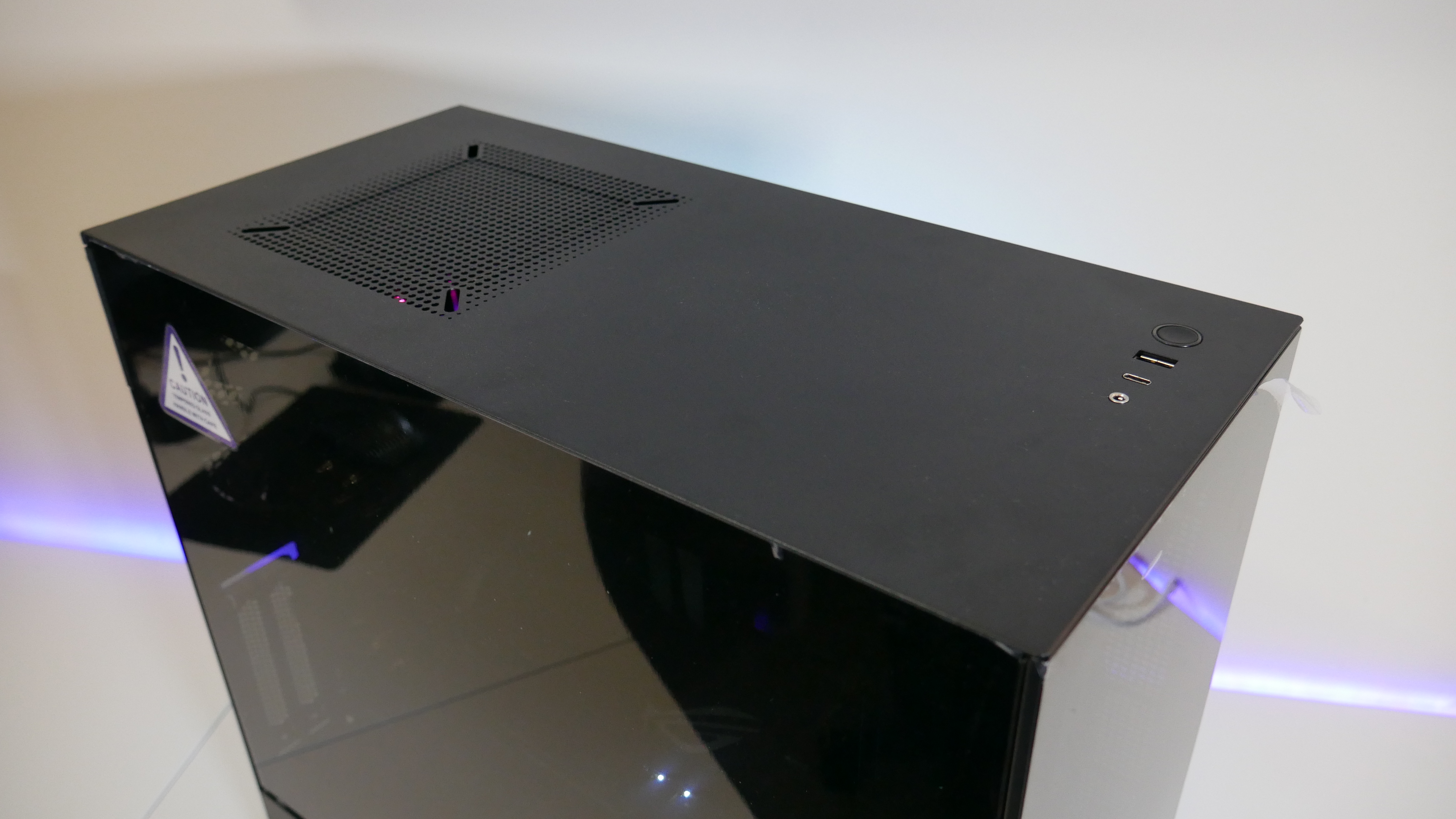 Moving down the front of the case is where a big shakeup in the H500 series as it's no longer just a solid piece but rather tempered glass with a nice dark tint and that pattern wraps around to the left side of the case as well, normally I'd break these parts up in explanation but you really have to see it all together to see the nice aesthetic that it was going on, and just under the glass is the base of the case that gives the appearance of the glass floating. The front tempered glass panel is held on by a couple of screws that you can easily remove if you need to take the panel off for whatever reason, but the side panel is held in place by a single captive thumbscrew on the back and the pulled loose from peg holders, kudos on that design as it keeps it sleek and secure with the bottom slipping into a slot in the case. 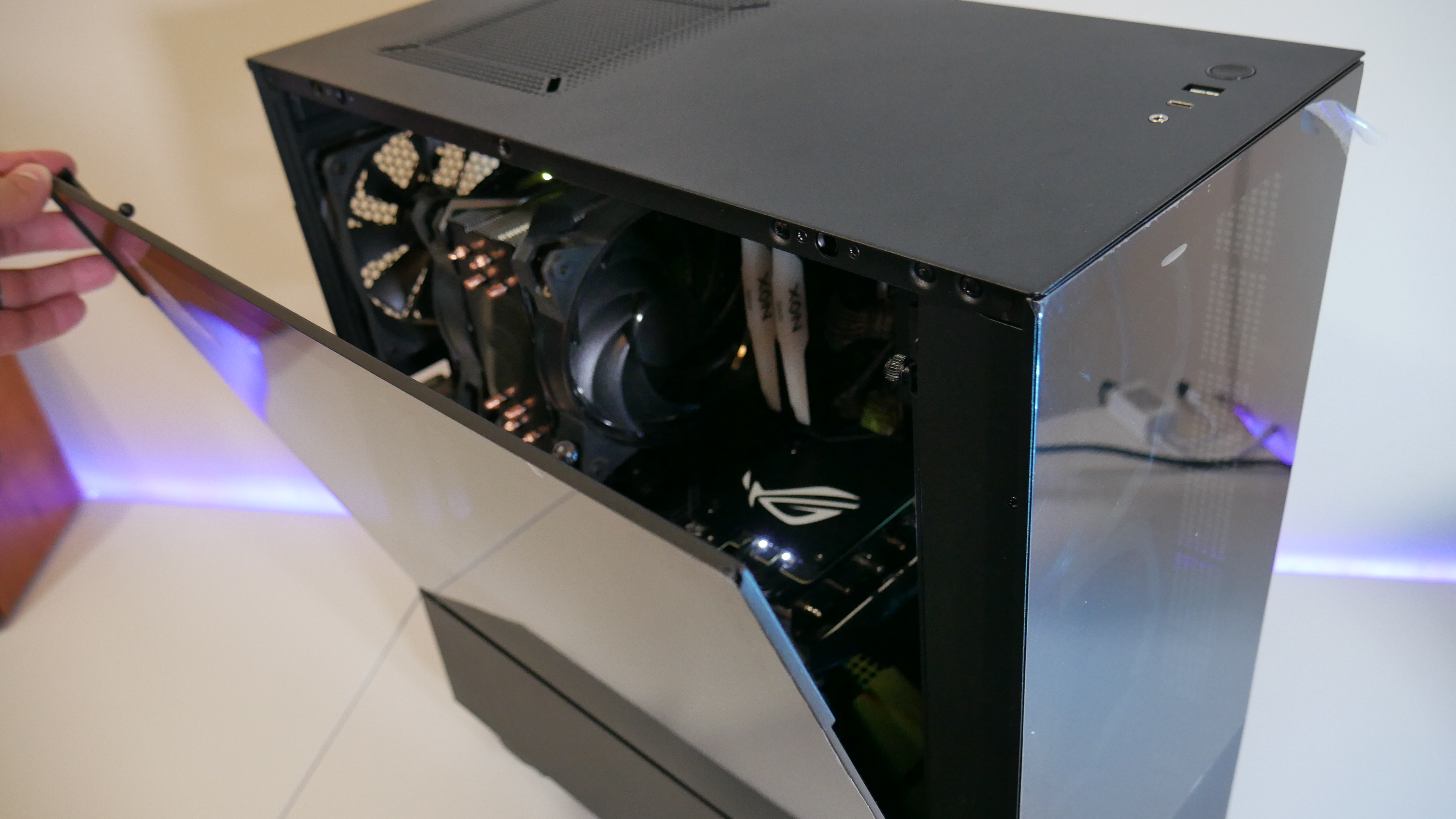 The right-hand side of the case is usually as boring as it comes, but this time they've integrated the air intake and dust filter into it, slick design that allows for pretty good airflow as we'll visit again later one. The bottom of the case has another air filter allowing for more air to be drawn in from the included AER 140 RGB fans that are included in the front of the case, but the bottom also has access to the removable 3.5" drive cage as well as the power supply dust filter that is pulled from the rear, ah to have a side addressable dust filter, oh well.

The back of the case is pretty standard and usually, I would have a grievance with the PCIe expansion slot screws being accessed from outside of the case, but I feel like they did a good job here. Thanks to the included vertical GPU mount, which doesn't come with a rise cable and sides suspiciously close to the side window but that's a different story, that mount is removable with a single thumbscrew making for some of the easiest access to the expansion slots I've ever experienced. Oh yeah, there is also a non-RGB AER fan in the rear, an RGB version would have been killer here but Other than that, nothing to write home about. 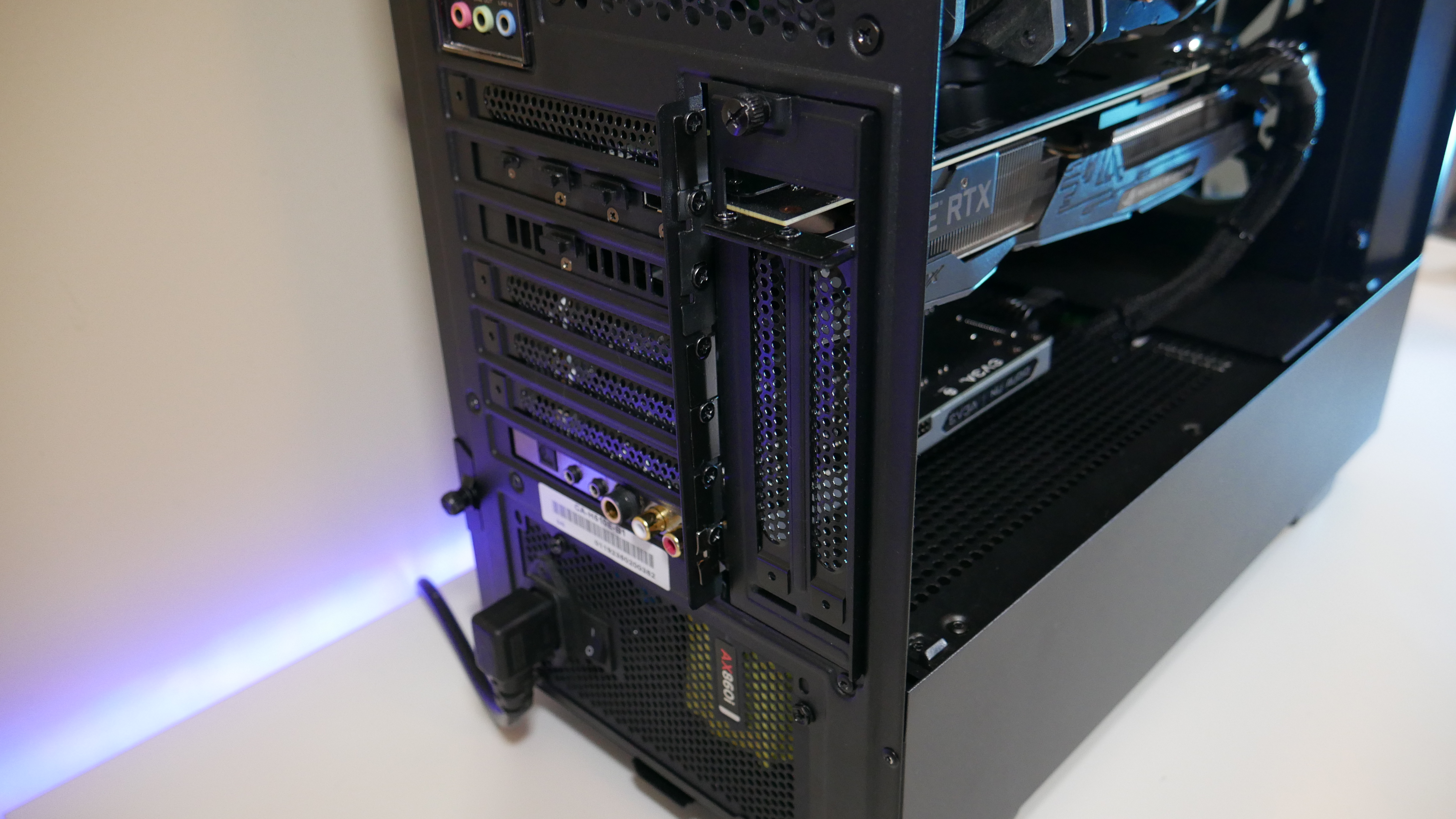 Now onto the inside! starting with the motherboard tray area. The case accommodates motherboards from ITX to ATX, but there's a small version of this case if that is genuinely what you need. We see a return of the much-appreciated cable bar with a much wider opening for the 24 pin which is a welcome feature. The power supply shroud at the bottom is entirely perforated allowing for installation of the power supply in whichever orientation you want and still has the cutout for the graphics card power cable if needed. The front fan mount is something I'm a huge fan of with the ability to be removed for mounting replacement fans or a radiator, but with the Elite it comes pre-populated with AER 140 RGB fans. Along the top of the case where the missing fan is, yeah not too happy about that one considering the price, is a really solid and well mounted addressable RGB strip, that surprised me because I initially thought it was just the fans that were RGB.

for builders the backside of the case can make or break the experience, the H510 Elite delivers, offering up ample room under the Power supply shroud to slide your power supply into place and the 3.5" drive bay that holds up to 3 drives is vastly improved over the S340 design since you can easily remove the cage for installing drive or to toss out if you don't need it. There are two sleds for 2.5" drives if that's your thing and they're located in easy to reach spots in the middle. The two killer features for cable management are the EPS cable guide, did not think I would find this as nice as I did, and the 24-pin cable guide with velcro straps. These made basic cable management a breeze, but what about that smart power box on up there with the nest of wires you say?

This was actually something I was concerned about but turned into being one of the surprising things, it was stupid simple. I just zip-tied all the cables together like they were, plugged in the SATA power connector and the USB 2.0 header, so you'll need to have one of those available and done. But the killer thing when wiring this up is that the front panel connector, provided your motherboard has the proper layout so check that, is ONE PIECE! Meaning I didn't have to fight with a bundle of loose wires, just simply plugged in the front panel and boom, done. Now if your motherboard has an oddball front panel grid they have an adapter you can use so don't let this scare you. The CAM software was next and I would lie if I didn't say I was concerned about using this, but it's great. All the information I needed was easily accessible and I got right to customizing things right away and set everything to silent and purple, I think maybe RGB is lost on me as I prefer a static color, but RGB allows me to pick and change if choose to later that at will so it's a win. 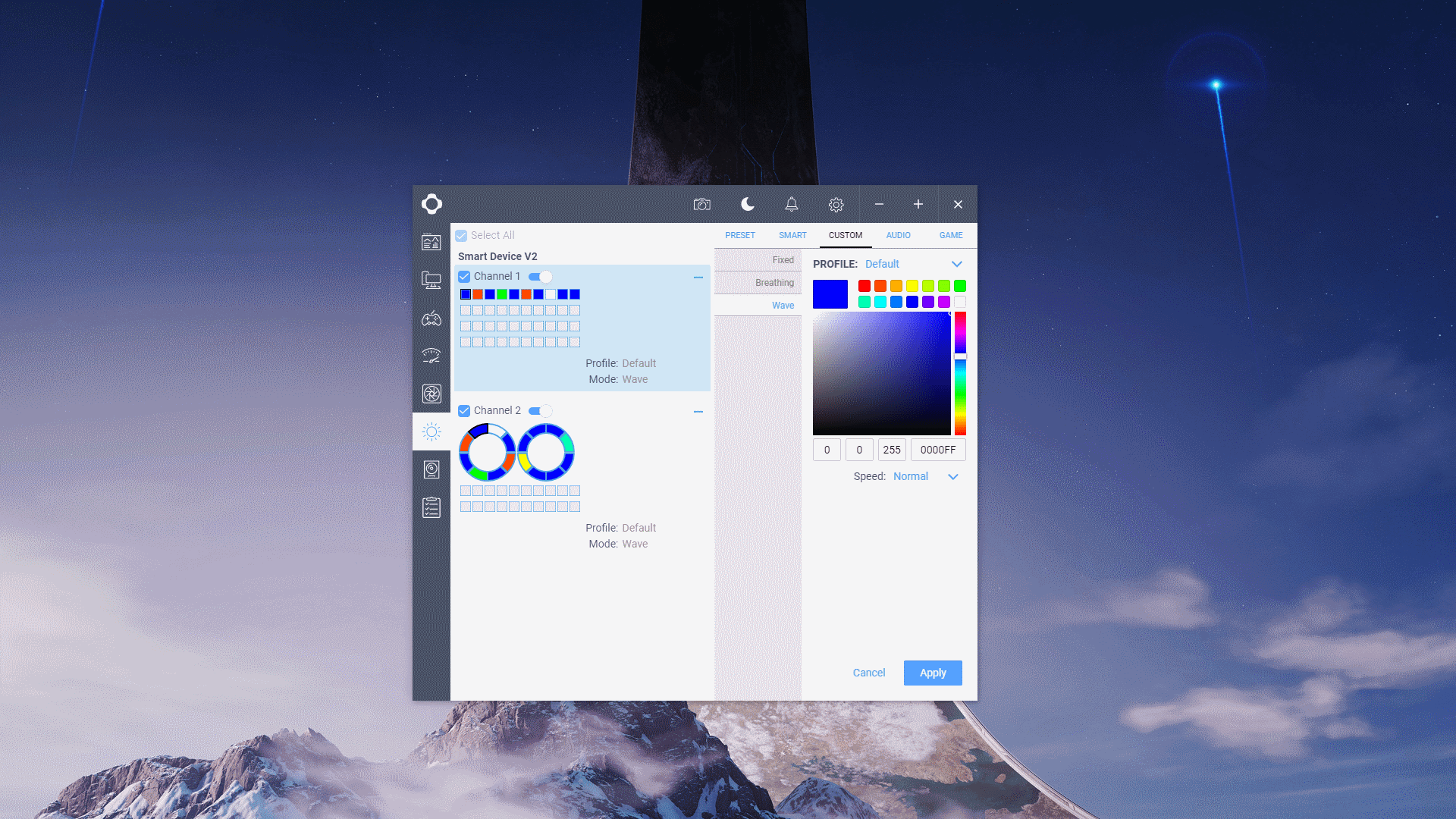 So I did take note to record some thermal measurements because I was curious as to how this case performs in that sense because it's much small and appears more restrictive than the Cooler Master H500P Mesh I've been using for so long. My main system general specs at the time of working on this was a Ryzen 7 1700 at 3.8GHz and an RTX 2070 Strix, and turns out even on the silent preset it's not much warmer when either the GPU or the CPU is under full load, but combine them and the H510 Elite is a tad warmer, but nothing to worry about.

So to wrap it up, the NZXT H510 Elite takes the H500 series and puts a crown on it by offering a gorgeous case that performs well and has the features to flaunt. Not a big fan of the lack of a top fan [EDIT: NZXT will now ship case with a fan, and if you bought already they'll provide one free of charge] and a non-RGB fan in the rear, as well as the limited front or top panel rather I/O especially for a case at this price point. That's where this one will get you, if you're here in the US of A get ready to shell out $169.99 for this bad boy, everyone else around the world should be able to shave about $20 off the asking price as we're getting to pick up the tab for the tariffs. Is it worth it? hard to say, the core of the case can be had for nearly $100 less, but it's a very basic version, this one has the gorgeous tempered glass on the front along with the better RGB fans in the front, a nice RGB strip in the top along with the new Smart Device V2, all of these combine to make for one of the most builder-friendly experiences I've had to date, and that's worth a fair penny in my book you'll just have to ask yourself is that convenience worth it to you.

The NZXT H510 Elite takes the H500 series and puts a crown on it by offering a gorgeous case that performs well and has the features to flaunt.

Deck Your PC With NZXT’s HUE 2 Lighting Products This Christmas!