4K gaming has been the goal for many for a few years now, but unfortunately that often meant you were going to be limited to 60Hz unless you got ready to strap a few cables to a single monitor and do some overclocking. The only way around those limitations was dropping $1100 or more on a top tier gaming panel, until now. The Nixeus NX-EDG274K dropped not long ago with a full UHD 4K display featuring a massive 48-144Hz Variable Refresh Rate and doing it all with a single DisplayPort cable thanks to DSC (Display Stream Compression) support. At a palpable asking price of $899.99 the NX-EDG274K offers top-shelf features at a more budget price point, but does it deliver a good enough experience to keep you from continuing to save for the other guys?

The Nixeus EDG274K comes in a rather adorned box that makes unpacking exceptionally easy, and kudos to Nixeus for using soft-cell foam padding rather than hard cell foam we know the monitor will stay nice and safe during shipping.

Inside the box are the monitor, power adapter, display port cable, and base. This is great meaning the stand is already attached, assembly is as simple as aligning the screws on the stand with the base, twist, and screw in the lock screw, done. 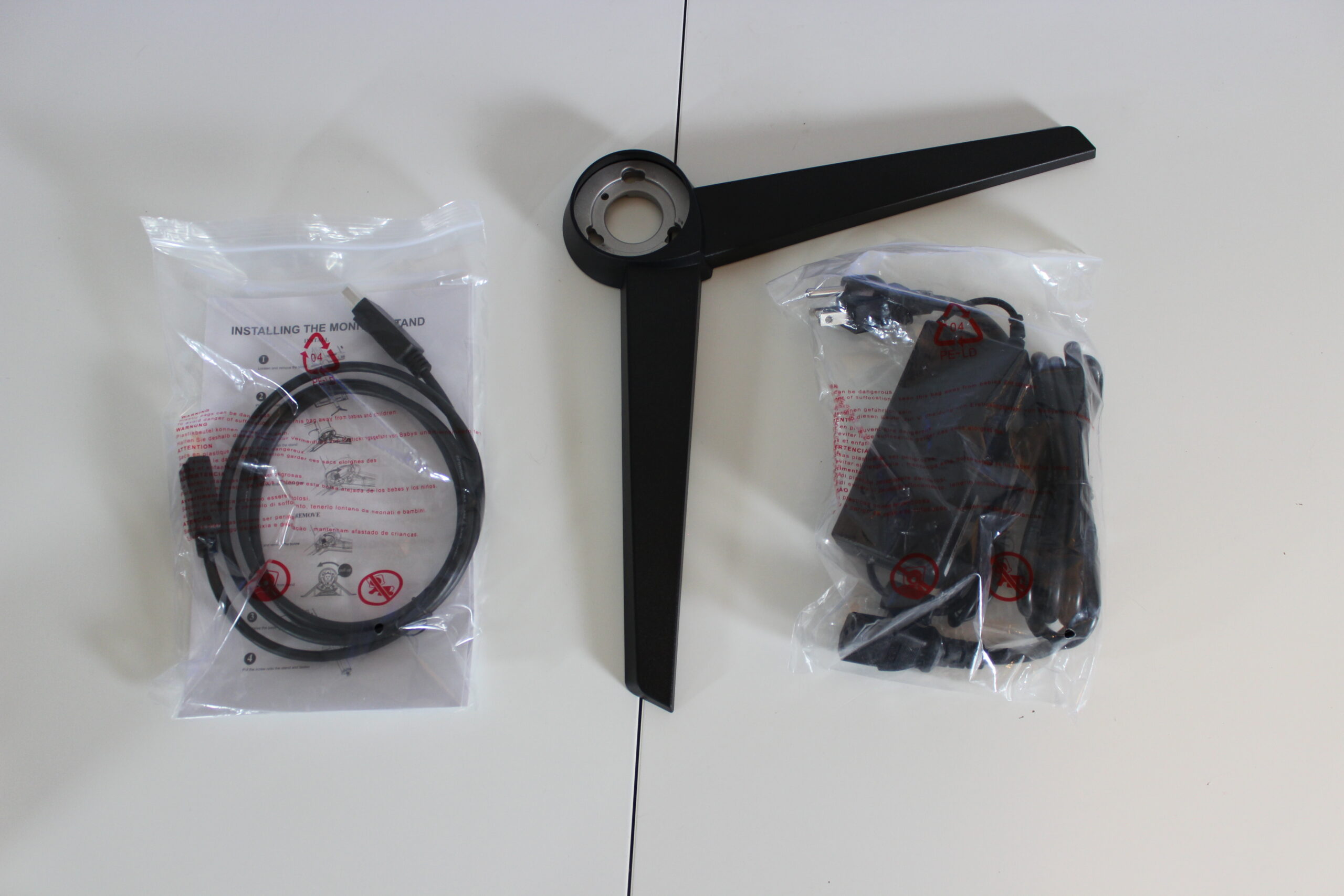 The Nixeus EDG274K comes in one flavor and that comes with a fully adjustable stand. The EDG274K's stand is the same one that they shipped with the NX-EDG24 and for that panel it was fine, but here it feels like a bit of a downgrade over what they shipped in the past. Their VUE24A, EDG27, and EDG34 all came with what I consider a more premium stand. 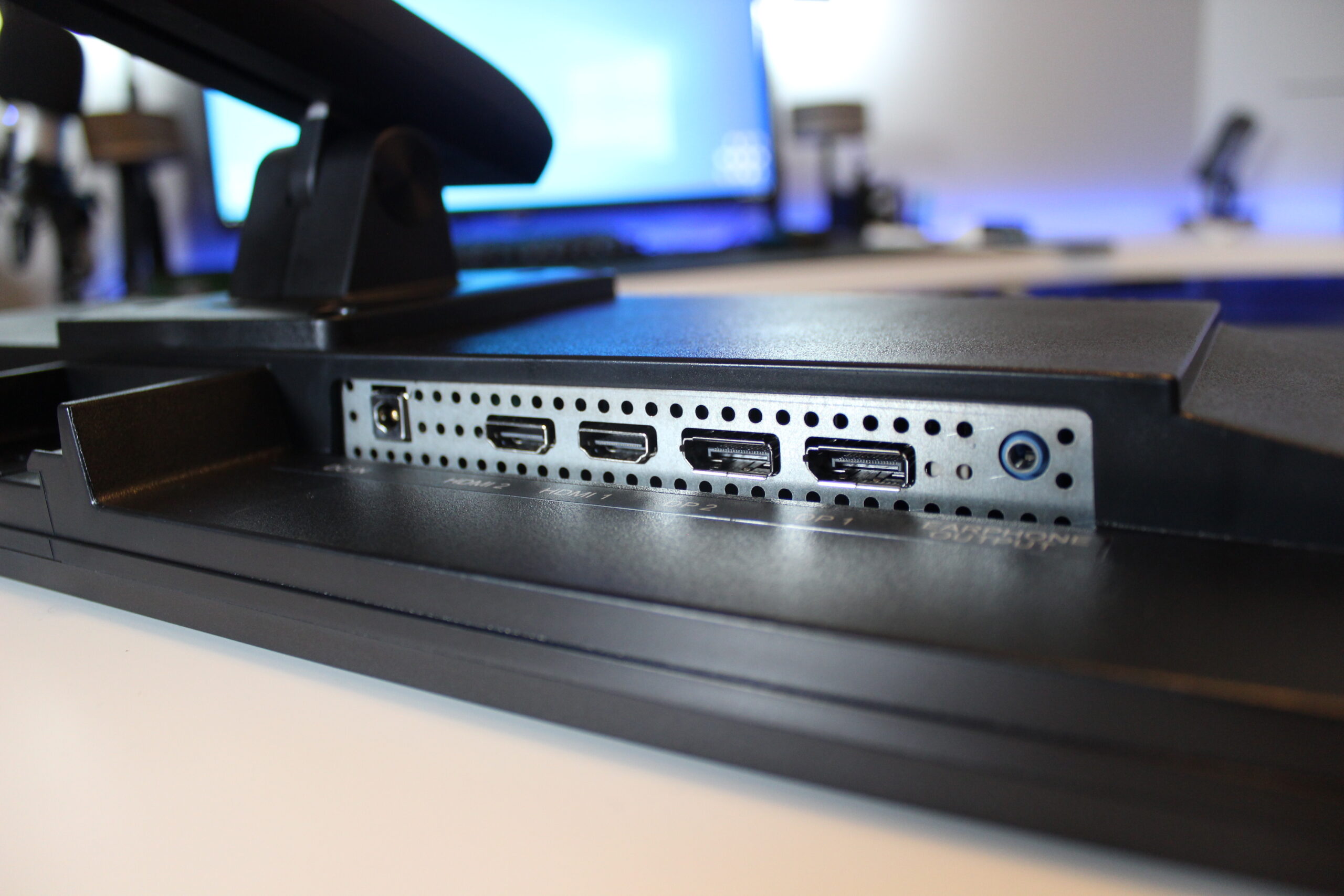 DSC or Display Stream Compression is a VESA standard for enabling visually lossless compression for UHD displays allowing for high refresh rate and HDR across a single cable. Yes, a single cable. That's kind of a big deal considering so many of the less costly 4K 144Hz panels achieve that refresh rate by using multiple cables and still need to have the monitor manually overclocked. The NX-EDG274K does 144Hz native without any need to overclock or any funny business as at all so long as the GPU you're using supports DSC.

The Stand and Bezel

The NX-EDG274K is wrapped in all plastic from top to bottom but keeps the aesthetic completely blacked out so it's void of that 'gamer' vibe. The stand is the same one they used for their EDG24 which was fine for a smaller 24" panel but feels a bit small for the larger and more premium 27" panel that the NX-EDG274K presents with it's $900 asking price.

The stand does however offer full height, tilt, swivel, and 90-degree rotation for portrait mode if that's your thing. All of the motions of the NX-EDG274K are rather stiff, but that's a good thing as you don't have to worry about bumping it and it going out of your desired height or angle you've set it to.

The bezel is much slimmer than what Nixeus has offered in the past with their 16:9 panels but the fit and finish are a little off with one corner showing a bit more molding bleed on the top right than the rest of the panel displays. I personally find the overall feel and finish of the bezel and backing to be nicer than most plastics since it's quite stiff and feels dense rather than a hollow cheap plastic, but plastic it is nonetheless. After all, these seem to be the only concessions with the NX-EDG274K hitting it's price target so all in all, not a bad showing.

The 3840x2160 144Hz DSC complaint panel is where the money is at with this package. Sporting 2 DP inputs and 2 HDMI 2.0 (along with built-in speakers) means you can easily run anything that pushes out a 4K image to this and let it be the centerpiece of your office's multimedia world. Color gamut results show the NX-EDG274K is able to hit 100% of the sRGB range and 84% of the AdobeRGB range. While that might not make it the professionals choice for color accuracy this panel is marketed at gamers and it delivers in that respect but is also good enough for hobbyist editing.

Screen uniformity is pretty good too at 50% brightness and the backlight up to 350nits for vivid images and gameplay. This means you won't have to worry about brighter or darker sections being visible while using the monitor. Angles are good with only the upper right side showing a bit less than desired results, but if you're sitting anywhere remotely in front of the NX-EDG274K you're going to be in for a good time.

Spending some time with Blur Busters tests we find the panel better than expected for having a 4ms Gray to Gray response time. The UFO test does point to the slightly slower response time for the AHVA/IPS panel but that's to be expected and not unusual at all. The game scrolling test makes it very easy to see the benefit of the 144Hz refresh rate over the typical 60Hz you see with most 4K panels. The  ghosting test reveals the dreaded ghosting for when you're in very high contrast scenes but it's not distracting amount, you'll need to be looking for it in order to be bothered by it. 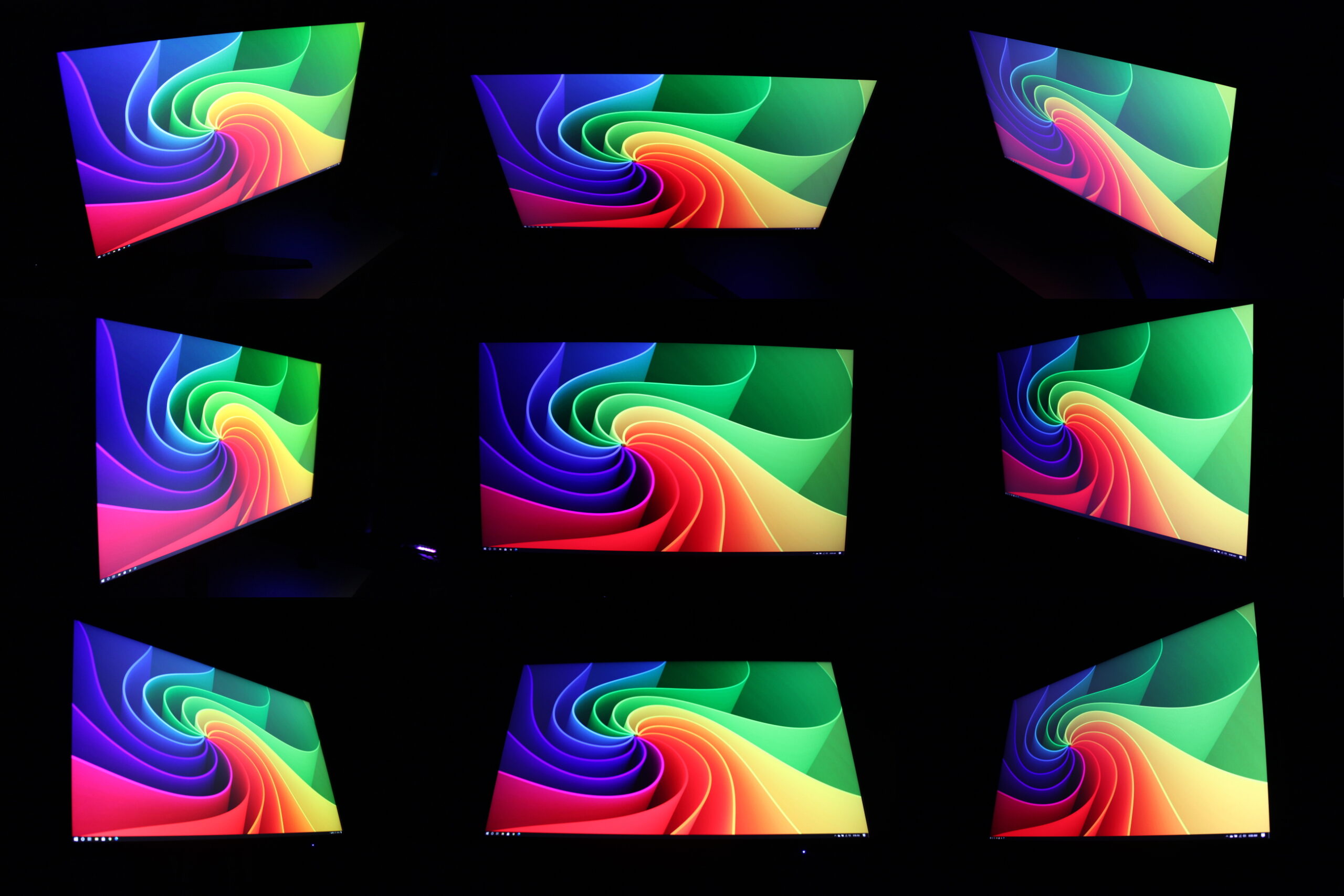 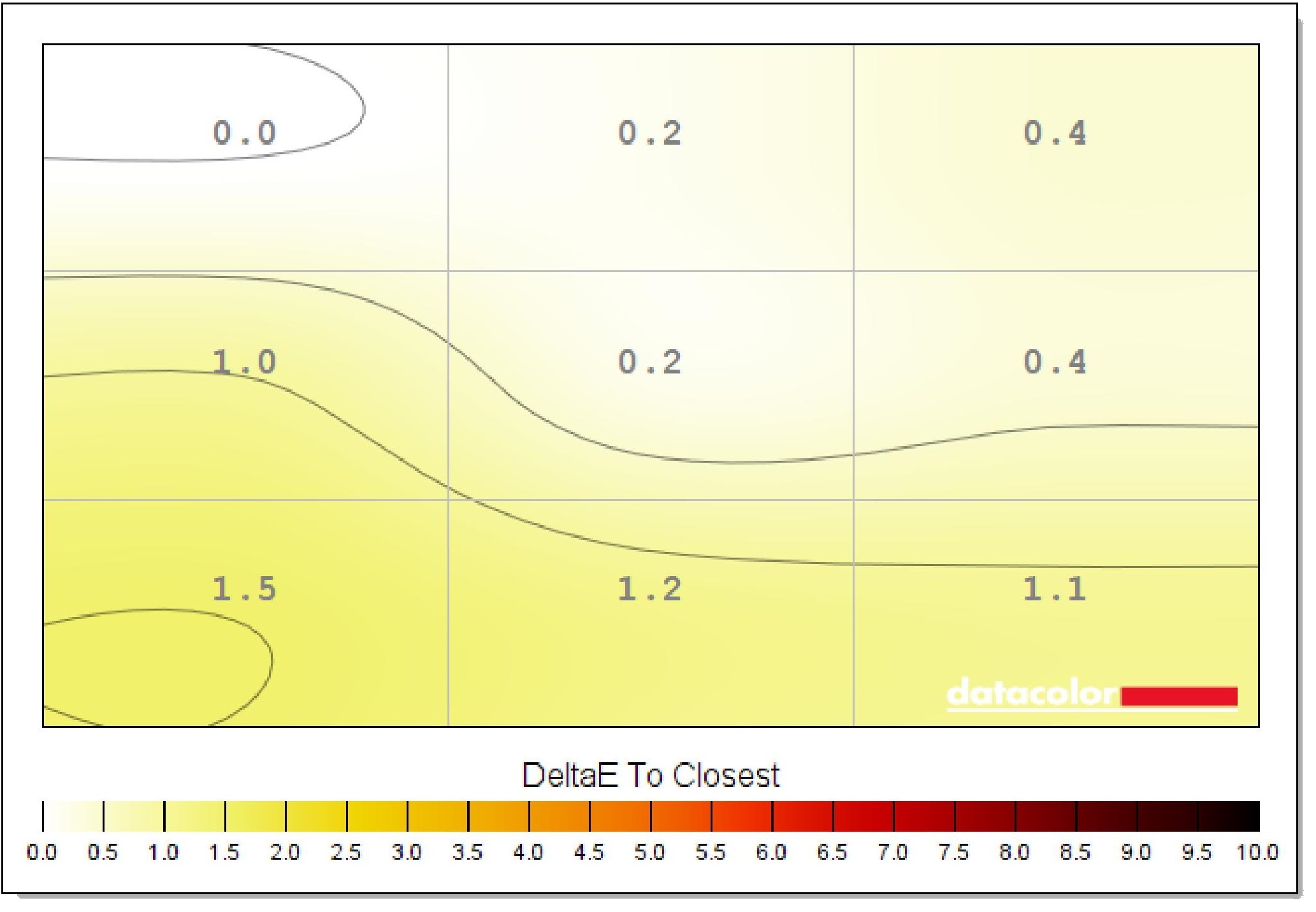 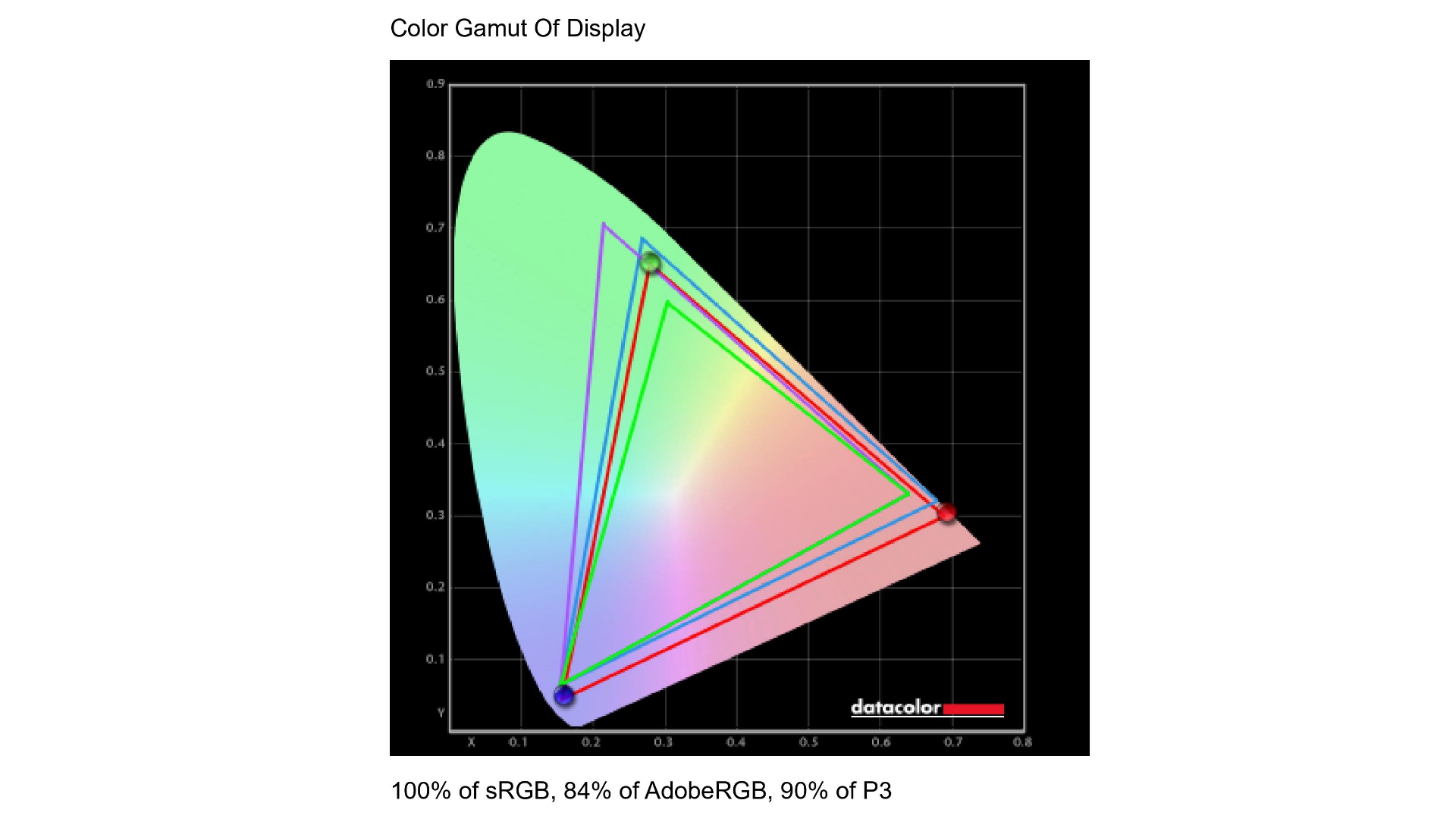 Looks like Nixeus' Achilles Heel shows back up. For every good step, they made with the NX-EDG34 they've undone with the NX-EDG274K. It's not so much that the buttons are on the back of the panel, but rather that they don't coordinate with the nomenclature on the front meaning you'll have to get a feel for which button you actually need to push. Thankfully once you get the panel set up the way you want it you'll likely not find yourself venturing back into the OSD very often. At least I hope you won't.

But if you do have to dig in there you'll find it at least organized well and easy to find what you're looking for with Picture settings, Color settings, HDR settings (it does support HDR 400 even though they don't market it), and the Advanced settings where you can really dial in the overdrive where you want it. 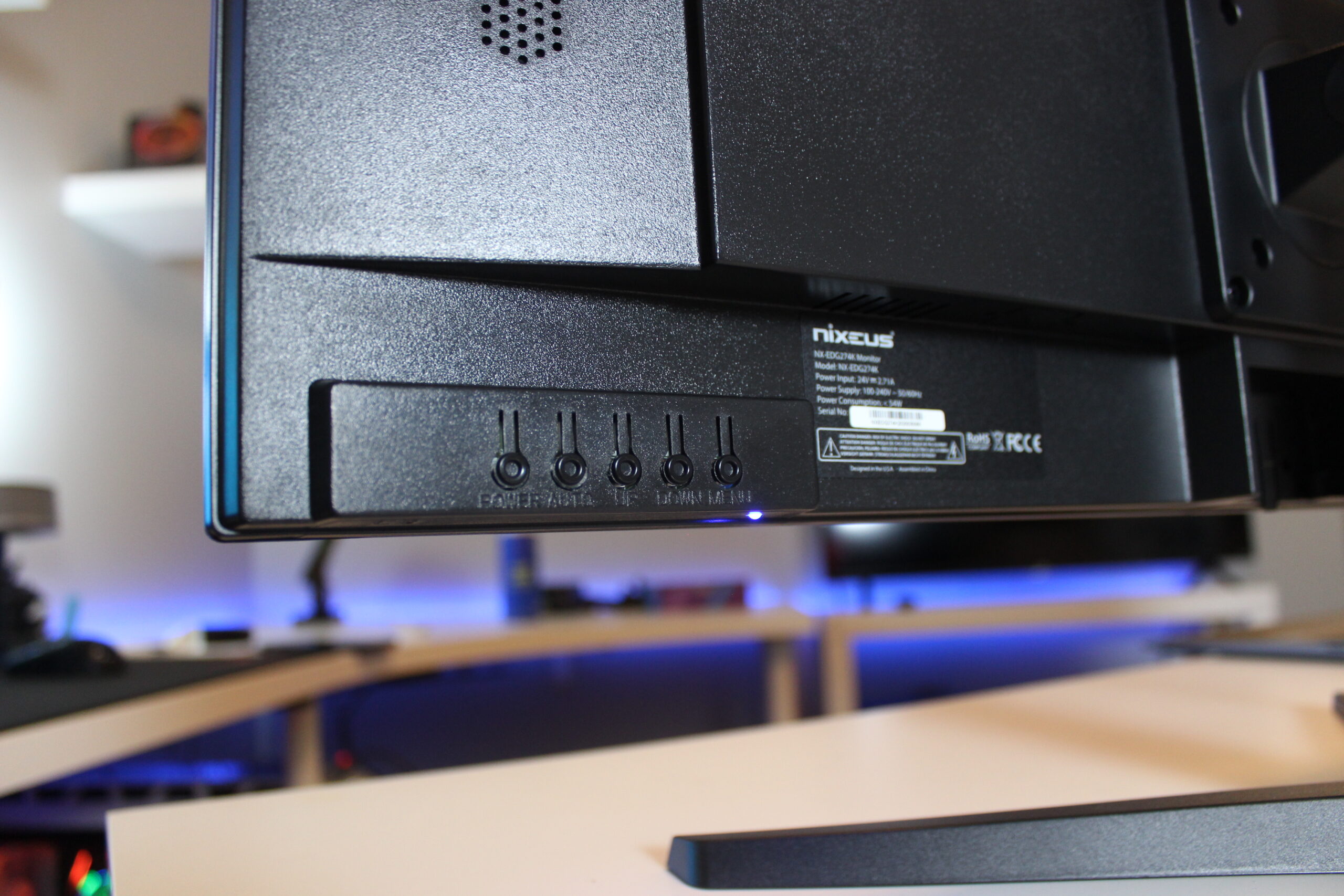 I'm gonna cut to the reality, gaming on a 4K 144Hz panel doesn't come cheap or easy. I don't want folks to get this magical idea that because they buy a high refresh 4K panel then suddenly they're going to be able to push it. Now that aside I gamed on this panel for quite some time using more higher-end cards like the RX 5700XT and the 2080 SUPER originally. I was trying to avoid 2080Ti because, at the time, it was a $1200 card and felt like that priced consumer would likely go for the $1000+ 4K 144Hz panels. But even with those two cards, the gaming experience in modern shooters was quite good, especially with VRR enabled. But the panel really opened up when the RTX 3080 showed up.

I used this monitor for the entire review process of the RTX 30 Series cards I've published and even those I haven't yet and it's really improved my opinion of this panel. It went from a good experience to an amazing one. Now, this isn't me goading on about the RTX 3080 or 3090 for that matter but if the next generation RDNA2 cards come close or beat the RTX 3080 then THIS panel is going to be an easy recommend for that kind of horsepower. Pushing all the games I was playing into and staying in the VRR window meant EVERYTHING was like butter, straight melted BUTTAH.

I say that to say, you're going to need some horsepower to really drive this one. But you don't actually need all that much power if you're wanting the 4K panel for lighter games and are more interested in the desktop real estate for whatever reason. Maybe you're someone working on multiple projects at once, several docs going with spreadsheets as well but the game when you have the time. If that's you then you might be perfectly happy with a solid 1080p card and with integer scaling, you'll still get to enjoy a crisp 1080p 144Hz experience without breaking the bank on a GPU. 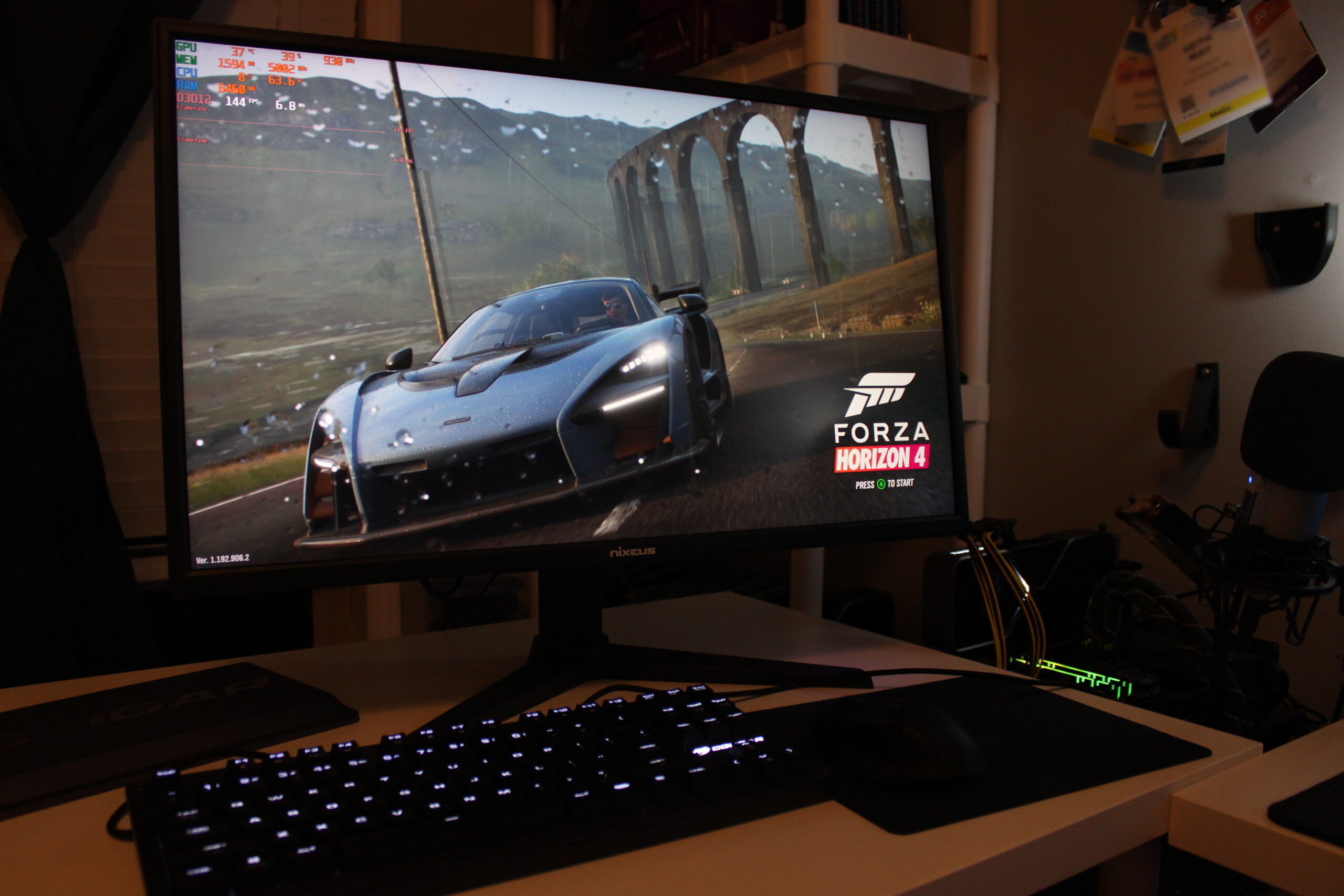 In a market where most 4K 144Hz panels are going to cost you north of $1100, the Nixeus NX-EDG274K does offer up the excellent value at well under that mark with an MSRP of $899.99.  The overall experience of being Freesync Premium validated with a wide 48-144Hz VRR window means you'll get one of the widest range for tear-free gaming. The inclusion of DSC support means you're not going to compromise on the image quality or have to deal with multiple DisplayPort cables and overclocking the panel, it just works.

There are even hidden creature comforts like HDR off in there that aren't even marketed. While there are going to be debates on the quality and usability of HDR 400 the fact that it's present and they don't use it as a marketing crutch means that you're getting it without the fluff and markup others would bestow upon their customers.

The only two areas of complaints come in the form of the stand being a little less than desirable and the buttons for the OSD making navigation difficult. The stand is adequate, but this is a more premium product with a quite the price tag, perhaps that solid stand they used with their old VUE24A would have been much more welcome here. The button situation for the OSD could possibly be updated through a firmware update but I'm not certain. Once you've got the panel setup then you likely won't spend much time in there so it's not really a deal-breaker.

The image you're going to get from the Nixeus NX-EDG274K is going to be quite pleasing for gamers out there. It's bright with hitting 350nits without issue and can go further if you want to give that HDR400 a spin. At it's $899.99 asking price it demands your attention if a quality 4K 144Hz gaming experience is what you're after and don't want to deal with the 'buts' that come with lower cost monitors that try to pose with a similar price tag.

At it's $899.99 asking price it demands your attention if a quality 4K 144Hz gaming experience is what you're after and don't want to deal with the 'buts' that come with lower cost monitors that try to pose with a similar price tag.