Ultrawide gaming has been on a steady rise for quite some time, so it's no surprise to see more and more manufacturers getting in on the action. Looking at something as simple as the Steam hardware survey and you'll see the form factor is nearly on par (including 2560x1080 and 3440x1440) with 4K panel usage on there. This is why in our latter game performance reviews we have been including ultrawide resolution performance along with standard 16:9. The latest to enter this segment of the market is Nixeus and with a strong record of releasing top-notch panels, our expectations are pretty high for this one. The EDG34 features a 34" 3440x1440 VA panel that features a native 144Hz through Display Port 1.4 but only 100Hz through HDMI 2.0. Through the DisplayPort 1.4 connector, you'll have access to the 48-144Hz FreeSync range, and while that's not quite the 30-144Hz the VUE24 and the EDG27/24 deliver it's still a nice wide band that gives you access to low framerate compensation. Can this feature-packed 34" panel deliver at the very palpable $600 price point?

The Nixeus EDG34 comes in a rather adorned box that makes unpacking exceptionally easy, while it's using hard cell styrofoam for the protection of the monitor that didn't appear to cause any issues in transit. The included video we go over the packaging and initial look at the monitor assembled.

The Nixeus EDG34 does come in two flavors, one with a tilt base and another that has a fully adjustable stand. The EDG34S with the stationary stand is what we're looking at today and features a headphone/headset stand at the top and it shows off the light bars behind the panel.

The stand is fairly basic in all respects and only has a few functions outside of holding the monitor up. The design is attractive with the wide-spanning feet only extending as far out in front of the panel as the panel actually sits, meaning it isn't going to take up an absurd amount of desk space and reducing room for your mouse and keyboard. Cable management is minimal being just an open area to guide the cables going to the display in an orderly fashion. Tilt is the only adjustment this stand allows for but thankfully it's a quite smooth and holds its position, but if I might make a suggestion, spring for the fully adjustable stand as it sits a bit low, so if you're the average height at an average desk prepare to look downward at this display. There's also a headphone hanger on the back on the stand, kind of an odd choice but it's there and it works so if you need somewhere to hang and hide your wireless headset when you're not using it then that's a bonus.

The Nixeus NX-EDG34 is powered by the latest Samsung VA panel with a 1500R curve. The colors are vibrant, the whites pop and the blacks are deep. Overall the image is excellent for gaming, what about accuracy for content creation? Well according to our Datacolor Spyder 5 and DisplayCal dial it in with brightness set to 66% as it came set to we see the EDG34 sitting at 356 cd/m2 which is quite vibrant for that setting. Once calibrated the panel had a 99.3% sRGB Gamut coverage with 125.9% sRGB Gamut volume, Adobe RGB Gamut coverage is at 81.6% while the Gamut volume is at 86.7%. While I would argue this for the professional photo editor who needs that Adobe accuracy it's clear that this has excellent coverage for gaming and media use and is better than most gaming monitors.

Viewing angles are excellent no matter where you sit, but the very nature of the curve does mean that the best seat is going to be directly in front of the screen. From angles outside of direct view, there is a bit of a glow that comes from the screen that washes the colors out a little, something to think about if you're often sitting to one side or the other while watching movies or playing games. 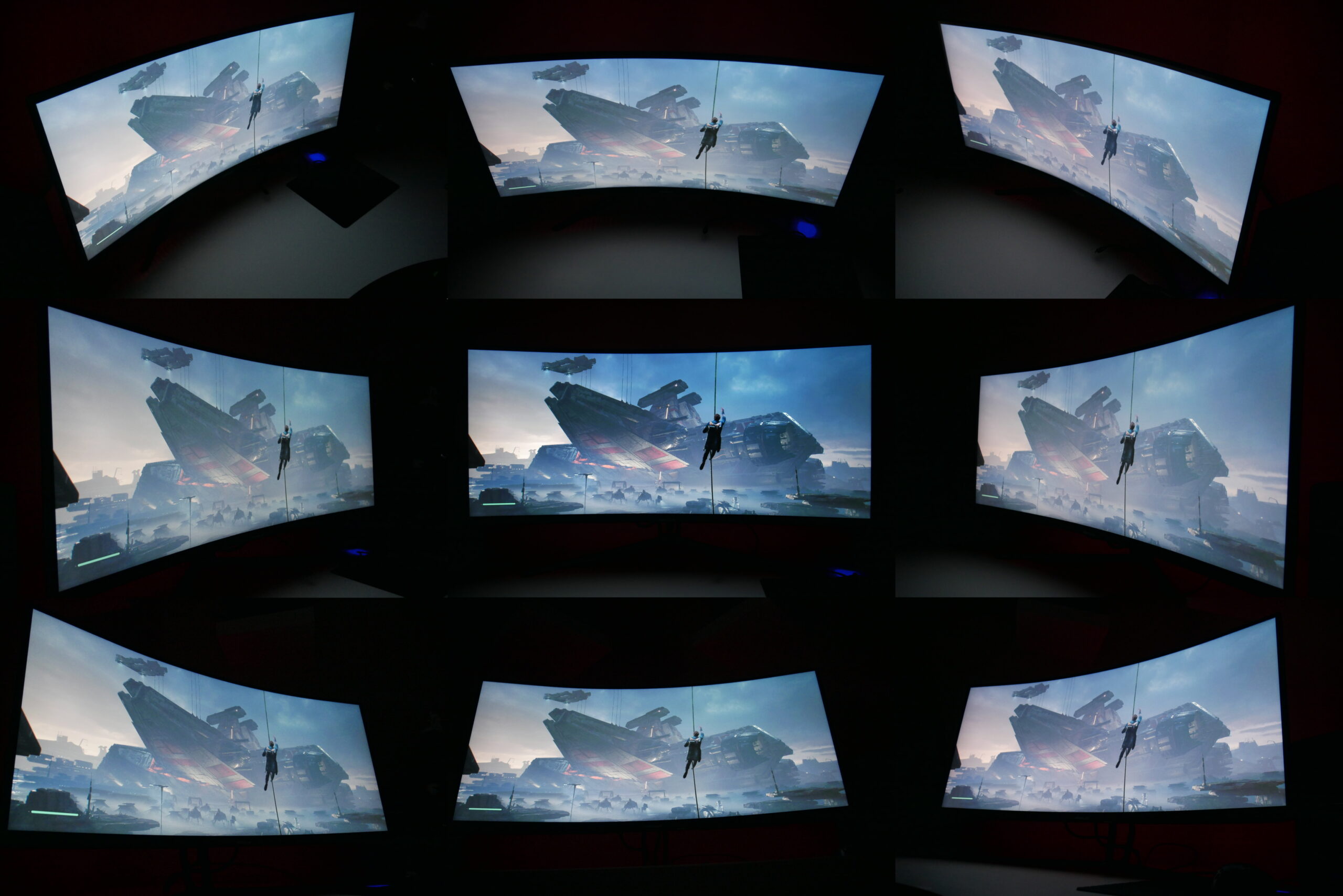 The only issue I came across with the display regarding inconsistencies or light bleed was found at a very symmetrical spot at the top of the panel, one on each side. There was a spot of light bleed that only showed up and became visible in the darkest of environments. I only noticed it the first time I was gaming early in the morning before the sun broke and I had not turned on my usual floor lamp in my office, but it's there at the top about 1/3 in on each side. 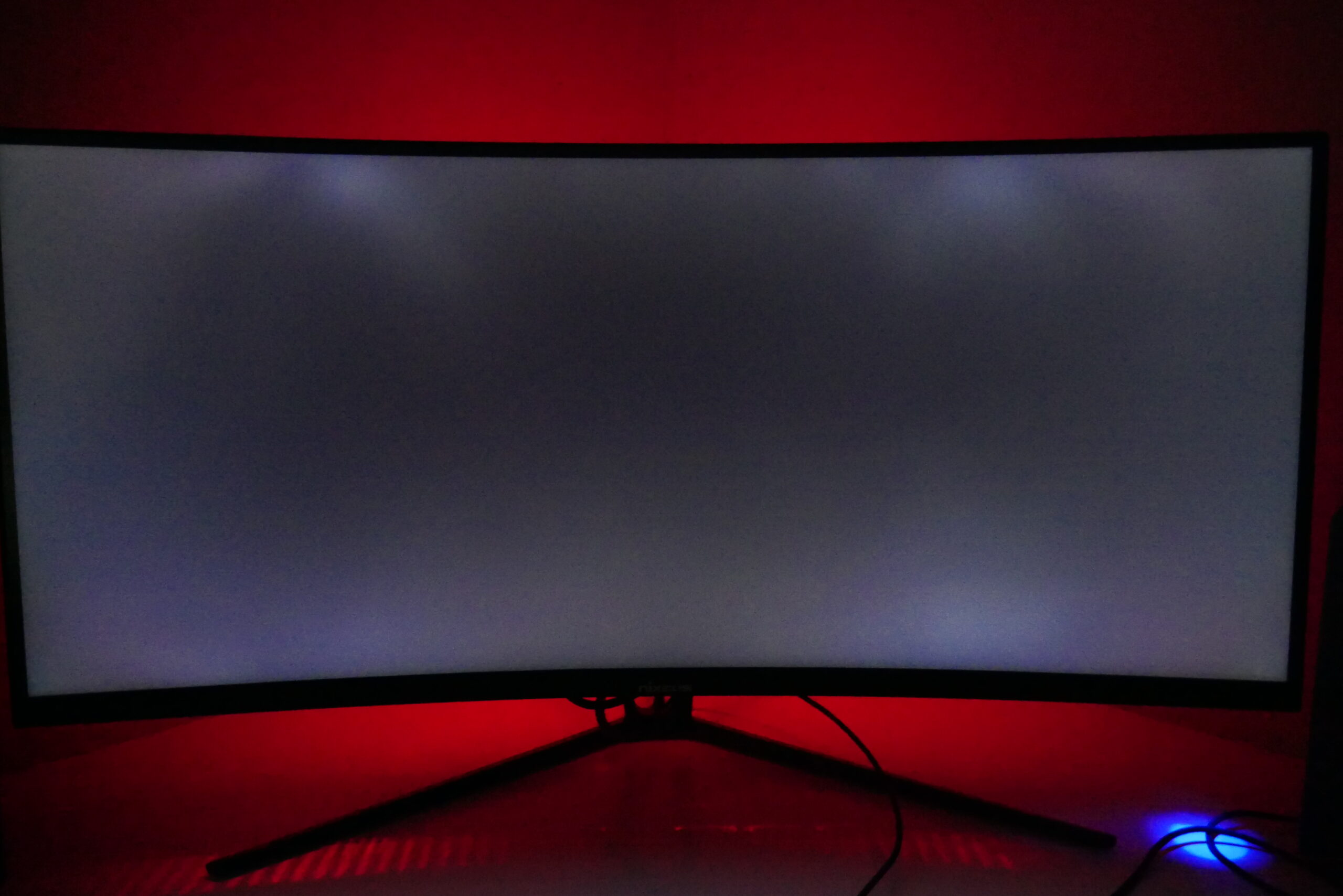 *NOTE* only the two spots 1/3 the in from each side are visible to the naked eye, the rest of the 'glow' was picked up from the camera and not visible in person.

The biggest concern I had going into this one was the use of a VA panel, while I understand and like the contrast ration and lack of 'glow' vs IPS I have found that the smearing that happens on darker scenes to be offputting. This does exist in menus for windows if you use the 'dark mode' where the background is pitch black, but out of that it's so very faint it quickly becomes unnoticeable. 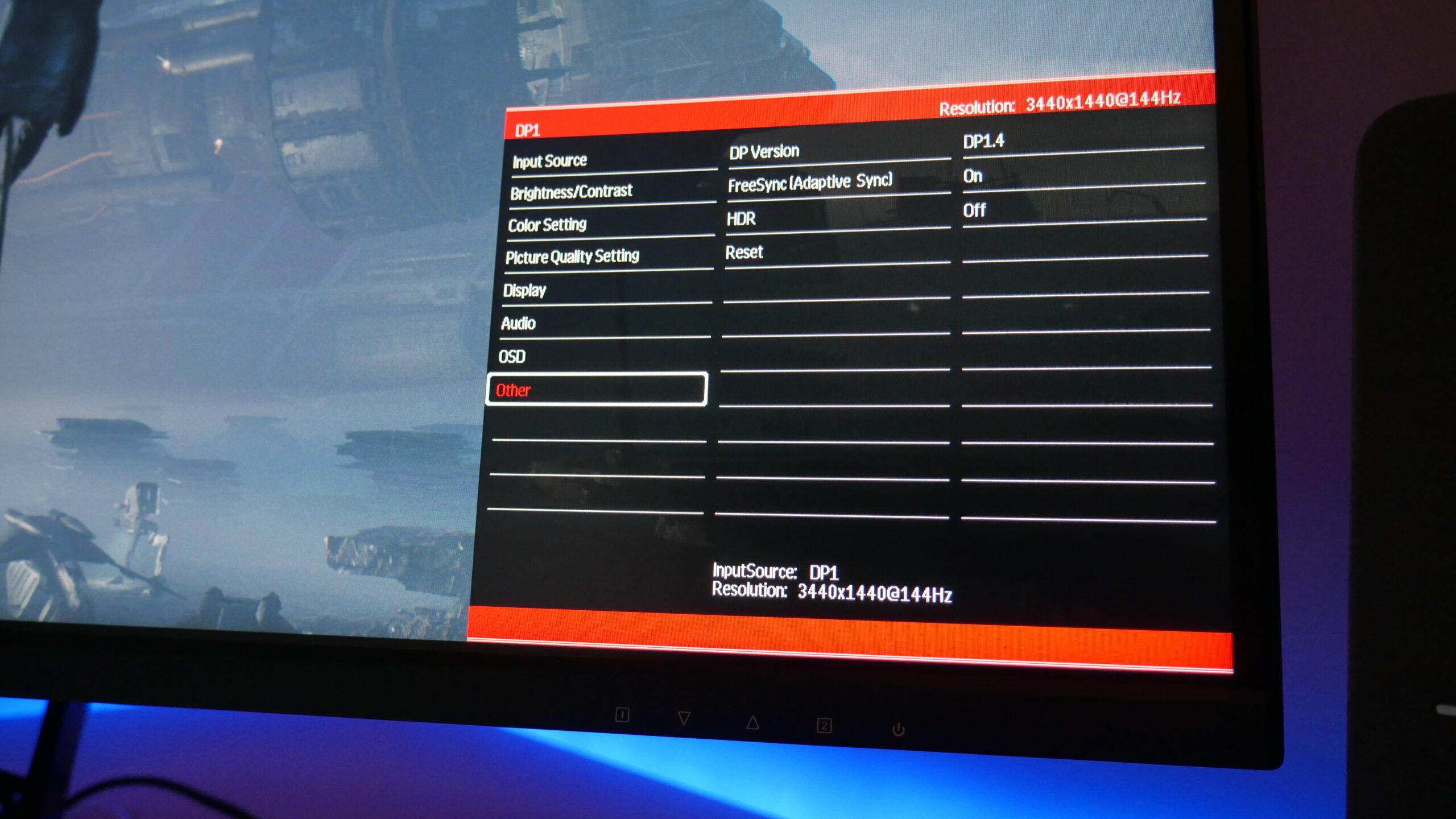 The on screen display is somewhere that Nixeus has caught the short end of the stick in the past. In fact, it has been the one part of the entire experience working with their panels that I have found to be the most frustrating. Thankfully this time around that is not the case. You'll need to navigate it to begin with in order enable FreeSync (Adaptive Sync) as that is not enabled by default. But once in the OSD, you'll find navigation to be very simple and have little to no trouble making and modifying the selections you wish. Glad to see they've taken the negative feedback in the past and turned it into a positive experience.

I gamed on this monitor for a couple of weeks now, including the entirety of Star Wars Jedi: Fallen Order, a good bit of The Witcher 3, and countless hours of Battlefield V and have come to a simple conclusion: Ultrawide gaming is excellent and the experience with the Nixeus EDG34 has been nothing short of wonderful. I played through these games using my personal Ryzen 9 3900X powered system paired with my GeForce RTX 2080 for about half of the time and swapped out for the Radeon RX 5700XT for the other half and found the panel to function the same for both, albeit faster of course with the RTX 2080. the 48-144Hz Variable Refresh Rate functioned without a hitch allowing for amazingly smooth gameplay so long as I was staying in that window. There was a strange flicker in some games in static loading screens, that happened with both vendors but was relegated to only loading screens so it wasn't a concern when gaming.

The one thing about the experience I would like to point out is that 3440x1440 is not for the faint of GPU horsepower. While nowhere near the brute that 4K is I think some people tend to forget the added strain that the extra width will bear down, but with some tweaking, I was able to get the RX 5700XT to stay in the VRR window and any compromise I had to make was completely worth it.

But what if a game doesn't support 21:9?! That's really not an issue, thanks to the deep blacks of the Samsung VA panel that Nixeus used you're greeted to insanely black sidebars that drift off into your peripheral view so long as the game is good and engaging. This leaves you with, wait for it, a tradition 16:9 2560x1440 aspect ration and a bit of a sour taste towards the developer for not filling the screen (looking at you Respawn and cutscenes for Fallen Order).

The other side of ultrawide is on the productivity side of things. I'm a person who, despite knowing I could get more done, HATES having multiple monitors on my workspace. Ultrawide is able to spread things out enough to where you can have multiple windows open with more than enough room to work. Excel on one side while watching a video on youtube without either being cramped? Yes please.

Okay, HDR and PC Gaming is far from perfect, but what if I told you that the EDG34 supports it but isn't trying to use that as a crutch for marketing? Well, it's there and it kinda works. I say that because it works about like some monitors that have HDR400 plastered all over it and when it's there but not a bullet point on the box I welcome it. Kind of like a small surprise for those who want to enable it. Checking it out in Forza Horizon 4 made a noticeable change, a bit more than just simply upping the brightness. Thanks to Nixeus not trying to add more bullet points they inadvertently made one. While I wouldn't say it's worth buying this panel for the HDR support, the support is a nice to have for those who pick it up and worth trying out in various games to see how you like it.

So is the Nixeus EDG34S worth the price of admission? Yes, and then some. The only real complaints I have regarding the panel are the bit of smearing with white text on black backgrounds and two spots of bleed at the top, but they're only visible in black screens, not dark scenes but full-on black screens. Ultrawide gaming has been something I've wanted to move to for quite some time but have been holding back because of the cost of 3440x1440 and 144hz combination. I have been on a 2560x1440 panel for a long while and have tried going to lower refresh rates without a wide range of VRR and just couldn't do it, the Nixeus EDG34 brings it all together with a high resolution ultrawide panel, large VRR window, and high refresh rate but at a price point that is accessible to most people. Is it a good value? Yes. Is it cheap? Not really as $600 is a good chunk of change, but for the experience delivered here, I will say undoubtedly that it is worth every penny paid.

Is it a good value? Yes. Is it cheap? Not really as $600 is a good chunk of change, but for the experience delivered here, I will say undoubtedly that it is worth every penny paid.