Sometimes I get sent a game out of the blue that I would normally never cover and I decide to cover it. Why wouldn't I normally? Well, I've naturally got to prioritise my time, I've got other games and items to review. Other reviews of items that are more in-tune with the audience of the site. Reviews of things that are more in-line with what I prefer, or at least look like they've got something of quality to come to.  Sometimes, though, I ignore all the rules and just jump, head first, into the slime of something new. This is the case with Nickelodeon Kart Racers and slime is such an apt word.

I used to love watching cartoons like Rugrats and Teenage Mutant Ninja Turtles. I can't say that I was a huge fan of Hey Arnold or Spongebob Squarepants though. This immediately puts the game at a disadvantage as half of the characters don't capture any element of my childhood. Specifically, the game features three characters from Spongebob Squarepants, three from Rugrats, two from Hey Arnold and four from Teenage Mutant Ninja Turtles. Now if only they could get the name of the turtles right. If that was the worst of the game's problems then this would be so much easier.

The problem for the game and me having to play the game is that there are far worse problems to contend with. In the case of Nickelodeon Kart Racers this is pretty much everything, sadly, I'm not exaggerating. Even the game launching on the Nintendo Switch and going against the veritable master of the kart racing, Super Mario Kart, shows some level of bad decision making. Logically, the game could have at least leveraged the licences it uses to entice fans, but it even gets that wrong. As said, the game only uses twelve characters from four of Nickelodeons cartoons.

These twelve characters can then be used to race around twenty-four tracks, most of which are as mundane as the next. They are based on different areas from the cartoons in question. The one thing that all of them have in common is that they have copious amounts of slime. Slime acts as the sort of power boost that you would find in other games. Collect enough and you can use it to speed yourself up, it's green NOS by all accounts. To be (extremely) fair to the game, the slime and tracks have some positive parts. Although it could be argued that the '24' tracks aren't really 24. Many of them share so many assets and are based on the same theme, be it the area around Spongebobs house or a generic school meant to be the one from Hey Arnold. Also, you have sewers.

So what are the positives? Well, some of the tracks are almost solely slime based, essentially this means you'll find yourself sailing the boat version of your vehicle and, every now and then, going over jumps that bring out the glider. The change in vehicle mid-race is a feature that doesn't occur in many games, it would be so much better if these changes had a large impact on the way you race or the movement of the vehicle sadly it doesn't. What has an impact are the few extra race types. In one mode, the game boots the racer in last every 15 seconds following the first lap. Another sees a sort of slalom course, Where you have to drive a specific direction around a post, with a maximum of 5 failures.

All of the tracks feature little extra items. Some of these are the pickups you would expect in any kart racing game. Other features include pads that speed you up, pickups that cause a pipe on the track to spit out slipe that you can pick up and also coins. These coins can then be used in the in-game store to purchase upgrades for the karts. The only problem is that none of the upgrades seem to matter. No matter the character or kart upgrades, they all feel the same.

As mentioned, the slime is one of the better features in the game. It actually takes the form of a slime meter, you drive over slime puddles or sail through the rivers of slime and this charges up the meter that can then be used to generate the aforementioned speed boost. One other feature are the pickups. These aren't unusual, you'll find them in almost every kart game. What makes Nickelodeon Kart Racers stand out, if only a little, is the fact that each character has their own unique usable pickup. It's seemingly the most effort that the developers, Bamtang Games, have put into making it feel like a Nickelodeon title.

Wait, no. There is something else. In a completely unusual twist of sensibility and effort, Nickelodeon Kart Racers features split-screen multiplayer. This is something, in my opinion, that every car racing game on consoles should feature. However, it doesn't have online multiplayer. Of course it doesn't. Though I have to admit I think this would have been a waste of resources having seen the quality of the game.

That's a damning indictment if there ever was one. It is an indictment, that much is true, but so is this: I genuinely can't see this as more than the bare minimum of effort. Despite the few things added to give a bit of variety to the racing, it genuinely feels, looks and sounds crap. The most egregious part is the racing itself. The carts just feel wrong, there's no oomph, no feeling of speed unless you use the slime boost. It's serviceable and you can get around the track, but it's listless and boring. Probably the only thing you'll ever find enjoyable are the winner's laps, where you have part of the track to yourself to let you collect some extra coins.

I can't even argue that it would have been fine if other parts of the game were better because that wouldn't be true. A kart racing game needs enjoyable kart racing. It's that simple. Of course the visuals and audio could have helped the game along. Alas, even there the game falls flat. Visually, Nickelodeon Kart Racers looks like a game more suited to be an F2P or £2.99 game for your phone or tablet. It's colourful and the maps and karts look decent enough thanks to that, but it's still simplistic. Even the effects from abilities are basic at best. There's never any real feeling of a special attack being used, the most detailed the game ever gets is when an ability cripples your kart and a bit of smoke will rise from it.

Just as basic, and all the worse for it, is the music and audio design. This is a major contribution to just how lifeless Nickelodeon Kart Racers feels. In a race, the music is an incredibly basic, uninspired loop of a few simple keys. It's slow, steady and altogether boring - for the most part, terribly balanced against the rest of the audio too. You can barely hear any sound from special use items, the karts just drone on, monotonous, and each character will have a quick one-liner to say when using or suffering from an item's effect. This one-liner is written, not voice acting. There is no voice acting - they didn't even need to hire somebody, just take a clip from the cartoons.

Only in the last lap does the audio pick up the tempo. It's still bad regardless. No increase in tempo is suddenly going to make it sound good. The developers honestly would have done a better job taking some Kevin MacLeod tracks because Spazzmatica Polka is infinitely better than anything I've heard in the game so far.

So, what am I saying? Simply put, if you were even considering playing Nickelodeon Kart Racers, don't. If you happen to be the parent or grandparent and you were thinking of "buying the young'un one of those vidja gaymes", my advice would be to go with something a little less painful. I hear swallowing razor blades is cheap this time of the year.

I exaggerate - nothing is cheap around Christmas. Genuinely, there is no way in hell that this game can justify the RRP of £29.99/$39.99. Granted, you will find it cheaper than this, but still overpriced. At the very most it's a cheap-quality cash-in on a license, timed perfectly for unwitting holiday season purchases by the uninformed. 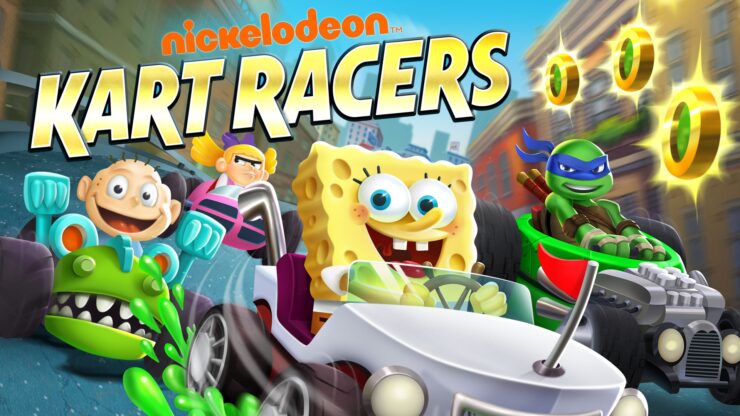 Nickelodeon Kart Racers is, simply, a very very bad game. With basic at best visuals, terrible audio design and quality, as well as just downright bland kart racing, this isn't the kart racer for you.