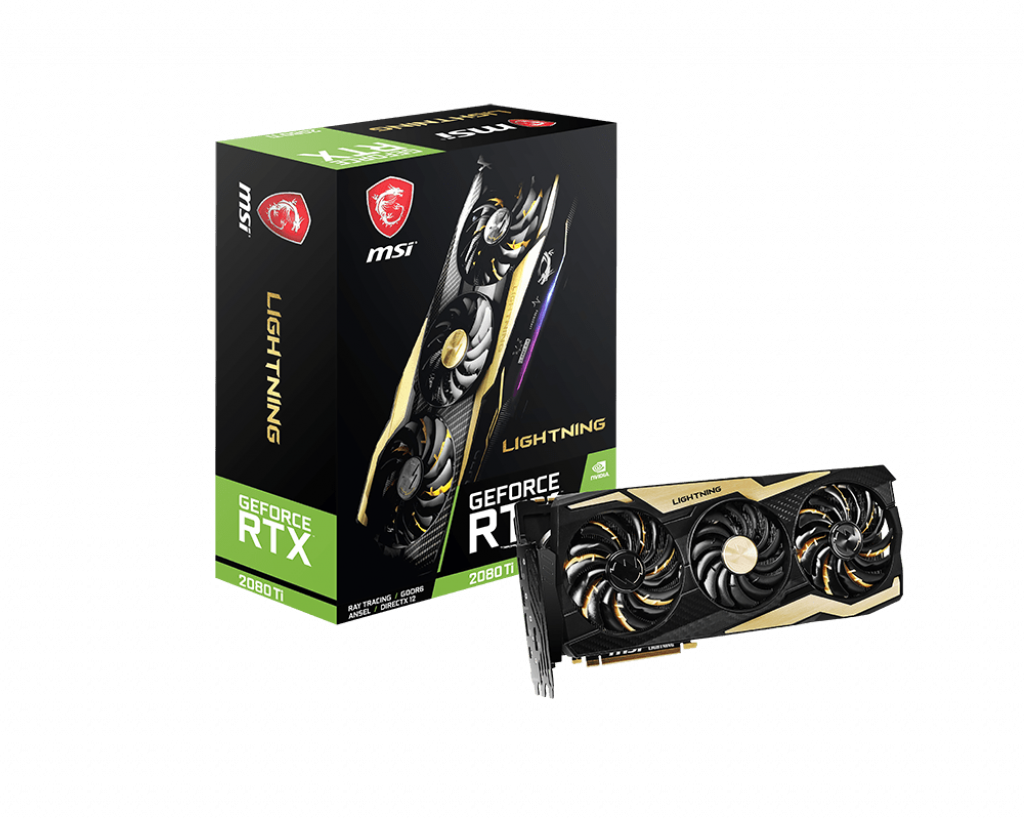 These four key points are achieved through the use of various technologies that you will found out in the Lightning Z. The cooler, the PCB, the power delivering and the design are all made to deliver the best possible performance and appearance for the flagship custom graphics card.

NVIDIA states that their new reference PCB allows for more power headroom of around 55W. That is where the 325W figure is coming from. The new electrical components also ensure much cleaner power delivery, allowing for better overclocks without wasting excess power. However, Lightning Z provides even higher headroom thanks to the custom PCB design and a monstrous triple eight-pin power connector configuration which will allow for better overclocking over Founders Edition card. 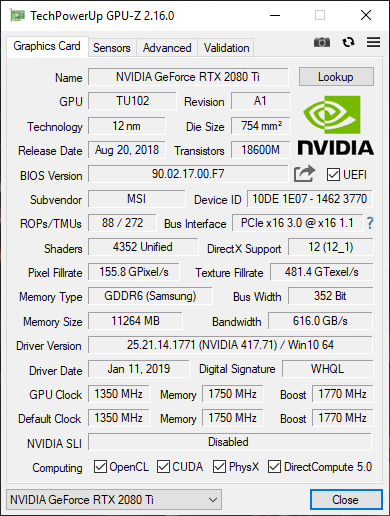 The PCB used on the card is a tailored 19 phase design which makes use of durable power components. In terms of clock speeds, the graphics card features the same base frequency of 1350 MHz but the boost clock is rated at up to 1770 MHz over the Founders boost of 1635 MHz (+135 MHz overclock).

Following are some of the features of the MSI GeForce RTX 2080 Ti Lightning Z before we go into detail:

One thing that is iconic about MSI's Lightning cards is the design. The new design looks brilliant and a return to form with a fully carbon fiber mesh design on the front and back. There are also two accent bars colored in gold that are reminiscent of a Lightning bolt and look really cool. The whole card has a touch of gold and black to it and also comes with MSI's Mystic RGB Lighting for the brilliant display of colors. 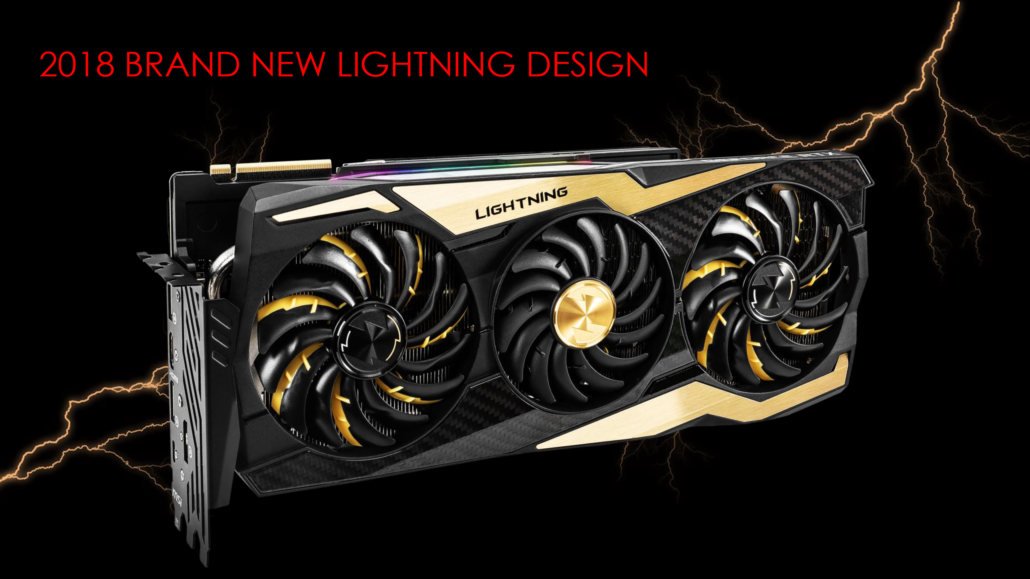 MSI has fully utilized their Mystic RGB Lighting technology on this card, taking the customization to a whole new level. It looks like the RGB innovation on much of the new cards isn't happening on the exterior of the shroud but rather on the interior of the fans. AORUS started this with their own Xtreme graphics cards and to be honest, that looked really great. As opposed to AOURS's design, MSI implements the RGB LEDs behind the blades on the fan frame rather than fitting them within the fan blades. It's really a unique approach and we can see that it works really well allowing for a various mode of operation.

Using an innovative and unique design, the RTX 2080 Ti LIGHTNING provides a whole new level of visual customization. With the MSI Dragon Center software, you can control the colors and also how many fan blades will be perceived. The fans not only dazzle you with vibrant colors and effects but also cool this beastly card in silence.

MSI has incorporated and refined a couple of things in the new Tri-Frozr design for Gaming X Trio graphics cards. First is the TORX fan 3.0 which uses both traditional and dispersion fan blades to accelerate airflow and push it down in a steady stream. These fans are made up of a double ball bearing design which ensures silent functionality in heavy loads.

The Dynamic Dashboard allows you to monitor your LIGHTNING’s hardware information in real-time. However since it’s a panel, it can of course display a lot of different things. So we’ve made sure you can upload your own image or animation as well.

The fans are fully compliant with the Zero Frozr Technology and are actually comprised of three areas. All of these would stay at 0 RPM (idle state) if the temperatures don’t exceed 60C. When it does exceed 60C, all fans would start spinning. You can change that through the MSI configuration panel if you want more cooling performance over noise load but it’s a nifty feature which I do like.

In addition to the cooling fans, the heatsink has been designed to be denser by using a rugged edge fins design. It allows more air to pass through the fins smoothly, without causing any turbulence that would result in unwanted noise. Airflow Control Technology guides the airflow directly onto the heat pipes, while simultaneously creating more surface area for the air to absorb more heat before leaving the heatsink.

On the back of the card, we see a solid backplate that is also made up of carbon fiber. This card makes use of 90% carbon fiber on its shroud which is very impressive and adds to the solid build quality of this flagship product. The back of the card also implements RGB Lightning but the most interesting part is a cleverly hid thick copper heat pipe that connects the back of the PCB along with several heat pads that further enhance the cooling performance.

There's a Pure Digital PWM control which enables accurate monitoring and control for the power delivery to each individual component. MSI has also incorporated Quadruple Over-Voltage through their MSI afterburner application which allows you to adjust voltages of Core, AUX, and VRAM individually. This obviously allows for better overclocking potential compared to other cards without the necessity of hardware-based mods.

The card makes use of a dual BIOS which can be triggered through a switch on the PCB. The default mode sets the power limit at 40% while the LN2 mode sets off the overcurrent protection, unlocking the full potential of the card. This is handy for LN2 overclockers who want to make use of all the power that the card has to offer without the need to solder, screw, tape or rework anything else at all. There are also Voltage Checkpoints on the back of the PCB which allow you to check voltages for GPU, Memory, PLL and 1V8 in real-time if you are a guy who doesn't trust the software-based readings.