As Monster Hunter continues to appeal to the hardcore action fan, minus some concessions for convenience and Quality of Life changes, it hasn't fully embraced the inexperienced audience when it comes to mainline titles. That's in part where the Stories subseries of Monster Hunter titles comes into play. Geared towards a younger audience, Monster Hunter Stories 2: Wings of Ruin focuses on turning the action RPG into something that fans of bug collecting and rock-paper-scissors can have fun with.

Monster Hunter Stories 2: Wings of Ruin is largely standalone with the previous game but the game constantly reminds players of how great of a hunter the player's grandfather Red, or Redan, was. The Wyverians of the series, known for living hundreds of years compared to their human counterparts, still remember Red's exploits and hope that the player can live up to them. Despite this, Wings of Ruin can very much be enjoyed as the first Monster Hunter title a player has ever touched. Of course, the many tropes of this long-running hunter gatherer simulator might be lost to those who haven't ever watched a friend or sibling do battle with an enraged Rathalos.

As the grandchild of Red, the player slowly steps into the boots of becoming a full-fledged hunter within the opening hours of Monster Hunter Stories 2: Wings of Ruin. While gifted a unique Rathalos egg early on, it isn't until the player builds up their experience as a hunter that they are able to hatch and train what would become the signature monster for Wings of Ruin: the Razewing Ratha with stubby jet-black chicken wings. Fighting alongside Ratha and AI companions that come and go throughout the story, the player will soon learn exactly what the elders mean by the Wings of Ruin.

So much of what makes up the core Monster Hunter formula has been brought forth into the Monster Hunter Stories series while being distilled down to the absolute basics. Weapons fall into one of three basic damage categories (piercing, slashing, or blunt), each offering two variants to work with in Wings of Ruin. Monster parts are still the core component to crafting new arms and armor, but rather than requiring specific gems or plates, monster parts offer up a point-based currency that feeds into crafting; a new armor set may require eight Rathalos parts and each spike or scale might offer one, three or ten points towards the requirement. Similarly, rather than crafting individual pieces of armor, the player crafts and dons an entire set at once, leaving customization to the cosmetic Layered Armor system as well as a free choice in the weapon and single accessory they get to equip as well.

Monster Hunter Stories 2: Wings of Ruin's shift from Monster Hunter's notable action combat down to a turn-based formula only helps to increase the appeal to casual fans that want a proper stepping stone into the series. Fights consist of yourself and a pet Monstie, typically fighting alongside an AI companion throughout the story or other player in the limited Multiplayer mode, up against one to three enemies at a given time. Combat plays out by only issuing a command to your hero character, while a type of energy meter can be spent to issue direct commands to your Monstie companion. The core of Monster Hunter Stories 2's combat is in the Rock-Paper-Scissors variant of attacks: Power beats Technical, Technical beats Speed, Speed beats Power. If you select the same type of attack as your Monstie, you'll typically attack simultaneously for more effective damage. Your own Monstie has its own preference on attack type and will use it constantly regardless of the enemy's actual affinities and weakness (you can see their preferred attack type alongside other key stats in the party menus). Oftentimes, the player will engage in a Head-to-Head attack against an enemy that's attacking them and the RPS attacks are much more effective in these instances.

While you can't see what type of attack an enemy will use in Monster Hunter Stories 2: Wings of Ruin, they're quite consistent in their attack patterns and having a spreadsheet on hand to track what attacks an enemy does at the beginning of a fight and when they're enraged feels like a near requirement in the latter chapters of Wings of Ruin as attacks start dealing dozens of points of damage when the player loses a Head-to-Head attack. If I've already fought a dozen Zamites and know exactly what they're going to do next, I would have liked to see the game track this internally or present it to the player in combat once you've become experienced with enough fights.

In many ways, these systems at play in Monster Hunter Stories 2 occasionally feel like they're only in place specifically because of the series it's based on. Money remains scarce because you're intended to sell off excess materials or engage in the same repeatable side quests. Crafting becomes a necessity to maintain a healthy stockpile of HP replenishing donuts but materials are scarce only because the game wants you to venture off into the same dungeons time and time again to pick up the materials that are thrown at you in large quantities. Monster Hunter Stories 2 could have shied away from the gathering aspect of the mainline series entirely and changed it to buying your standard Herbs and Potions from a store and nothing would have really changed about the experience, only swapping one menu for another. As a fan that has a penchant for hoarding every gathering material I can come across in World or Rise, I just didn't find the same joy from harvesting materials that I rarely put to use.

Monster Hunter Stories 2: Wings of Ruin, as with its predecessor, offers a unique system of Monstie raising that you don't get in the mainline MH titles. Occasionally when traveling throughout the fields or besting a beast in combat (chances are greatly improved by throwing a Paintball their way just before delivering the final blow), a mini-dungeon will appear with a monster nest tucked away in the back. By scavenging these nests, you'll often find a monster egg that you can bring back to your home village and raise up to be a fighting companion. Each monster has its own markings and designs so you can easily spot the difference between a Yian Kut-Ku and Nargacuga at a quick glance.

The Monstie raising aspect of Monster Hunter Stories 2 is simplified down to basics: hatch an egg, bring it along with you in your party to level it up, and over time, you'll unlock a 3x3 grid of genetics that determine that monster's passive and active skills. Linking together a line of similar colored or symbol genes imbues that monster with a passive bonus and genes can be freely transferred from one Monstie to the next, although you'll lose the sacrificial beast in the process. Unlike the first Monster Hunter Stories, you aren't limited to moving a gene from one like gene spot to another and can pick a free location if you wish to make a specific combo. Because of the gene transferring aspect, you can expect to spend a lot of time running these mini-dungeons to collect eggs for monsters you might not even care for just to get an extra critical boost or ability gene.

Performance-wise, Monster Hunter Stories 2: Wings of Ruin ruins quite well on a mid-spec PC. On a Ryzen 7 3800X and RTX 2070 Super, I was routinely getting 120+ FPS at QHD, both in windowed and full-screen mode. It would occasionally reach up to 144 as the limit I sent but the higher end frame rates would fluctuate quite constantly within the top 20-30 FPS that I never had it lock at 144 for any extended amount of time, especially in combat with flashy attacks flying about at 3x speed. Much of my review was spent via Steam Link playing upon a Macbook Pro halfway across my apartment with a DualSense controller and I had nary an issue that way. Minus some prevalent aliasing at a distance, the bright and colorful designs to Monster Hunter Stories 2: Wings of Ruin hold up quite well at any resolution on PC. 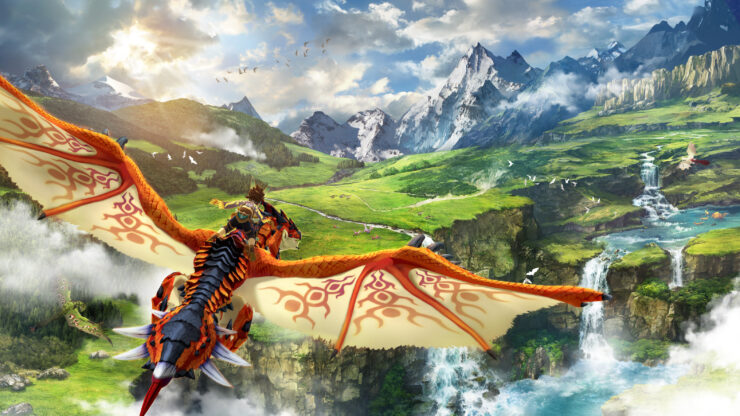