Ever since the surprise unveiling of Capcom’s new monstrous IP on the PlayStation 2, I’ve been a fan of the Monster Hunter series. In its original iteration, Monster Hunter was an RPG that disregarded conventional levels and instead relied solely upon the player’s skills and the gear they’ve crafted from various monster parts. In over a dozen years, the series has stayed true to that core concept while constantly adding in bigger and more badass monsters in each iteration. For most of those years, Monster Hunter’s main games have been limited to a handheld audience, given the climate of Japan’s gaming community (with notable exceptions including a port to WiiU among others). During last year’s E3, Capcom surprised and amazed fans with an HD title that brought Monster Hunter onto the most powerful consoles ever released, with a PC release to follow. Has Capcom stayed true to the formula with Monster Hunter World, or is this a completely new beast? 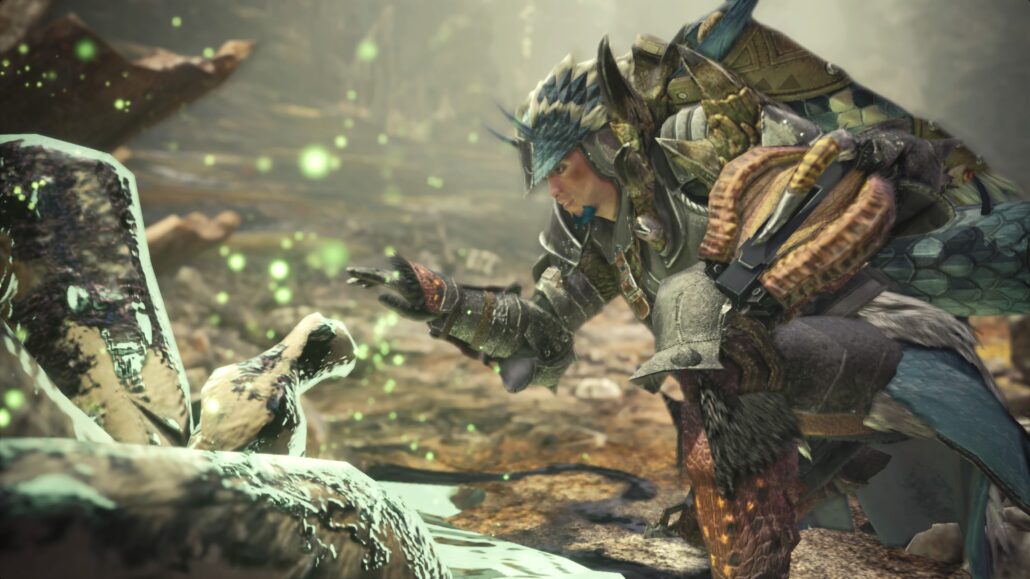 As a newly recruited hunter of the fifth fleet, the player is thrust into a world of towering beasts and behemoths, each more gargantuan and terrifying than the last. There’s an ever-changing ecosystem to the world that’s brought about by the sudden appearance of an elder dragon, the towering, building-sized wyverns that round out every Monster Hunter’s story. Monster Hunter World thankfully doesn’t feature any underwater biomes, but each region is filled with unique flora and fauna and mark the homes of different monsters that routinely need to be culled for the safety of the hunter/gatherer village the player calls home.

While Monster Hunter World places a greater emphasis on its story than previous iterations, the core progression still remains the same. Story missions are all separated into their own brief mission and typically involve either gathering certain materials or slaying/capturing a notable monster. This doesn’t stray far from previous games, but Capcom’s cutscene development has really outdone themselves with monster introductions and action scenes that are rendered in-engine with the player’s current gear and setup. Story missions are technically only playable once as they are Assigned to the player; once completed, these are relegated to Optional missions that still offer similar bounties. 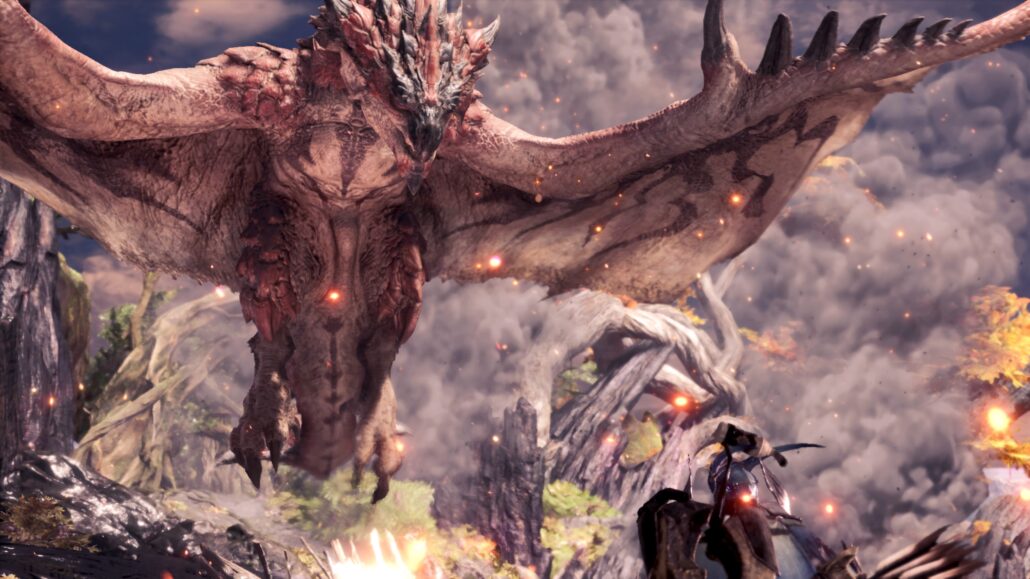 Monster Hunter World also features a bevy of randomly generated missions known as Investigations that ensure players always have hunts for their favorite prey. In Low Rank, these don’t offer much deviation aside from the number and variety of monsters to face, whether they need to be captured or slain, and certain numerical values such as time allowed or number of times the player can faint. Capcom has taken some inspiration from mobile games to get players engaged and coming back day after day, even offering daily login bonuses (which, for me, typically consisted of monster dung and a voucher to double one mission’s gold gains).

Consider the first thirty or forty hours of Monster Hunter World to be the training wheels. Newcomers will certainly get their money’s worth out of the low rank hunts all leading up to the repelling of Monster Hunter World’s gigantic elder dragon, Zorah Magdaros. However, don’t consider the journey to be anywhere close to complete once you claw your way out of Low Rank. Hitting High Rank (somewhere around Hunter Rank 12) opens up the world to all manners of monster invasions, arena fights, and gear customization.

Prior to hitting High Rank, my initial impressions were that Monster Hunter was streamlined far more than I would’ve anticipated. Blademaster/Gunner segregated armor sets are merged into a single set with most abilities favoring the blade, although Free Element has been merged together with Ammo Up as one example. Once in High Rank, the gear opens up more with every set offering two variants: one with a predetermined amount of skills and the other offering a couple of less skills but also gem slots to slot in your own skills. Armor set bonuses are also a new addition, functioning just like you would expect from most modern MMORPG’s (equip a number of pieces from the set to gain new latent abilities). 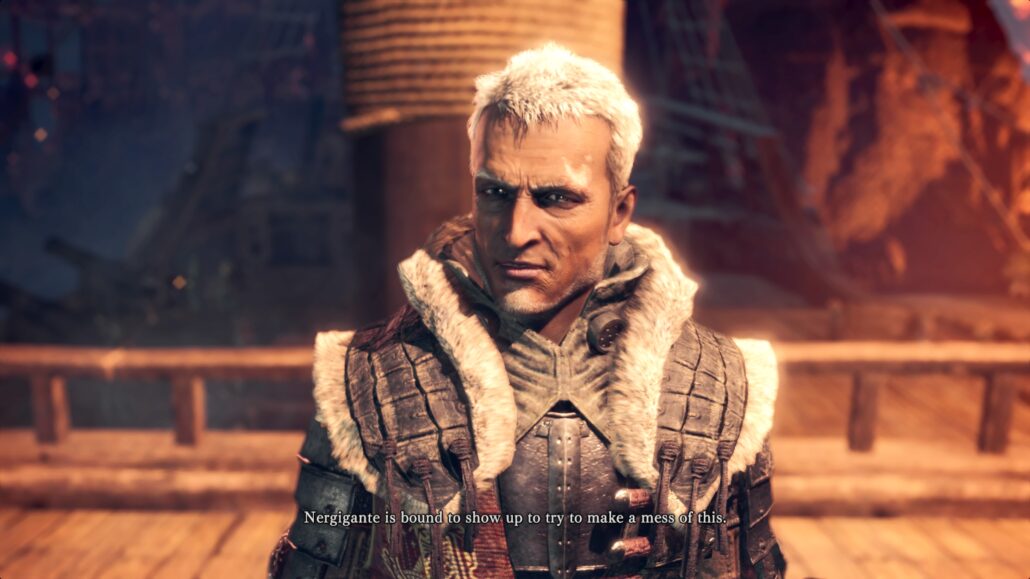 Monster Hunter World has been the first core MH title to get me out of my comfort zone and explore a brand new weapon. Previously, I was a hammer/hunting horn main, opting for that satisfying overhead smash to crack open a Quropeco’s beak, or upgrading to the Charge Blade in its first appearance in Monster Hunter 4. For monsters that needed something a bit sharper, the longsword was my weapon of choice. These weapons feel quite close to their previous iterations, but it was the new changes to the bow that caught my eye the most.

Finally being able to play on a console with proper analog sticks and having the comfort of aiming freely gave the bow some changes that make it far more enjoyable than the few missions I dabbled with it in Monster Hunter Generations. Featuring the mobility to strafe around a brute wyvern and target their soft weak points or unleash a shotgun-like quick shot at close range, the bow is a technical marvel that feels utterly satisfying in every fight. Nothing is more satisfying than bringing a monster to its knees with a volley of paralysis shots and then finishing the combo with a fully charged dragon piercer, the bow’s signature move that pierces through the monster, causing damage every step of the way. Against the Diablos, a staple of Monster Hunter games known for its hulking size and charging into the player with its dual horns, a well placed Dragon Piercer easily dealt close to two hundred damage, outclassing most other weapons in a single attack. If I was fast enough on the draw, I could nail two or three of these shots before Diablos would get up, only to have parts broken off or get stunned all over again. 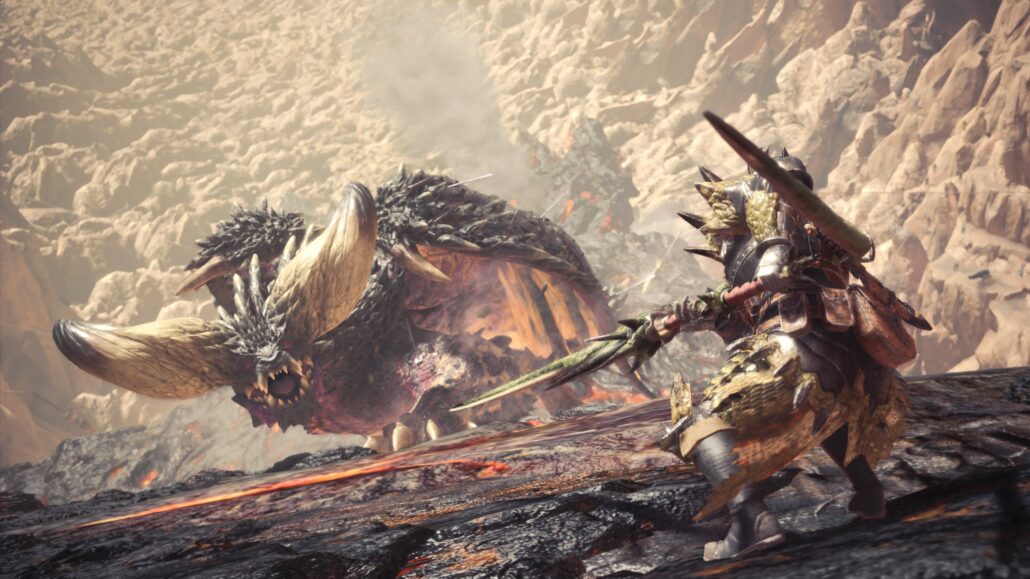 Gone are the fragmented zones that kept previous installment’s environments feeling like miniature arenas. Monster Hunter World feels just like its namesake, with loading screens and getting knocked into an adjacent area by a poorly timed monster charge being relics of the past. The change to having a much larger connected environment helps World feel way more alive and adds a great sense of scale to the adventure, such as when you’re tracking down a Great Jagras only to have a Bazelgeuse invade from the sky and mess up everyone’s day (which has happened on more than one occasion in High Rank).

The seamless environments are only one of the many changes that monster Hunter World has brought into the core formula to adjust it for a newer audience on more powerful hardware. Paintballs are gone, replaced by tracking down monsters by gathering footprints or fluid samples. There’s a persistent progression to these minor tasks, as the hunter will learn more about specific monsters and be able to track them outright in addition to track their weaknesses and material drops in the hunter’s guide. And if you played anything that didn’t require ammo, dulling your weapon’s edge and running out of whetstones was a common worry (especially if you’re like me and forget to restock the essentials before every hunt); never fear, whetstones are now infinite use and don’t even take up an inventory slot. They’re merely part of the standard hunter set, in addition to a basic BBQ spit, fishing pole, and capture net for the player’s Slinger. 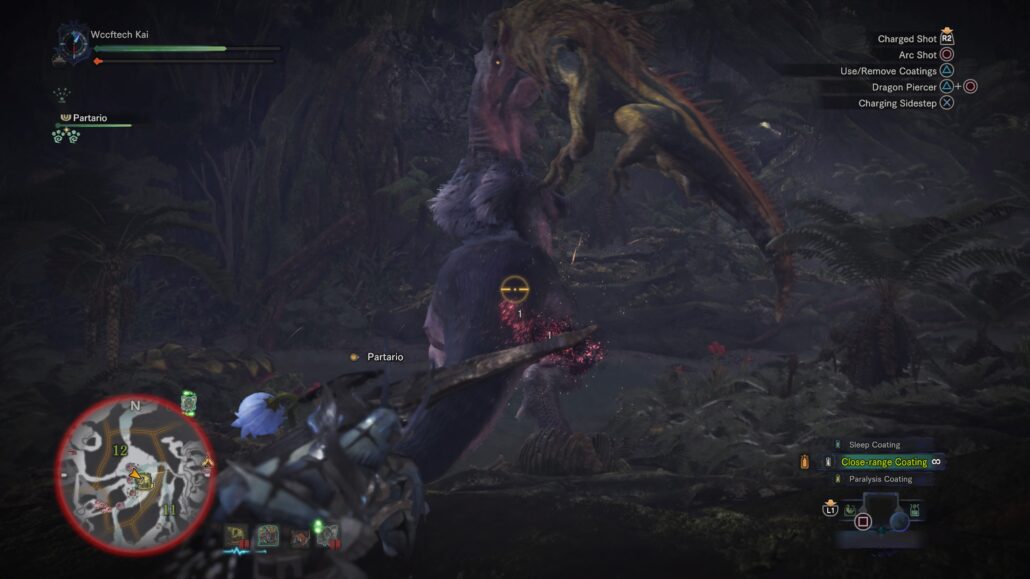 Monster Hunter World’s PlayStation 4 release is optimized for the PlayStation 4 Pro if you own one, offering options to prioritize framerate, graphics, or resolution. Despite playing it on a 4K television, I stuck with framerate for that smoother experience. In most instances, Monster Hunter World held stable but two items in particular would cause a noticeable slowdown (but still certainly playable): the Torch Pod and Health Booster. Particle effects in general seem to tax Capcom’s engine in particular, so it might be best to lay off the fireworks when you’re playing online, at least until Capcom patches in some stability enhancements.