The story to Monster Hunter Rise doesn't venture too far from previous Monster Hunter titles. The local village of hunter-gatherers is under the threat of the most dangerous game, giant dragons and monsters that are going to take a plucky hero or four to beat. There aren't any building-sized monsters to contend with this time around unlike Monster Hunter World's Zorah Magdaros, an Elder Dragon that I would be absolutely keen on taking on with the added mobility added to Monster Hunter Rise. Instead, be prepared to face off against a whole variety of series favorites and new faces that all want a piece of Kamura Village and that sweet dango within.

Monster Hunter Rise's early Edo aesthetic is absolutely endearing and gives this particular village a unique styling that helps it stand out from the previous entries. It's good that they gave Kamura Village such character because you're going to spend all of the time you aren't on hunts or gathering up mushrooms and thunderbugs. This is where all of the magic happens to empower your given hunter. Carved materials and hard cash can be used to create weapons and armor, the sole source of character improvements (which if you want to get down to semantics means Monster Hunter isn't actually a JRPG). You'll probably spend a great deal at the blacksmith to craft and upgrade your gear, not just for one single weapon that you really like, but for weapons of every element and armor with the perfect match of skills and elemental resistances to match up against your quarry (and don't get me started on getting the perfect talisman for your build, that's a whole other endgame mess to worry about).

Other village services include a canteen to fill up on fluffy mochi and dango to give your hunter some extra health and stamina along with temporary skills and let's be honest, you're going to want to stop by and listen to the dango seller's song before every hunt. Off in the Buddy Plaza, various merchants offer to help seek out new Palamute and Palico companions, train them up, and send them out on hunts for materials or to barter via the Argosy, a traveling ship players might recognize from Monster Hunter World (and one of the easiest sources for thunderbugs and dragonfell berries). These systems are all immensely streamlined from previous counterparts; in World, the Argosy would leave port for a few days and you'd be left to grab whatever the captain decided you deserved rather than Rise's new system of letting you send off a Palamute or Palico with a specific shopping list and the power of Lagniapples to motivate them.

Monster Hunter and portable consoles are a match made in heaven. While Monster Hunter World has been a major revitalization for the series in the West, there's been a vocal fanbase that longed for the four-player local multiplayer that's been a huge part of the series during its life on PlayStation PSP and Nintendo 3DS. Monster Hunter Generations Ultimate on the Nintendo Switch did an incredible job of bringing a beloved hunting experience onto a new platform, but for fans that wanted the new features from World, they were left in the dust for years. With the new release of Monster Hunter Rise, hunters can finally get into an experience that's been modernized in multiple ways to change the focus from hunting and gathering to lean more heavily on the hunting part.

Gone are the days of having to paintball a monster and track it down across multiple loading screens. In its place is a region map that fills in as the player explores each area. Undiscovered monsters appear as ominous question marks, but once you've fought them even just once, they'll always remain a part of the map knowledge. By learning the routines of each monster, you'll know what zones they like to hang out in at the start of a hunt, where they go for a bite to eat or for a quick nap, and even a brightly blinking icon when they're near death and ready to be trapped. To some, streamlining the pre-hunt experience takes away from the deliberate preparation between each life-or-death bout. Having the canteen chef cook your raw meat for you instead of having to bust out a BBQ spit midhunt, only having to strike once to mine an ore lode, sending the Argosy out for all of the materials you need for a Pitfall Trap; these are things that were simply part of my hunting experience for as long as I can remember and I'm entirely grateful to Capcom for finally stripping away much of the busywork so that I could focus on doing what I do best: running away from a flying Rathalos.

In a lot of ways, Monster Hunter Rise is about as accessible as the series might ever be but there's one major addition that could keep it from claiming the top spot. Verticality is a huge part of Monster Hunter Rise and brings a dynamic to the combat that wasn't part of the series save for those brief fits of airtime while wielding an insect glaive. Players can scramble up walls or even hop a ride on their friendly Palamute to dash around with great ease. New to Monster Hunter Rise is the addition of Wirebugs, a symbiotic creature that greatly aids in the player's mobility by allowing them to launch themselves forward, upwards, or in any direction you wish. For those that have the foresight to anticipate a Barroth charge, instead of having to put your shield up and block like a champ, the ability to launch yourself up and over the monster with a wirebug fling adds a whole new level of style to your hunts.

If you aren't feeling very nimble on your feet, the wirebugs can also imbue unique abilities to each weapon and get used as recharging energy for these skills. I don't think I could ever go back to playing Heavy Bowgun in any other Monster Hunter game without Counter Shot. Being able to stand firmly and flat out absorb any single attack is an absolute gamechanger, even without the free 300 damage shot afterward. Every weapon has similarly unique skills, some available from the first time you pick up a weapon, others earned through hub quests, so there's plenty of customization if you want to dedicate yourself to a single weapon type but still have a versatile playstyle. I was first disappointed that Rise, much like World, didn't offer any new weapon types to play with but the addition of the Wirebugs helped to keep me from falling into my old habits and using the same Bow and Charge Blade playstyles I've trained myself in for the better part of a decade.

The monster roster hits the marks of the monsters hunters have come to fear over the series' past seventeen years with some notable surprises. Khezu returns, alongside Lagombi and Arzuros and others that have skipped recent entries. Even the old monkey king Rajang himself makes a guest appearance in High Rank if you know where to look. Monster Hunter Rise's new monster roster isn't too out of the ordinary for the series and if you had told me that the Almudron had been around since guest appearing in Tri alongside Lagiacrus, I'd probably believe you (Almudron's one of nearly a dozen new monsters to appear in Rise for the first time). Most of the new monsters to Rise draw inspiration from Japanese mythology in some form, making them a perfect fit for raiding Kamuro Village.

Monster Hunter's traditionally been about two main quest types: hunting and gathering. Hunting doesn't always mean big game; sometimes you'll have to slay and carve up a dozen smaller beasts as well. Gathering is just as it sounds, gathering ore or organic materials to bring back to the village, or if you really want to hate your time playing Monster Hunter, transporting wyvern eggs back to the base camp. New to Monster Hunter Rise are Rampage Quests, a strange sort of tower defense quest that pits hunters up against dozens of monsters that aim to break down any gates in their way and attack Kamura Village. In these quests, your weapons aren't typically the most effective tool you've got. Hunters can lay down all manner of traps, from ballistae and barrel bombs to NPC-manned gatling guns and even summoning down the odd champion hunter for a limited time.

My main complaint is in how long these missions take: late-game rampages often take the better part of thirty minutes to complete and that's even with expedited building and repairs. During this time, monsters will constantly stream in and rush past your manned defenses towards their primary objective, the giant gate protecting your village residents from harm. Thankfully faints and hunter losses aren't on a limited counter, so as long as you pick yourself back up and rush back onto the battlefield, you don't have to worry about the typical three strikes rule that standard hunts abide by. There are only a very small number of Rampage quests available in Monster Hunter Rise but I audibly groan any time that my hunting party wants to undertake one instead of, well, any other hunt. 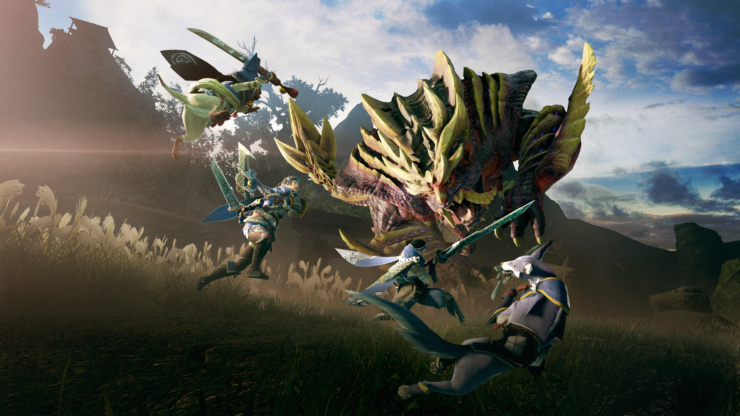 Once players get past the poor onboarding experience, Monster Hunter Rise might offer the series' best entry for first time players while series veterans will fly over the competition with the new Wirebug mechanics.