Wizards of the Coast

I first played Magic the Gathering over a decade ago, when a family holiday was completely rained out. Instead of enjoying the great outdoors, I spent those days playing Magic with my dad, neither of us having anything that could be confused with strategy. We tried to summon the most powerful creatures we could, before throwing them at each other's defences with reckless abandon.

Now I’m staying up late into the late, spending untold hours precisely determining the optimum number of land cards for my Green/White deck and while enhancement I should sacrifice and add to make up the numbers. MtG's legacy of tactical deckbuilding and tense matches firmly has its hooks in me, thanks to Magic the Gathering Arena.

For those that don’t know, the basic principle of MtG has playing building mana-pools from land cards, which they use to summon creatures and spell cards that in turn at used to reduce the other player's health to zero. It might sound a little complicated, and if you look at a random card out of context you’ll have no idea what is going on, but it's incredibly easy to pick up. Arena, the digital version of Magic the Gathering, has a simple onboarding process that runs through the basics in five matches before letting you play online. If you’re still a little unsure, especially while you have to grasp the strategies of different coloured decks, you can still play against a bot to experiment.

But while Magic the Gathering Arena does a good job of explaining each of the terms as they become important, some major lessons are still left for the player to work out on their own. Like I said earlier there are a number of different coloured decks, represented by the different land cards they utilise. Each of these has a unique style it, from the trickster blue decks to the hyper-aggressive red ones. But it's sort of up to you to work that out through trying out the different colours, and combating them. There’s also a library worth of discussions on this online if players truly want to delve in, but it might have been nicer to have a one or two line instruction on what to expect. This variety and the sheer number of cards available also mean you can build a deck that encompasses any kind of playstyle. You can have a small band of creatures supported by buffs and enhancements. You can have an entire army that swells over your enemy's defences. You can have an entire deck that does nothing but limit and irritate your opponent or one that heals you every single turn. And once you get comfortable after spending enough time with Magic the Gathering Arena, you can start blending these strategies together.

But whether or not you know exactly what your strategy is, Magic the Gathering Arena is just exciting to play. Even from the beginning, there is a certain rush that comes with executing a complex multi-turn manoeuvre. Or when your turn starts and your desperate for one more land card to summon your biggest, nastiest monster to the field. There’s even a thrill when you realise you’ve wandered into a trap, as cards start dancing rapidly and ominously across the screen.

And the design of Magic the Gathering Arena works well, as scrolling over cards will give you a zoomed-in image and legend breaking down all the concepts you need to know to understand the card. Likewise, cards being used and even what your opponent is looking at is highlighted so you can easily keep track of the action.

Annoyingly, the deckbuilding part is much harder to follow. Obviously deckbuilding is always going to be a bit complicated. You’ve got hundreds of cards to choose from, and it can be impossible to keep track of them physically. Magic the Gathering Arena does what it can to make these moments easier, with a search bar and advanced cataloguing. But this, at least for me, doesn’t do enough. For one, as someone who until recently was not heavily invested in magic, I don’t remember the names of cards, so finding one through the search doesn’t help. Moreover, I like to categorise the cards by colour and effect, and the game doesn’t have any options there. For instance, I wanted to build a flying deck but it's hard to manually scroll through each card to find the ones with flying.

But for people that organise their decks in the way that Magic the Gathering Arena assumed they would, the many features that the deckbuilding hub has, including keeping track of the mana price of each card so you can easily make sure your deck isn’t top or bottom heavy, should be enough.

For people that want to try Magic but have always been put off by the complexity and price, this is a fantastic (and free) place to start. For experienced players, Magic the Gathering Arena offers another avenue to experiment and dominate, with regular events and tournaments you can compete in, often for a small in-game currency fee. Arena even lets you regularly win booster packs for free so players that don’t have the urge to sink in real world money can still build their own unique decks.

Even with some of its faults, Magic the Gathering Arena is a great hub for playing a fantastically polished card game, with a lot of depth for the experienced and help for the new. 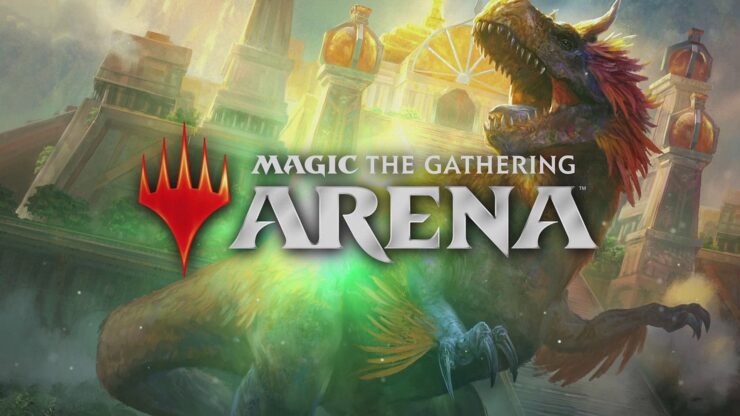 Magic the Gathering is the grandfather of a lot of deckbuilding games, but its introduction to the digital marketplace feels fresh, exciting and well worth the (free) price tag.

Hearthstone: The Boomsday Project – Our Most Anticipated Cards