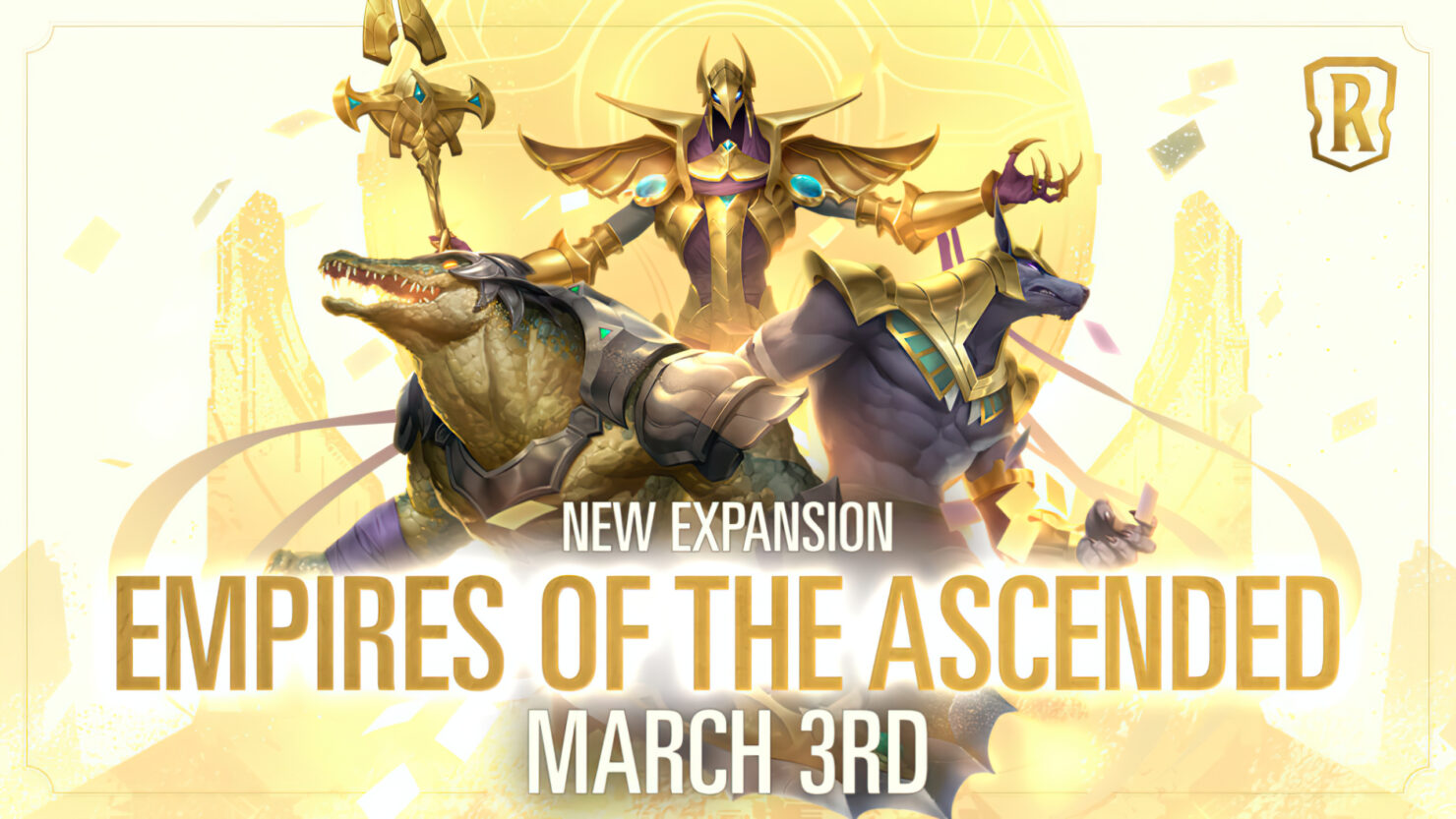 League of Legends' unique spin on the collectible card game is back once again with its biggest expansion to date, Empires of the Ascended. Coming to the field are a slew of new features, heroes, factions, and gameplay modes that are sure to delight newcomers and longtime fans alike. We recently had the opportunity to check out the latest expansion to Legends of Runeterra, Empires of the Ascended, in a brief hands-on preview ahead of the expansion's full rollout this month. 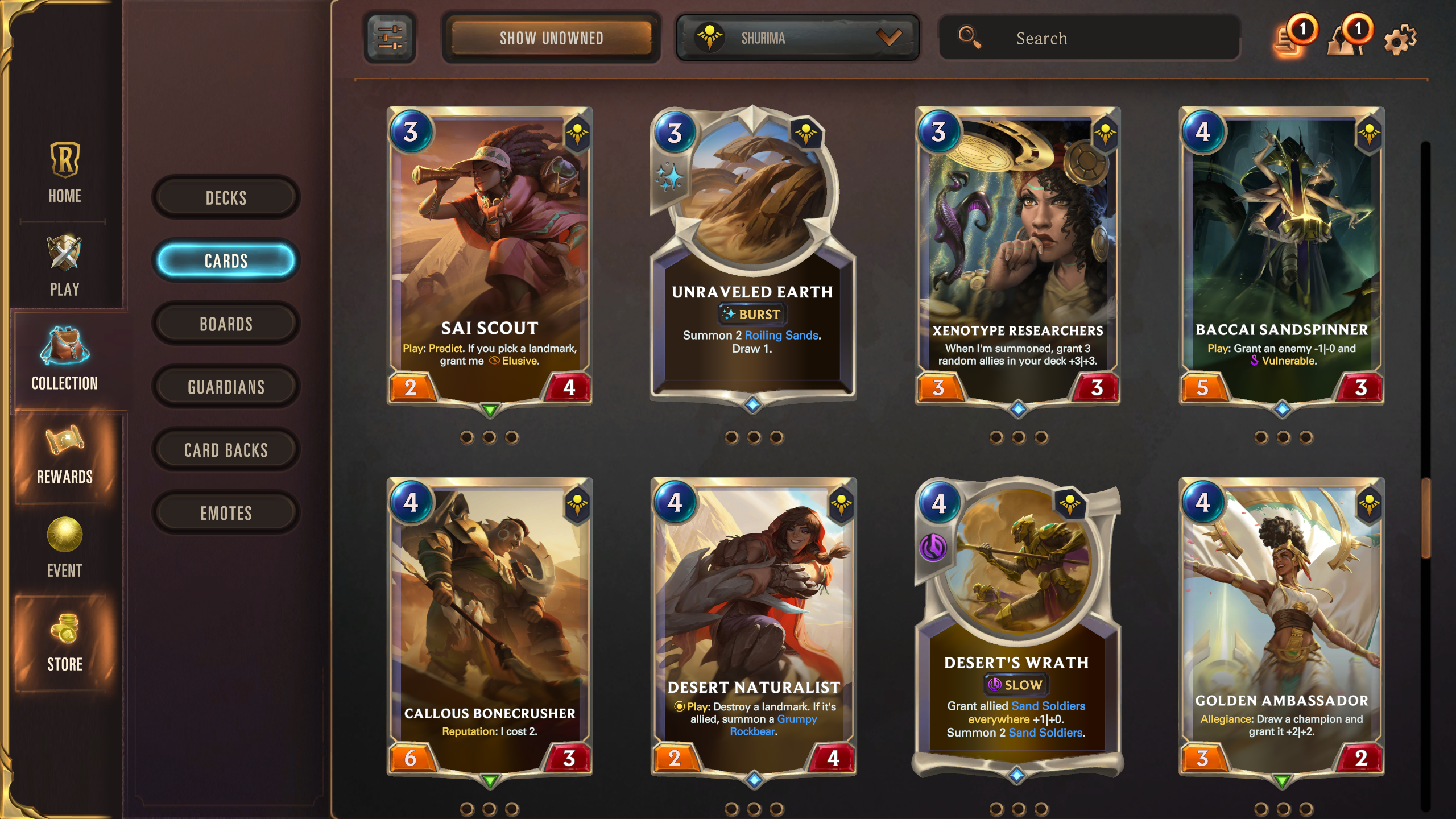 Shurima is home to some of League's deadliest champions, such as Nasus and Renekton, and now hosts the latest addition to the Legends of Runeterra battlegrounds. The sun-soaked landscape brings with it over 110 new cards to the battlefield along with new mechanics and the usual accompaniment of events and League's take on the battle pass. Judging by the looks of the new content drop, this looks to be one of Legends of Runeterra's meatier expansions to date.

Perhaps the strongest new addition to Legends of Runeterra is the emphasis on new mechanics that take full advantage of the Shuriman additions and a heavier desire to focus on one, perhaps two factions in your deck. For the primary deck that I played for the preview, I played an all-Shurima deck that included a Buried Sun Disc in the deck. At the start of the game, this card is automatically added to my hand provided that all cards in my deck are Shuriman. With the new Countdown mechanic, the Buried Sun Disc starts with a count of 25 and goes down by one every turn. This also has a mechanic to advance by an additional ten rounds every time that an Ascended ally levels up. Once that counter fills up, the Sun Disc is Restored to its more powerful form and the player immediately draws one of each of the Ascendants in their deck and for the remainder of the game, all level 2 Ascendants are instantly converted to level 3.

Countdown is only one of the three new keywords coming to Empires of the Ascended. New to the Legends of Runeterra card mechanics are the addition of Reputation and Predict as well. Reputation is a new mid-to-late game mechanic that builds when players continuously strike for 5+ damage throughout the game. Achieving this amount of damage four times in a game unlocks this permanent ability for your deck. For many cards, this reduces their casting cost by three while others, like the Black Rose Spy, instantly transform into a copy of the Strongest ally that attacked that round (not too shabby for a two-cost card). Predict is another mechanic that I was surprised wasn't already a part of Legends of Runeterra. This keyword allows you to take a look at the top three cards of your deck then pick one, shuffle your deck, then place that card on top of your deck for the next draw phase. Khahiri is a champion that gets bonuses from Predict, so this could be a good attempt to scry your deck and gain a little bit extra power while you're at it. 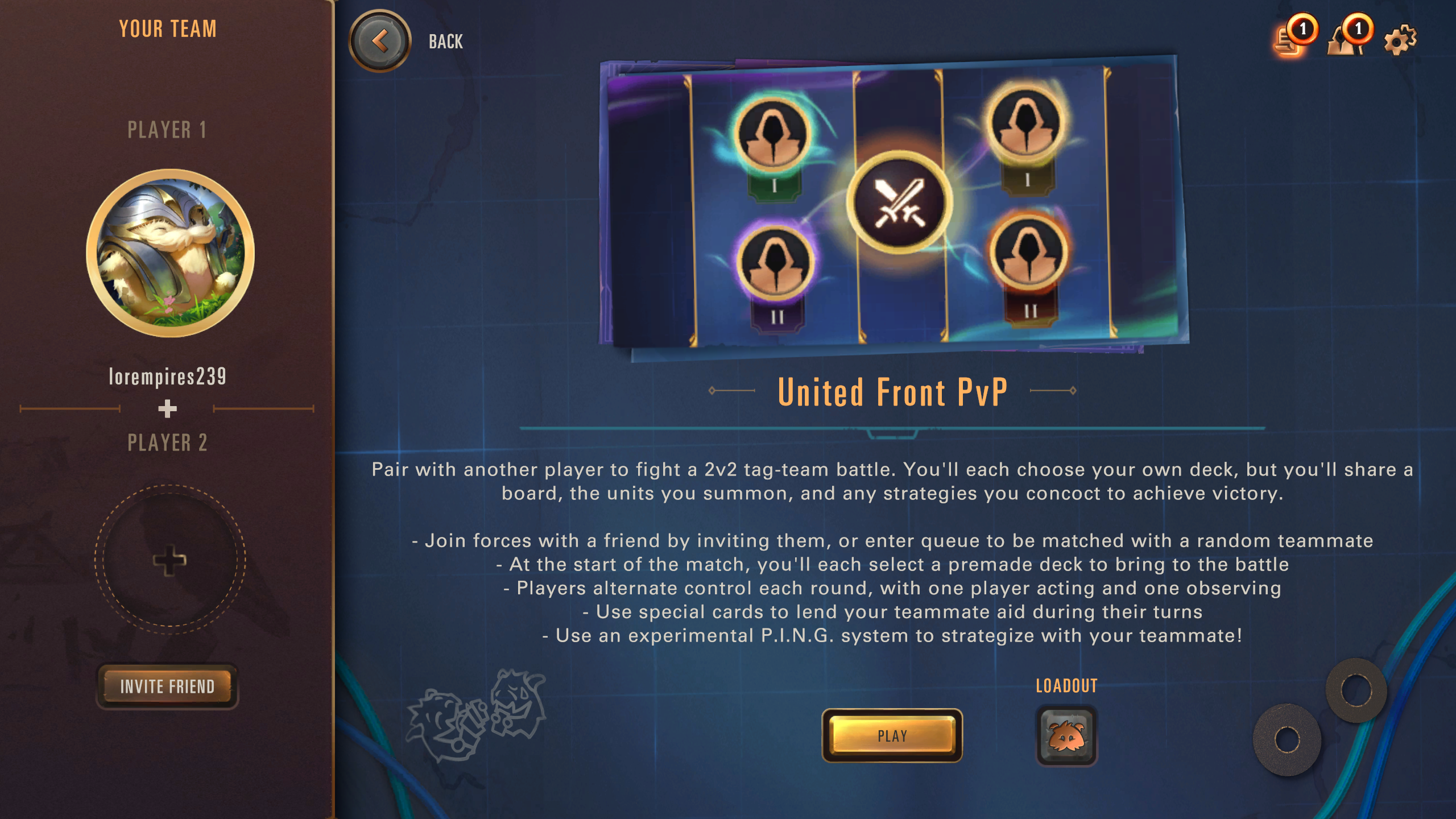 Players won't have to settle for 1-on-1 fights when venturing into Shurima. As part of the new expansion, Riot Games is implementing a new 2v2 mode called United Front in the Labs. Players might have seen this pop up back in January in the Social Labs but Empires of the Ascended marks the official rollout of the new gameplay mode (which is still in somewhat of an experimental phase). Players alternate between attacking and defending on their selected team, and while they each bring their own deck to the battlefield, new cards can be drawn during play to allow passing cards to their partner to help strategize and combo off of each others' playstyles. While voice chat isn't implemented in United Front, players can ping specific cards and drop an emote to help signal to their partner on potential strategies.

Interested players don't have to wait to get their hands on Legends of Runeterra's Empires of the Ascended expansion. The new expansion launches today and you can download the latest Legend of Runeterra client here.