As cringingly edgy as this might sound, darkness has never looked so good. Light Fall is an atmospheric, and maddeningly challenging platform set in a dark and magical continent. Playing as a small sprite-like creature you have to explore the hauntingly beautiful, dangerous and empty expanse. Narrated by a strange owl that seems more bored by your presence than interested, it's your job to find out what happened to the people of this land.

Along the way, you’ll learn about the history of the continent known as Numbra, as well as the religion that permeates the darkness. When adventurers first discovered this place, they found the sun was missing. And this permanent darkness makes this 2D game very interesting to look at. Most of the background is made of shades of grey, black, purple and blue and they are nicely fit together it almost feels like you’re running through a work of art. Not a particularly happy work of art but a work of art nonetheless. Mixed in is the occasion flicks of golden hues and pastel colors that hint at the life that survives in the darkness. It's so nice to find a game that marries its color palette so well across a variety of locations.

The only issue is that you spend so much time sprinting through the world you might forget to enjoy it. Light Fall is more Super Meat Boy than Mario. Its about lightning fast reflexes and precision movement, and the difficulty only goes up. Filled with the all too standard platforming hazards such as collapsing platforms, enemies that move vertically and being chased across the screen, Light Fall doesn’t offer anything you won’t have seen before in the genre. Given its great artistic design, it would have been nice to see some of the originality brought to the level design as well, but it continues to be fun throughout the length of the story. 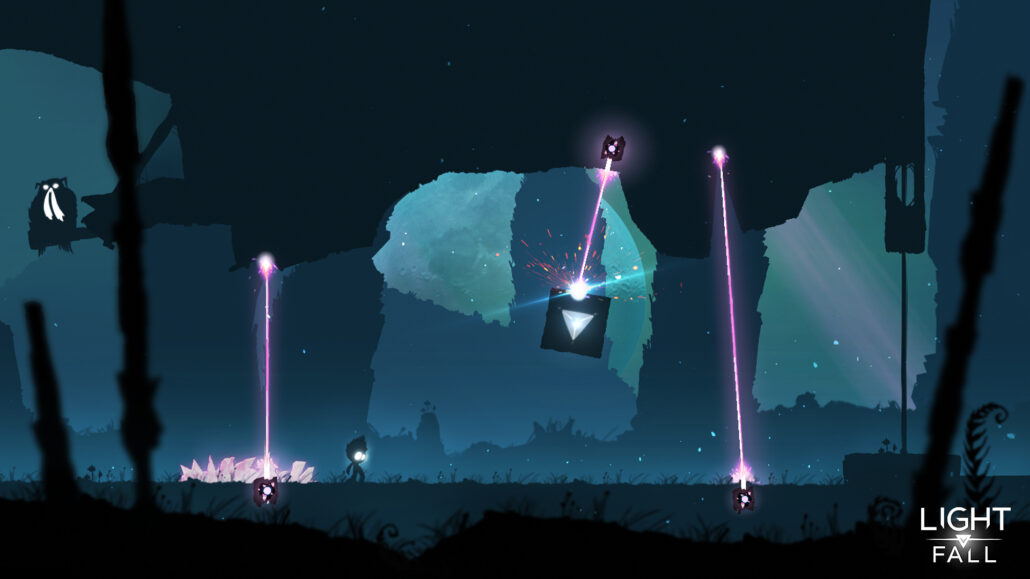 The controls and interaction feel pitch perfect for the levels as well. Sprinting always feels a little too fast for comfort and also satisfying when you pull off a tricky, high-speed section. Jumping is really nicely tuned and can launch to horizontally or vertically depending on your momentum. And this is where Light Fall shows off its ingenuity. While the challenges you come across in the dark world of Numbra might not be new, the way you overcome them is. In Light Fall, you have can create your own platform. Instead of the standard double jumping, pressing jump in the air creates a platform under your feet. You can only do it a handful of times before you need to touch the real ground again, and only one box can exist at a time, but it completely changes the way you move through the levels.

The level design starts to spread itself out and forces the player to move across in the shortest moment of steps. This means you’ll also have to be moving quickly and reacting fast to the obstacles that come before you. You can even place the box to block certain traps but this pauses the game in a way that feels strange when you’re flying across the screen the rest of the time.

Light Fall offers something that different in this, something that is as thrilling as it is every time you have to do. While most platforming games show you the route you’re about to overcome, Light Fall asks you to perform a leap of faith. So many times I stood on the very edge of the world and knew I had to jump. I couldn’t see where I was going to land, or what I was going to encounter, but I knew I had to do it. These moments are the best part of Light Fall, and really nicely recreate the same thrill each time they’re employed. 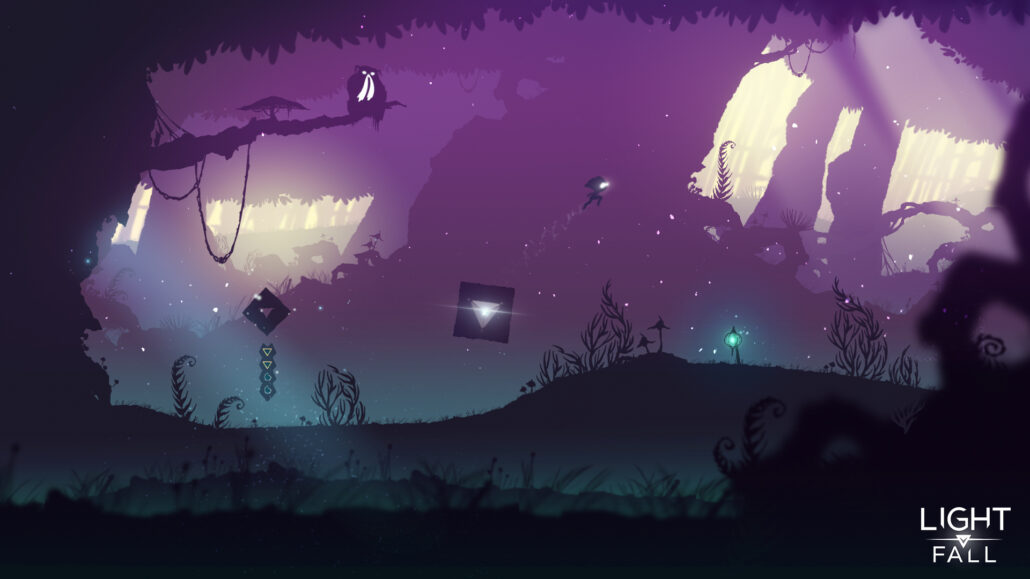 Naturally, these leaps into the unknown often end in the death, and because of this Light Fall doesn’t punish a player too much. Death only takes you back to the last checkpoint and for the most part, they are placed reasonably apart and nearly always before challenging sections. Some moments, naturally the ones I found the most difficult are also the ones where the checkpoints weren’t as well placed and I found myself bouncing off the challenge at those moments.

Light Fall is beautiful, challenging game that might not deliver anything new in the level design, but adds an interesting layer to the gameplay. Adding a self-created platform on the surface sounds shallow and cheap, but its surprising genius. An effort has been made across the board in Light Fall, from the whimsically dark story to the game design and artwork. Light Fall is an impressive, sadly underrecognized title that adds something new to a genre as old as games themselves.

Light Fall is as pretty as it is dark, and with a few new ideas well fitted into older mechanics. It might be a little too difficult sometimes, but it's a 2D platformer with a story worth playing through.