This review is of a Cozify Smart Home Hub supplied with a NyCe Multi-Sensor, Sonos Play:1 Smart Speaker and Osram Lightify Smart Spot spotlights provided by Cozify for review purposes. The Cozify Hub launched in the UK on the 5th of May and is being sold through Vesternet and B&Q for £199.99.

Years ago, before smart phones really became the easily usable things they are today, I used to dream of a converged world. What do I mean by this? Well, back then (if memory serves), at one time or another I was likely carrying around a personal phone, a work phone, an mp3 player, a personal video player, a laptop, a camera, maybe a Palm Pilot or a Psion etc. Probably not all at once, but enough of them.

I yearned for the ability to combine some of these functionalities into one device. The obvious examples for me were phone, mp3 and video player.

Feature phones were ripe for the era of convergence. Everyone carried a phone and miniaturisation surely meant that sooner or later, the technological capability would be around to allow for this. With the launch of the O2 XDA Windows Mobile phones I got really excited about the prospect and semi-regularly got them, only to be frustrated and let down at the overall poor user experience and switch back to feature phones. I’d go through a regular cycle every year of upgrading my phone, so one year I’d get an XDA thinking “surely by now, they’ve managed to iron out the problems” but then would have so many problems with it, the next year I’d go back to a feature phone, then another XDA would get released and my personal cycle would begin anew.

Eventually of course, the iPhone became a thing and the rest as they say is history. Why am I talking about my early experiences with phones and converged technology? It’s somewhat relevant and I’ll come to the why of that statement later.

The future. It’s arriving at an amazing pace. Second by second, the stuff of dreams edges closer to us. While the flying car and hover-board are not yet really ubiquitous, progress has made leaps and bounds in many areas. A lot of this has of course been facilitated by computers/the internet and as we have ventured further afield from the traditional desktop computer to access the net, the number of possibilities has exploded.

With high(ish) speed internet access now available to most people who want it in the developed world and the fact that many in these countries carry around on our person at most times some device capable of accessing the net at a reasonable speed regardless of where we are, doing the things we want or need to be able to do has become significantly easier over the years.

Progress is important to us as a species. The ability to easily take care of things we want to in a simpler manner gives us more time to be productive and enjoy ourselves. Our increased productivity in turn allows the world (in theory) to both ease things further and enjoy ourselves further. A never-ending cycle of progress.

In many ways, the modern age is of course standing on the shoulders of giants. Without the invention of the wheel, how many things we take for granted today would not be possible? It doesn’t bear thinking about. What about fire? Same again. Gunpowder? Oil? Electricity? Integrated circuits? The internet? I would hope that most people by now understand that progress is an arc, from our earliest beginnings to the technology of tomorrow. The old underpins the new and as biological beings evolve, so too do products.

What we’re looking at today is something I’m very excited about as it represents to me a significant step in the evolutionary arc of technology. Namely, the much vaunted concept of the “Internet of Things” or IoT for short. For those who haven’t been following, IoT is basically physical devices which have generally not been “connected” historically now being connected. By physical devices I mean products in their own right which do not serve a typical computing related functionality so washing machines, cookers, heating and hot water systems, stereo equipment, TV’s, light bulbs etc.

So the concept of the “Smart Home” has been born. It’s a brave new world, there are a lot of providers out there trying to colonise it, big names like Google and Samsung among others. The key concept is one of convergence. Pretty much anything could be made smart, the question is should everything be made smart.

In this article, I’ll be reviewing a smart home hub provided by Cozify which attempts to simplify, automate, cosy up and, well, I guess cozify your home. It’s a relatively new area so this will probably be a slightly longer review than most as we explore some of the implications of the smart, connected world. If you’re just interested in the gear itself, you can jump forward to page 4 at the bottom.

Well, what is a smart home about? Personally, I feel it’s about two things. Those things being convenience and trust. Let me explain.

Convenience. Convergence as a concept has done amazing things. Where before people used to carry a transportable phone, a Walkman, a Filofax and a wallet, now they carry a phone. And not just any phone at that, a phone which allows us further convenience. The human brain is an amazing tool, but let’s face it. As good as it is, it’s not perfect. It can retain lots, interpret lots, make quick intuitive links between subjects, but this kind of human predicate and fuzzy logic thinking is imperfect at certain tasks.

As much as Einstein was a genius, I wonder if he ever left the lights on in his house? Perhaps. I know I certainly have. So the convenience here is that as smart as an individual person is, sometimes things go wrong. Our brain hiccups and we forget to do something. Or we planned for something and the plan changes and we need to adapt. The concept of the smart home is to give you added convenience in your life and allow you to adapt your home to a changing dynamic and to BE smarter. And convenience is good. We like convenience! 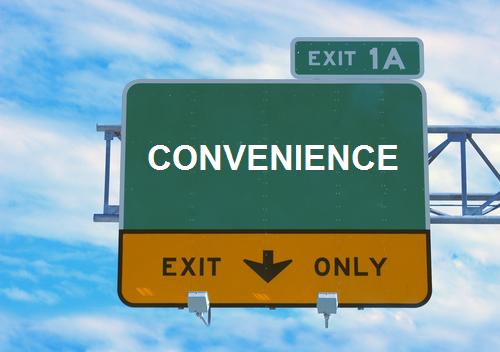 This way for convenience!

Trust. I feel pretty secure in guessing that most people on this site are aware of the Terminator series of movies and understand the concept of Skynet. Well, we’re not there yet, but that doesn’t mean we don’t need to trust that the degree of power we’re giving to someone or something is ok. Whether your AI overlord of choice is from Terminator, The Matrix, Ex_Machina or whatever, we need to trust that the stuff we leave in our house to be smart isn’t going to suddenly become stupid and go wrong, or if it is that the impact will be negligible. We also need to trust that our data is handled in an appropriate way, this is a complicated topic and one I’ll be writing a separate series of articles on later. While it’s not such a big deal to trust a computer to turn our lights on or off, what about trusting it with our cooker? Our heating? Our door locks? Our gun safe? How much trust do you want to give here?

So these two things are central to me to the question at hand. Am I willing to trust something enough for the convenience it will grant me. Well, I guess Google probably knows pretty much everything about me by now, so why not give it a try!

The fundamental premise of the smart home is one of convenience. Things that just work or which you can control while not being at home are a convenience. Certainly an expensive one in some ways, but we’ll come to that later on.