Kingston as a brand has now been functioning for over 25 years and has become the leading supplier of memory and storage solution. There products offer the reliability and performance which consumers want from products these days and with the SSD market solidifying year after year, Kingston has taken the step to offer two sects of premium storage solutions.

Kingston has currently two brands of SSD's at the moment running under their belts. One fall under the HyperX brand which are aimed for performance minded consumers while the cash cow for Kingston still remains their budget friendly V series SSDs which have now entered their third generation powered with LSI's SF-2281 SSD controller. Meet the Kingston's SSDNow V300 series!

Compared to the SSDNow V200+ which featured Asynchronous NAND, the SSDNow V300 comes equipped with the Asynchronous Toshiba Toggle 19nm Mode MLC NAND being a much more cost effective solution due to its higher density and the fact that the packaging is done by Kingston themselves too as seen internally later in this review.

Rather than using JMicron or Toshiba controllers (whose performance was not stellar), Kingston now uses the venerable LSI SF-2281 controller on the SSDNow V300. Usually, LSI doesn't require any modifications from the manufacturer's end since firmware support is provided by LSI themselves, Kingston has however labeled the LSI controller with their own logo which points to that the company may have customized the firmware for the 19nm Toshiba MLC NAND. The LSI SandForce controller features ECC and DuraWrite technologies which help protect user data in case of any drive faults.

With the SSDNow V300, Kingston would target the Business and Enterprise markets along with budget minded consumers for whom the new storage device would prove a remarkable update over a regular hard disk drive. Let's move on to the specifications.

The Kingston SSDNow V300 is SATA 3 (6 GB/s) compliant and comes in the standard 2.5 inches (7mm) form factor design which most other SSD's tend to offer. The SSDNow V300 ships in 60, 120 and 240GB capacities, we were sent the 120 GB SSD drive for our review. This is the most standard and ideal size any user would want and is perfectly fit enough to hold the operating systems and a bulk of applications.

Kingston's SSDNow V300 is advertised to run sequential reads and write speeds of 450 MB/s and features 85,000 (Random Read) and up to 55,000 (Random Write) IOPS. The SSD weighs at 86 grams, has an operating temp of around 0 - 70C and its life expectancy is rated at 1 million hours MTBF (Mean Time Between Failure). Ofcourse the life expectancy on SSDs remain applicable on the usage though most SSD's can live out years before becoming faulty or entirely dying out, atleast the rate is not an issue and SSD fail rate is lower than standard HDDs. A total of 64TB data can be written on the SSD before its P/E cycle surrenders and the drive is rendered useless. This is fairly good considering the MLC Nand specifications. Power consumption is rated at 0.640W Idle / 1.423 W Read / 2.052 W Write.

The SSDNow V300 comes with a three year warranty in which you would be provided free technical support. Retail price of the SSDNow V300 120 GB model we have for testing is $119.99 US.

The Kingston SSDNow V300 ships within a standard box packaging with an image of the drive itself followed by performance figures showing that the SSD churns out 450 MB/s in both Read and Write. You can also note that the model we were shipped is specifically referred to as "SSD upgrade kit" which means its designed for use with desktop usage. Notebook and reference SSD versions of the SSDNow V300 come in different packaging. 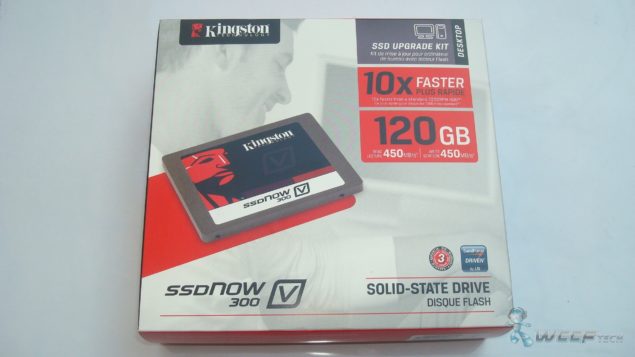 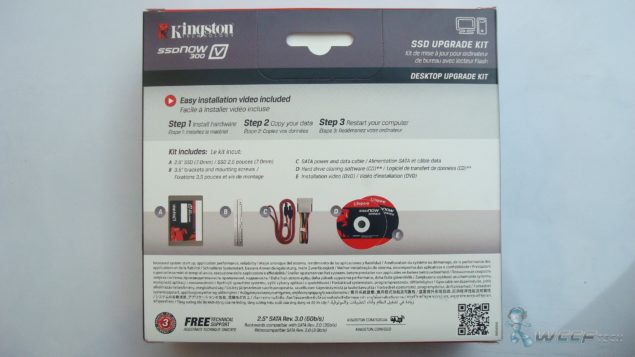 The SSD itself is packed within a cardboard package with a cardboard cover placed on top of it. It can easily be removed to reveal the contents beneath it. 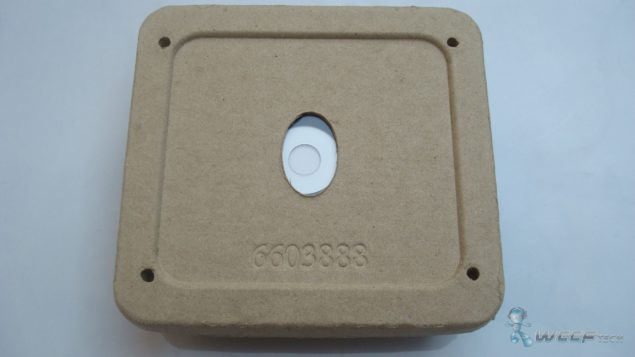 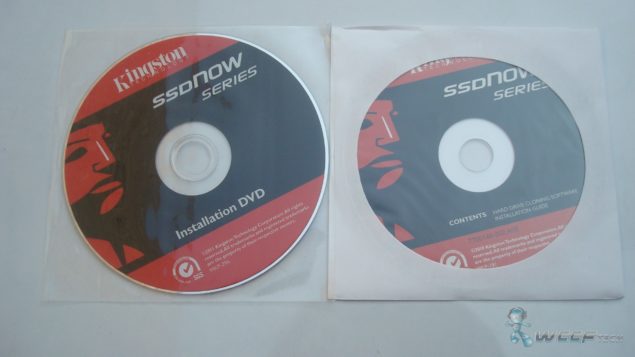 Additional accessories include a mounting bracket, SATA connector and 4-Pin molex connector which is essentially everything you need to install the SSD inside your PC. Overall a nice package so let's move onwards and unbox the SSD itself. 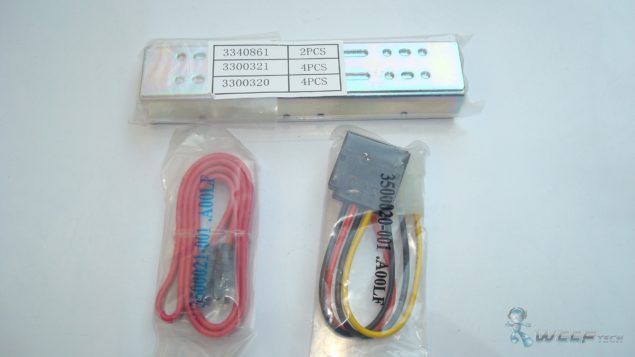 A Closer Look at the SSDNow V300

The Kingston SSDNow V300 comes inside a 2.5" form factor design with dimensions of 69.8mm x 100.1mm x 7mm. It has a huge Kingston logo and SSD label on it that clearly mentions "Warranty Void if Removed". 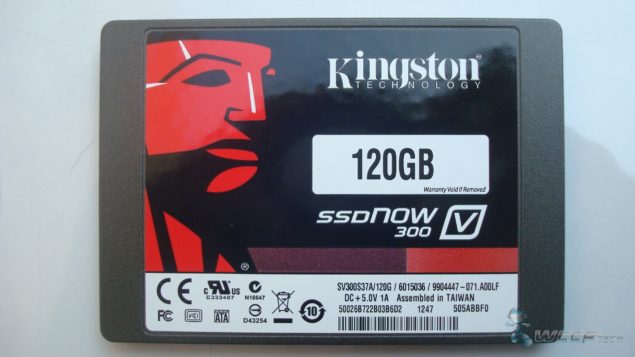 The backside is pretty bare with a rugged grey color, four screws keep the SSD case intact. Again, there's the "Warranty Void if Removed" sticker on one of the screws. We had to remove it to view the internals. 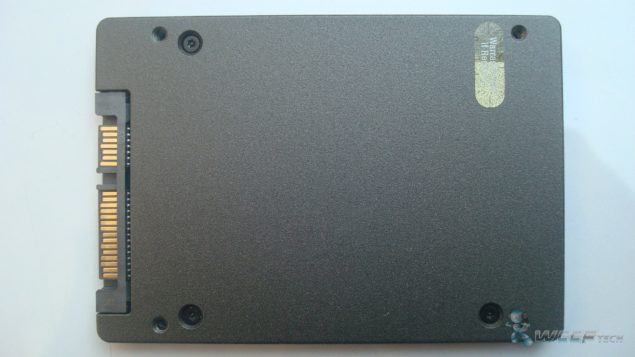 The sides of the SSD have holes for screw which are kept their to attach it with the mounting brackets supplied with the unit. 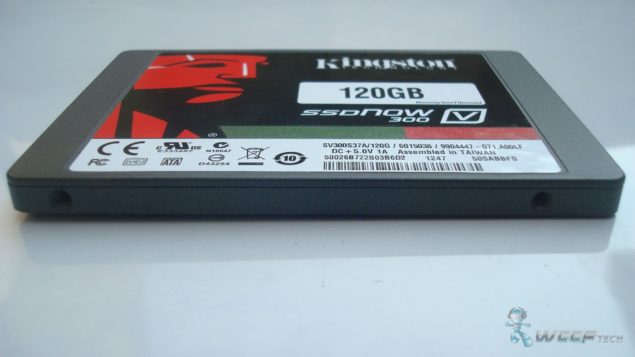 Before moving to the internals, a quick look from the back reveals the SATA III / II compliant connector and power port. 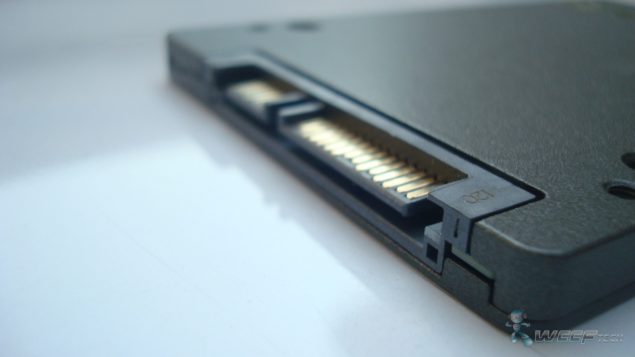 The PCB is of blue color and is cooled off with two individual thermal pads for dissipating heat and reducing shock damages while handling. The PCB is made up of 16 MLC Nand Flash modules, 8 on each side of the PCB. They are  labeled FT64G08UCT1 and are essentially Toshiba modules rebranded by Kingston, same goes for the LSI - SF2281 which bears the Kingston logo due to enhancements made inside the firmware. 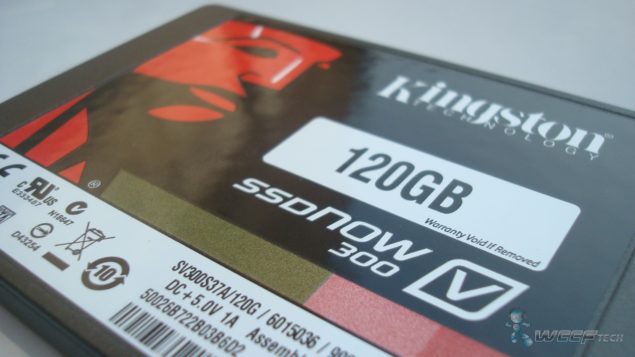 For testing we opted for the X79 platform since we had that hooked up at the while of testing. We used a variety of other drives for comparison on the Windows 8 64-bit operation system.

SATA 3 (6 GB/s) was enabled for all drives we used for testing. A quick look in Crystal Disk Info confirmed that the drive had  NCQ and S.M.A.R.T. are enabled with the transfer mode SATA 6 GB/s enabled. The SSDNow V300 was installed with the latest 505ABBF0 firmware.

For performance testing we used a wide variety of synthetic and real-time benchmarks to evaluate the performance of Kingston's SSDNow V300 120 GB as well as comparing it to the other SSDs we listed in specification sheet posted above.

ATTO Disk Benchmark is a very popular benchmark that tests storage devices among a wide range of file sizes. It reflects how the drive will perform in real life. The drive speed is measured through both raw read and writes through the default run through 0.5 to 8192 KB with a total length of 256 MB. However, Sandforce SSDs tend to perform marginally better than other solutions since the ATTO benchmark uses compressible data, the controller performs slower with incompressible data usage. 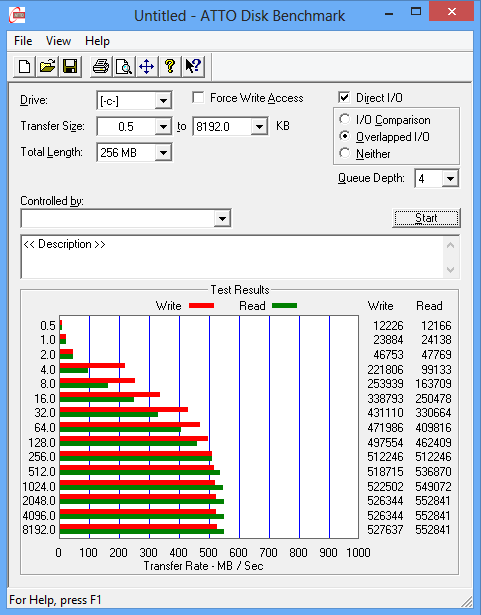 HDTune Pro is another one of those commonly used benchmarks to evaluate hard disk and SSD performance. It is also used for (sequential read and write tests), scan for errors, check the health status (S.M.A.R.T.) and securely erase all data etc. Since HDTune Pro provides a more accurate representation of storage devices performance, we did the comparison of the SSDNow V300 with other drives in this specific benchmark. 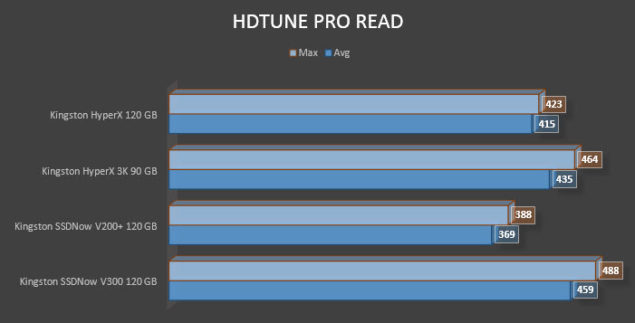 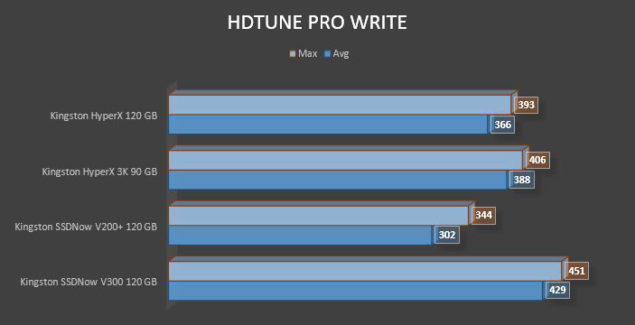 Kingston SSDNow V300 performs even better than the HyperX branded 3K 90 GB SSD which shows the marvel of LSI's Sandforce controller here. It truly demonstrates that one should not under estimate the performance of SSD targeted towards a "Value" V crowd.

CrystalDisk is a neat tool to test sequential and random speeds at different sizes and allows you to select the number of iterations and file size. It uses data that is uncompressible by drive’s processor and reflects performance of your drive if you load it up with small files like JPG, MP3, and AVI etc. 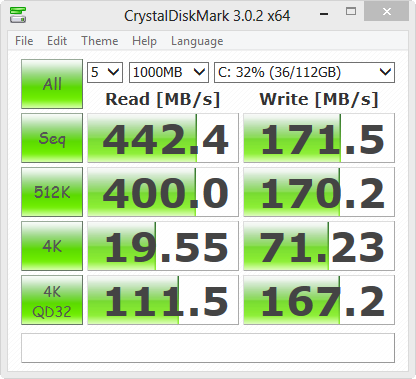 AS SSD is another nifty benchmark tool designed to test hard drive performance. Here we noted that the overall sequential times were rated over 450 Mb/s however Write speed feel down to 162 Mb/s due to incompressible data transfer. Hence the SSDNow V300 scored a total of 491 marks. 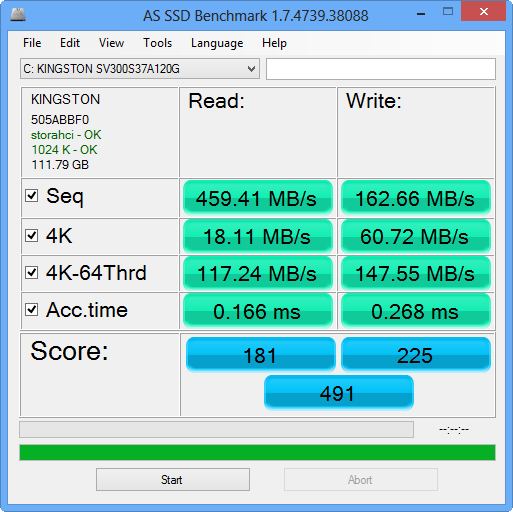 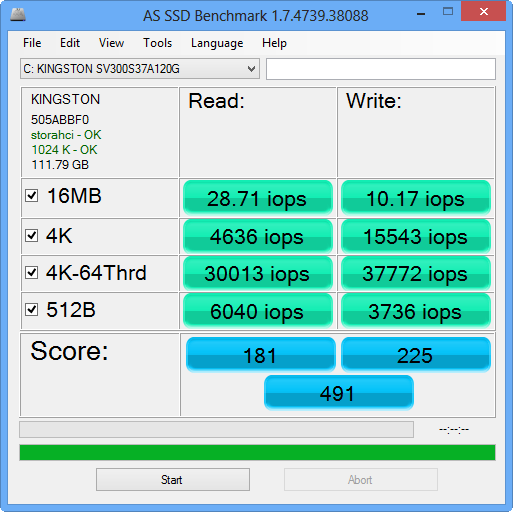 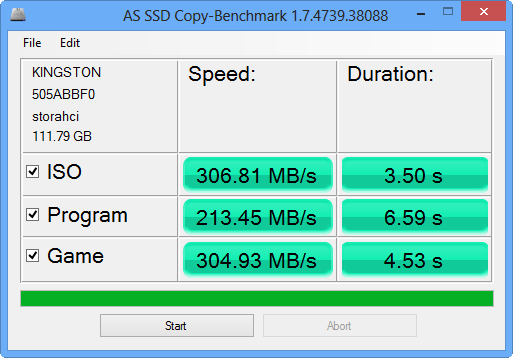 AS SSD can further provide copy, compression benchmarks based on different levels as seen below: 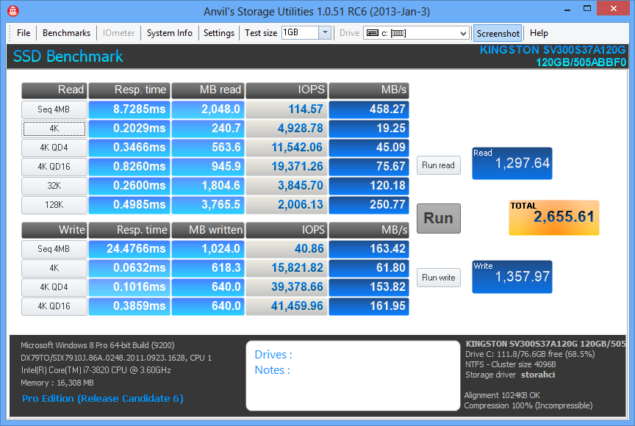 PCMark 7 is a complete benchmark suite for users which can evaluate the overall performance on a PC in a matter of minutes. The Storage test is a collection of workloads that isolate the performance of the PC’s storage system. You can choose to test other storage devices in addition to the system drive. At the end of the test your system is given a Storage test score. 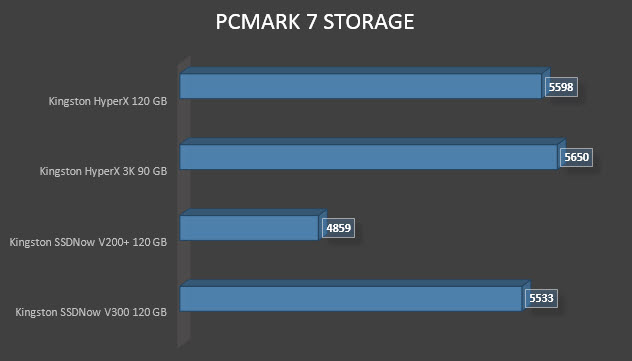 No SSD test is complete without a demonstration of how fast it can boot into the operating system. The OS we used was Windows 8 64-bit and is a pretty fast loader compared to Windows 7 even for average HDDs. The SSD Now V300 booted up to the logon screen in a mere 4 seconds and took around 26 seconds for the desktop apps to load. 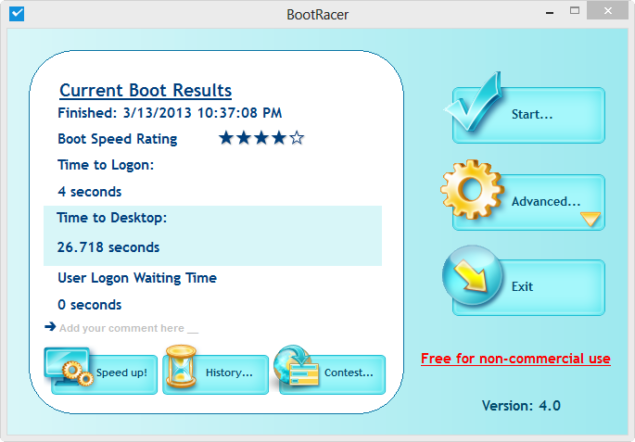 The load times were nice since the Windows 8 we installed was fresh so as we fill in the space with more applications, the boot time would increase.

After quiet some time with the SSDNow V300, all i can say is that Kingston has delivered an exceptional update to their value oriented SSDNow series. The V300 SSD in our benchmarking process came out as a pretty fast storage solution, one which even gave a hard time to Kingston's own HyperX branded performance SSDs. The sequential and 4K transfer speeds were great for a value drive like the SSDNow V300, however it did lack behind a bit when tested with incompressible data but that was expected since its based off the LSI SF-2281 controller. Most notably the enhancements to the Sandforce firmware by Kingston which we mentioned in the beginning of the review are at work here which end up delivering some really good numbers.

At the end of the day, the users Kingston's SSDNow V300 is targeting are enterprise, business and casual users. For most PC users who don't have the extra cash to burn on a high-end SSD storage solution, Kingston SSDNow V300 is the perfect choice for them that offers absolutely amazing performance at a price which doesn't hurt your wallet.