The AORUS Z390 Master is styled in black and silver. This is a top-tier product that retails at $290 US so expect lots of features packed inside this motherboard. The motherboard comes in the standard ATX form factor. The Master series replaces the Gaming 7 products which have always been the go-to products for high-performance gamers and enthusiasts while the Xtreme tier products are aimed at the premium high-performance market. 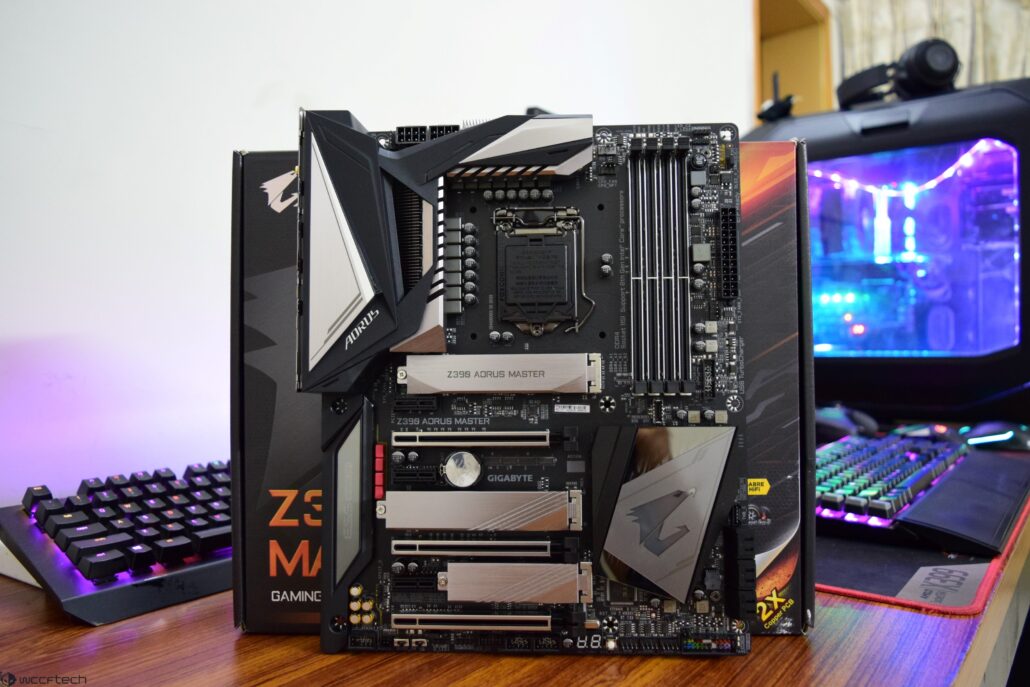 The back side of the motherboard has a base plate which comes with additional thermal pads to interact with the electrical components on the back. This offers better thermal conductivity through the back side and the shield provides more durability to the motherboard. 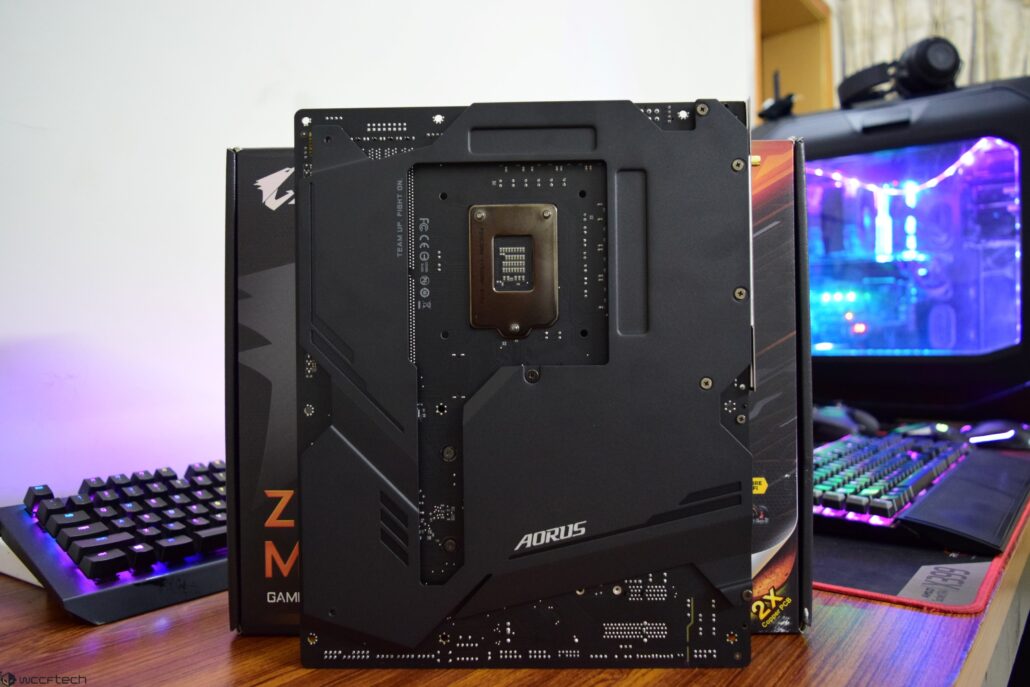 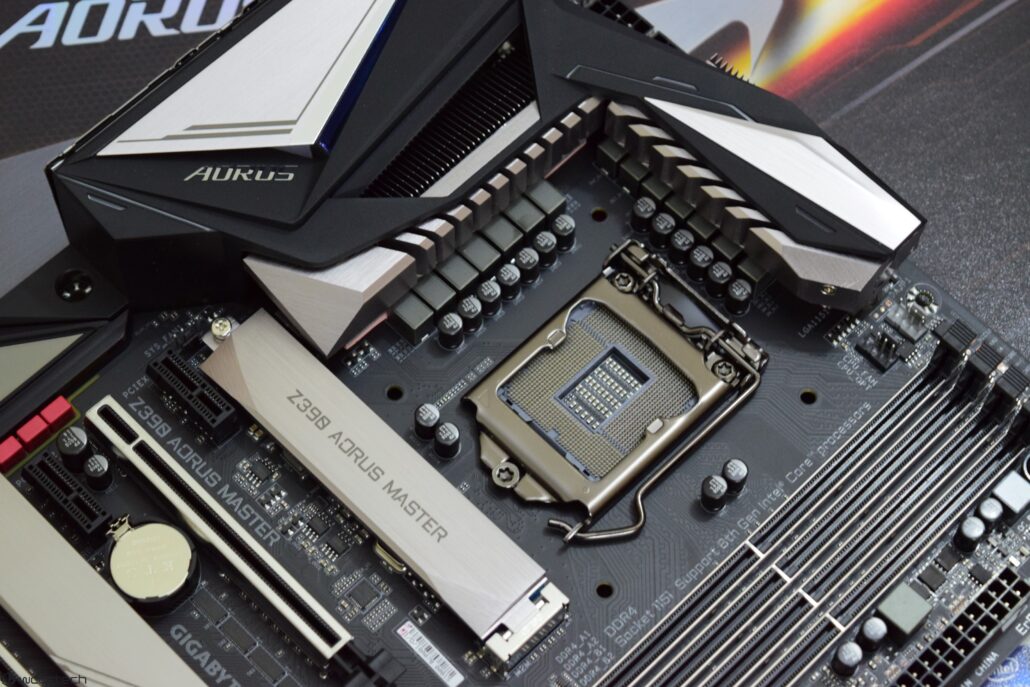 Next to the socket are four DDR4 DIMM slots which can support up to 64 GB dual channel memory. These slots are rated to support XMP profiles up to 4266MHz (OC Plus). Each slot is labeled, making it easier to install DIMMs in the proper orientation. 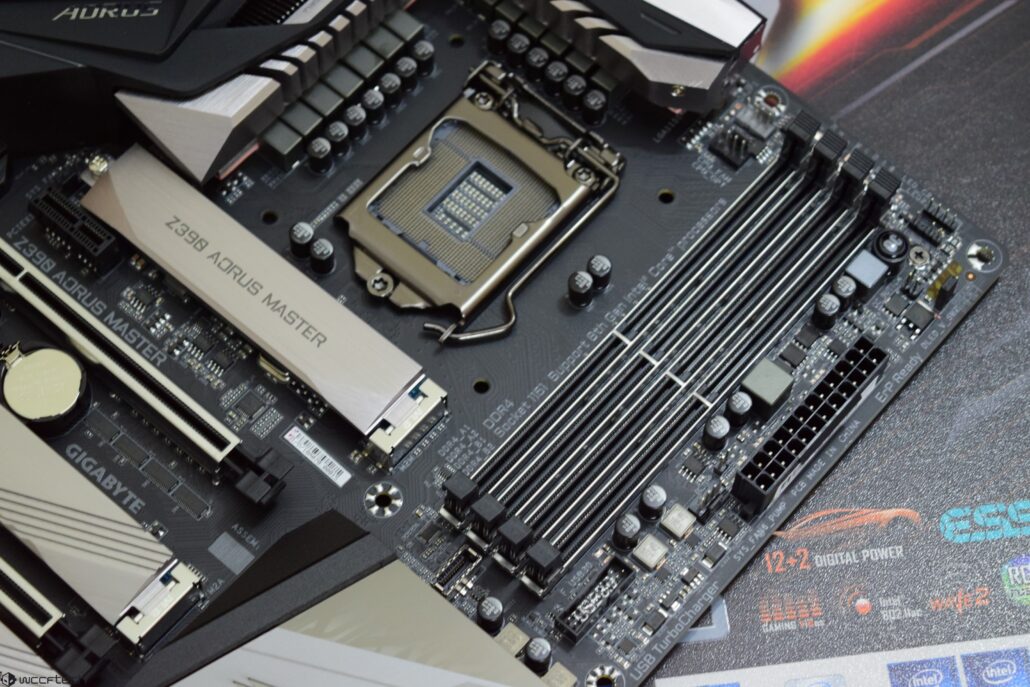 The interesting thing is that Intel has said to allow memory capacity support of up to 128 GB but that would mean that DRAM vendors would have to release dual-capacity memory kits that utilize 16Gb dies and ensure that they are compatible with these boards. All four DIMM slots feature the metal shielding which offers increased durability.

AORUS has been offering these since their 200 series motherboards and they do add to the quality of the board. Previous generations had also embedded LEDs but AORUS has gone away from that design scheme to offer Digital LEDs on different Accent zones spread across the motherboard. 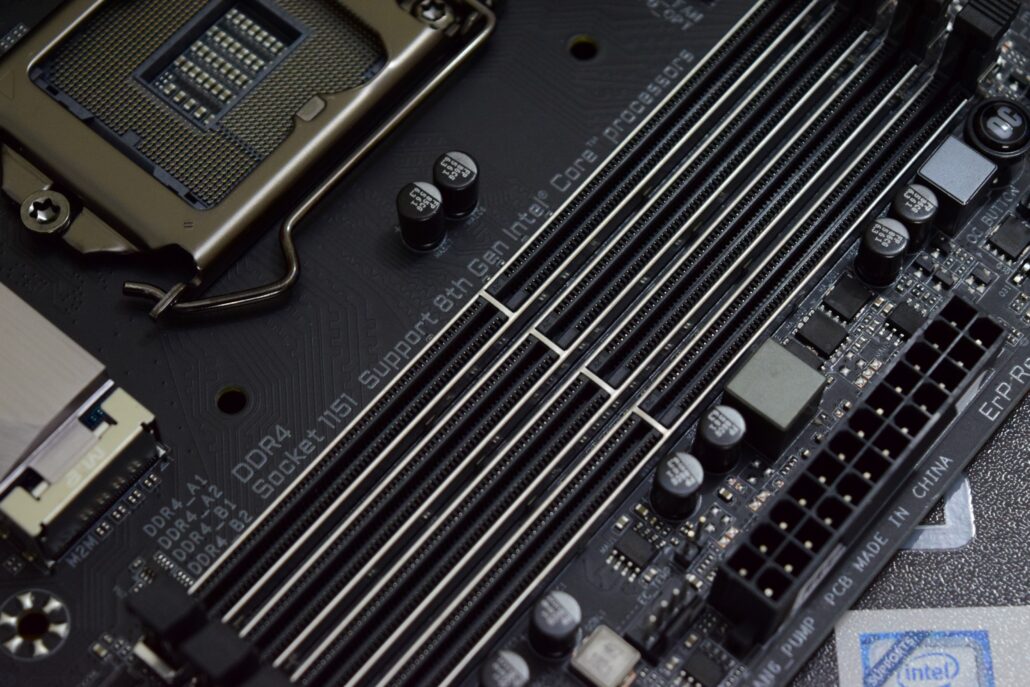 The only other board to use International Rectifier components is the Z390 AORUS I Pro WiFi which has a 6 phase design IR35201 PWM unit (IR3553 40A MOSFETs) but no Doublers like the high-end models. All of these motherboards should ensure top-notch overclocking and the best stability on unlocked 9th and 8th Gen processors. AORUS themselves state that the boards will offer 5 GHz+ overclocking capabilities across all 8 cores. 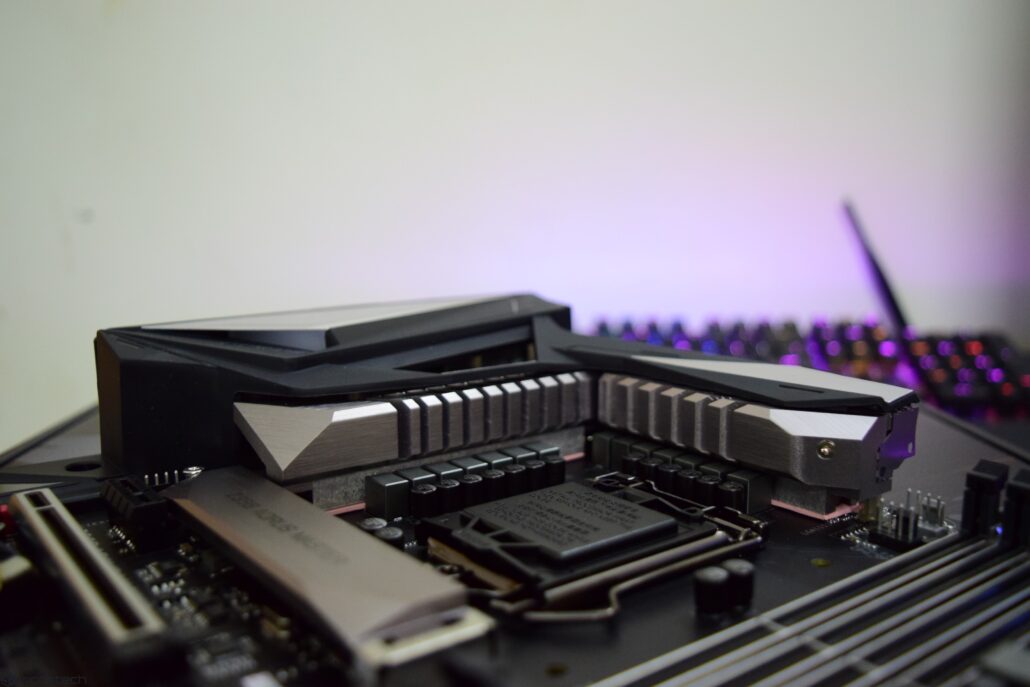 If you look in closely, the heatsink solution comes with heat pipe cooling that runs across the entire length of the dual heatsinks. The heatsink is a combination of various blocks, the most impressive of which is the Direct Touch fin stack that embeds the copper heat pipe. AORUS claims that the fin heatsink offers up to 30% temperature reduction compared to traditional aluminum blocks. 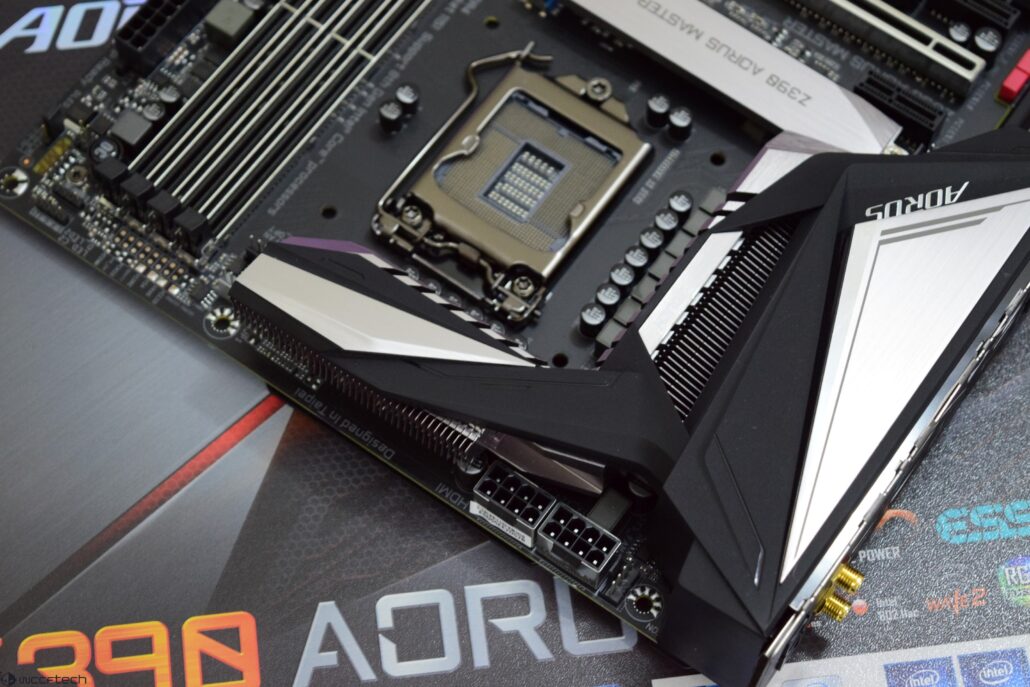 The fin stack is actually embedded on top of the main aluminum heatsink and I cannot a slight gap in between them which is filled by a high thermal conductivity pad. This would ensure that air does not get trapped within the opening. The main aluminum block features the direct touch heatpipe solution which disspates heat from the VRMs effectively. 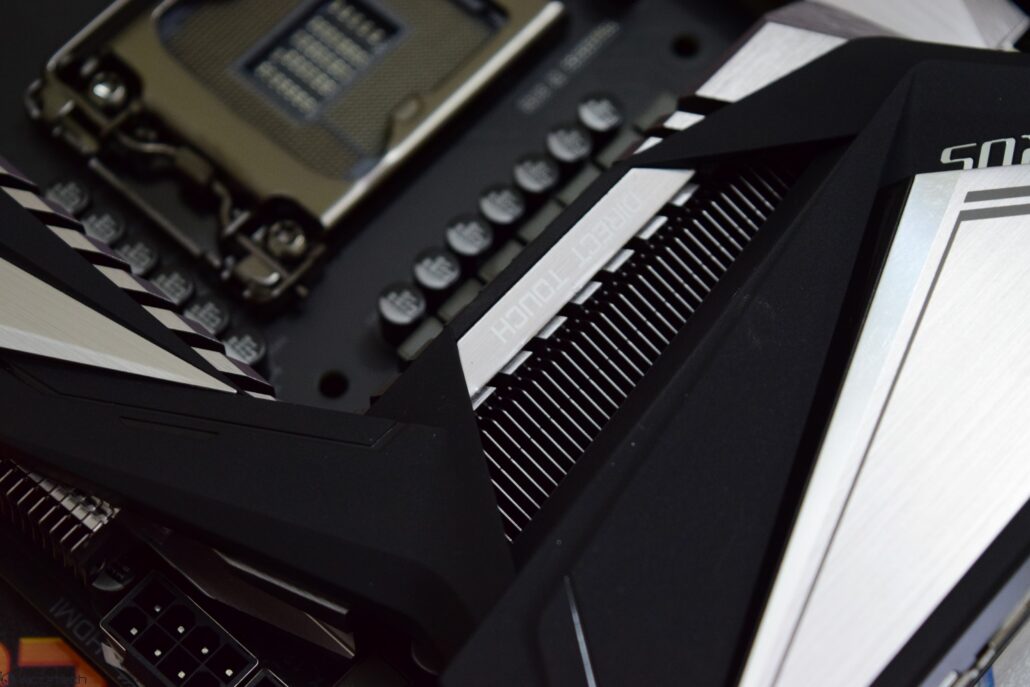 AORUS is also using Digital LEDs within the top I/O cover that gives a nice effect, emitting light through the fin stack when the motherboard is operational. 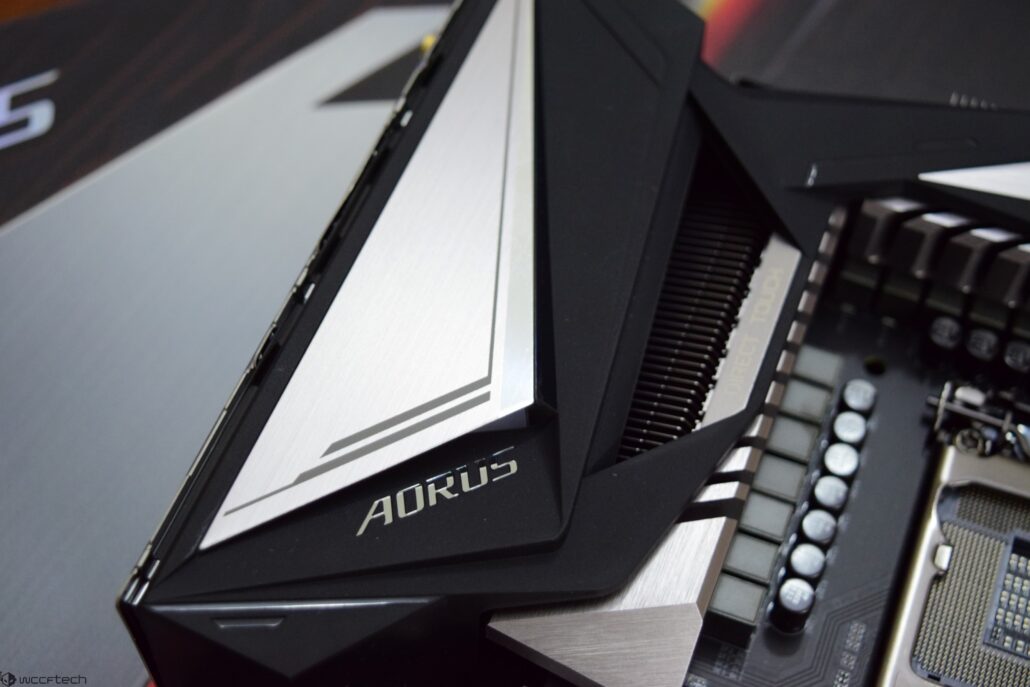 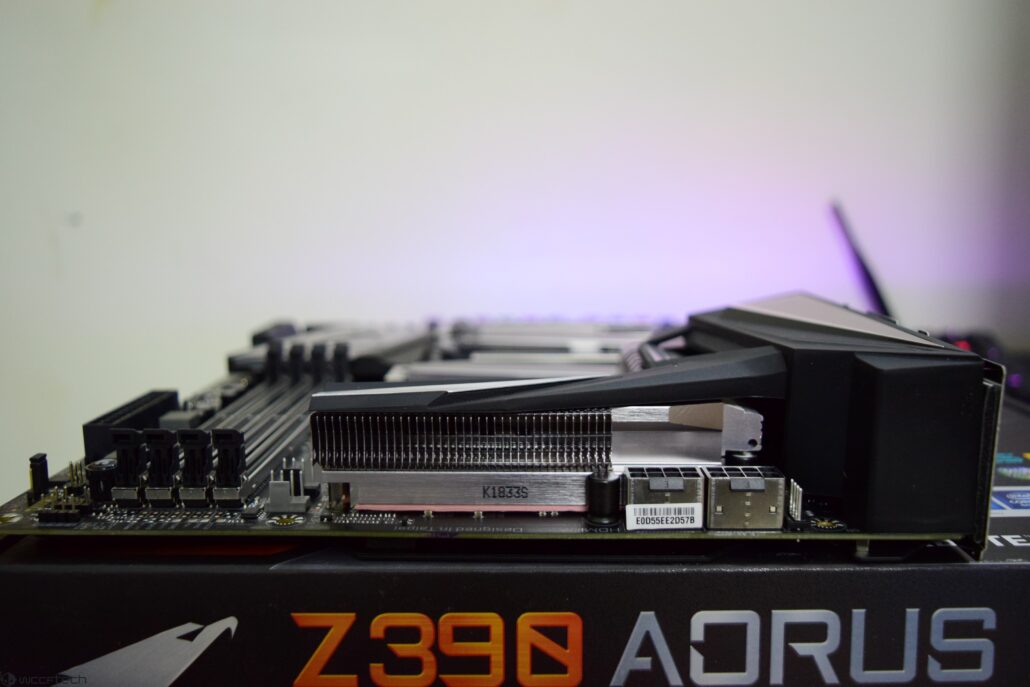 The CPU is supplied power through an 8+8 pin power connector configuration. This will feed the CPU with up to 300W of power. Most Intel CPUs will be shipping with TDPs under 100W but that changes when users overclock since that changes the power limit based on applied voltages and clock speed.

On close inspection, you can see that the power connectors are braced using metal shielding. These including the 24pin ATX connector use the solid pin design that has a larger contact area for electric current to flow through and higher metal quantity to sustain higher power draws. 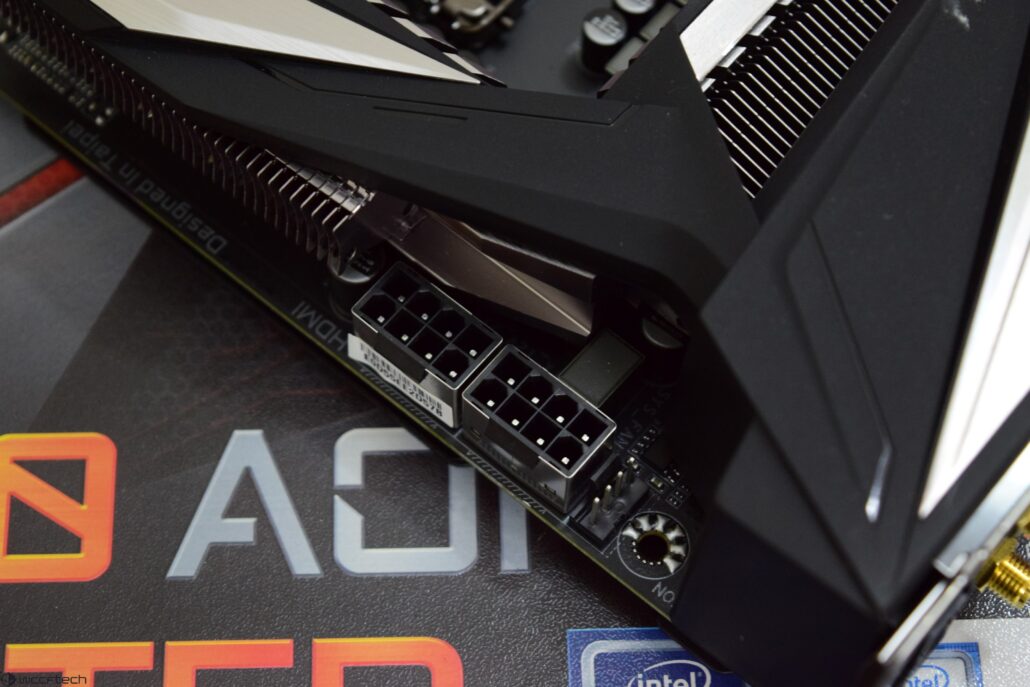 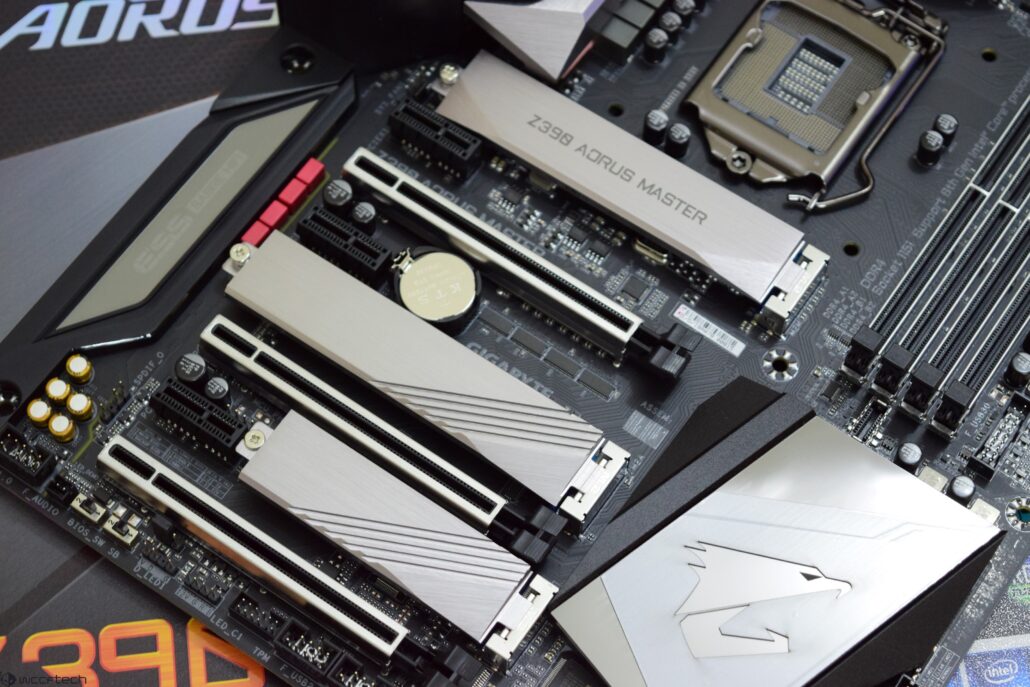 AORUS is using their Ultra Durable PCIe armor on the sides of the expansion slots which provides protection to some extent. It adds more retention and shearing resistance by reinforcing the slots with metal plates. Aside from adding more protection, they do look really sweet. 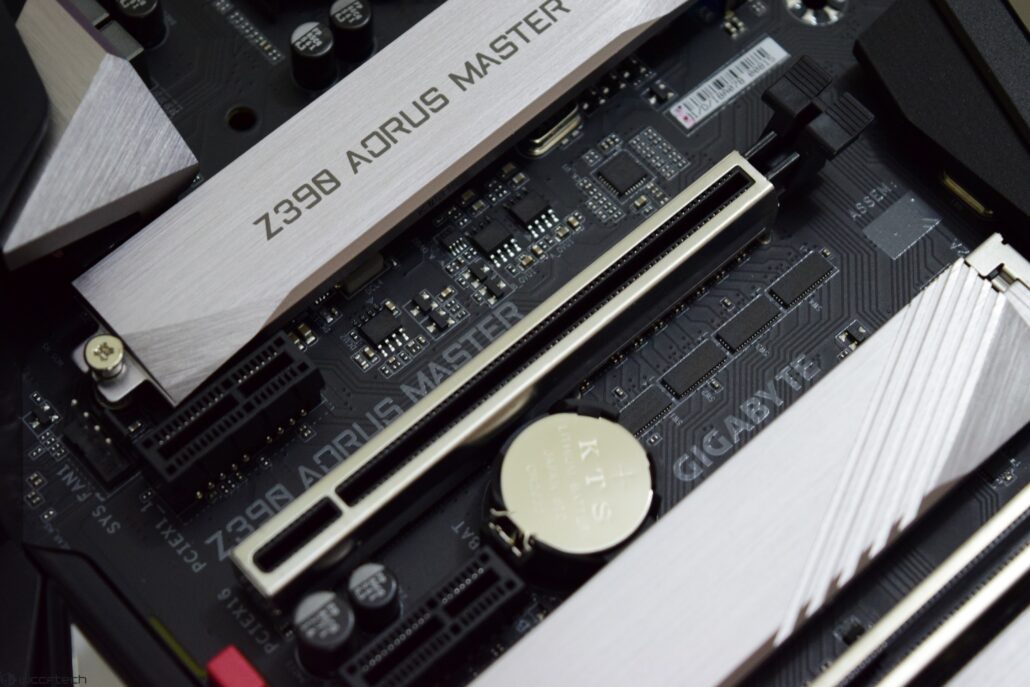 All three M.2 slots feature the M.2 Thermal Guard that comes with a large metallic plate, acting as a heatsink and further includes a thermal pad that can sustain higher temperatures when storage devices (M.2 SSDs) are stressed for long durations. 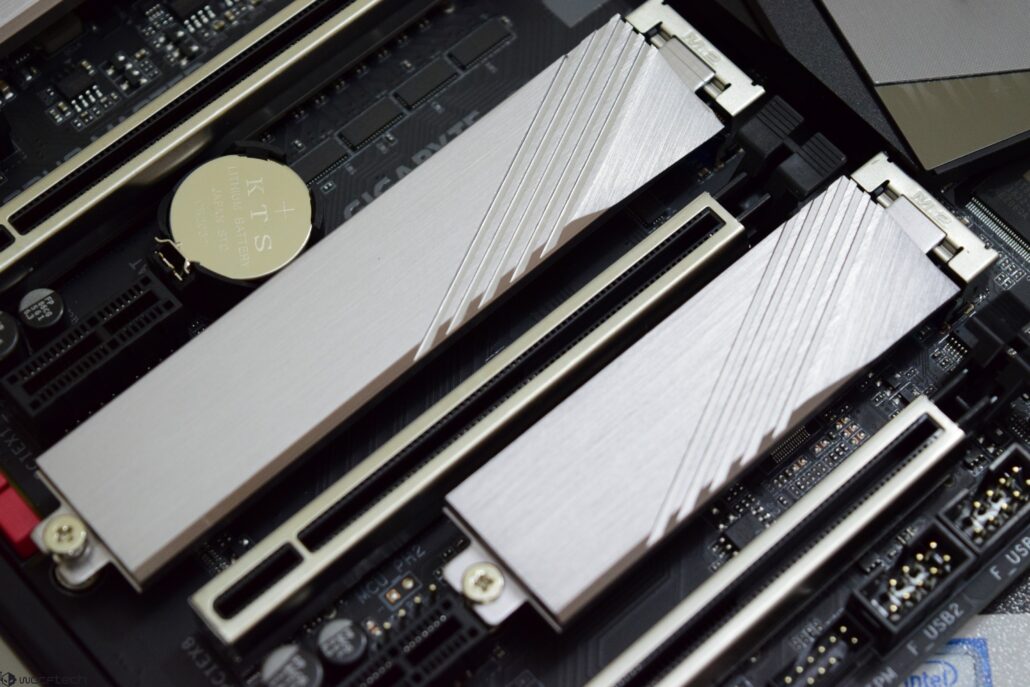 The PCH is cooled off by a large metallic heatsink which runs next to the SATA ports. The PCH heatsink has embedded Digital LEDs and provide a good light show for those that are interested in RGBs trend. You can also turn off the LEDs entirely through AORUS's bundled software if you are not a fan of such LEDs. 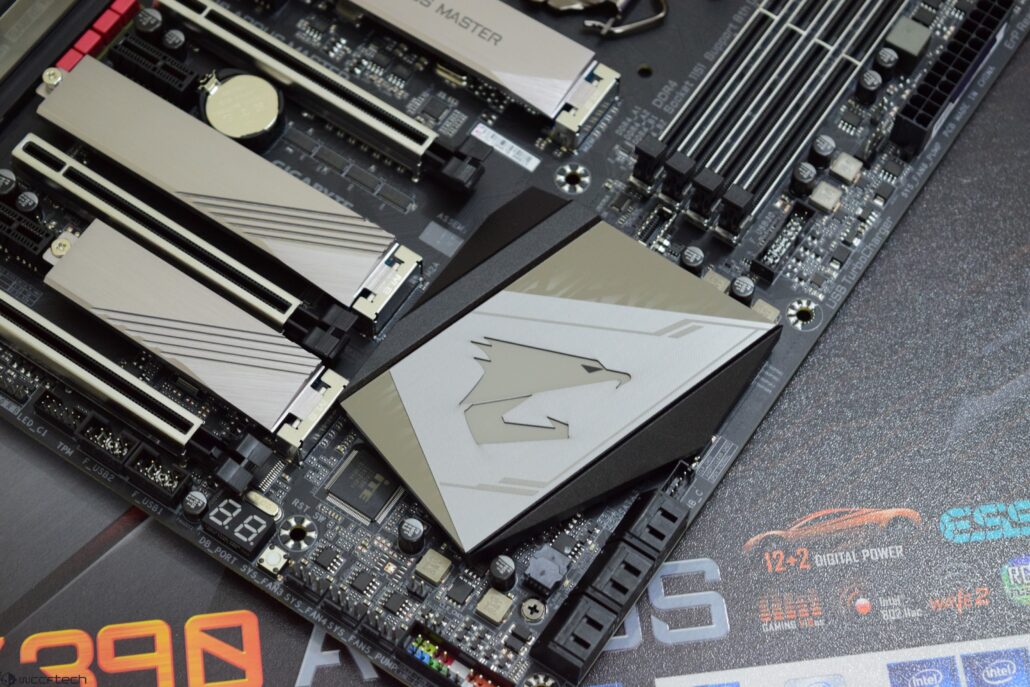 The PCH heatsink is themed to represent the AORUS Falcon logo which offers a nice touch the motherboard. 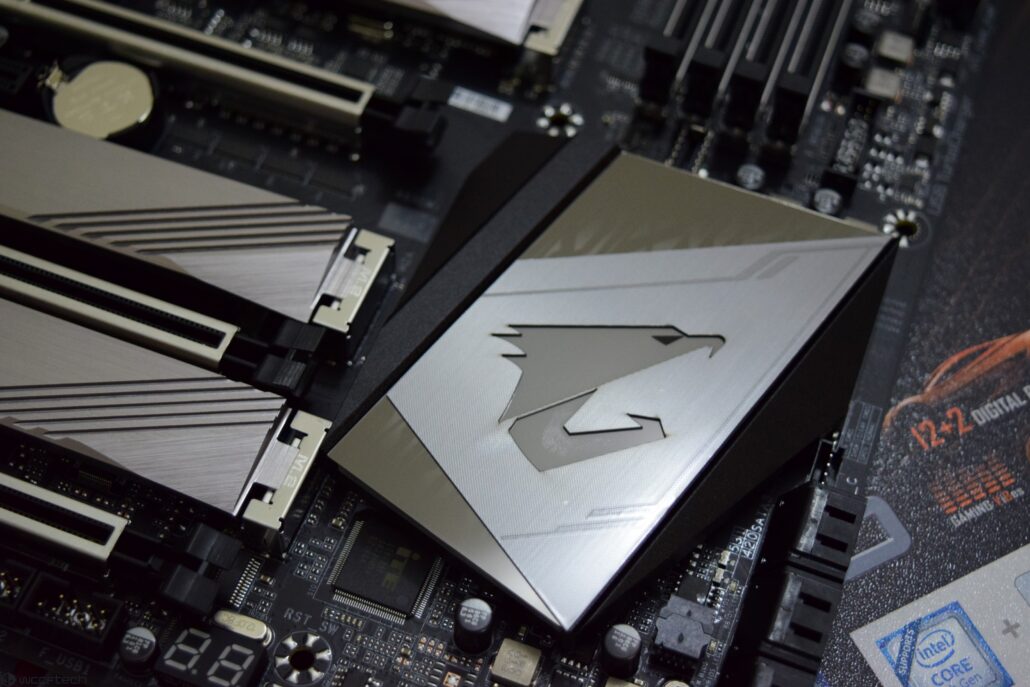 Storage options include six SATA III ports rated to operate at 6 GB/s. These can support a total of six different storage devices at once. There's also a right-angled USB 3.0 front panel connector. Many fan headers and jumpers can be found beneath the storage ports. 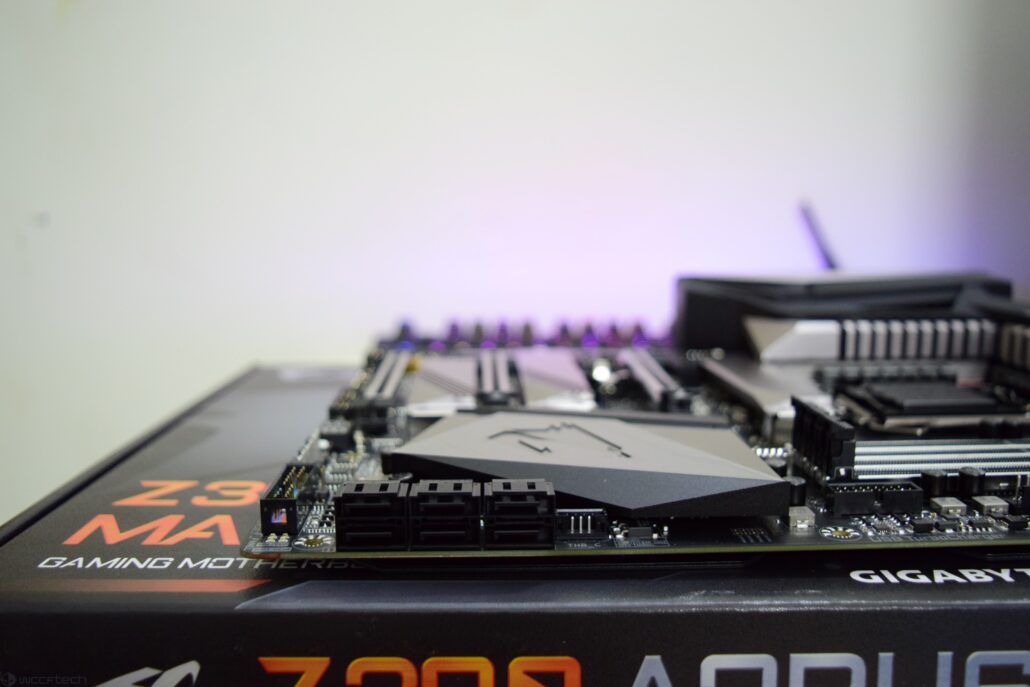 AORUS is using the latest high-end ESS Sabre DAC (ES9118) and ALC1220 Audio Codec for sound enthusiasts. There is a range of audio technologies available on the board which include audiophile-grade WIMA capacitors and Nichicon caps while the precision audio stream (TXC Oscillator) chip offers precise time triggers to Digital-Analog converters. 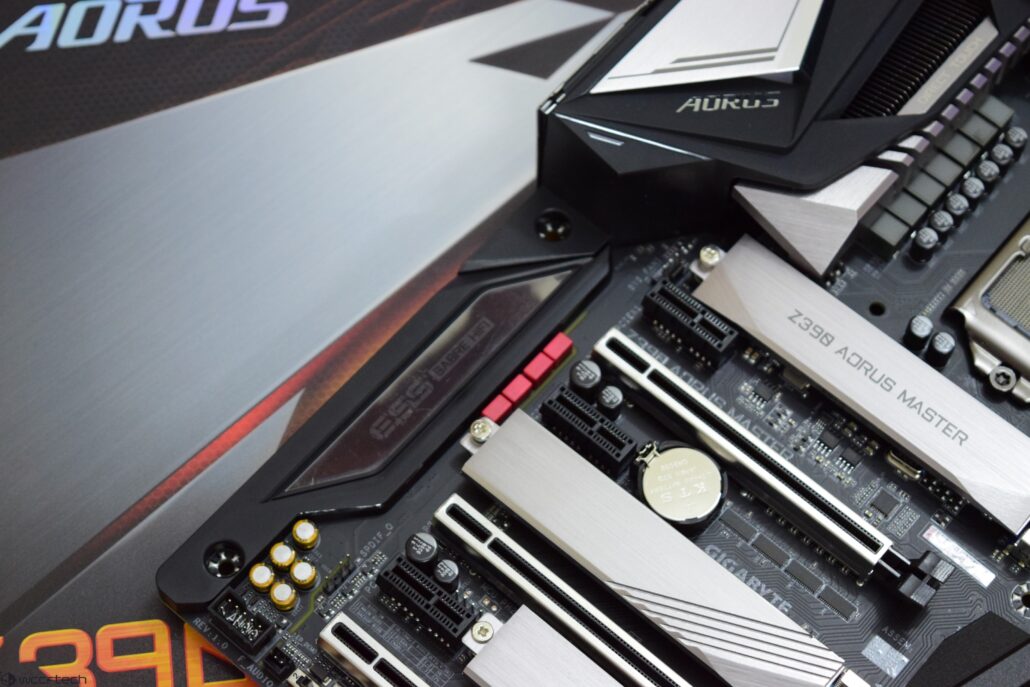 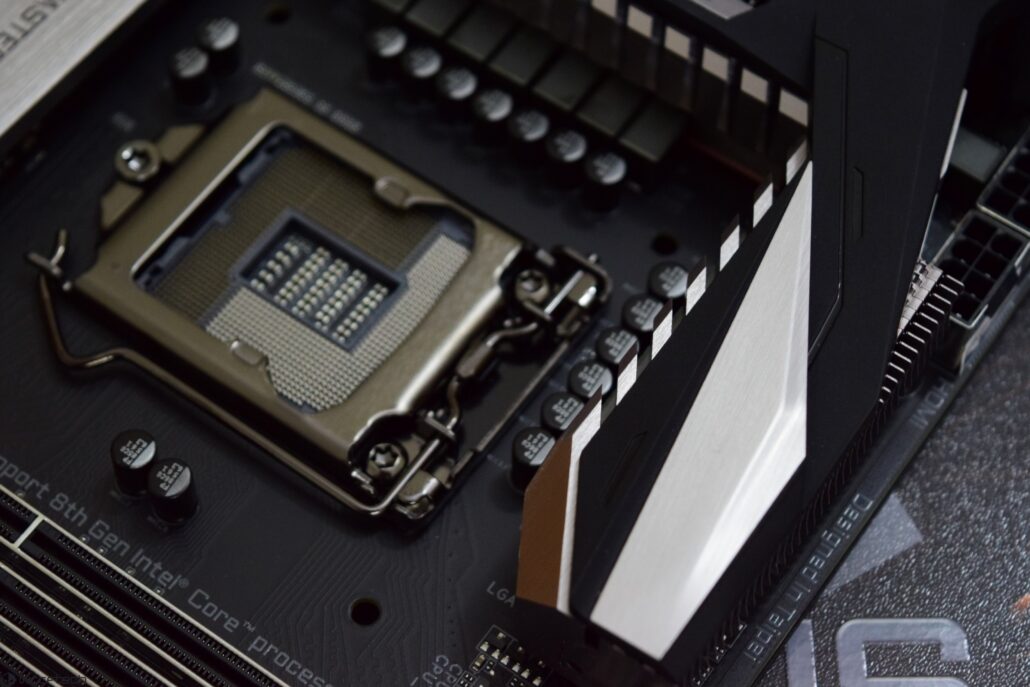 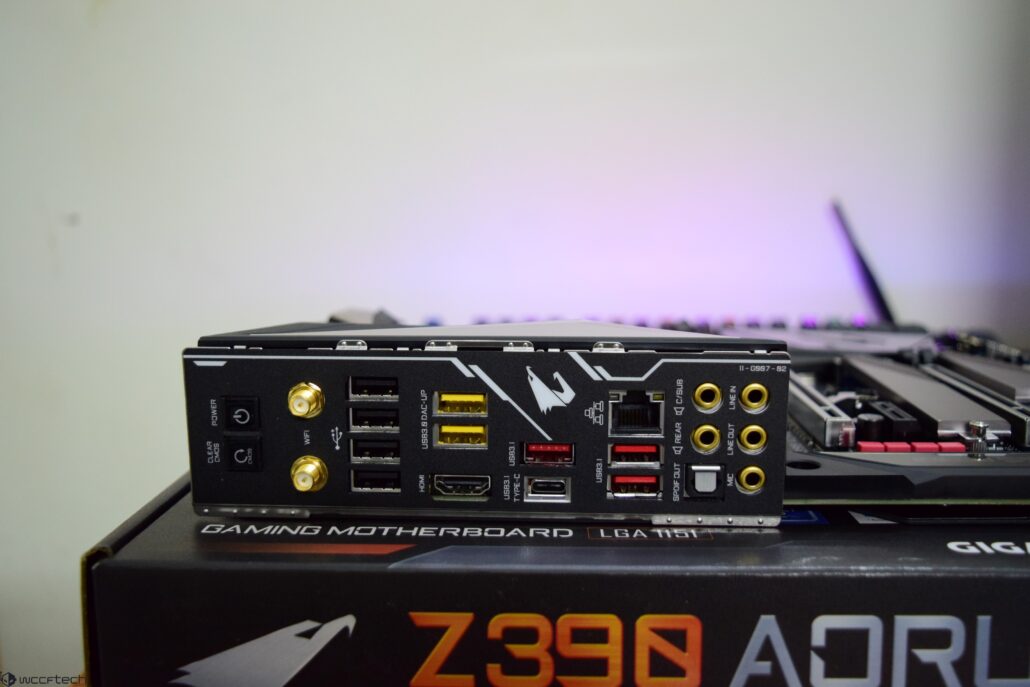 AORUS is using their RGB Fusion technology to power the lighting system on the Z390 Master. There's a range of customization available through the app which can be downloaded directly from AORUS's official webpage. 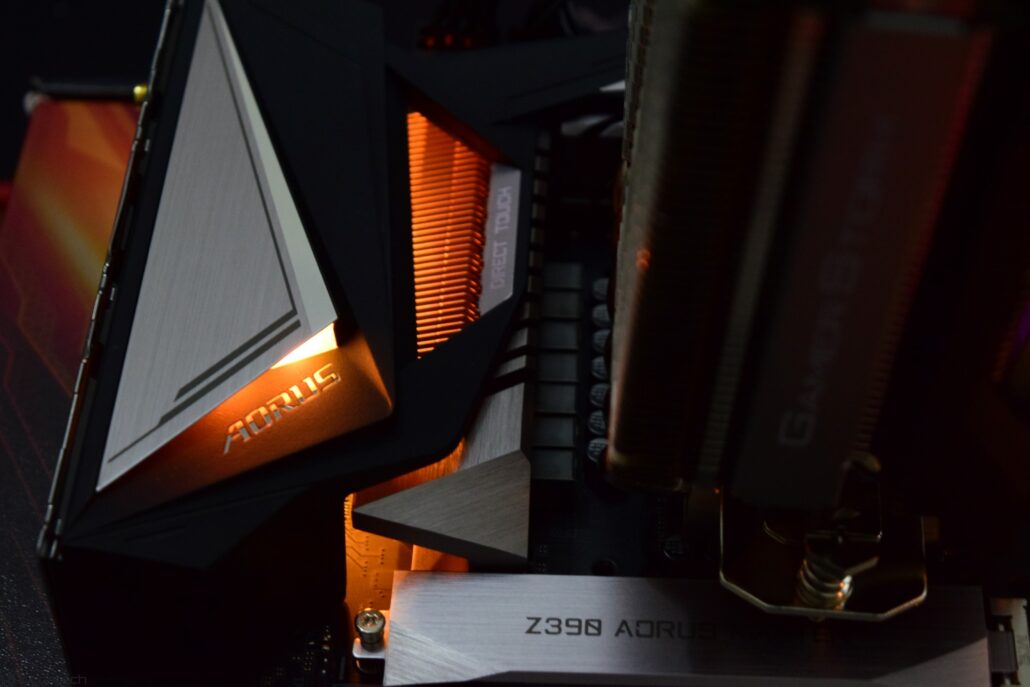 In addition to the built-in RGB illumination, it also features onboard RGB headers and an addressable RGB header that allow the motherboard to be connected to compatible LED devices such as strip, CPU fans, coolers, chassis and so on. Users may also synchronize RGB LED devices across the RGB Fusion Sync-certified accessories to create their own unique lighting effects.