The Intel Core i9-9900K is the flagship chip of the 9th Generation family and it is the one that users will be the most excited about. The competition has finally prompted Intel to reach core parity with their flagship parts and the result is Intel's own 8 core and 16 thread CPU, running up to 5.0 GHz at boost frequencies.

In terms of performance, Intel's claimed that this is the best gaming processors and we fully agree with them. It provides blistering fast gaming performance and now we can see that Intel definitely has the IPC and clock speed advantage, even with an 8 core, 16 threaded part. This provides an ample amount of gaming, streaming and multi-threading performance which mainstream users have been asking for so long.

But there's more than performance when it comes to testing a processor. Intel might have claimed the performance throne but there are other issues with the Core i9-9900K. Starting off with the price, the processor has been claimed to have a retail price of $488 US but after looking closely at the slides provided by Intel, those are 1K unit prices. The actual consumer would have to pay more than that. As of right now, the Intel Core i9-9900K is listed for $579.99 US on Newegg and $529.99 US on Amazon. The AMD Ryzen 7 2700 which is also an 8 core, 16 thread CPU retails for less than half the cost of the Core i9-9900K. Even the faster Ryzen 7 2700X has a retail price closing in at half of that for the 9900K.

Intel does have the performance advantage but considering that a person building a PC around the 9900K would be gaming at no less than 1440p or 2160p, where the applications (games) are more GPU bound than CPU, the pricing doesn't look great at all. Moving on, in multi-threading workloads, Intel is now crushing the competition since their cores run faster but if you want a higher core count chip, a Ryzen Threadripper 1920X with double the cores and thread now retails at less than the asking price of the Core i9-9900K. The platform price is definitely higher on the X399 side compared to Z390 but then again, the option exists for users who are looking for more core crunching power.

Now the overclocking is really great on the Core i9-9900K. The AMD Ryzen 2000 series is hard to get up to 4.3-4.4 GHz but Intel's 8 core and 16 thread CPU can overclock up to 5.3 GHz across all cores. That's a stunning overclock for such a chip and if you are lucky to find a binned chip and add a custom loop, you'd be able to go beyond that. You'd need a better board though like the Z390 Taichi Ultimate I used here with suitable amount of power delivery for overclocking. The problem here is that the architecture and process are still the same as the 8th Gen and power consumption rises a lot when overclocked. In terms of cooling, the STIM package really helps but not as much as we hoped for. Furthermore, the overclocking community would face a slightly harder job delidding the chips so you gain some but lose some abilities with STIM.

I think that the Core i9-9900K is definitely one of the best gaming processors on the market and the 8 cores mean that just like Intel's previous best CPU, the Core i7-8700K, you get more cores, faster multi-threading performance and a great feature set on the new Z390 platform that offers users a lot of expandability on their new gaming PCs. The only main concern right now is the price which isn't what Intel promised to consumers and you are literally paying HEDT price for a mainstream CPU.

The AORUS Z390 Master is a feature loaded motherboard and excels upon everything that made the previous AORUS Gaming 7 motherboards great. I'd start with the design which this motherboard gets everything right about. Retaining the ATX form factor and not overdoing with the flashy RGB gimmicks, the Z390 Master uses all the space available to provide more headroom for overclocking, more storage and I/O capabilities and better cooling out of the box.

It’s 12 Phase IRDigital Power Supply is one of the best with solid component and circuitry design that led to 5.3 GHz on the Core i9-9900K with a breeze. The BIOS itself could use slight updates as it is the main department that AORUS needs to put attention to considering they have a great overall product designed for consumers. My issues with the BIOS is that it's slightly prone to lag and sluggish operation while not saving profiles after a reboot in many panels. Aside from that, you'd see a plethora of options listed under the same panel which should be segmented for easier accessibility. The easy mode is there with auto overclocking options but those who want to take the extra step and tune the motherboard and processor to their own will need a good BIOS.

You'd be surprised to see the heatsink solution and backplate used on this motherboard. From my own testing, I saw a marginal decrease in temperature around the VRM area compared to the previous Z370 Gaming 7 from AORUS. The fin stack design does help here a lot, keeping the VRMs cool and operating at a stable load.

The AORUS Z390 Master series is built for high-tier memory support and DDR4-4266 is just a fraction of what’s possible. AORUS has told that their motherboards can run DDR4-4400 MHz memory kits with a breeze with further clocked memory being allowed through X.M.P support. More DRAM manufacturers are now launching kits with speeds beyond 4500 MHz+ that these Z390 high-performance motherboards can make full use of.

The whole feature set for this motherboard such as Realtek ALC1220 audio codec and the ESS SABRE HIFI DAC for audiophiles, a ton of USB 3.1 (Gen 1 / Gen 2) ports and triple M.2 ports (all with their own Thermal Guard heatsinks) is an eyecatcher for gamers.

In terms of storage, you’d find 6 SATA III ports which are good enough for enthusiasts in addition to the PCIe based storage connectivity. The wireless dongle on the motherboard provides good WiFi coverage over a large distance. Plus, you'd find a pre-fitted I/O cover which is a must for a motherboard designed in 2018. 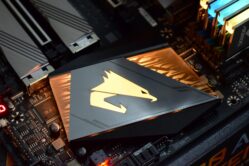 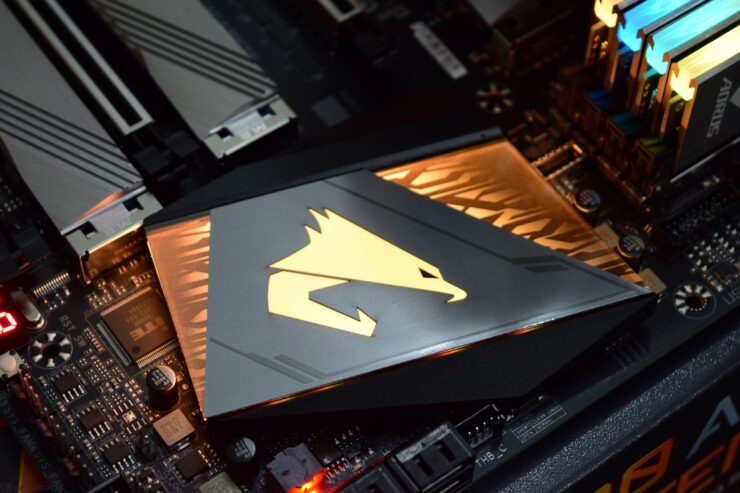