If there were a card game based upon the icy grip of depression, I would like it to turn out somewhat like Frost. The forced march to outlast an approaching polar event is something unique for any video game and doubly so for a deck-building card game. With frostbite only a few steps behind, how does that slow march to hearth and home hold up on consoles?

Part of the charm to Frost is in how quick it is to pick up and play. Like any good deck building game molded in the vein of Ascension or Dominion, you start with a preset deck of ten cards, typically an assortment of food, wood, survivors, and waste of space despair cards. In the optional scenario missions, these decks will be set up differently with each scenario member having a unique starting deck to brave their particular challenges in addition to abilities unique to that chosen archetype. Resources are regularly spent and either discarded or exiled from your deck to purchase new cards of both one-time use and permanent upgrades that offer a much better shot at survival if you play them at the right time. Frost is purely a solitaire experience and it’s better for this, as I certainly wouldn’t want to put my life in another player’s hands when it comes to trying to survive through this hellish winter.

Frost’s aesthetic of hand-drawn elements and a huge amount of negative space both give it a simple style that works well for its benefit. Card symbols are easy to read and intuit after a few rounds, although an on-screen guide can help teach you what a particular guide does it you haven’t encountered it before. Strangely, Frost does feature some performance issues for a game that doesn’t look all too demanding. Even on a PS4 Pro, I ran into long segments of slowdown and input delay which aren’t game breaking for a turn-based game that you can take your own pace at, but the random nature of this lag was frustrating, to say the least. In a single match, I could traverse a few steps with lag along the way, have a round or two of perfect performance, and cycle back around between the two all within a single game.

For most games of Frost, your only goal is to travel a set amount of distance. If you’re looking for an additional challenge (adding on a layer to an already difficult ruleset), extra modifiers can be included such as winning a certain number of combat events or holding certain cards in your deck, both of which are randomly chosen when starting up a custom game. Sure, you could always give up and start a new game until you get a challenge set that’s to your liking, but Frost is always about facing an insurmountable challenge that will overtake you more often than not.

To Frost’s detriment, the high level of challenge to each game is the constant timer of impending frost that works against the player. At the end of every turn, the temperature ticks one step closer to zero (and only even maxes out at eight) until the player succumbs to the icy chill of death. Completing a phase and traveling onward will restore one blip to the frost gauge, but outside of a very few select card effects, this is the only way to stay alive. Many locations will require more material cards than you’ll be lucky enough to draw in your hand and it’s not uncommon to freeze to death waiting for the right hand to be drawn. Only one campaign that I’ve seen offers a character that’s immune to the cold and would be a great introduction campaign to try if it didn’t unlock after a few hours of gameplay.

This can’t be understated: Frost’s short turn counter often forces players into unwinnable situations while waiting for the right card combination. Those despair cards can easily clutter up a five-card draw, where the most efficient way to exile them from your deck is by way of Resting for a turn, getting rid of whatever garbage cards you have in your hand but also wasting a turn that could have otherwise been spent using your limited resources towards the objective and trying to stay ahead of the Frost for another round.

If you’re short on the right materials to proceed to the next stage, such as wasting your last piece of wood to purchase a fire card that allows you to draw an extra card, the easiest solution is to use survivors to go out scavenging. Adding these extra cards to your deck is no guarantee of success, as they can return with materials, despair cards, or flat-out die on the return trip. If you aren’t paying much attention to what’s in your deck (the remaining cards are indicated with a Stock counter on lower difficulty levels) and remove all of your survivors, losing the game can come quickly and suddenly. I’ve hit too many bad endings by being unable to draw the cards I need, or simply not having enough of a given resource to pass the checkpoint.

Frost’s chilling weather isn’t the only thing trying to kill you either. Events can randomly show up in each stage and involve some sort of combat challenge. Failure to win that combat will result in taking damage when you travel to the next area. At that point, the player can either sacrifice a survivor to take the hit or opt to take one health point worth of damage. Just like the Frost meter, game over comes as soon as that bar of health drops to zero. There are a few healer and event cards that can help bring the player back up to fighting condition but they often come at a high cost.

More brutal than your standard roguelike, Frost constantly tries to overwhelm the player with turns that look unsolvable at first. Death can come in your first few turns or mere steps away from the goal and, often times, with little the player can do about it. Frost is absurdly difficult but the quick nature of each game means starting up a new round and trying again is part of the ‘fun’. Calling Frost a fun game is quite a challenge with how often you’ll die, but I wouldn’t say that the game itself isn’t enjoyable in a sadistic sort of way. If you’re up for a solitaire challenge where victory is never guaranteed, Frost is an intriguing little card game to look forward to on PlayStation 4. 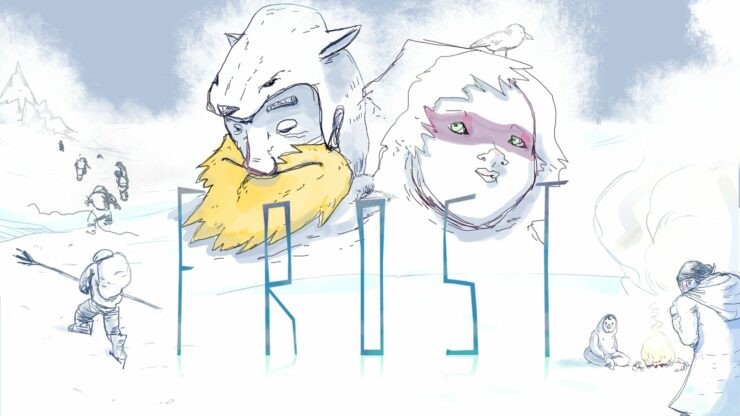 Frost is one of those rare solitaire card games that force the player to consider both moves they're making now and moves ten steps ahead if they're looking to keep treading forward. Unfortunately, there's little room for error and the slightest miscalculation will send the player to an icy grave.