Devolver Digital has a cadre of skilled programmers that come up with a plethora of unique titles but perhaps none in their rogues gallery are as aligned to my own interests as the collaborative efforts of Terri Vellmann, Doseone, Kitty Calis and Jan Willem Njiman. When not working on other fantastic projects like Minit and Sludge Life (okay, that one's just weird), the team banded together to create a game about rooms filled with discs. The aptly named Disc Room takes the concept of one single room filled with discs and manages to create an entire space ship filled with body-carving cutlery.

The year is 2089 and a giant disc has appeared out in the orbit of Jupiter. As just one sole scientist, you're tasked with checking it out first and foremost and making it out alive is only a secondary objective. The player character in Disc Room doesn't fight, can't block the discs, and can barely do more than run around and try to survive from getting carved into a bloody mess. Despite the overwhelming odds, the experience is a fantastic effort that's built upon just checking out rooms filled with murder discs.

Running around is often your best option, and for the first few rooms, is the only option available to new players in Disc Room. Only as you master the ways of staying alive just long enough to unlock the next room does the toolbox gradually open up to the player. Scattered throughout connected map are six powerful upgrades that confer new abilities to the player and serve as the only real upgrade to Disc Room beyond the player's own skills. Each of the abilities has their own strengths in key situations, from being able to quickly dash forward and evade any oncoming discs for a short period of time to a cloning ability that lets you duplicate yourself and let you stay alive through the magic of science (as long as all of your clones don't get carved up at once). These abilities can be freely swapped around before jumping into a room, so there's no reason not to experiment and see what ability works best against the given disc types.

If you're a fan of collecting 'em all, no matter what they are, Disc Room has the perfect solution: find every possible way to kill yourself. Every enemy disc in Disc Room is catalogued and kept in a giant bestiary of floating discs, tracking how many times you've discovered them and fallen prey to their sharp embrace. Even with fully clearing out the many levels to Disc Room and making it through to the end credits, there were still half a dozen discs that eluded me that must be part of some greater puzzle at play. There are also a few golden rooms that offer secret objectives that will certainly tickle that part of your brain that enjoys discovering 'Eureka!' moments.

The overworld to Disc Room's multitude of murder dens consists of a greater map that's slowly expanded and unlocked as you open up new pathways. As you progress into the inner depths, different biomes will appear and offer up a different selection of enemy discs that require different approaches to playstyle. The rooms themselves are also just as much an enemy, as players will often have to change their tactics depending on the region they're in. The single most obnoxious room sets are encountered in the latter half of the journey and consist of darkened red rooms that have a nasty tendency to dim the lights for a period of time (or in one specific room, play in complete darkness). However, the discs themselves never stop moving so it's a simple game of anticipation and hoping that another rogue disc doesn't spawn in during those twenty or so seconds that you're aiming to stay alive.

Disc Room is an experience that's just as much about dying as it is, well, not dying. Each room on your path through the derelict vessel is locked away beyond minor objectives. Often times this is simply trying to survive for ten or twenty seconds but there are times when the game wants you to die. Part of the full Disc Room experience lies in dying to every manner of rotating trap you can. These will often be quite obvious but there will be rooms that hide secret discs that take a little coaxing to discover. For example, most bosses have a secret second form when they're near death that serve as a sort of consolation prize for dying moments from the finish line. What do you get when you complete your bestiary of implements of death? Well, that's a surprise the developers want to keep hidden for players to discover for themselves.

If your skills at anticipating and evading curtains of enemy bullet fire are about as non-existent as mine, Disc Room might pose an insurmountable challenge. However, the developers anticipated players of all skill levels wanting to jump into Disc Room and have a number of sliders that can change the experience, from overall speed of the game to how quickly and dangerously the enemy discs can move. Each adjustment is tracked with its own progression, so if you're playing through the game at 100% base speed for the entire time and get stuck on one specific room and try to knock the speed down to get past, the game will track that single room completion on a different tracker. I can understand the developers not wanting to reward players that take an occasional shortcut but there were two rooms in particular that I couldn't manage to achieve the requisite survival time, no matter how hard I try (one of them is Lobotomy, which you can check out my most recent attempts at in the video below).

For a game with just one singular objective, Disc Room really needs no explanation whether or not you're going to like the few hours you may or may not plan on spending dying and retrying. As a fan of self-improvement through trial and error, Disc Room scratched that itch like no other game has done since my first baptism in Demon's Souls. Perseverance and a lucky pattern might be all you need to survive for a few moments longer in Disc Room; the only limit is your own ability. 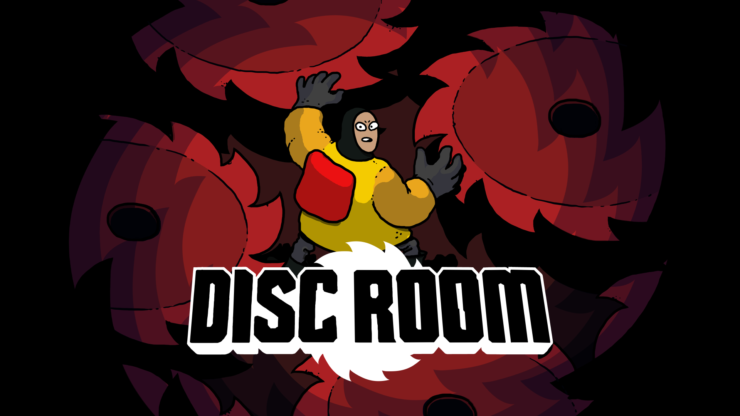 Disc Room is an outrageous experience built around one single philosophy: getting cut in half by spinning discs. However, the challenges for surviving as long as possible and grazing past enemy attacks satisfies a craving that only the most polished of Japanese shmups could satisfy.