Mashing together card games and role-playing games has become a rather common genre in recent years, both in terms of video games and their offline tabletop brethren. Rarely do you see the two mingle more than offering up a player’s abilities and powers from a deck of cards or perhaps an innovative dungeon master using a deck to pull his next encounter or treasure for the adventuring party. More often than not, when I hear that a role-playing game offers card mechanics, I discover that it’s typically just a way to present your combat abilities on a unique UI. That’s not the case with Voice of Cards: The Isle Dragon Roars. Yoko Taro’s latest experimental title lays it all out on the table with each encounter based solely upon the cards that lay before you while a GM narrator guides your path.

The adventure in Voice of Cards: The Isle Dragon Roars (which given the subtitle hints that this may become a mere campaign in a greater series of adventures) opens with a call to action by the Queen of the realm: a suitable bounty for anyone that captures a (as in only) dragon that’s wreaking havoc across the island nation. The Queen’s elite adventuring party, The Ivory Guard, are the first called to action and seem to have the best odds of taking down the dragon given their current power, briefly teased in a prologue encounter to recover some all-important stomach medicine from a monster-infested dungeon. That’s where the player comes in, alongside a monster companion known as Mar, seeking all of those treasures for himself. Each character that joins alongside the player to form their adventuring troupe has their own reasons for tagging along, most involving seeking revenge on the dragon in one form or another. While your band can only bring three of you to the table when it comes time to do battle, a total of five characters will make up the final dragon-hunting party.

All laid out on an ornate wooden table before you are cards, each representing a key piece of the setting or character in the adventure. Rather than pixels and tiles, each square of forest, each Inn or Armorer are all represented with their respective cards and laid out like a makeshift map as you move your piece around the table. Fog of war limits views of the table until you approach the nearest card, slowly flipping over each card to reveal the greater path ahead. Every action you take, from entering the menu, engaging in combat, to managing your inventory are all done with the cards laid before you. Overall, I genuinely appreciated the presentation and made the adventure feel as though it were taking place on my dining room table all the while an invisible GM voices out in live narration.

When it comes time to do battle, an action that easily takes up roughly half of Voice of Cards’ playtime, the GM brings out another table specifically for combat and lays out your squad of three heroes, up to three enemy cards, and a set of dice and spell tokens necessary for many actions. Contrary to what one might think a card-based combat system might entail, there’s no random drawing of abilities to make up each turn. As your heroes level up, they gain specific abilities which are later slotted in to make up their ability roster of four abilities (plus an option to pass or use consumable items). These abilities range in cost from zero tokens up to four depending on their balance in combat. Each time a character takes action, one more token is added to the pool until it's sacrificed in cost to activate a spell or combat ability.

Knowing how to plan ahead and conserve tokens for a heal or stronger attack are critical to the flow of combat, especially in the last few chapters of Voice of Cards. Later on, your spellcasting companion Melanie discovers an ability to generate two tokens on her turn and I immediately swapped that in for her basic attack which became the single most crucial ability on my team. Those extra tokens constantly allowed my main character to unleash a Light-elemental attack against every foe on the board or unleash a last-minute heal to save a teammate from expiring. Players will quickly discover their own synergy between teammates to craft the perfect strategy.

Elementally-aligned attacks also play a major role in combat and knowing what abilities are weak against one element or resist another will help speed up the flow of combat greatly. Over time, your own characters will unlock passive abilities to resist certain elements, so if you know that the boss you’re facing is fire-focused, it’s handy to know which characters you’ve unlocked that passive resistance for (or at least equip a Firestay ring to mitigate the damages).

Combat is very straightforward and honest when it comes to its presentation. Character stats are presented on the cards and are mostly limited to Health, Attack, and Defense. There’s a secondary Speed stat although that’s mostly for determining turn order. Barring any elemental effects, one character’s Attack stat is matched against the opponent’s Defense stat. Subtracting the difference gives you the attack’s given strength, although there seems to be a hidden dice roll for the player’s side that usually gives their attacks a little more oomph. Some actions will also include a dice roll of some sort, typically either to increase damage by the number shown or to inflict a status effect. Running away from combat similarly uses two dice to predict your roll; once you’re high enough level, trying to run from an encounter merely requires a roll of 2 or greater, an impossible feat to mess up with two 6-sided dice.

Given that Voice of Cards: The Isle Dragon Roars features Yoko Taro working together again with Keiichi Okabe, fans would be eager to know if there’s any connection to the Drakengard and NieR series. I could easily say Yes and leave it at that, but to be honest, the main connections that players will make between Yoko Taro’s previous works and what’s laid out on the table comes by way of extra DLC. If you pick up the NieR bundle, it includes costumes for the three primary protagonists (the hero, Melanie, and Mar) based upon NieR Replicant’s recent designs as well as a number of cosmetics for both cards and table based upon Grimoire Weiss and Emil. There’s also an additional soundtrack option to swap much of the soundtrack for Devola’s Music, again linking Keiichi Okabe’s previous works on NieR together with Voice of Cards. As for the actual story and narration, Voice of Cards: The Isle Dragon Roars remains very much its own universe beyond the bundled cosmetics.

Of course, with the savant-like Yoko Taro working on the story, there’s quite a bit to this fairy tale adventure that doesn’t fall into the archetypical black and white, good versus evil mindset. Each village that the adventuring party stops by has its own views upon the dragon at large and little by little, the cards reveal motivations and revelations involving every player on the board. Perhaps the most straightforward character in all of Voice of Cards is Bruno, a muscle-headed son of a medical doctor who simply wants to travel the world and discover new supplements. His simple nature and eagerness to share his protein supplements with the adventuring party make him an enjoyable cast member that grew on me the longer I adventured by his side.

With a runtime averaging around twenty hours (with much of it being padded due to the high encounter rate and sluggish rate of combat), Voice of Cards: The Isle Dragon Roars is a fine value at $30. Square-Enix has been on an experimental kick lately, between this, Dungeon Encounters, and the upcoming Triangle Strategy, and I’m always eager to see how the Japanese role-playing genre can evolve with creative minds like Yoko Taro upping the ante. Voice of Cards: The Isle Dragon Roars is an easily accessible JRPG that’s easy to pick up and play along for anyone that’s ever enjoyed a night of tabletop gaming with friends. 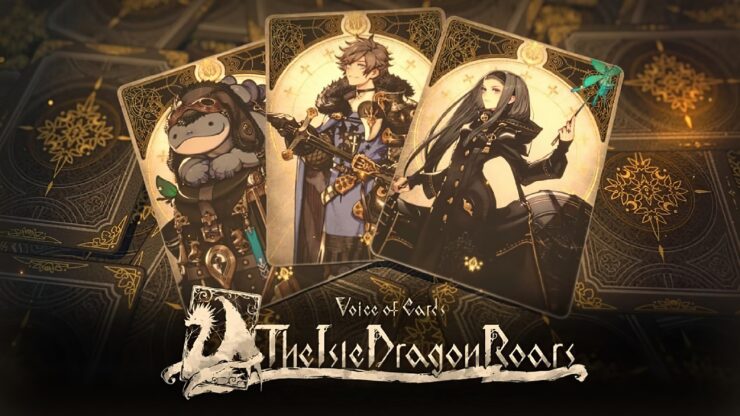 Yoko Taro's storytelling is laid out on the table in a card-based adventure that'll appeal to tabletop and JRPG fans alike in Voice of Cards.