It's been over a year and a half since the launch of For Honor, Ubisoft's unique third-person, objective based fighting game, and while a few things have changed, many others have stayed the same. For Honor though has persisted despite it all with seasons of online brawling to be had for players, and more characters and content being released for the most die-hard fans.

So, jumping into the game a year and a half later to experience the latest DLC pack, Marching Fire, I wasn't sure what to expect. Many games in that timeframe can essentially have a complete change, while others stagnate and fester. So which is it, is returning to For Honor like visiting a senile war veteran, or is training with a hardened military drill sergeant? Well, it's somewhere between the two.

For Honor, first and foremost, is pretty much the same game I reviewed when it first released. It's essentially an objective based fighting game, with a three-way stance system that players use to defend, attack and strategize moment-to-moment. I was hesitant to jump back into the game after so long away from it, but it's still pretty immediately gratifying and rewarding. Blocking moves at the last moment and getting tiny hits in on your enemy before they can defend themselves feels good.

It feels equally good to guard break, plunge enemies off of ledges, chase after opponents with your team, and even run for your own hide when outnumbered. It constantly feels like there's something you can do, something to help the team, and when you come across an enemy, it's suddenly game time, round one, fight.

Just like at launch, it's still frustrating to end up with AI teammates or have two enemies gang up on you, but it also feels like there are ways to get away or fight back to a degree. For Honor doesn't feel unfair and overwhelming, more tough but fair, which is more than can be said for many online games. The new stages are nice and of course bring a fresh coat of paint to the experience, but broadly, it is the same game I stepped away from over a year ago.

But now the Marching Fire DLC has released, giving For Honor its biggest refresh yet. A brand new online game mode, four brand new characters, an Arcade mode, and a bunch of smaller new items and adjustments to appeal to hardcore fans. It's a good bundle of brand new content, but of course the question is, how is it going to change how you play the game?

Let's start with Breach, the brand new online game mode that's arguably the star of Marching Fire. Here one team defends a castle, while the other team pushes a battering ram up a central path while being bombarded by arrows and enemy troops, all to get the battering ram in position and break through to a central area.

It's a long game mode. You can find yourself in a Breach match for up to 30 minutes, fighting the mob enemies that'll be flocking your battering ram, or killing off archers and AI enemy commanders. You can lose yourself in the game mode, fighting AI enemies and fulfilling small objectives to get the battering ram pushed to the goal. Of course, once you come up against a member of the enemy team, things return to what you expect from For Honor; a more intense, one on one battle with only one winner.

Honestly, there were moments where I took down enemies and had their slowly respawning corpses laid out next to my slowly progressing battering ram, and it felt good. But I never wanted to keep playing Breach. Once a game was over, it was a relief. I almost always wanted to bow out halfway through, regardless of whether winning or losing, because it was just such a time intensive task. Other players clearly feel the same way, since they tend to abandon the game if they see they're losing after ten minutes.

Breach is an incredibly strong game mode, definitely one of the strongest that For Honor has right now, but they could certainly do a lot to speed it up. Shorter respawn times and a quicker movement pace to the battering ram, perhaps.

Arcade mode is an interesting one, but I'm not sure who it's for. In Arcade mode you can go through several battles with slightly random modifiers applied to each. Your character might have better damage or a health absorption ability, while enemies might have bleed or fire effects applied that you'll have to be wary of. Moving through each of these battles, you slowly work your way to the end to earn yourself some new gear, with the gear available to you being better depending on your gear level, and which tier of Arcade mode you take on.

Arcade is decent. It gives you bite sized chunks of battles in a variety of challenges, and you can test out your abilities and characters in a relatively stress-free environment. It's great for getting to grips with the game, and for me, great to play to remind myself how best to play For Honor. But if I were a player who'd been regularly playing For Honor all of this time, I'd be wondering what the point is, frankly.

Honestly, for the purposes of getting used to playing For Honor, and even for getting used to playing some of the brand new characters launched with the Marching Fire DLC, the Arcade mode is pretty great. But it feels like such a minor addition. This feels like something that should be added as part of a free update or something, but as a major feature in a new DLC pack? Well, frankly, it just doesn't feel worth paying for in any way.

But, having said that, you put all of the content found in the Marching Fire DLC pack together, and you can't deny that it's a strong package. But not one for casual players. It's being sold at a price point which is, frankly, only going to be worthwhile for the most hardcore of players that will get their money's worth from it.

It would make a great point to jump in for new players, though. The Arcade mode would give new players a great place to hone their skills before testing them online - especially since the Story mode kind of stinks - and the new characters are going to have the entire community testing their abilities and what makes them good for the meta going forward. Marching Fire is a brilliant place to jump in, only it doesn't seem to be marketed that way.

If Marching Fire's Arcade mode launched as a free piece of standalone content, designed to persuade players into buying the full game, I could see it being a great success. But as a high priced piece of DLC for a game that many people will have forgotten about or moved on from, it's a tough sell. As much as I personally like For Honor and the content in Marching Fire, I feel I would struggle to convince friends to pick it up and put as much time into it as I have.

Reviewed on PlayStation 4 (code provided by the publisher). You can purchase the full game + DLC via Amazon. 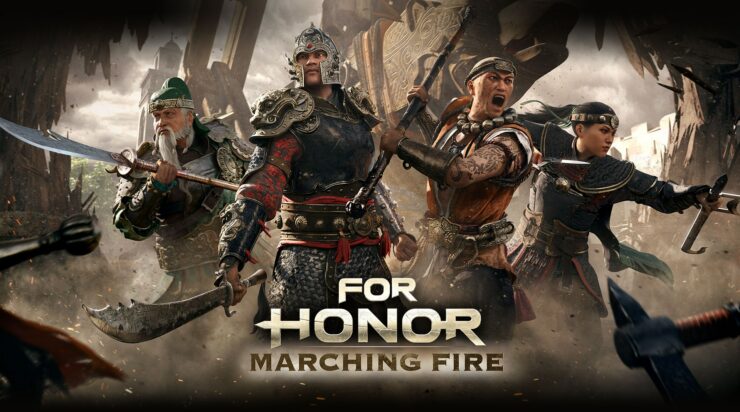 Marching Fire is For Honor's biggest update yet, and it's a doozy. Arcade mode, Breach and the new characters all add loads of content for For Honor fans to enjoy, but if you're out of the loop with the game, this doesn't do much to persuade you to start playing now.