The world has ended, I’m with my buddies and I’ve got a pistol with infinite ammo, I’d say this was Left 4 Dead but something is a bit different. The zombies are little more hunched, a little more grey and a little less human. In fact, they’re not human at all.

In what might be the most depressing news ever, Left 4 Dead is a decade old this year. Luckily, Holospark feel the same way and have thus created Earthfall. With four characters to choose from, one of which is a woman, teams must dash through a variety of locations fighting back mobs and special enemies. Objectives force the players to defend locations or push forward, and there’s always a couple of environmental hazards that can be used and exploited.

If this sounds familiar, good. Earthfall is a rather unsubtle homage to Left4Dead, from its enemies to its weaponry and feel. In fact, the only the thing that does feel slightly different is the distinct lack of amusing and depressing graffiti at the start of every level. Replacing the traditional zombies with a variety of monstrous extra-terrestrials is the biggest noticeable change, but playing Earthfall feels almost exactly the same regardless of that. The standard drones and dumb mobs swarm players when they feel like it, while certain special specimens pose a bigger threat. Whiplashes pick up unlucky humans by the head before dashing into the sunset like the lowest budget remake of The Shape of Water, whereas Threshers just pounce and crawl. Sappers, despite their name, are the blotters of Earthfall, and Enragers are gross flesh balloons filled with enemy buffs. Beasts and Blackouts, unsurprisingly given their name, serve as the hardest, tank-like enemies.

Missions begin with players scavenging weapons while mostly idle mobs wander about. By the end of each level you’ll undoubtedly be wounded, panicked and swarmed by more aliens than you can count, and the mounting tension when things start going wrong is delightfully palpable. Earthfall is at its best when things unravel because mowing down hordes of dumb aliens might be entertaining at first, but the real thrill comes from just about surviving. Crawling over the finish line with next to no health and one less teammate than when you started feels like a hard-fought victory and worthy of celebration.

Unfortunately, it isn’t always the case though. As the enemies are random, levels can be extremely easy or difficult depending on your luck, making combat an unpredictable mixed bag. Some levels had my group stuck for hours only to breeze through the final encounter due to certain enemies not spawning that time. Other levels had unbeatable mobs spawn within a minute of the game starting. While this can be frustrating, especially as levels can be about an hour long with no checkpoints, it also adds to the tension of never knowing what to expect, and never feeling fully prepared.

Ammo and supplies are permanently in short supply, but the guns themselves are never hard to come by. With 3D printers dotted around each map, able to equip entire teams, Earthfall is more about adapting to your nearest weapon than sticking with a favorite. Weirdly, Earthfall also features rudimentary building mechanics, but rarely presents an opportunity to use them. You can use certain items to build defenses but for the most part remaining mobile is the best course of action.

It’s a shame there isn’t a competitive mode. Left 4 Dead was made all the more popular due to its score based versus mode that saw teams swap between playing as humans and the zombies themselves. But Earthfall's levels and campaigns are much longer, so removing that component is understandable if a little disappointing. Earthfall's biggest issue is its story or lack thereof, though. While you can find an entire codex of information on the main menu, there is next to nothing in the game itself. Levels feel disconnected and the brief dialogue mentions characters we don’t know doing things we don’t understand. It would have been nicer to connect these dots better and have the players more engaged in the story, especially without a competitive edge.

But Holospark obviously decided that Earthfall was first and foremost about shooting aliens, and funneled their attention there. And I can’t say that was the wrong decision. The moment-to-moment combat feels good and the way players grow more desperate as the levels drag on is great. Each weapon feels and sounds powerful and the aliens' hordes unforgiving. Earthfall is a clever game that makes you think it wants you to lose, making victory all the more satisfying. While the bots might not be any smarter then they were a decade ago, spending an afternoon playing with some friends is fun, frantic and undeniably entertaining.

Reviewed on PC (code provided by the publisher). You can purchase the game for PC via Steam, for PlayStation 4 and Xbox One via Amazon. 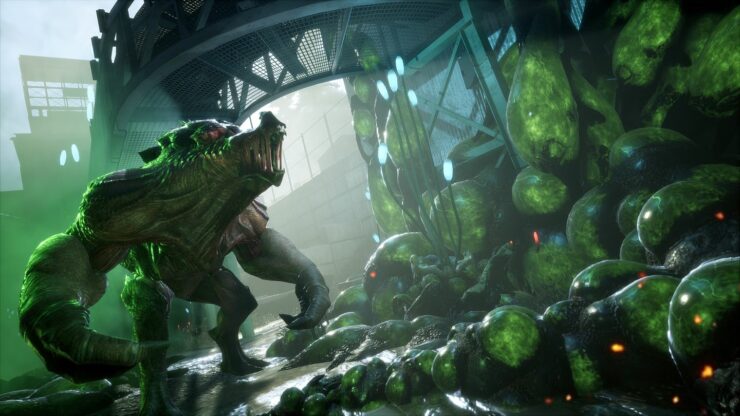 There might have been plenty of co-op shooters since Left 4 Dead, but few managed to wrangle the same fun, fear and frantic combat as Earthfall did.