Earth Defense Force: Iron Rain is the first title in the series to be co-developed by a famous developer known as Yukes but also developed solely for the current generation of Sony hardware. Despite the change to a new engine and a new team crafting together a non-numbered Earth Defense Force title, having Okajima helm the project has helped Iron Rain retain that signature EDF feel. Blasting hordes of alien invaders and vicious giant insects have never looked so good on the PlayStation 4 and the change in the engine should only be noticed by the most astute of soldiers. 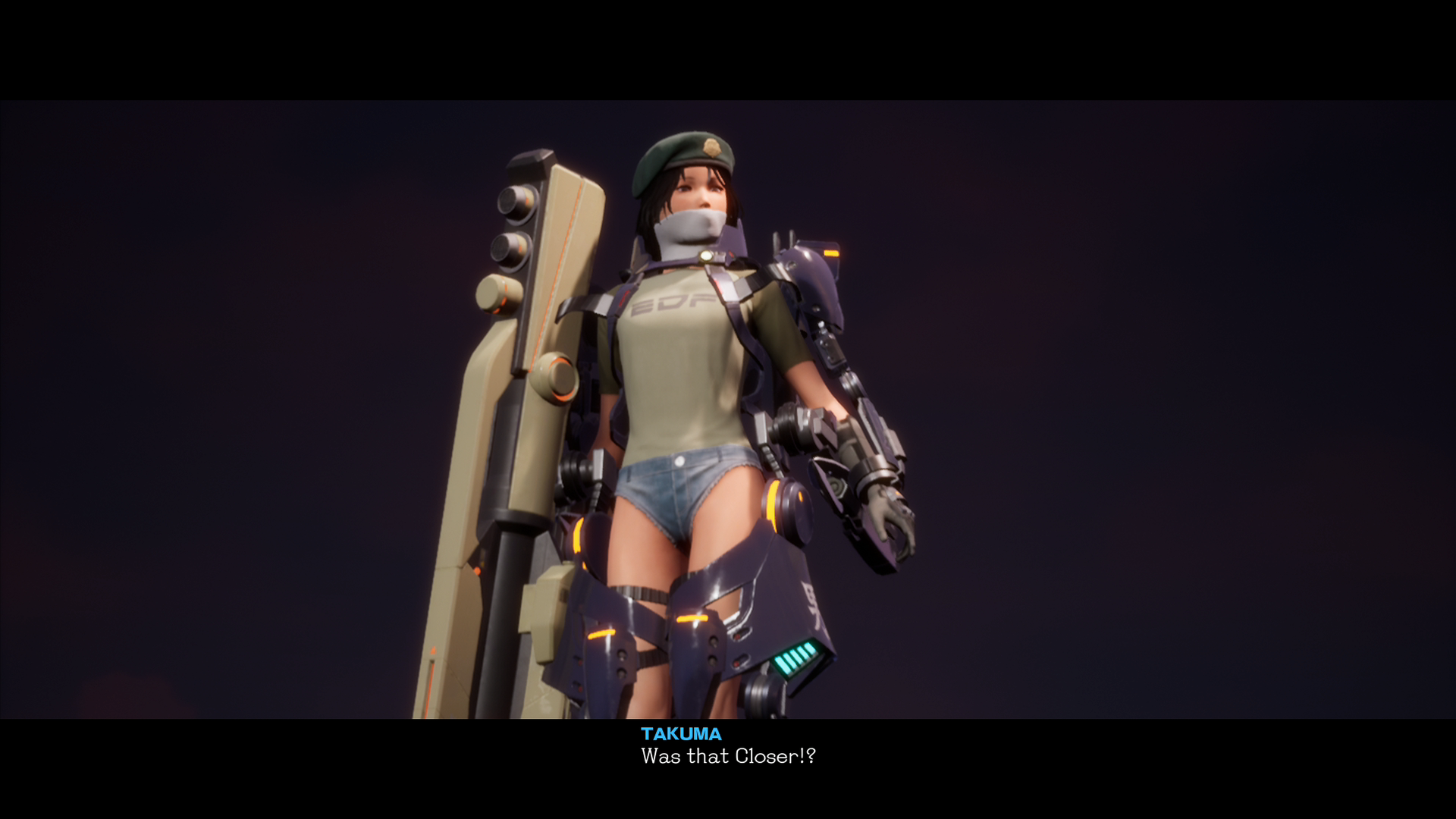 Most players won't need a reason to go blow up giant insects, but if you needed some motivation, there is a small bit of story to get you going. As Closer, a hero that once faced off against a giant alien mothership known as the Hivecraft some seven years ago, you're the hero that the EDF needs. Blessed with a unique energy core that can allow you to go into Overdrive, the alien menace won't stand a chance. Joining Closer are a number of other EDF squadmates that bring a bit of life into the story that's traditionally just been about big monsters of the week. There's a small amount of drama and intrigue being told over the comms before and during each mission that helps to spice up the story which is certainly better than its predecessors.

While Earth Defense Force: Iron Rain hosts a mission count roughly half of its numbered brethren, the mission diversity remains on par with veteran EDF soldiers are used to. Battles in abandoned urban cityscapes, sprawling underground cave networks, and EDF base defense missions are all just part of a regular EDF deployment. The variety of enemy types is what makes each mission in Iron Rain feel unique to one another. Sometimes you’ll face off against giant bomb beetles, in other missions, giant robots, and silver ants. While not nearly as essential on lower difficulties, once you branch out into the Hardest or Disaster difficulty levels, bringing the proper loadout can be the only way to survive. Each type of enemy offers its own strengths and weaknesses to damage that a veteran EDF member will need to be aware of. While a silver ant might resist your energy railgun, the same weapon is probably one of the most powerful methods to take out a giant robot from range. 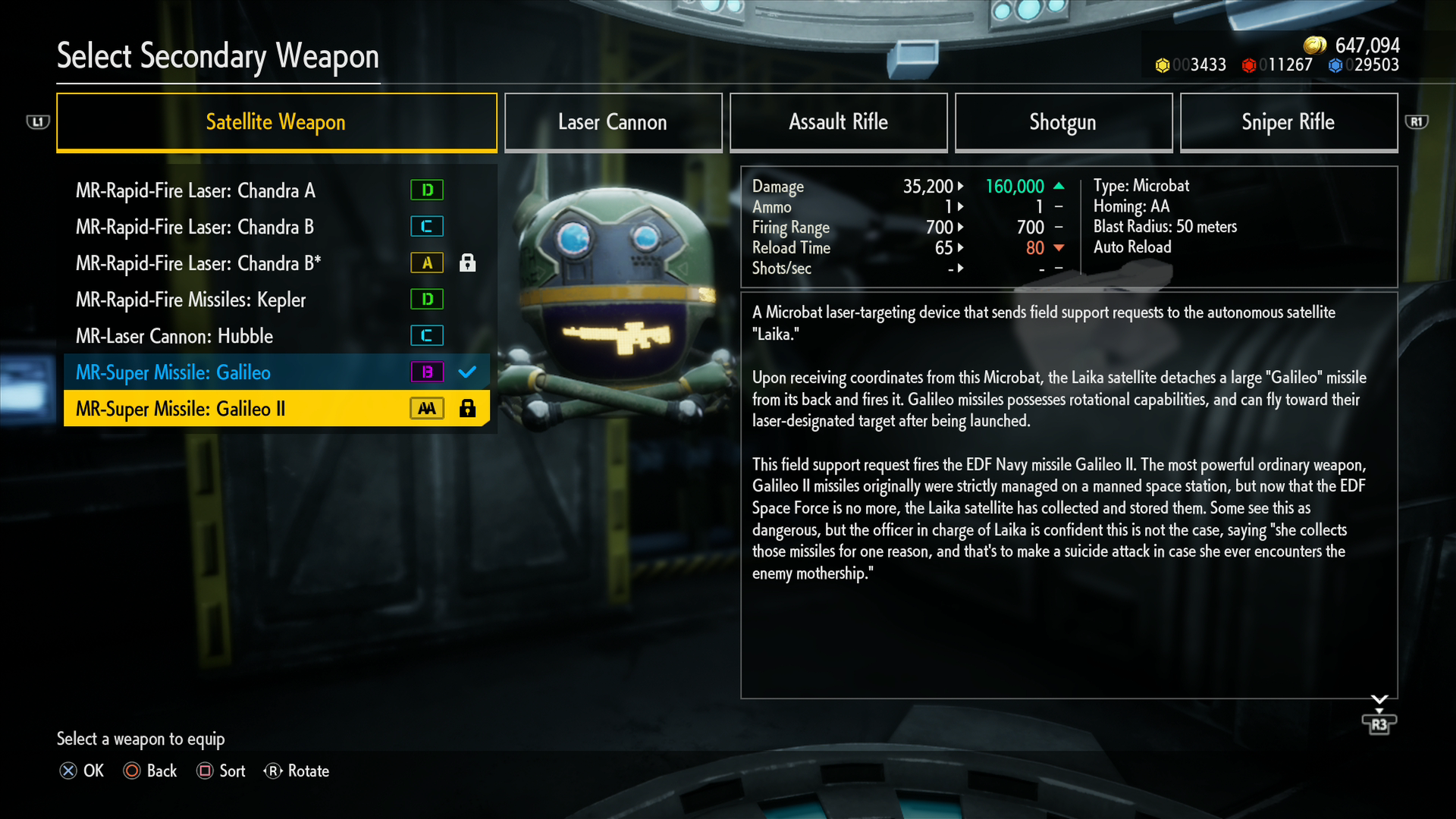 Earth Defense Force has always been about having an obscene variety of weapons to wield into battle and Iron Rain is clearly no exception. Numbering in the three-hundreds, the weapons that an EDF soldier is licensed to use has a great variety in types and effectiveness. Players have their choices between traditional EDF weapons like assault rifles and shotguns before branching out into much more specialized equipment like orbital satellite weapons, sustained-fire energy cannons, and a relatively new addition to EDF troops, swords. Each weapon is graded on a tier list from E-AA with the higher rank weapons obviously dealing more damage but also having more unique effects to the attack. Most every weapon an EDF soldier wields will have some form of infinite ammo but have to reload or recharge over time. However, some of the most powerful weapons in the arsenal can only be fired a select number of times per mission. If you’re facing off a giant hivecraft or something where you know there’s a giant boss at the end, it might not be a bad idea to bring along that sniper rifle that offers a single shot but deals more than fifty-thousand damage.

In a drastic change from traditional Earth Defense Force, weapons are no longer dropped arbitrarily alongside armor kits by enemies you defeat. Instead, the license to purchase weapons will be doled out after missions depending on difficulty and near as I can tell by your performance rating. Each mission offers a couple of weapons to earn, and while you might not always unlock a new piece of equipment after a mission, those that join the mission with you also earn new gear licenses. However, you may receive more or less equipment than your partner depending on your personal performance. While the time and energy gems are shared between all six players in co-op, the amount of damage you take and your technical score both affect the rating grade and thus the number of equipment licenses you’ll unlock. Massive explosions that take out an entire hive of ants while in Overdrive mode does wonders to boost that score. 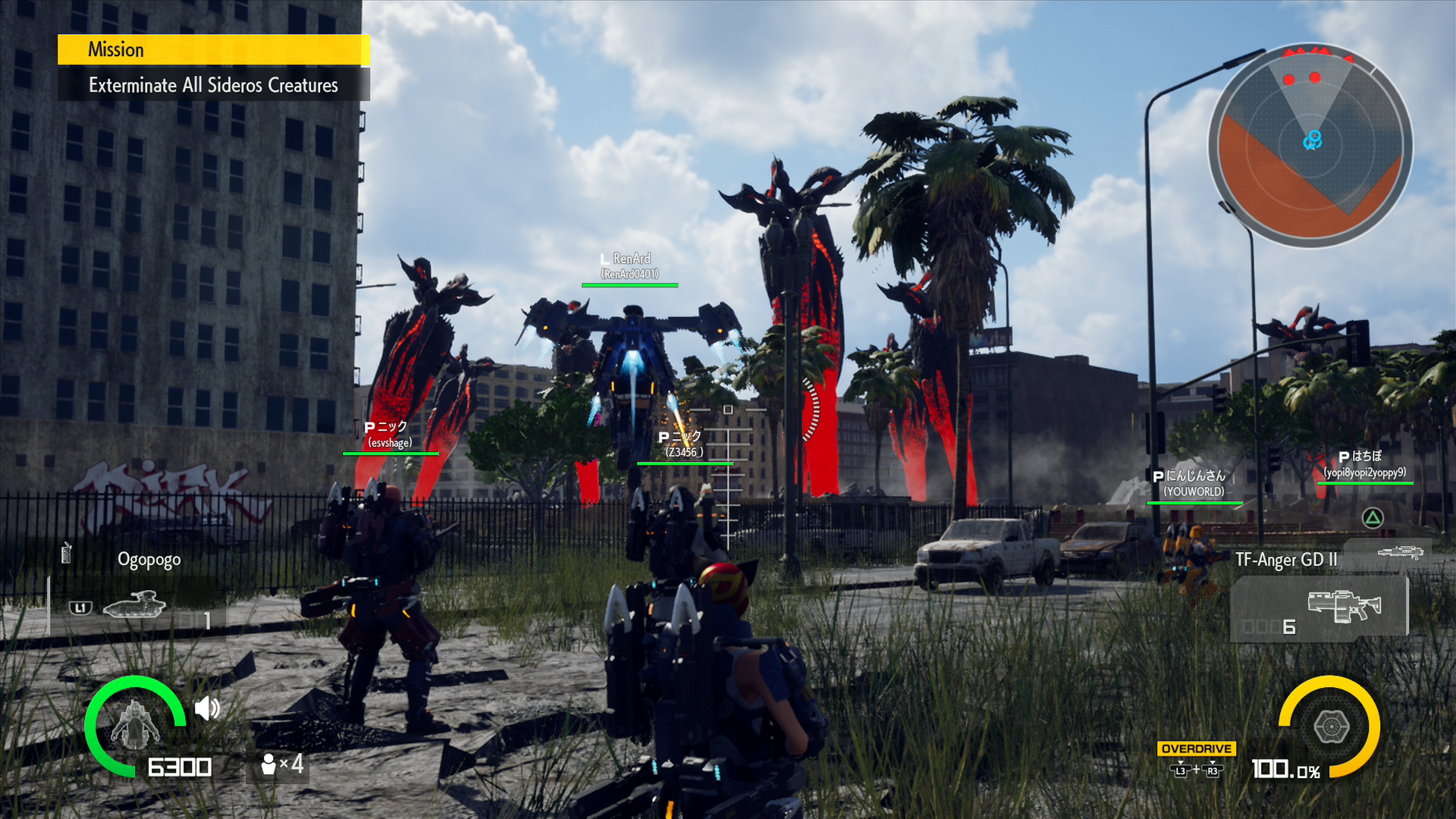 Earth Defense Force has traditionally held a number of diverse classes and Iron Rain is no exception. Among the four core classes (marked by the type of P-Gear that they wear) that players will unlock throughout the campaign (including a fifth extra class that’s earned by finishing the campaign for the first time) are roles that no longer fit into the Fencer or Wing Diver archetypes. Instead, those P-Gear bodysuits change the mobility and evasive options to each class. If you still want to fly around the map, the Jet Lifter gear can allow you to fly in small bursts. For those that want to be a frontline attacker, the Heavy Striker dual-wields any weapon type and offers an energy shield to block all incoming attacks from the front. The traditional soldier archetype is the Trooper, boasting the highest item capacity of all the classes and a short dodge roll for evasion. Lastly, the newest class and my personal favorite is the Prowl Rider that allows players to take an Attack on Titan approach to zipping around the map via a special needle-like grappling hook. The Prowl Rider also hosts the ability to bring in a giant insect to battle and ride it around like a temporary vehicle in a super ability known as Overdrive.

Overdrive is another new mechanic developed for Earth Defense Force: Iron Rain and turns your particular soldier into a one-man army if but for a short time once per map (twice if you bring along a certain item). During that time, you move faster, fire faster, and reload faster along with having infinite energy for your class’ special movement ability. Unfortunately, you aren’t immune to damage during this time and accidentally blowing yourself up with a stray grenade or being stepped on by a giant creature can take you out of the fight quite easily. 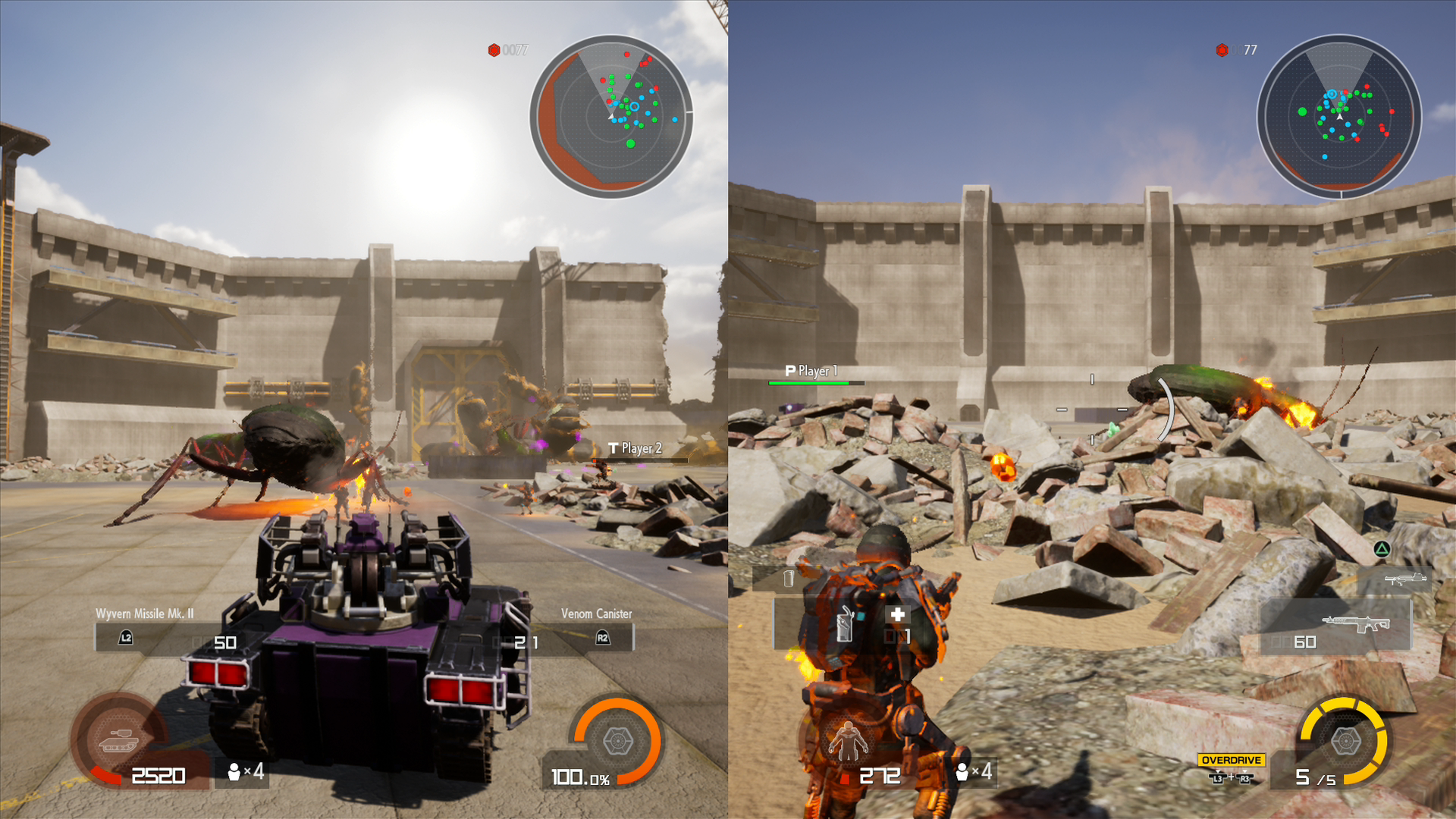 When you get tired of the six-player online co-op (which includes two-player split screen as well), the new Mercenary competitive multiplayer pits two teams of up to four soldiers against one another to blast giant bugs and bank up the precious energy gems in a first-to-three-sets rush. Every player starts with the same health and weapon pools and by either being granted handicap upgrades upon death or collecting green item boxes can upgrade their arsenal into the truly special weapons that EDF is known for. It’s not a mode that I would ever take seriously, but being able to try out a competitive shooter with the EDF weapon set is a pretty amusing diversion if nothing else.

Iron Rain holds the title for certainly being the best looking Earth Defense Title to date. What was once a budget title on the PS2 has grown into an AA-grade action game that certainly looks better than the numbered series that inspired it. It’s a different take on progression and mission variety, but there’s the groundwork for what could be a great second EDF series for players to sink a couple of hundred hours into.

Earth Defense Force: Iron Rain is certainly the prettiest insect-splatting simulation to grace the PlayStation 4 and there are a number of innovations to appeal to a Western audience, but Iron Rain still falls into that campy B-movie aesthetic.