I can never truly talk badly of a traditional Musou game. I know, I'm a critic, and I have no nostalgia or reasons to hold the series in high regard. I just can't help but respect a game series that is so very consistent. The Warriors series, and of course the flagship franchise Dynasty Warriors, sets out to do a single, simple thing. Retell history as if absurdly powered anime soldiers were on the front lines. Which has got to be one of the purest video game concepts in existence.

So, if you've somehow managed to avoid the Warriors games all this time, you should know Dynasty Warriors 8: Xtreme Legends Definitive Edition has just landed on the Nintendo Switch (and Windows 10 PC), bringing with it all of the series' staples. Here you'll pick up an exaggerated warrior from history, and using their abilities you will literally send enemies flying across stages, carrying them with the swipes of your arsenal, and wrecking opposing dynasties in order to further your cause.

Dynasty Warriors 8: Xtreme Legends Definitive Edition a simple button bashing experience for the most part, with some small nuances you can quickly learn. For example, comboing enemies is a simple act of pressing two buttons, with a third thrown in for when you want a large super move. That's simple enough, but some enemies will be resistant to your hits, making it important to equip a varied set of weapons each time you head into battle, so you always have something that can counter opponents.

Stages are large and filled with potentially thousands of fodder enemies you can slash through, though what you'll actually be doing in each stage is more along the lines of finding unit captains and stronger enemies to destroy, with fodder enemies often just getting caught up in the ensuing chaos. Although those measly foes won't satisfy your bloodlust, they certainly do add up to the overall KO count each mission, and seeing the number grow is always satisfying.

It all comes together to make for an interesting and exciting mission structure that keeps me coming back for more, but there's definitely a key problem here in Dynasty Warriors 8: Xtreme Legends Definitive Edition. That problem is, quite simply, these missions are too long considering you rarely do anything other than mash away at two buttons. Sure, missions and goals will call you to places on the map - protect this unit, attack this unit, defeat this enemy - but you'll get there and you'll still just be mashing away at two buttons to deal damage. This almost always gets tiresome at the end of a mission and makes it difficult to push through more than one mission at a time. Though, the ease and simplicity of picking up and putting down the Nintendo Switch alleviates this somewhat.

The Nintendo Switch is a great platform for Warriors games, too. For the longest time Warriors titles have been appearing on handheld systems such as the Nintendo 3DS and Vita, but only on Switch do we have a handheld system capable of displaying plenty of enemies at a time: an essential staple of the franchise.

You get multiple storylines to play through, each following a historically inaccurate character, with a few story details which may actually be historically accurate. Though you shouldn't take the exaggerated anime antics at face value, playing through the Dynasty Warriors and Samurai Warriors games in the past has taught me tidbits of Chinese and Japanese history, and if you're willing to double check which bits are even halfway accurate, you could learn some interesting and factual bits of history. Education and historical accuracy are certainly not what the Dynasty Warriors games are about, but it's always fun to see history unfold in video games.

Dynasty Warriors 8: Xtreme Legends Definitive Edition is a game that's exciting, interesting, and wholly repetitive - just like almost every other Warriors game. It's such a shame that I'm making this complaint, but it's true. It's a game series I always play for hours on end, enjoying my time, but painfully aware of the repetition. Local multiplayer eases the repetition here, as it does in all Warriors titles, but you're unlikely to keep playing for that much longer, even with a friend.

Reviewed on Nintendo Switch (code provided by the publisher). You can purchase the game for Windows 10 PC via Microsoft Store. 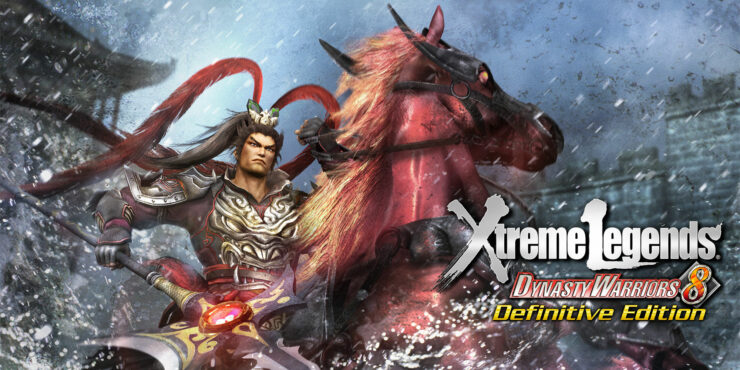 This is a game with genuinely days upon days worth of missions, challenges, objectives, characters and things to collect. It's not content light by any means - though it also doesn't change up at any point during its entire playtime. This is a pretty great Dynasty Warriors game, and Warriors fans will find hours of fun, but I'm not sure that more casual fans of action games will find it as endearing.

The Big Dynasty Warriors 9 Interview – 100+ Hours To Clear All Stories; Getting Across The Whole Map Takes 2 Hours