The Dragon Quest series is the quintessential Japanese role-playing game series. Over the course of the years, the series hasn't changed much, not counting the MMORPG Dragon Quest X, and this has never bothered fans: they know what to expect out of it, and they love it precisely for these elements that haven't changed much, such as the classic turn-based battle system, the character design handled by Dragon Ball's creator Akira Toriyama, the soundtrack and so on.

Even though the main series hasn't changed much, we have seen some sort of innovation in Dragon Quest thanks to a few spin-off titles. The Dragon Quest Heroes games brought more action into the series, while Dragon Quest Builders offered a unique take on the series, adding crafting and building gameplay elements on top of a basic action RPG formula. Dragon Quest Builders 2 is built on the foundation of the already solid first game, offering an experience that's incredibly engaging for both RPG and sandbox games.

The story of Dragon Quest Builders 2 is set some time after the end of Dragon Quest 2. The descendants of Erdrick have defeated Hargon, and the world has known peace for some time. Unfortunately, the battle against the lord of destruction is far from over. The Children of Hargon now seek to avenge their lord and manage to enslave humanity by getting rid of all the builders while destroying everything that has been created by them. 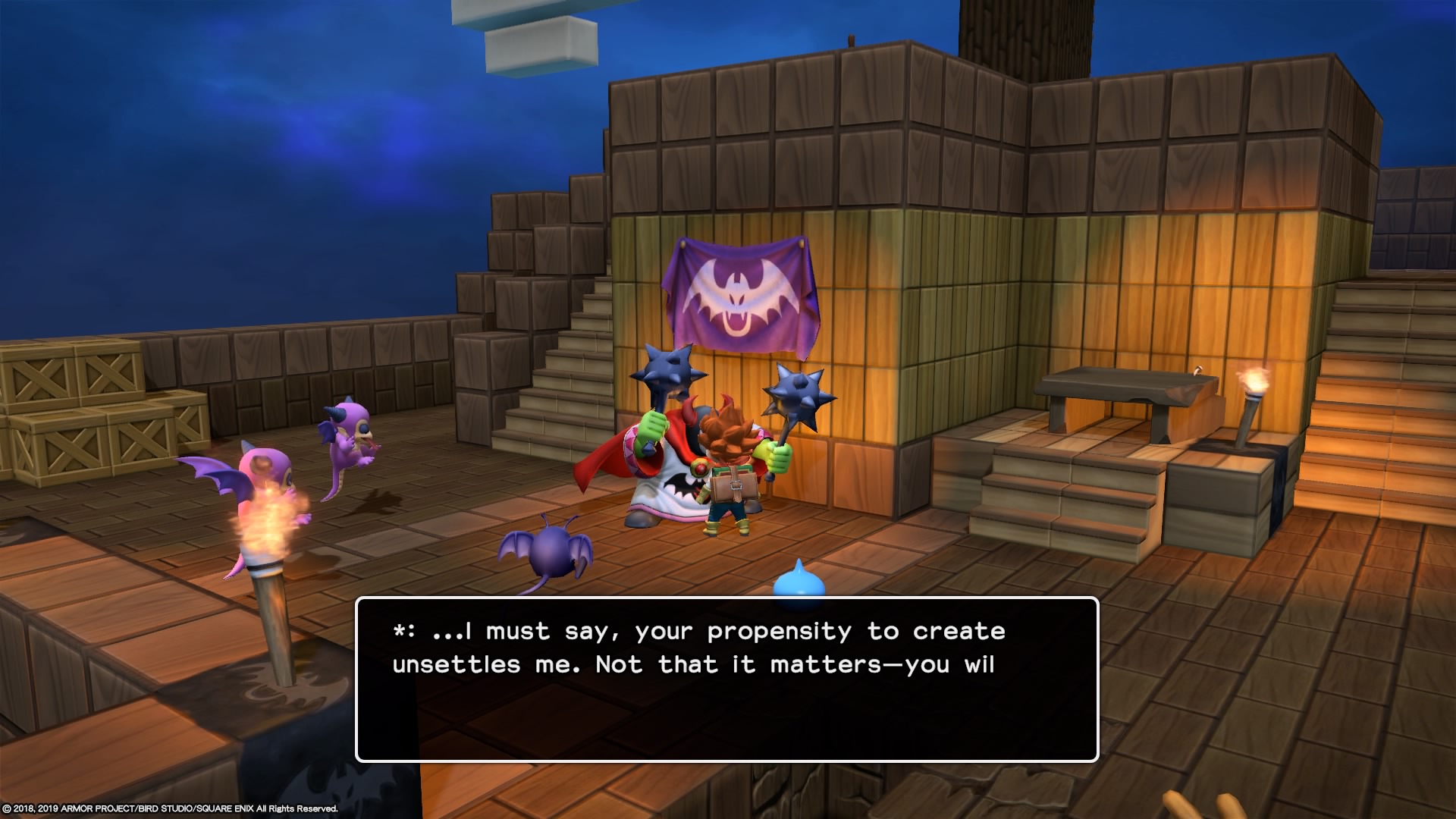 The game's main character is only an apprentice builder, but this didn't stop the Children of Hagon from kidnapping him and using his talents only for their benefit. Imprisonment, however, doesn't last too long, as the ship that carries the builder is hit by a terrible storm. Stranded on the Isle of Awakening, the builder is now free from the Children of Hagon's shackles and with the help of the mysterious Malroth, he sets out to the rebuild everything that has been destroyed by Hagon's followers and, in the process, save the world as Erdick's descendants once did.

Dragon Quest Builders 2 features the same good old tale against evil, but it's made charming by the writing and the many characters that the builder befriends during his journey. The game does its very best in making players care for them and wholly succeeds in doing so: all of the most important NPCs are memorable thanks to how they are written, and it's impossible to remain indifferent when listening to their struggles and how they go from being wary of the builder to become builders themselves. The story also features some very interesting and unexpected twists surrounding the Children Of Hagon's motivations and their grudge against builders which make an apparently simple story even more interesting.

The actual gameplay is what makes this sequel shine, though. Built upon all the elements introduced in the original game, this takes everything to a whole new level with new mechanics and a lot of quality of life improvements that make building your own base smoother than ever before.

Like the original game, Dragon Quest Builders 2 combines a rather straightforward action role-playing game experience with a sandbox experience in the vein of Minecraft and the like. During the game, you will be exploring a variety of locations (inspired by the whole main series) filled with enemies, treasure and materials that can be used to build your base. Unlike the first game, which feature a linear progression system that basically erased your creations at the end of a story chapter, Dragon Quest Builders 2 not only keeps track of what has been built on the different islands but also allows players to create their own kingdom on the Isle of Awakening, which can even be shown to other players thanks to the online features of the game. 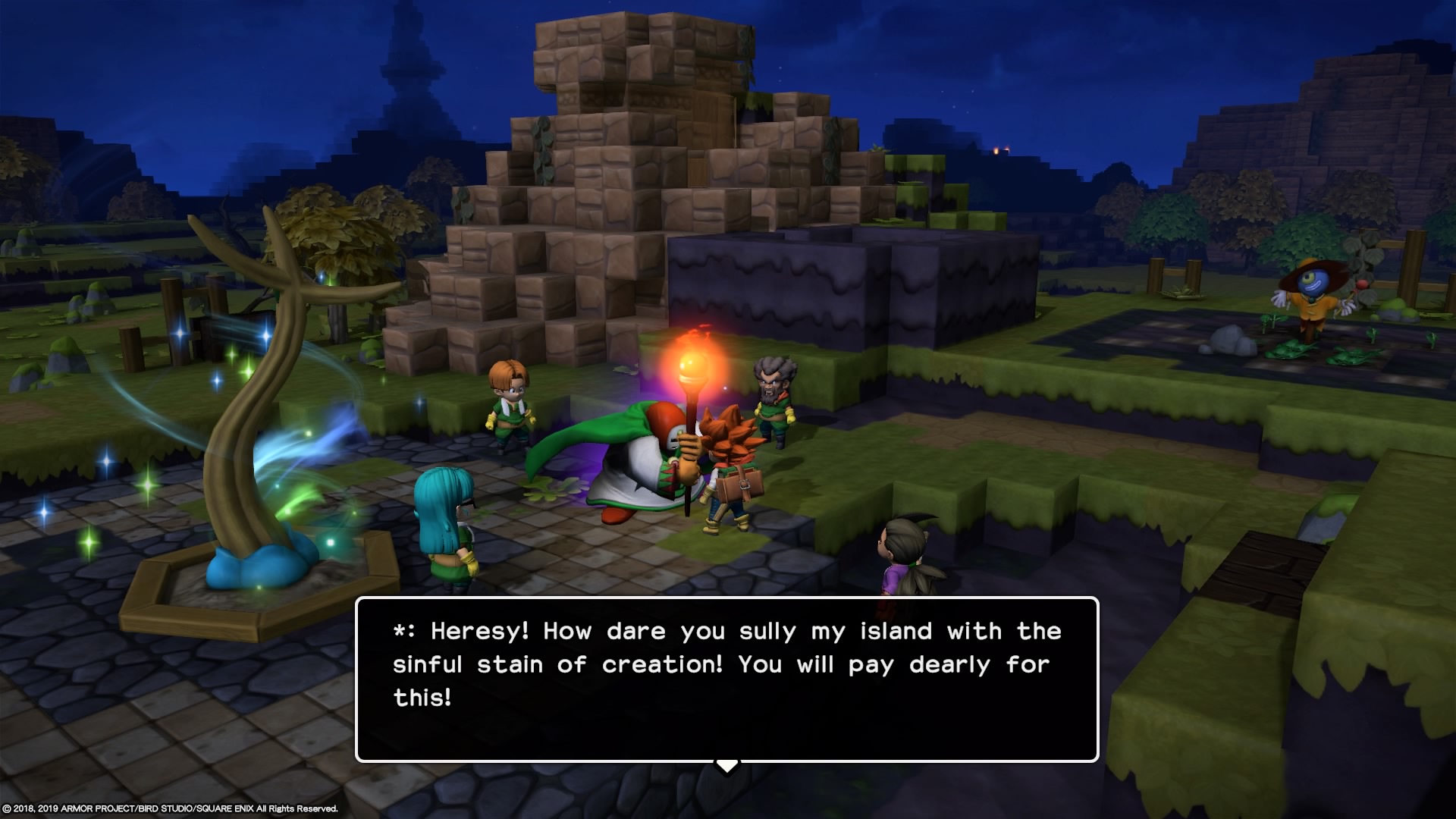 The gameplay loop is extremely simple, but it helps in teaching newcomers to the series and to the genre as a whole the basics of building. At the beginning of the game, your main character is an inexperienced builder, so he really cannot bring life back to the Isle of Awakening. For this reason, he must set out together with Malroth to gather materials and experience. This journey will lead the two to explore a lot of different islands with unique biomes, befriend the locals, help them bring their islands back to their glory days and see if any of them wants to go to the Isle of Awakening to help build your kingdom.

The islands restoration process is very straightforward. NPCs will give the main character some simple tasks to perform as well as more complicated ones that make up the main missions that must be completed to move the story forward, which will help players understand how to build facilities, keep NPCs happy and even let them discover new recipes for crafting. This gameplay loop becomes a little repetitive after some time, but this is alleviated by the fact that, at any time, you can decide to get back to the Isle of Awakening and get invested in some serious building.

NPCs appreciation points are extremely important in the game, as they are used to increase the base level and even unlock new recipes and islands back in the Isle of Awakening. Needless to say, this whole process is extremely engaging: I have often found myself playing one more mission every time I wanted to quit just to see what I could build next. Once enough recipes have been discovered, the sky will be your only limit, as you will be able to create pretty much everything from a simple village to a huge castle. With the help of your mallet and other special tools, you can also reshape the land itself, giving players even more freedom.

As mentioned earlier, players will be exploring islands a lot in search of materials and other important items, but the game will give players additional incentives in exploring thoroughly. All islands feature optional content in the form of the puzzle shrines, which reward players with a Mini Medal if they manage to solve the puzzles, which usually involves building the right objects and placing them in the correct location. Minor islands, which are explored to gather materials, are randomly generated ones which don't feature any puzzle shrine, but they still offer something for completionists, as clearing the list of materials available on the island will grant players some extremely useful rewards that will make building even easier. 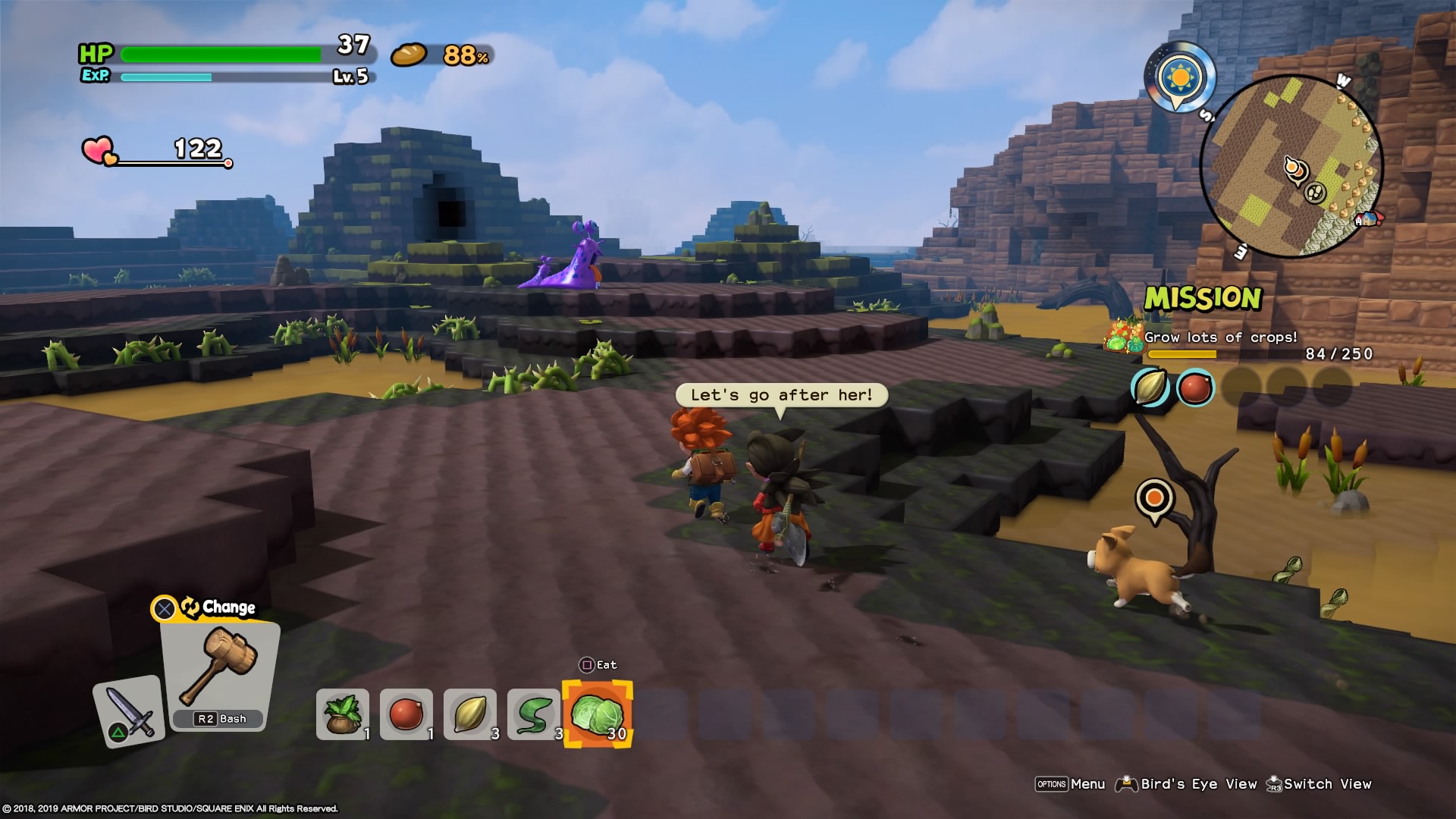 The action role-playing games mechanics in Dragon Quest Builders 2 are extremely straightforward but still fall in nicely with the crafting mechanics. At any time on the field, players can attack with their equipped weapon and move away to avoid enemy attacks. By leveling up you can increase HP and Stamina as well as Malroth's stats. Your character can also unlock recipes for new weapons as well as special attacks, like a simple charging attack, upon level up. Crafting weapons is the only way to increase the character's attack power, as there are no proper stats.

While battles against regular enemies are very simple, most of the times, boss battles are something completely different. These battles require players to be at the highest possible level and force them to come up with different strategies, as bosses cannot be taken down by simply charging at them. The fact that NPCs from your base also join in the battle makes them feel quite epic. NPCs will also defend your base whenever it is under attack, so giving them the best weapons available will make them stronger and less reliant on the player's direct intervention.

Dragon Quest Builders 2 also comes with extensive multiplayer modes which allow two players to build together on the Isle of Awakening and explore those of other players to check out their creations for inspiration. It's also possible to share screenshots online and receive appreciation from other players all over the world. While these features are not particularly game-changing, they do add quite a bit to the experience, making building an impressive base on the Isle of Awakening even more engaging. 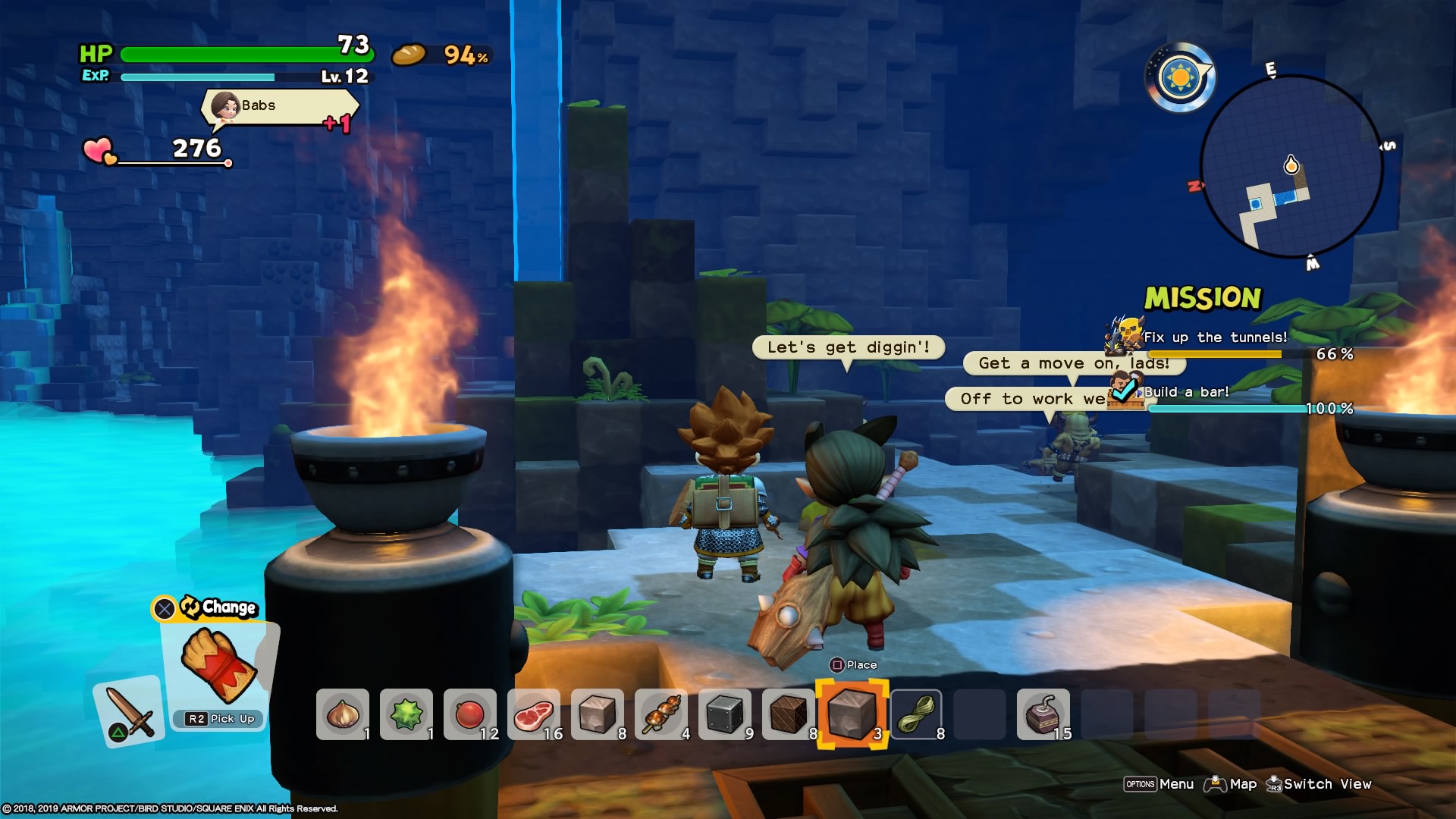 Dragon Quest Builders 2 is far from being one of the best looking games seen in the current console generation, but it still looks quite good nonetheless. Character models are simple but extremely well detailed; locations look just as good, with a full day-night cycle that makes some of them look even better. The blockiness of mountains and similar locations is to be expected as it is a precise design choice, but they still manage to look good and never feel out of place. The game also runs well on the base PlayStation 4 console except some minor frame rate drops happening in complex locations (like the mines on the second island) and when there are a lot of enemies on screen, especially during random assaults on the base. The music is more or less the typical Dragon Quest soundtrack, and it suits the game quite well.

Dragon Quest Builders 2 improves on the formula introduced by its predecessor in every possible way. The game is an extremely enjoyable experience for both Dragon Quest fans and sandbox games lover, a relaxing experience that sucks you in and only lets go only after a lot of time has passed.

Dragon Quest Builders 2 is better than the original game in every possible way, introducing many quality of life improvements and fixing some of the biggest issues like the linear progression system and more. And with a simple yet engaging story, excellent exploration, crafting and building mechanics and multiplayer features, the game is an excellent title that no fan of the Dragon Quest series and sandbox games should pass on, even if they never played the original.