Cuphead: The Delicious Last Course is a whole new island filled with tough-as-nails fights for fans who haven’t got enough frustration from the original 2017 run and gun game. With a new overworld to explore and tease a handful of secrets from, as well as a host of new, incredibly imaginative bosses to battle, this is a weighty expansion of the game. All of this and Cuphead: The Delicious Last Course still manages to remain true to the imagination and design of the original in a feat that must have been near impossible for the developers to achieve.

The story begins outside the mausoleum, where a mysterious, Charron-esque character spirits you away to this new land at the behest of Miss Chalice. From here, you’ll be asked to collect a series of ingredients for a frankly terrifying-looking salt-shaker chef so that he can bestow Chalice back to life. If you don’t know or remember who Chalice is, don’t worry; you’re probably not picking up this expansion for the story. Although the original did enjoy a sense of whimsy, with the devil’s dice and his nasty deals, it did very little to match with the bosses or the game’s overall design. The Delicious Last Course is very much the same, albeit even goofier, with a narrative that is more or less disconnected from the actual gameplay. What it does allow you to do though is play as Chalice as she returns to the physical plane via tasty cookies to battle against the bosses of this land.

Chalice has her own unique style for players to master if they’re finding anything a little easier. The differences are more than cosmetic but don’t sound that revolutionary. Nevertheless, she feels remarkably different to play, making swapping between her and the classic vessel-heads extremely tricky. For a start, her counter comes not from her jump but from her dodge. This seemingly tiny difference means you’ll be sliding across the map to catch those pink opportunities rather than bouncing up and down the screen. But to allow her proper vertical traversal, she also has a double jump. Again, it might not sound like much, but these changes completely overhaul your gameplay experience and work to make Cuphead: The Delicious Last Course feel fresh outside of the new challenges. The final addition is a new, invincible roll for getting through threats completely unharmed. It requires perfect timing to accomplish but can literally save your life in some of the bigger battles.

But the real stars of The Delicious Last Course are the villains and weirdos you’ll be slaying for ingredients. Everyone that fell in love with Cuphead also developed a powerful love/hate relationship with the bosses that were once challenging adversaries that inspired fortitude, impossible obstacles that inspired despair, or annoying little so-and-so’s that inspired pure, unadulterated fury. You’ll probably be happy/sad/angry to know that these new bosses are exactly the same while feeling completely different. The original game had you battling everything from Carrots to the actual Devil, so you might suspect that the expansion won’t feel nearly as varied or creative, but you’d be wrong. From bulldog fighter pilots (with jetpacks) to wizard cult leaders that remind you a little bit of the Ice King but not in a repetitive or derogatory way, you will encounter several new bosses that absorb your time. A standout addition in the bug mafia near the very start, with several characters to battle in each stage, the whole thing has this incredibly punchy tempo with brilliant mobster swing music undercutting it. Each boss has a handful of different forms you’ll have to defeat in sequence, just like the first game, and each one feels like an entirely new fight and challenge to best. On top of that, they look completely unique, such as the giant gnome whose beard, hand-puppets, and stomach you must defeat to win.

And coupled with the impressively varied bosses, each one looks fantastic too, with the same incredible art style that still feels jaw-droppingly unreal all these years later. Everything looks soft, curved, and smooth in a way that shouldn’t be a video game but somehow is. Colour is well used, and each boss has a unique background that brilliantly highlights even the smallest combatant.

Not much besides Chalice has changed in the combat. Players have a handful of attempts to slay the bosses, and that’s done through holding down the shooting button until your finger hurts, then pushing through the pain. You’ll have to avoid a near bullet hell level of threats and you can jump and dodge past them to keep yourself alive. A few arenas move, too, forcing you to race to the edge of your screen or get left behind. If you can convince someone to join you in the challenge, you could also have a coop friend who can revive you if they’re fast and lucky.

Most bosses can be defeated in under five minutes of a successful run. But you’ll need a lot more than five minutes to master their moves and overcome their various forms. This is an expansion of quality, not quantity, and you shouldn’t expect to rush through it unless you’ve made your own deal with the Devil. Cuphead: The Delicious Last Course is not as big as the original game, but it is more of everything you loved and hated (but secretly loved) from 2017’s release. There’s enough new to explore and conquer and yet enough familiarity to feel like you’re playing Cuphead again for the first time. 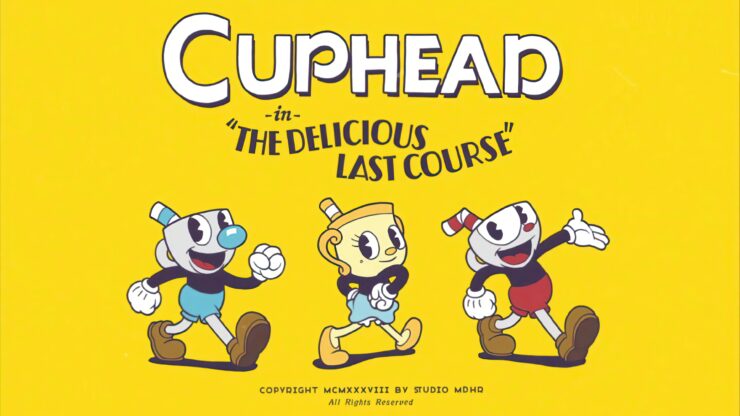 Cuphead: The Delicious Course is excellent fan service and the perfect continuation of a game that felt almost impossible to replicate. From the new boss designs to the addition of Miss Chalice, there is so much for everyone to enjoy, whether they just want to beat the new challenges or conquer them entirely.