Corsair recently announced the arrival of its new wireless gaming headset, sporting a new floating headband design – the HS80 RGB. Being a fan of the comfortable ski-band design that competitor SteelSeries uses, I was quite interested in Corsair’s new wireless headset for PlayStation 5, PlayStation 4, and PC. According to Corsair, its new outing offers a stress-free listening experience, and with recent offerings from the company lacking in the comfort department, a comfortable wireless headset for PlayStation and PC players would gladly be received. So how does the HS80 RGB look, sound, and “feel”? Let’s find out.

Design-wise, Corsair's new outing is quite minimal - there aren't many bells whistles on this headset. On the left earcup, we find a power button, incremental volume dial, and a USB-C port for wired use and charging. Attached to the left headphone we'll also find the flippable microphone that can be flipped up to mute it.

The HS80 RGB is a good-looking headset with a premium feel to it due to its new ski-goggle style headband and solid build quality with an aluminum frame and metal hinges.

In a similar fashion as the company's HS75 XB headset for Xbox, the HS80 comes with a Dolby Atmos license for PC players, delivering precise spatial audio.

Through Corsair's ICUE software on PC, the HS80 offers plenty of customization options, including EQ presets, EQ tuning, mic monitoring, and options to customize the RGB lighting that is present in the Corsair logo on each earcup.

I was happily surprised with Corsair moving away from its traditional headset design. As mentioned, I'm a big fan of SteelSeries's iconic ski-goggle suspension headband due to the comfort it offers, and, in a way, the HS80 is quite a comfortable headset. Unfortunately, though, comfort during longer gaming sessions can still be improved. After two hours of use, I could feel a clear strain on the top of my head - a thing I've been experiencing a lot lately with the "heavier" headpieces. Those using the HS80 during shorter sessions most probably won't experience this, but I can imagine those using this headpiece for work at home, might want to take it off now and then to prevent tension from building up.

The ear-shaped ear pads, however, I'm a fan of. The velour with memory foam really adds to the headset's comfort, especially for those wearings glasses.

The battery life of the HS80 has been rather subpar for me. Although Corsair boasts that it lasts 20 hours on a single charge, I had to charge it after roughly 15 hours with normal volume levels. Granted, RGB lighting was turned on, but even with the lighting turned off,  20 hours on a single charge appears to be quite “enthusiastic” for this headpiece. In general, the battery life of the HS80 is decent and can be compared to that of the Void, but in this price range, there are less expensive alternatives that offer more juice on a single charge.

When it comes to sound quality, the HS80 RGB does its job. It offers a good range and decent clarity across the board. Unfortunately, by default, the bass sounds somewhat “muddy”. Bass output can be improved on PC using Corsair’s ICUE software, but even after adjustments, I feel bass levels should be better for a headset in this price range.

On PC, Corsair’s offering really benefits from Dolby's Dolby Atmos object-based surround tech – the spatial audio really allows users to pinpoint where a particular sound is coming from, which is a huge plus in shooters. On PlayStation 5, spatial audio is handled by Sony’s own Tempest 3D Audio tech, and the HS80 does a good job of outputting Sony’s object-based sound tech, especially in titles such as Astro’s Playroom, Demon’s Souls, and Ghost of Tsushima: Director’s Cut.

The HS80’s microphone deserves praise for its excellent microphone. As already mentioned, it uses the same mic as its higher-priced brother, the Virtuoso RGB, and this is just one of the best mics that come with a gaming headset.

Would I recommend the HS80 RGB to someone for a wireless gaming headset in the $150 price range? Yes and no. Corsair's offering does a lot of things right, and I like the different route the company has taken with the new ski-band design. The microphone is easily one of the best on the market when it comes to headset mics. Yet, the HS80 suffers from somewhat muddy bass levels and battery life is subpar compared to the competition. These issues are easily alleviated on PC by tuning the EQ and occasionally using the headset in wired more for charging, but this isn't the case on PlayStation 4/5 where EQ tuning isn't available and wired use isn't really an option due to the limited range of the USB cable.

Also, the HS80 RGB lacks the versatility that other wireless offerings in this price range do offer. As such, multiplatform gamers are better off with offerings from other brands, including Razer's new Barracuda X and SteelSeries Arctis 1 Wireless, and Arctis 7P/7X. 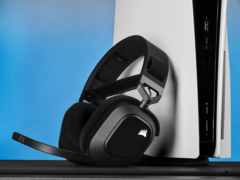 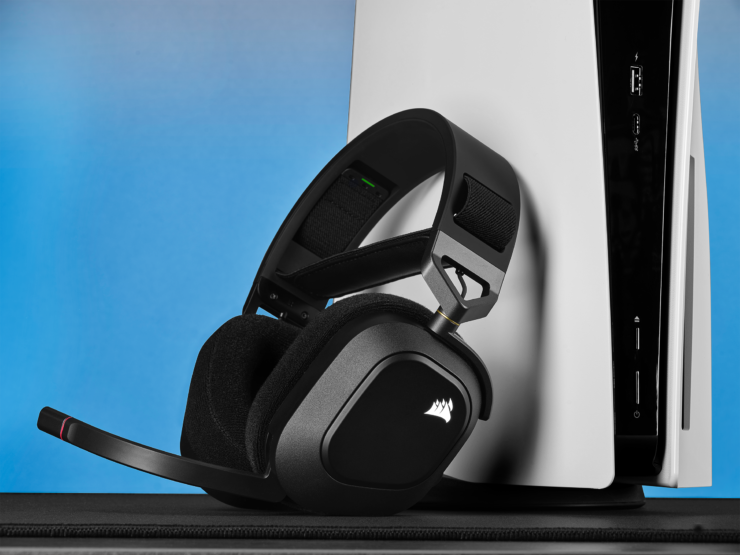 The Corsair HS80 RGB does a lot of things right. It packs a new ski-band design for increased comfort, a great microphone, and solid build quality. Although it suffers from somewhat muddy bass levels, it's a viable option for PC players. For PlayStation or multiplatform gamers, there are more viable alternatives available in this segment.