The HS75 XB Wireless from Corsair builds upon the manufacturer's HS70 series but is the company's first officially licensed headset for Microsoft's Xbox, including the all-new Xbox Series X and Xbox Series S.

Earlier this year I had the opportunity to test out Corsair's Virtuoso RGB wireless, and while I still believe the Virtuoso is one of the best-looking gaming headsets out there,  I wasn't really happy with the comfort it offered. How does Corsair's latest offering, featuring Dolby Atmos spatial audio, perform on the next-gen consoles, and what about its comfort? I tested this classy looking headpiece over the past few weeks on Microsoft's new entry-level console, the Xbox Series S.

Corsair's new Xbox offering is tightly secured inside the inner plastic of the box, and after removing the contents of the box, you're basically left with nothing - aside from the headset and a 1.8m-long USB charging cable that is. That's right: no wireless transmitters here or USB dongles.

When it comes to design, there are some clear resemblances between the HS75 XB and the Virtuoso, but overall, the HS75 XB looks less elegant. Don't get me wrong - with its aluminum hinges and mesh-look earpad covers, it's a great-looking headpiece, but its design is somewhat more geared towards gamers (no offense).

Corsair has designed the HS75 with silver 'grills' that serve as covers for the earpads, but let's get one thing clear right away - Corsair's new headset isn't an 'open-back' headset. The punctured grill covers had many believing as much, major outlets included, but this isn't the case - the HS75 XB is just your regular 'closed-back' gaming headset; all of the advantages and disadvantages that come with that included.

Just like the Virtuoso RGB Wireless, the HS75 XB offers 50mm high-density neodymium audio drivers in adjustable plush leatherette earpads and viscoelastic memory foam. The drivers have been custom-tuned to make full use of Dolby's positional surround sound technology, Dolby Atmos. Good to know is that this Xbox headpiece comes with the Dolby Atmos license, which normally sets you back $14.99. The Dolby Access App for Xbox automatically detects that you're using Corsair's Dolby Atmos-licensed headset, and you're good to go.

The padded metal headband has been reinforced with aluminum and offers plenty of adjustment steps that have been marked with rulers to show the height of each earcup. 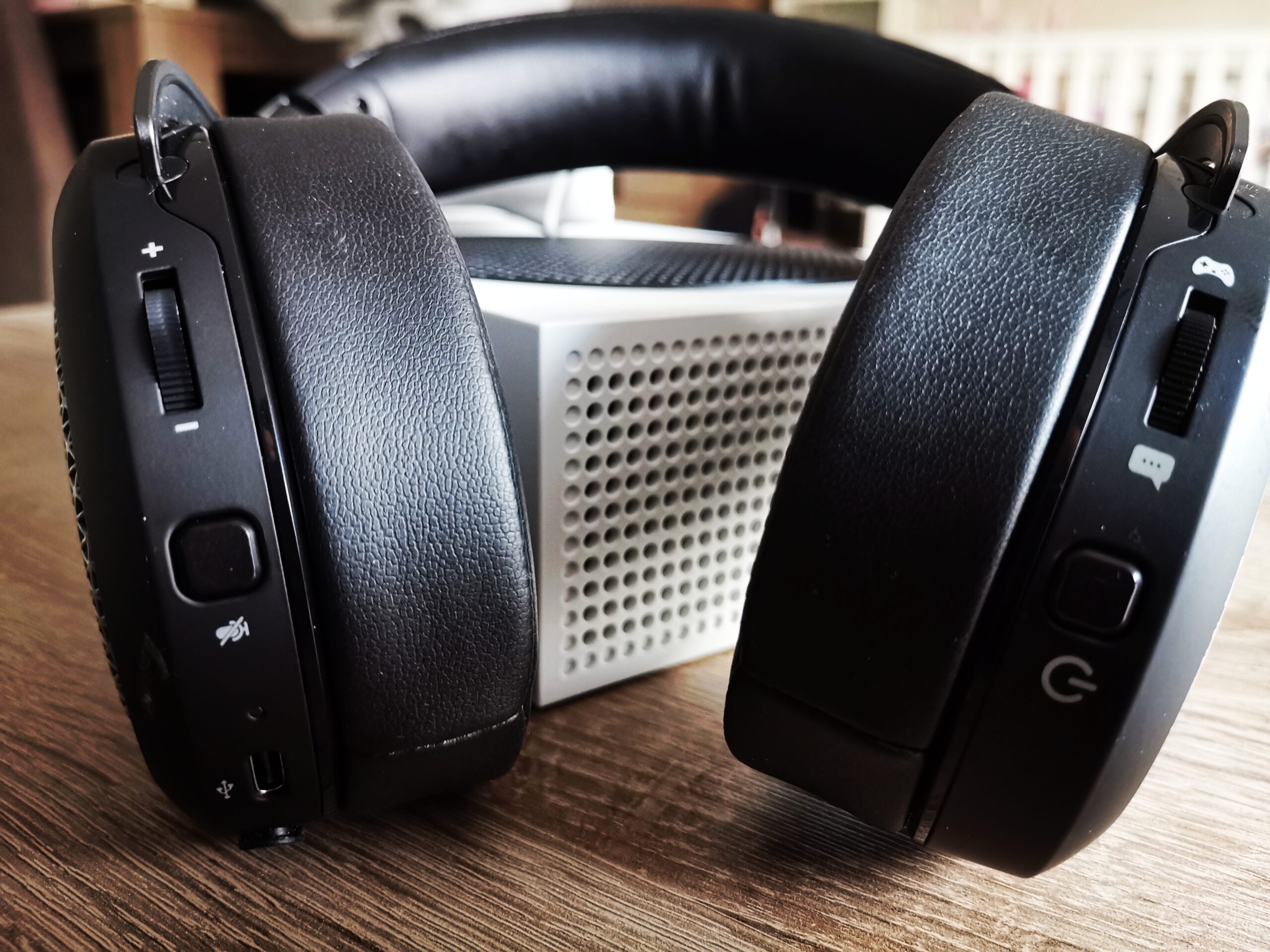 Corsair has outfitted the HS75 XB with a noise-canceling unidirectional microphone that reduces ambient noise and comes with an optional pop filter. Not using the microphone? It's fully detachable for when you're not using it (just don't lose it).

On the left earcup, we find a ratchet-dial for volume (a real nice addition to find your volume hotspot), microphone mute button, LED power indicator, and USB-C charging port. The right earcup houses the fairly large power button and on-ear game/chat mix dial - having the volume and game/chat mix dials on separate earcups is pretty much the ideal setup when it comes to button placement. Unfortunately, Corsair has left out a 3.5mm jack, thereby limiting connectivity to Xbox and PC (wireless Xbox transmitter for PC not included).

As for the headset's internal battery - the HS75XB packs a lithium-ion battery, which should provide up to 20 hours of juice on a single charge.

Weighing in at 375 grams (slightly above the official weight as specified by Corsair), the HS75 XB isn't the lightest of headsets, but even after extended periods of use, I haven't noticed any noticeable strains - something that I did experience while wearing the RGB Virtuoso Wireless. The headpiece rested comfortably on my head and, after having adjusted it properly, managed to block out external sounds pretty decently.

The leatherette earcups offer comfort aplenty, and aside from me finding them rather shallow compared to headset offerings from other brands, I can only say that my ears were in a good place even after long gaming sessions. One thing that I do have to mention is that those wearing glasses might do well to try the headset on first before removing all of the attached plastics out of the box - I tried on various eyeglass frames and Corsair's offering might just not fit well in combination with your particular model. This, however, is a common phenomenon with most headsets.

Ah yes, sound performance. That's what you're actually here for right? Well, you're golden with the HS75 XB. In other reviews, I've often criticized headsets for not packing enough bass - that's certainly not the case with Corsair's offering. Bass is deep, especially in Dolby Atmos 'performance mode' through the Dolby tuning Xbox app, but it doesn't drown out the mid and high-range frequencies.

Overall, the soundstage is rich and warm with plenty of separation between different instruments. While I was positively surprised by this headset's audio performance, there's a small BUT here that needs to be addressed. Dolby's Dolby Atmos object-based surround tech performs best in titles that actually support the audio format, and to date, there are only a dozen Xbox titles that do, including Gears of War 4, Gears 5, Ori and the Will of the Wisps, Rise of the Tomb Raider, Shadow of the Tomb Raider, Forza Horizon 4, Call of Duty, and some others.

In titles that don't support Dolby Atmos, however, you're left with your typical virtual surround sound experience, and there's a clear difference when it comes to positional audio - Dolby Atmos allows you to exactly pinpoint where the sound is coming from, whereas it's less clear with regular virtual surround sound. I'm not saying that the audio experience in non-Dolby Atmos titles is subpar, but it does open the way for offerings from other brands if you're not really focusing on Dolby-Atmos support. For instance, while it doesn't pack surround sound support, the SteelSeries Arctis 7X offers a lot more connectivity while still sounding great, and Razer's new Xbox-licensed Kaira Pro surround headset comes with a dual-mic setup and added BlueTooth connectivity in the same price range. 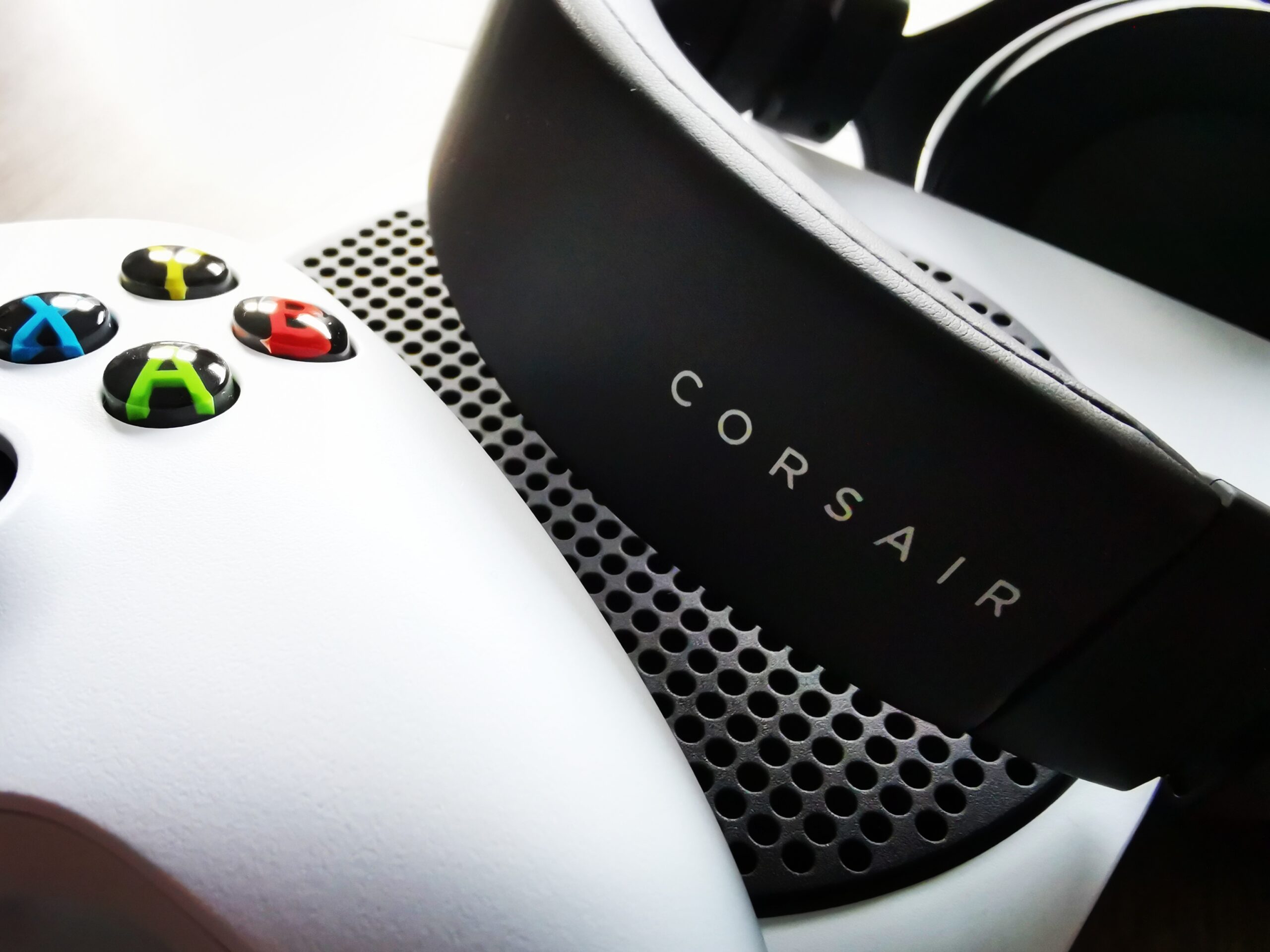 Positioning the microphone is easy, although perfect adjustment is not necessary for good voice output. Like most gaming headsets nowadays, Corsair's Xbox headpiece features a noise-canceling microphone, and while it's not on par with a dedicated mic, it did a pretty good job of blocking out background noises. As with the Virtuoso, voices sound warm and clear without sound deformations.

Corsair boasts that the battery inside the HS75 XB lasts up to 20 hours on a single charge, but the juice ran out on me quicker than that. During testing, I managed to fully drain the battery in roughly 17-18 hours. This is, however, with slightly above-normal volume. So, not the best battery performance out there, but certainly not bad either and good enough to get you through extended gaming sessions. Luckily, Corsair has outfitted its offering with a USB-C charging port for fast charging - something that is not yet the standard on gaming headsets.

The HS75 XB is Corsair's first officially-licensed Xbox headset, but already easily one of my favorites's on Microsoft's console(s). It's classy, well-built, comfortable, and works flawlessly with Microsoft's own Xbox Wireless technology. Audio performance has exceeded my expectations and Corsair's new headpiece really shines in Dolby-Atmos supported titles. Those not specifically focusing on the headset's Dolby-Atmos functionality might do well to at least consider offerings from other brands as there are plenty of alternatives in this price segment that offer additional connectivity with other platforms.

Corsair's first officially-licensed Xbox headset is a classy-looking headpiece that offers an immersive sound experience with plenty of a punch, and it does all of that without the use of any wires or dongles. The full Dolby Atmos experience, however, is only reserved for a limited number of titles.