Cooler Master has admittedly been hit or miss in the past when it comes to Mini ITX. Their Elite 130 and 110 were pretty decent, their H100 was rather poorly received, however. What does Cooler Master do when they miss the mark? They take notes, take feedback, and go back to the lab. This time they came out with the NR200 and you know what? They nailed it. I could end the review there. The NR200 is just shy of the overall size of 20L just squeezing it into that Small Form Factor segment while allowing for a wide range of cooling options and graphics card configurations. Not to mention water cooling support to boot. Enough of all that, let's get into the case itself and what Cooler Master delivers for $79 to the smol boi fans out there.

The version of the NR200 that Cooler Master sent out to us is the traditional black model. The NR200 is also available in White and in the NR200P model with an included tempered glass side panel, a GPU riser cable setup, and an extra fan for a total of 3 but it raises the price to $99.

The exterior of the NR200 is sleek and free of flair outside of the full ventilated and meshed side panels. If you were going to set this up for an HTPC or living room gaming PC it could almost pass itself off as a subwoofer if placed on the floor. But if you place it in a cabinet it'll be a nice box. The rear of the case shows off the triple slot capable graphics card expansion slots and the fully adjustable 92mm fan mount on the rear.

The side panels for the NR200 are super simple to remove with a ball and socket retention mechanism at the top and a ledge at the bottom that the side panel sets right into. Another fun design consideration of the NR200 is that the side panels are swappable, so you really don't have to worry about which side they came off of, just slap them back on when done. Both side panels feature generous ventilation holes and a magnetic dust filter on the inside to sure your system stays clean and airy.

On the motherboard side of the case, you'll see a removable fan mounting system that allows you to increase intake air from that side by adding up to a pair of 140mm fans or a 240mm radiator for an AIO for your CPU. The backside is pretty simple with enough room for managing cables from the fans but also where you'll access the screws to remove the PSU shroud for mounting your SFX PSU or relocating the shroud to the front of the case.

The top of the case pops right off using the same ball and socket design (thumbscrew retention on the back to prevent accidental removal. Once the top is removed you have full access to build from just about any angle so you're not going to find yourself frustrated like in other cases where you have trouble reaching that pesky 8-pin EPS connection. The front of the case pops off and gives you access to the two 2.5" drive holders and the water pump mounting holes as well. If you're wondering where the 3.5" drive support is you'll be strapping that chonk to the side fan bracket and you'll be giving up one fan support for that. But the fact that you can still fit a 3.5" drive in this size case is a nice addition that is often glossed over. The front panel is entirely steel, so no flimsy plastic there.

If you thought that the only fan was the preinstalled 90mm rear fan like I did you'll be pleased to find an extra 120mm CM Sickleflow fan in the accessory box with push pins and fan grill already attached! You'll also find a second fan grill and the pins ready to go. The fan grills can be exceptionally beneficial if you have a radiator on the side with fans in a pull configuration so that you don't have to worry about the radiator tubes bumping into the fans. The upper fans are mounted with simple push pins, but because of that, you'll not want to try and mount a top radiator here as there will be massive component collisions. Oh yeah, you can fit two more 120mm fans in the bottom, so it's possible to stuff 7 case fans into this tiny thing!

Front I/O is plain and simple just the way I like it, especially on a form factor that is often missing the header for a Type C connection anyway. You'll get a pair of USB 3.0 headers along with the expected power and reset switch along with a combo mic/headphone jack. The power button does light up in the usual Cooler Master logo polygon. The internal headers are excellently thought out with the front panel heads in a binding tool that makes it a plug and play install if the board header is in the default layout, literally plugging in three cables and one.

How Did The Build Go

I can't express how simple this build went together. The components used in this build were originally used in a Node 202 build which is why we stuck with the low profile cooler. I seriously ran into no real issues when putting this entire system together. The closest thing I ran into was that I needed to remove the 92mm fan in order to install the EPS 8-pin because it's so far into the corner of the Aorus B450 motherboard. 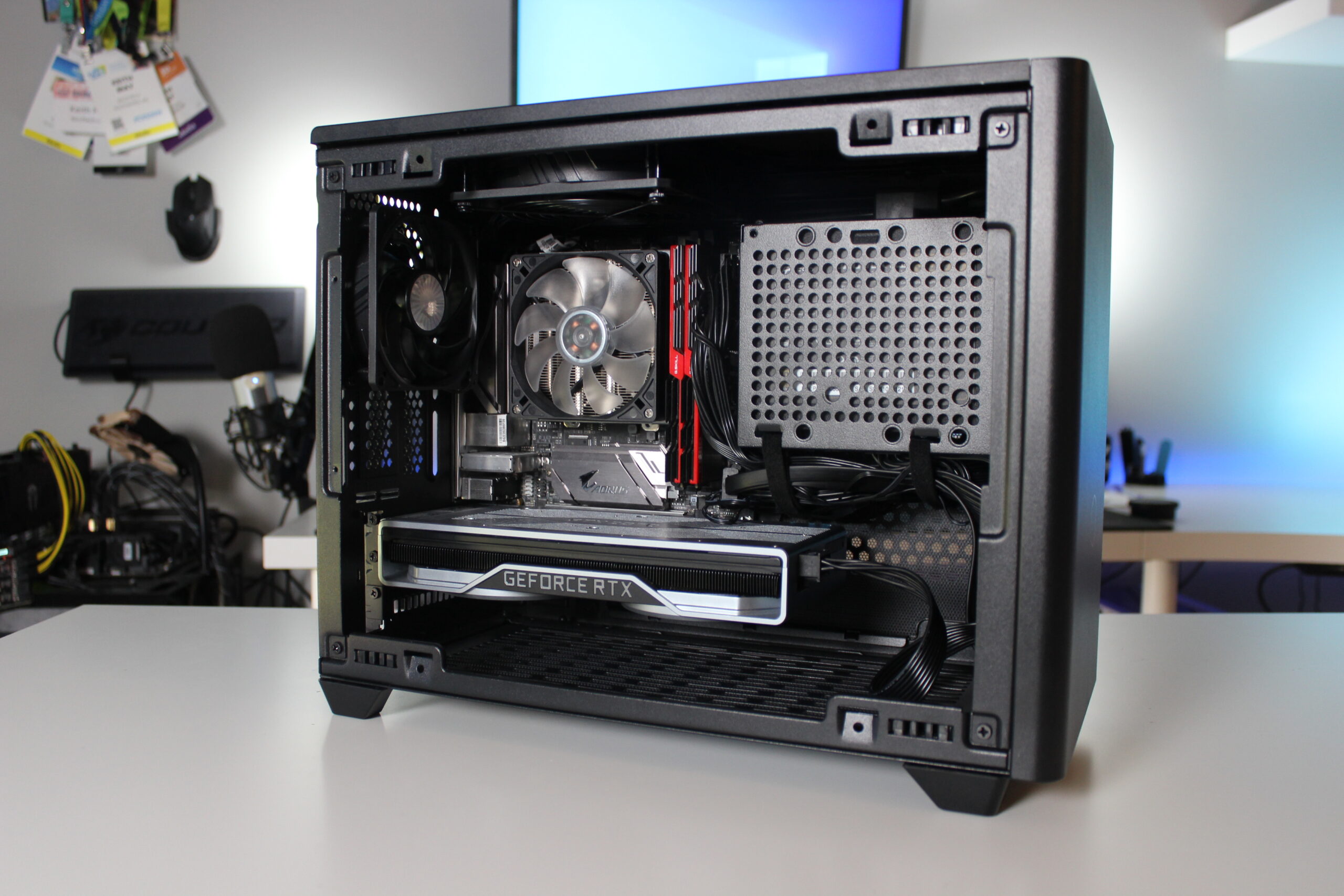 If there was anything negative to say is that it made me really reconsider my components used and wished I had gone for a much larger air cooler or even water cooling for the Ryzen 5 3600 we used, or even a bigger GPU since surely this case could easily dissipate the heat. 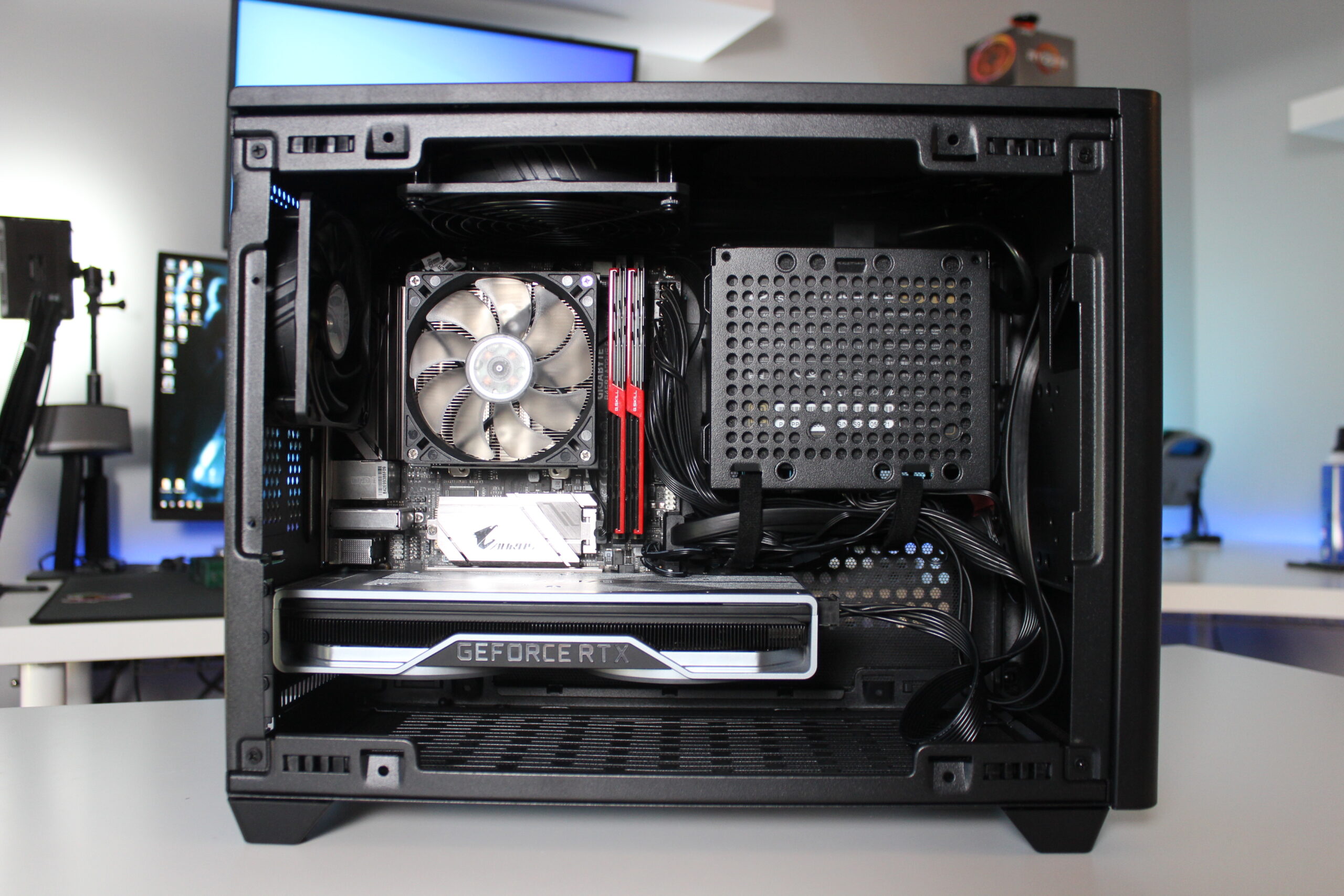 Since this is the VR system that I moved from a Node 202 I have at least a point of reference for thermals, although it might not be the fairest comparison it can show the difference in thermals from a slim ITX case like the Node 202 vs the performance the NR200 can deliver. The CPU I used was the Ryzen 5 3600 (clocked at 3.8GHz at 1.1v for thermal control in the node 202) with the Cooler Master G200P on an Aorus B450 ITX board with 16GB of G.Skill Trident Z DDR4 3200 CL16, and our GPU used was the GeForce RTX 2070 Founders Edition.

Okay, I'll concede the drastically better thermals are due to having additional fans in the case, and the overall design of it, but they are what they are. The Cooler Master NR200 simply lends itself to cooler thermals due to the design and layout they implemented. You'll not have to be nearly as concerned with thermal limitations in this case as you would be in something like the Node 202 and it is smaller still than the H210i we recently reviewed while having similar, if not better compatibility and it was much easier to build in the NR200 over both.

At the end of it all the Cooler Master NR200 is more than deserving of an Editor's Choice award. The NR200 is a solid case, not flimsy at all in construction. It's one of the easiest cases of its size to build it. There is more modularity to this case than even those twice it's size and I'm pretty sure I missed some features along the way. I didn't even get close to testing out every single configuration possible.

The reliance on SFX PSUs might be a bit of a downer for some people but if you've got access to a 3D printer then you'll be able to snag the files that Cooler Master has put up on their site to print yourself a bracket for a full ATX PSU, but I recommend as short of one as possible. The compatibility in this case is just staggering. Normally I'd be talking about all the concessions and 'well then' things you could think of, but that's not the case (no pun intended) here. Those looking for a more showy build might consider the NR200P over the regular NR200, but there's something just so appealing about the sleek little black box that can be so inconspicuous but still be able to cram something like the GeForce RTX 3090 Founders Edition into along with a 16 core 32 thread powerhouse Ryzen 3950X. 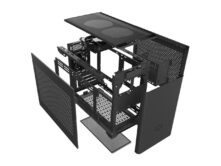 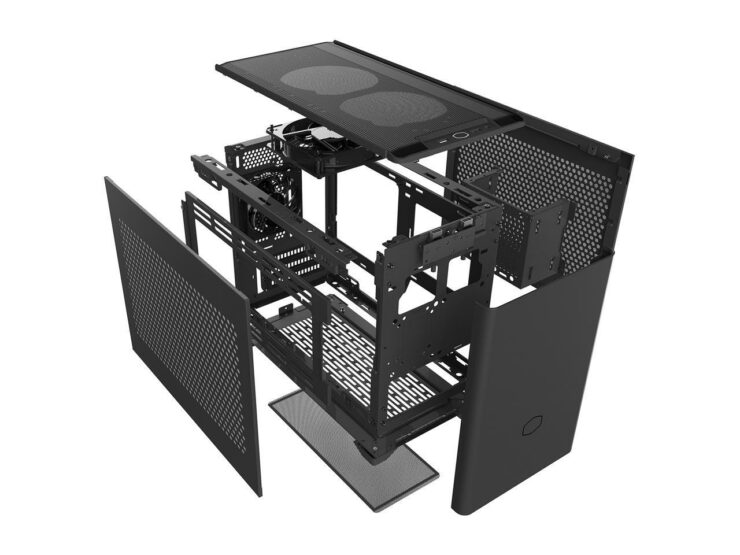 The Cooler Master NR200 is more than deserving of an Editor's Choice award. The NR200 is a solid case, not flimsy at all in construction. The compatibility in this case is just staggering.