During CES 2019 the Cooler Master MasterBox Q500L made its first appearance to the public and and I was really impressed with the direction over the Q300L by allowing a full size ATX system to fit in the volume of an already small mATX form factor.  The Q500L even made its way into my 'Top 3 Surprises From CES2019' roundup as I was exceptionally skeptical after being briefed on it but not having seen it until then.   Cooler Master has finally launched the MasterBox Q500L and we got to get our hands on it in the following video and find out if it was possible to finally shrink my workstation down to a size that makes it take up so little room I could finally fit it back on top of my desk without being a hindrance.

The MasterBox Q500L is a fairly impressive achievement by the team at Cooler Master who were able to take an existing design and modify it in a way that it feels natural and is easy to work with.  Sure, there are limitations when it comes to graphics cards and power supply selections, but even in our setup after choosing to replace the MasterLiquid 240 AIO with a small powerful air cooler we were able to move the power supply up enough to even use an EVGA Power Link to help tidy up the inside even more.  The only major complaint I have for the moment is we're still not clear on when we can expect to see all of those wonderful accessories shown off at CES, perhaps I'll just flex my old modding muscles back into shape and really make this one mine.

So for a case that can be build in a traditional stand, inverted design, or even laying down to make a HTPC the MasterBox Q500L has you covered in those.  Don't like where the I/O is, then move it all around since there is not much stopping you.  Cooling concerns you say? Nothing is stopping you from top and bottom mounted fans along with the rear exhaust and if your PSU is short enough you could fit one in the front to boot. 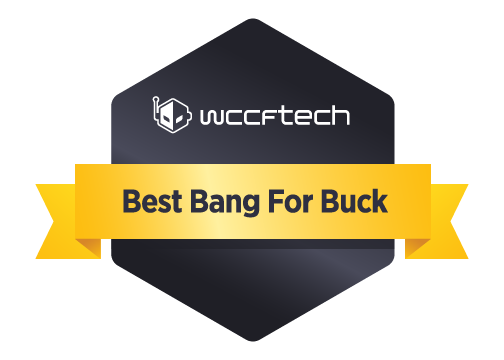 The Cooler Master MasterBox Q500L easily walks away with the Bang For Buck Award at $59.99 on Amazon.

A joy to build in and giving people who want to build a smaller system without compromising platform expandability that you don't get from mATX or ITX, but you'll want to be cautious of your GPU and PSU sizes.