The gaming motherboards are built on the renowned and trusted ROG gaming legacy. The new Maximus IX Code motherboard was designed to forge premium gaming features combine with streamlined styling to create an all-new model for this generation. The Maximus IX Code makes the distinctive ROG Armor more accessible to gamers and enthusiasts seeking a unique look for their builds. AURA Sync lighting adds to the aesthetic appeal, while practical features like onboard Wi-Fi and long-lasting components give gamers everything they need in a high-end board.

The series also boasts ROG SupremeFX with a significantly new upgraded audio solution on both back and front panels, advanced networking, fastest onboard M.2 storage interfaces with up to 32Gbps, and Intel USB 3.1 Type-C with power delivery up to 15W for the ultimate gaming experience.

Maximus IX Code is not only equipped both Type-A and Type-C on rear I/O but also a special implemented front USB 3.1 connector to enable 10Gbps transfer speeds and give users the convenience of Type-C ports at the front of the chassis. ROG has also partnered with chassis vendors Lian-Li and In-Win to ensure users can take advantage of this header. The corresponding chassis should be released to market at or near the Kaby Lake launch date.

On the Maximus IX Code the M.2 can be utilized for PCIe RAID, by combining the M.2 PCIe storage with another PCIe storage to squeeze out every last drop of PCIe storage performance.

3D printing or additive manufacturing is a process of using additive layers to create three dimensional objects from a digital file. One of the most eye-catching topics recently in the industry, the very nature of 3D printing is to bring out the endless possibilities for customization, a new kind of value-added feature for those who enjoy the philosophy of “make it your own”.

However what does this technology have to do with a ROG motherboard? This generation the ROG Maximus IX Code ROG offers a template for enthusiasts to print out their own ideas as DIYers can now make their own customization in whatever color they are interested in with ease and hassle-free.

ROG SupremeFX has been significantly upgraded from last year’s solution. The most unique component that was added to the solution in this generation is the SupremeFX High Fidelity HD Audio S1220. This new codec features an unprecedented 113dB SNR line-in and 120dB SNR line-out that allows users to stream and record with minimal noise. Looking at the RMAA performance, the results speak for themselves.

Maximus IX Code equipped AURA RGB lighting from top to bottom, ensure bright, evenly distributed illumination of your build, lit up and customize your own favorite LED effect to cast a stunning multi-color glow across your build, change shades to indicate CPU temperature, or pulsate in time to the beat of your favorite tunes and a lot of more. 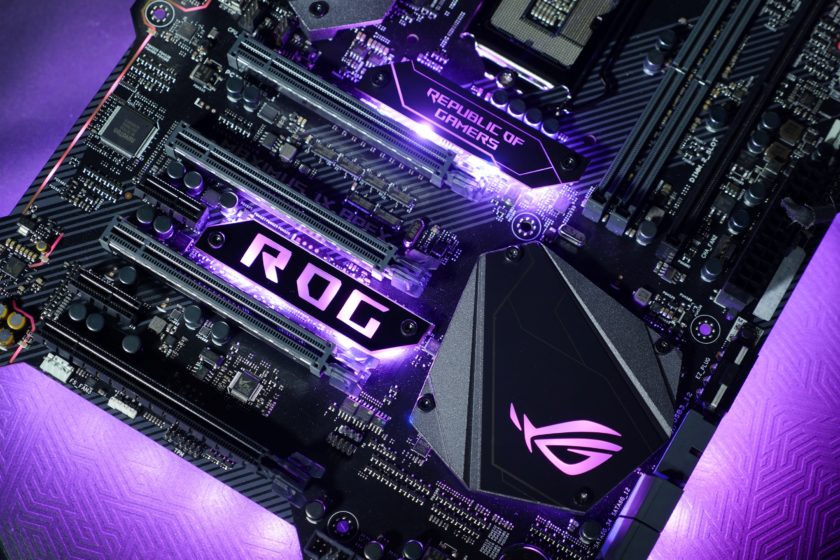 There are 2 independent onboard LED groupings – Back IO and Power/Reset Button, and Northbridge logo. Together with 2 additional independent AURA headers, 2 more RGB strips or AURA sync compatible devices can be controlled. While all can be synced up through software AURA and also 9 changeable lighting effects among all your modding gears. It’s easy to use and can be quickly installed to cast brilliant colors across your rig and room. These two onboard RGB strip headers supporting 5050RGB LED strip standard with a maximum power rating of 12V/1A per strip. This equates to a maximum strip length of approximately 2 meters for the best brightness.

Aura Sync is also a part of lighting control feature that can be easily utilize to help you sync up other RGB lighting peripherals, user can use this interface to setup your AURA lighting individually or united it together as one. However do keep in mind that this feature may be different on other peripherals as not all products have same effects and lighting mechanism.

ROG has also improved on the networking port with Onboard LANGuard; it uses advanced SOC technology to combine the legacy LANGuard elements into one chipset, including signal-coupling technology and premium surface-mounted capacitors to improve throughput. Onboard LANGuard as well features surge-protect ability with no less on electrostatically-guarded components (ESD Guards) to protect motherboard LAN from surge damaging that may be caused by either lightning strikes or static electricity. Onboard LANGuard gives you exactly the same protection as always, 1.5X higher on surge and 1.9X higher on static-electricity tolerance.

Current ROG Z270 motherboards feature the Intel I219-V Gigabit Ethernet chip, and so the following performance comparisons are based on it. As you’d imagine, having the full triad of Intel hardware on your PCB (CPU, PCH, LAN) also gives better compatibility, energy savings and the chip itself can offload UDP/TCP checksums from the CPU, reducing PCH-CPU traffic and overall CPU use.

SafeSlot provides the user with a great deal of protection on the PCIe slot, reinvented and strengthened through a new insert-molding process to bind the slot for fortifying metal for superior retention and shearing resistance, reinforcing the best strength on all X / Y / Z axis. This new armor is designed with the concept to extend longevity and durability while heavy graphic cards are taken place, SafeSlot was designed using metal hooks to the plastic slot itself which brings user the real benefit on PCIe strength in all 3D X / Y / Z axis.

A lot of R&D effort is put into the Q design detailing on all over the boards, hoping to provide user a better DIY experience on all cases. Q-shield was designed to be soft and flexible for nicks free and cuts free. Q-Code makes troubleshooting POST failures even easier. Q-LED leads you to the POST status of the system. 1-Clip Q-Slot helps user to have better experiencing on upgrading the graphics cards with ease. Q-DIMM makes memory modules insertion simplified with just one easily push. Q-Connector takes part for better DIY experience, a sweet little gadget for system front panel installation. All these were made for DIY users that care for quicker and better DIY experiences, no more hassles and hazards on DIY!

ROG RAMCache II software provides transparent solution to increase overall storage performance by utilizing the system memory that is not in use. RAMCache II allocates a cache of RAM between the computer hard disk and the applications, and then reads in real time your performance needs regarding the applications you are currently using and the disk I/O demands. It will copy the most frequently used data from the disk to the RAM cache where it can be processed faster, and then automatically writes it back to the disk. One more thing worth noting is that RAMCache II is now ready to support NVM Express protocol storage devices.

While you protect yourself in the game, Maximus IX Code protects all sides in the real world.

One thing worth noting is regarding the PCIe bonding structure, usually the part is designed simply by inserting the metal pin into the plastic slot, which is then fix it to the motherboard. In other words, the strength of the structure on the Y-axis is depends solely on the resistance of the surface friction between metal and plastic. This sometimes results in trouble when the user roughly handles the PCIe slot. ROG resolves this by using an extra hook on the metal pin right before inserting it into the plastic slot. This small technique results in a direct increase in durability of the PCIe slot and as well as an extension on the lifespan of your motherboard.

Together with SafeSlot and the slot binding structure, solder points have also been increased. This gives extra strength for all axes, with 16% durability improvement on X-axis; 66% on Y-axis; and 34% on the Z-axis. On the Maximus IX Code both DRAM and PCIe slots are utilize this technique to ensure that the best protection possible.

Additional resettable fuse protection connecting on ports and DRAM to against over current from short-circuits.

2X greater protection than the industry standard from electrostatic discharges, to extend a better device life-span for onboard PS2, USB, Audio and LAN ports.

Fan tuning is always a critical consideration when planning an efficient/long lasting/quiet system, ROG leads the motherboard industry as a pioneer on this subject with both Fan Xpert software and the UEFI BIOS interface. For Maximus IX Code we bring you the whole new fan control IC with the capability of OTP (Over Temperature Protect) and OCP (Over Current Protect) to protect your fan IC from potential danger. Together with “Extreme Quiet” mode for the CPU fan and all onboard Chassis fans, PWM/DC mode auto detection, Water Pump header, and High AMP fan headers, this generation features by far the most comprehensive cooling control to date.

When the CPU in the water-cooled state, GPU may also be a part of the key factor for case’s environmental temperature. The new fan control function can set GPU temperature as a fan tuning source, more accurate and effective to reduce the system temperature!

Fan Xpert 4 features Extreme Quiet mode on all chassis fans and as well as the CPU fan. (Note: fan extension card, pump header and OPT_fan do not support this mode)

All onboard fans are equipped with auto PWM / DC detection and manual modes:

Fan Xpert 4 gives you PWM / DC auto detection on all fan headers, which makes building the system as simple as it should be. (Note: OPT_fan is not included)

Moreover users can still enjoy the DIY tuning on all onboard fans as manual PWM / DC adjusting is also available to all onboard fan headers. (Notice fan extension and OPT_fan is not included)

Maximus IX Code supports the Fan Extension Card, which is an alternative one-to-three fan hub to expand the onboard chassis fan up to 8+3 and thermal sensor sources to 10, utilizing the 4-pin Molex connector to power up these three extended fans, while each one of them can either be controlled specifically as three different fans through onboard EXT_FAN header to EXT_FAN_IN on the extension card, or can be set to run as an unison fan by connecting with FAN_IN, in other words, all fans are capable of controlling under UEFI or through

FanXpert 4 under OS to fulfill your needs in either DC mode or PWM mode. Moreover, to enable user a more powerful scenario, all extension fans can be set to look up to multiple sensors as well, authorize you a total control solution on this high-end system build.