There are two parts of this review, first one is the processor and the second is the motherboard. While the review mainly focused on the motherboard, the processor is something to talk about as they are an essential part of this yearly upgrade cycle that Intel is bringing to consumers.

Intel's Core i7-7700K Is Nothing To Get Excited About

Intel Kaby Lake series brings us the 7th generation processors in the mainstream market. They feature what Intel's calls their most optimized 14nm node, 14nm+. Intel also says that these processors bring performance improvements and support for higher clock speeds. Essentially, Kaby Lake are a better tuned Skylake uArch for the mainstream community.

But Kaby Lake isn't as exciting as it sounds. With Kaby Lake being one of the worst Intel launches when it comes to NDA. Majority of the tech sites have already tested the Core i7-7700K processor. Yes, it is faster compared to Core i7-6700K. But as a result of obtaining faster clocks, it runs hotter and sips more power.

It does what Intel promised, to deliver faster performance and higher clock speeds but it breaks the efficiency rating of Core processors which although doesn't matter a whole lot to the mainstream audience but is some thing that goes opposite to the principles defined by Intel. So yeah, you get that 10% faster performance than Core i7-6700K and you also get than 7% clock speed bump. In return, you get higher temperatures that are much worse when overclocking (The Core i7-7700K can do 5 GHz with ease provided you have a beast of a cooler) and with that clock bump, you get higher power consumption.

Lastly, there's no IPC increase. Kaby Lake is the same as Skylake with higher clock speeds to simply put it. And the worse thing is that it might be so for the next 2-3 generations. Upcoming Intel Core series such as Coffee Lake (Kaby Lake Refresh) and Cannonlake will be bringing no incremental IPC improvements and will add more cores for better performance throughput. So without further to say, Intel Core i7-7700K is without a doubt, the fastest mainstream chip in the market but it has too many drawbacks in terms of power and temperatures that make Skylake still look as the better option for gamers. 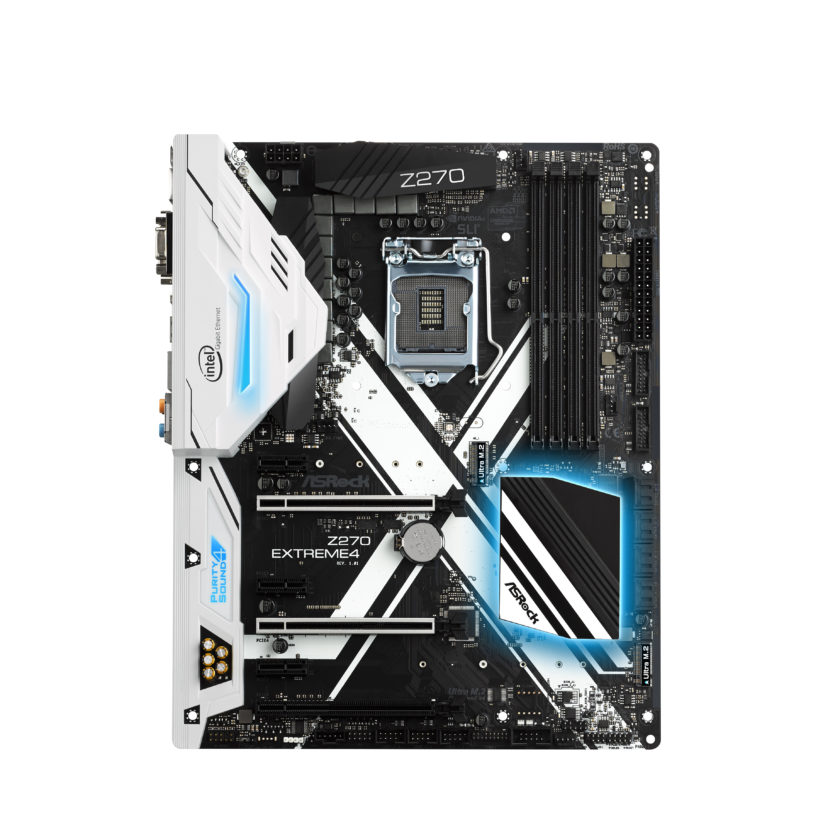 The ASRock Z270 Extreme 4 features a great design that comprises of a white and black color scheme which is very popular among gamers and enthusiasts. There are a lot of good chassis options that come in white / black color schemes so this motherboard could go really well with them.

The motherboard is feature rich with tons of storage options, support for multiple high-performance graphics cards in SLI and Crossfire configurations and it also has future support for Intel Optane series memory. The key thing for this product is its price, at $150 US, the ASRock Z270 Extreme 4 is an absolute steal that allows you to built high-performance desktop PCs without spending too much on the motherboard. It supports both 6th and 7th generation processors which is a great thing and older coolers are also compatible on the latest socket.

The deign really stands out as ASRock is using alphabets on each motherboard to mark their positioning in the 200-series lineup. The Extreme series is being denoted by "X" and we can see the familiar pattern on the PCB of Z270 Extreme 4.

ASRock leaves out a single slot under the I/O cover that you can use to install a wireless WiFi module however they don't bundle it with the board. It's expected as this is board costs just $150 US so you'll have to spend a bit extra for those wireless features. Also, this motherboard does have metallic PCI-e slots but doesn't use the same feature on the memory DIMM slots which is something other manufacturers are offering.

At $150 US, these are just minor issues and the price is absolutely well worth for the ASRock Z270 Extreme 4. A solid budget motherboard offering that will help you build a great gaming desktop PC without spending a lot.

At $150 US, the ASRock Z270 Extreme 4 is well worth as it is a solid budget motherboard offering that will help you build a great gaming desktop PC that packs tons of features and has RGB Lightning too for that OOMPH! Factor.