The ASRock Z270 Extreme 4 motherboard is styled in white and black.The motherboard comes in the standard ATX form factor. As you can tell, the large "X" marking that runs across the PCB is used here to denote the "Extreme" series branding. ASRock will have more Extreme series boards based on the Z270 chipset down the line. 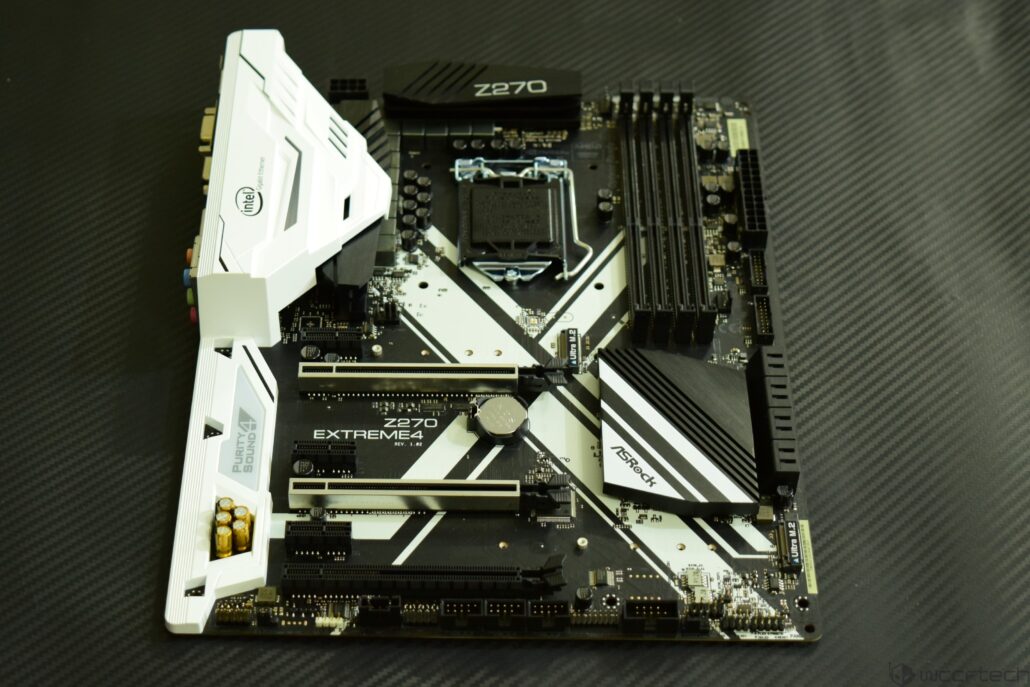 The ASRock Z270 Extreme 4 is designed for the mainstream audience and is more than just a face life over the Z170 Extreme 4. The board packs a better overall design scheme that allows for faster connectivity, memory support and storage options.

ASRock has designed a protective cover for the motherboard that spans the entirety of the left section on the board. The PCB is of matte black color with white lines textured around the CPU socket. 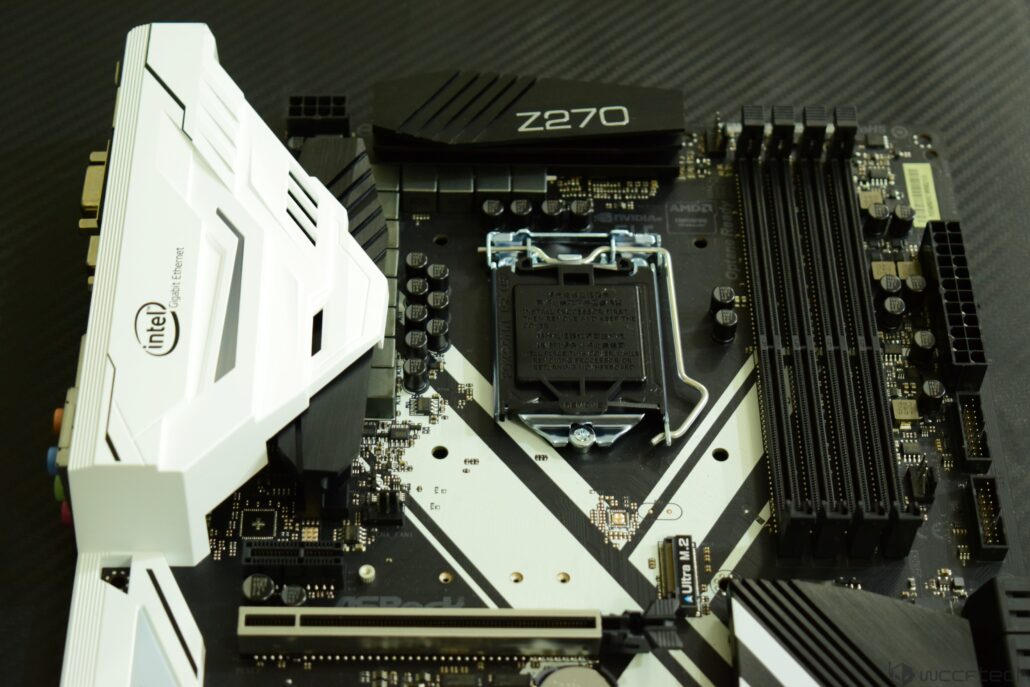 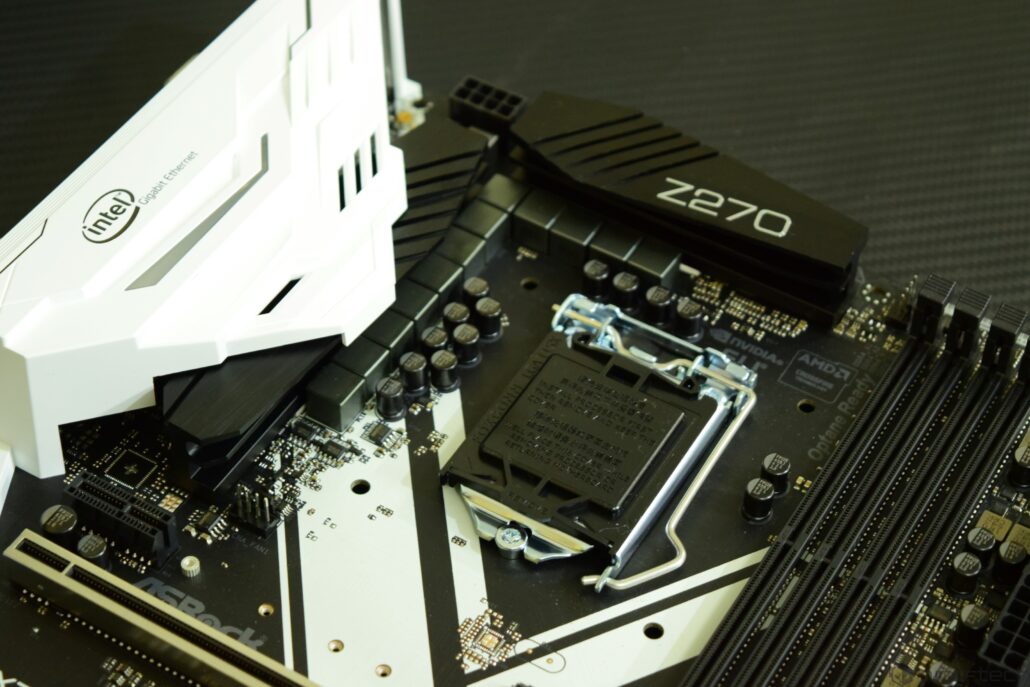 The motherboard packs a 12 Phase Digi Power PWM supply which powers the socket. The PCB is outfitted with long lifespan, Durable Black solid state capacitors that have an endurance rating of over 12,000 hours. The powerful VRM design allows overclockers to get the most of this motherboard. 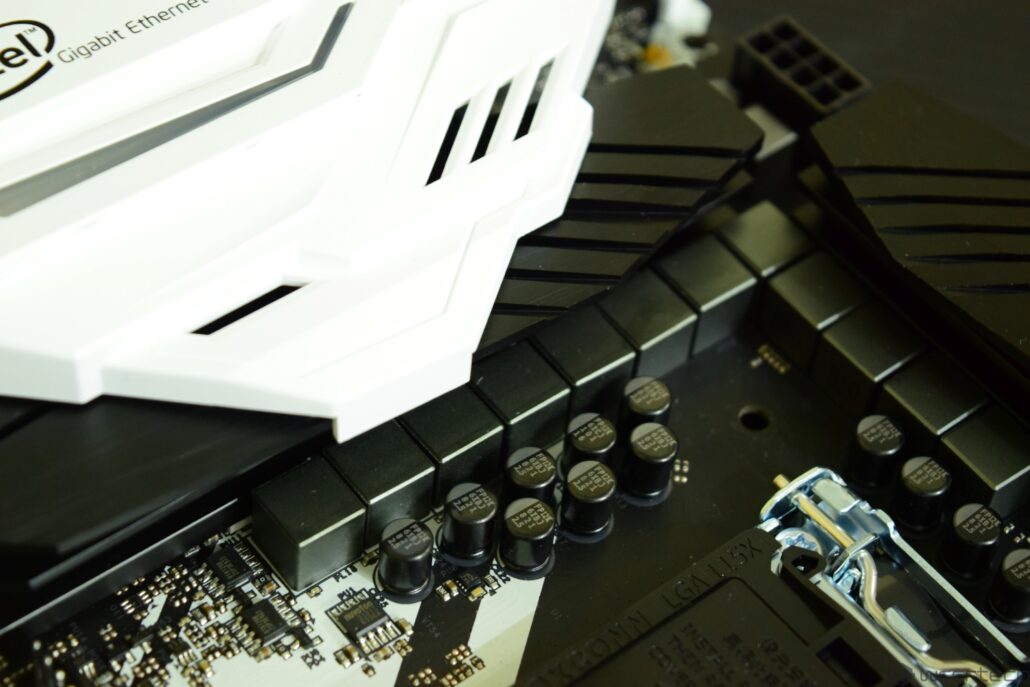 Next to the socket are four DDR4 DIMM slots which can support up to 64 GB (Dual Channel) memory. These slots are rated to support XMP profiles up to 3866 MHz. 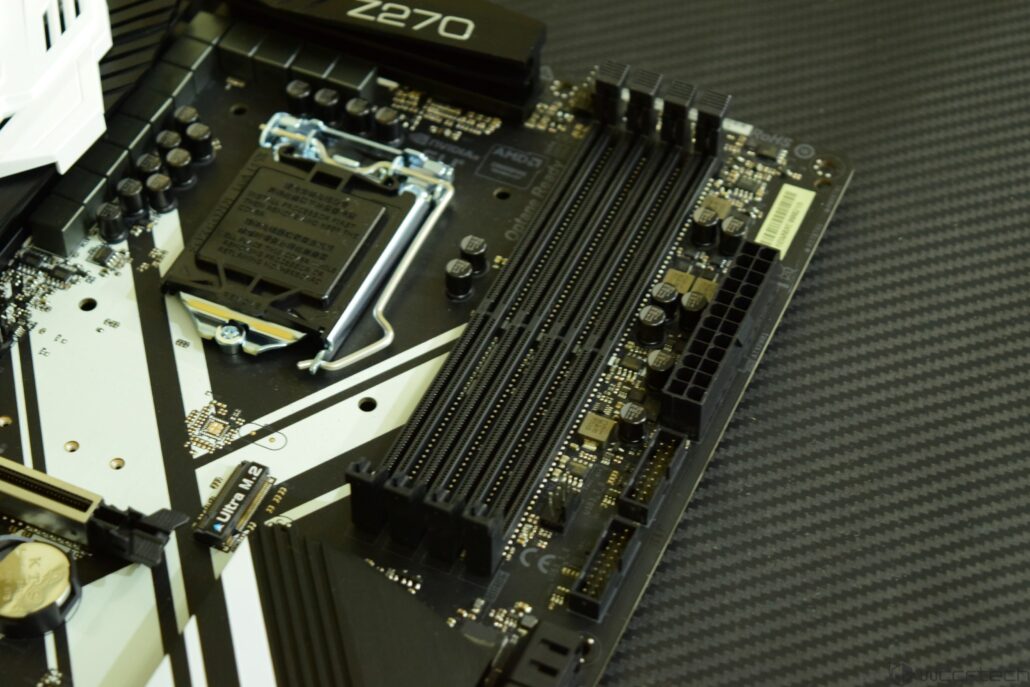 The VRMs are covered by two sets of heatsinks with an aluminum shroud. The top heatsink has the Z270 logo embedded on it. Both sets  are colored black and have cuts within them to add to the aesthetics. 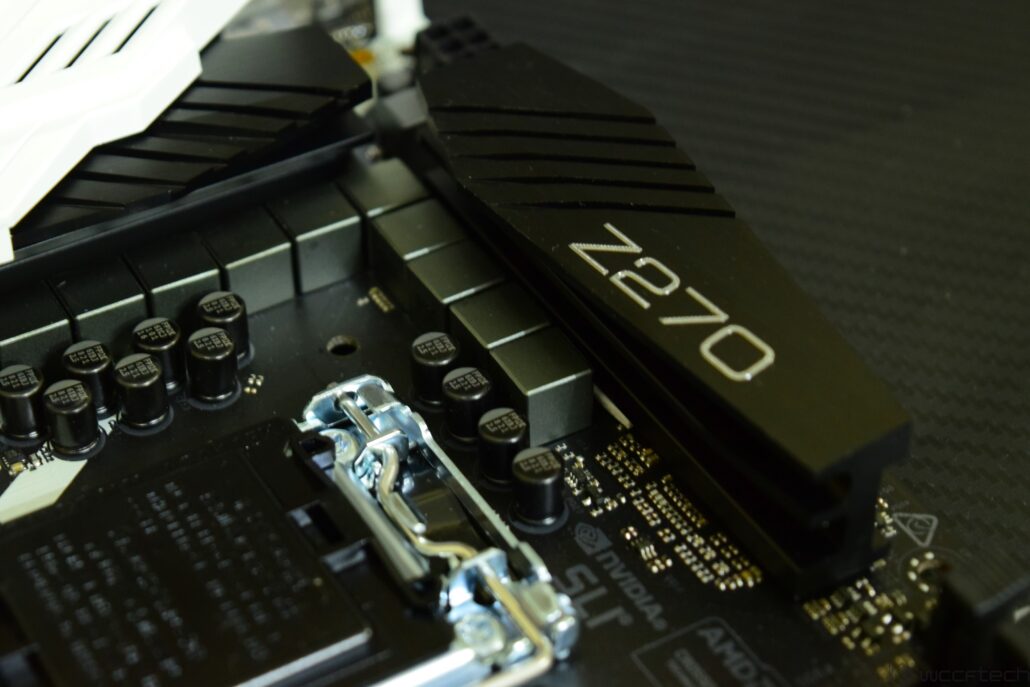 The top I/O cover has an Intel Gigabit Ethernet logo which makes it seem as this board is from Intel. Many old Intel boards had similar logos plastered over them. The logo is there to indicate the use of Intel's technology to power the Ethernet ports. 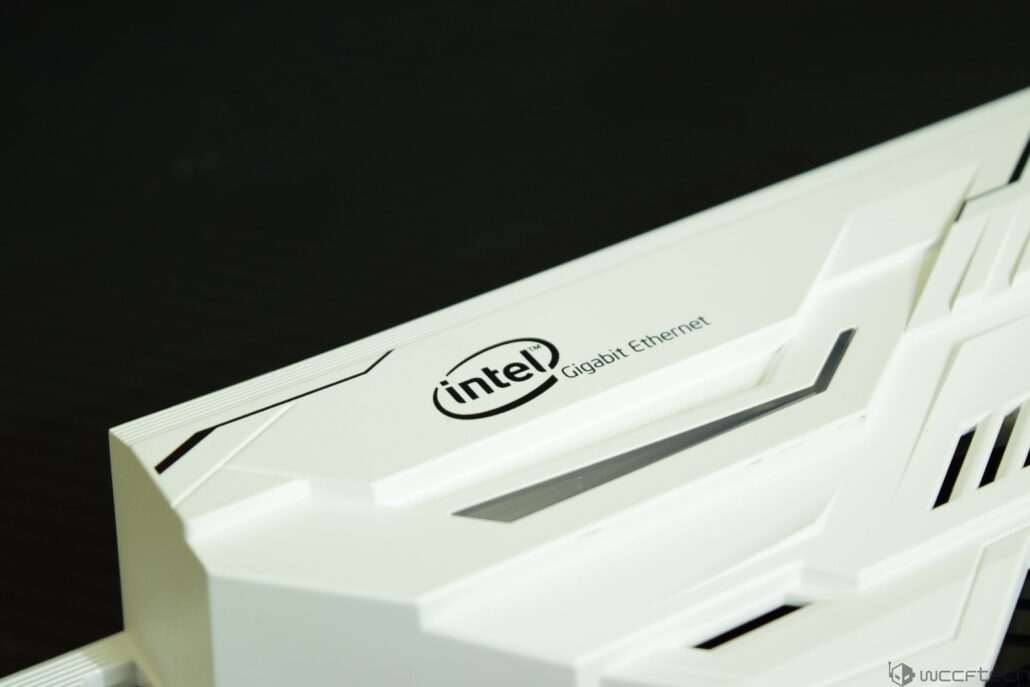 The ASRock Z270 Extreme 4 cover on the I/O panel looks decent. There's no cooling mechanism involved with the cover as it's just for visuals and mostly hollow from the inside. But it does add to the overall looks of the product and that's it's main purpose over here. 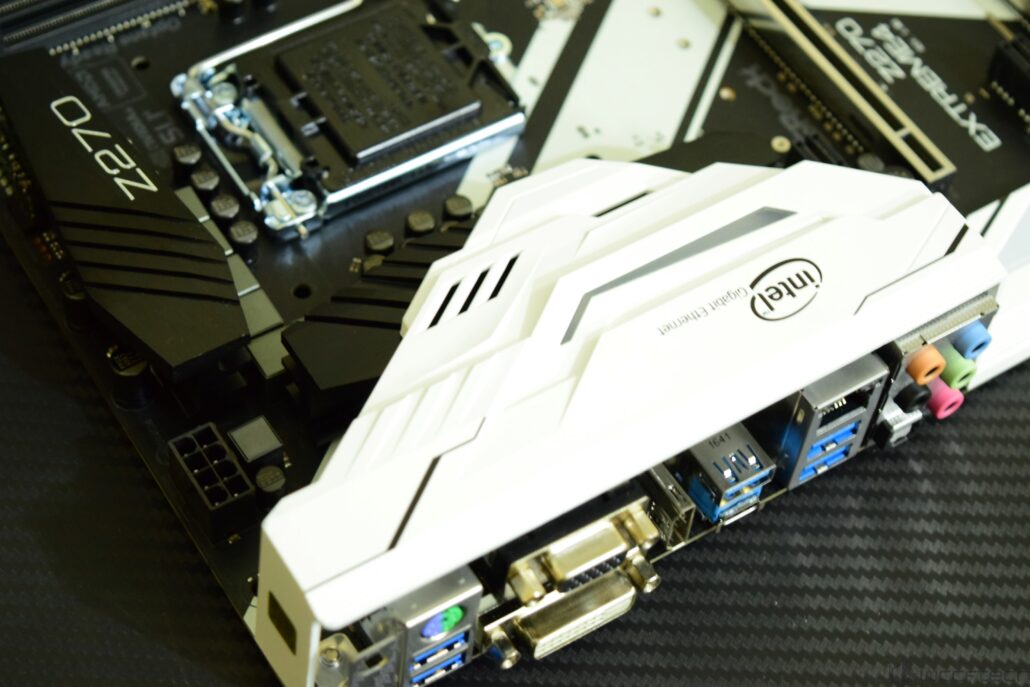 The CPU is supplied power through a single 8-Pin power connector. This will feed the CPU with up to 150W of power. Most Intel CPU's will be shipping with TDP's under 100W but that changes when users overclock, that changes power limit based on applied voltages and clock speeds. 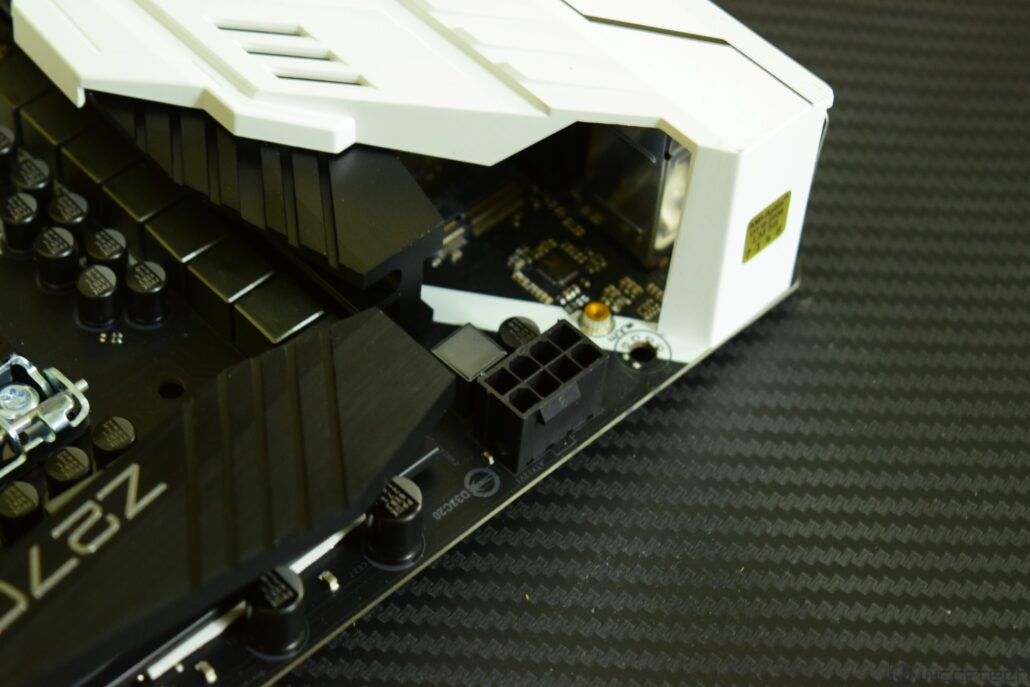 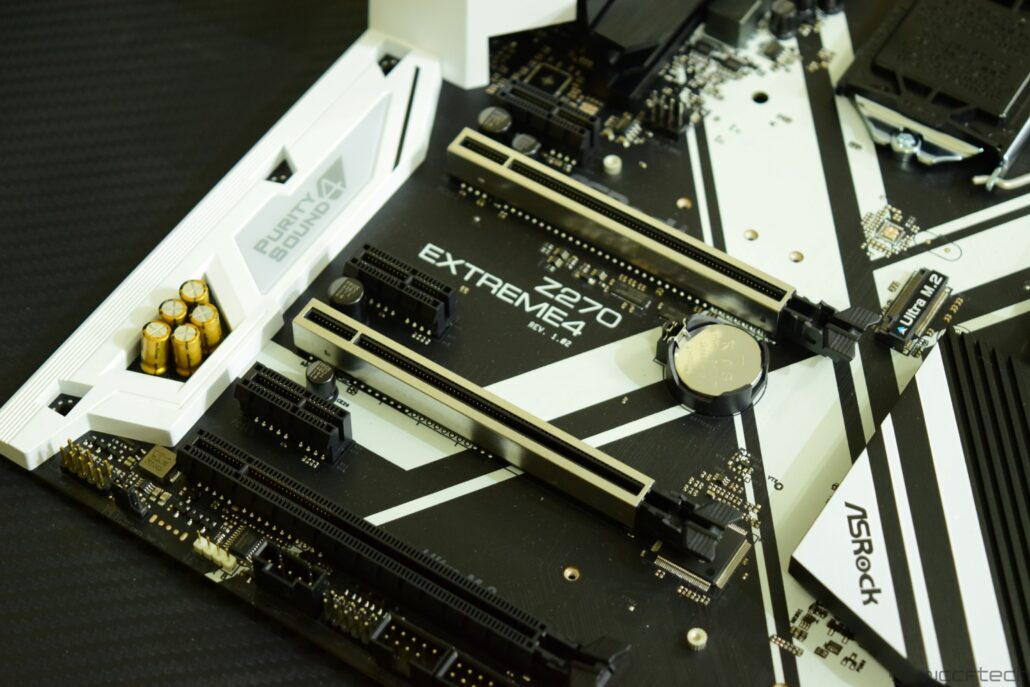 ASRock's Z270 Extreme 4 adopts three PCIe Steel Slots, which are built with more solder points on the PCB for better performance and preventing any signal interference with graphics cards. Allows your graphics cards with enhanced signals and to be well-installed in the PCIe slots. 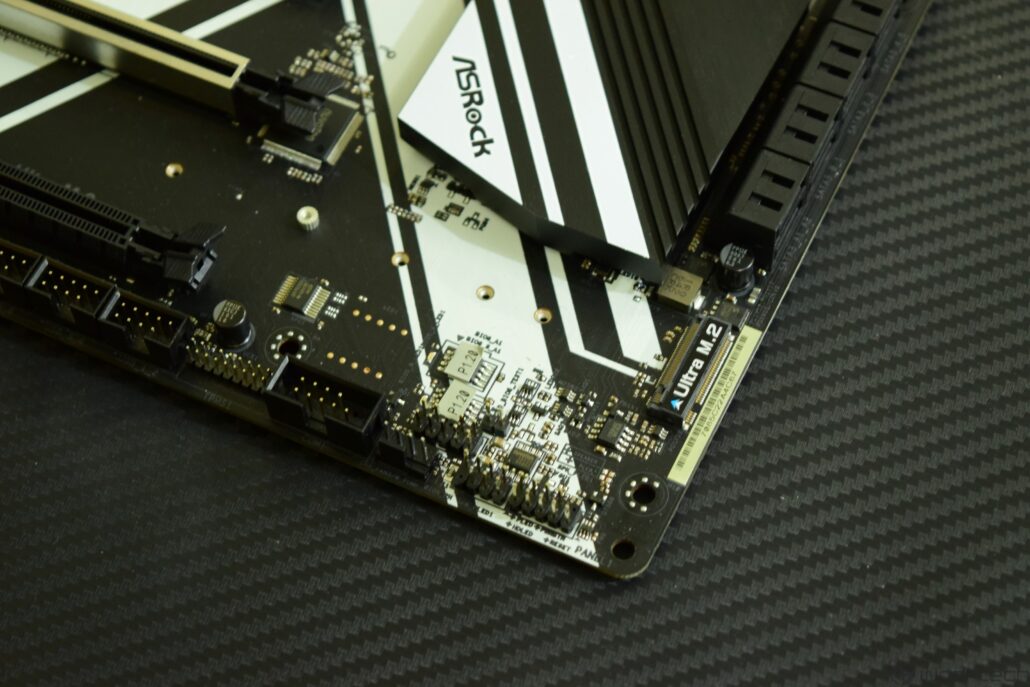 There are two Ultra M.2 slots on the motherboard that operate through PCI-Express 3.0 x4 link at speeds of 32 GB/s. Both slots are ideally placed. One of them is located at the top of the first PCI-e 3.0 x16 slot while the other is situated beneath the PCH with ample room for up to 110mm M.2 drive/memory support. 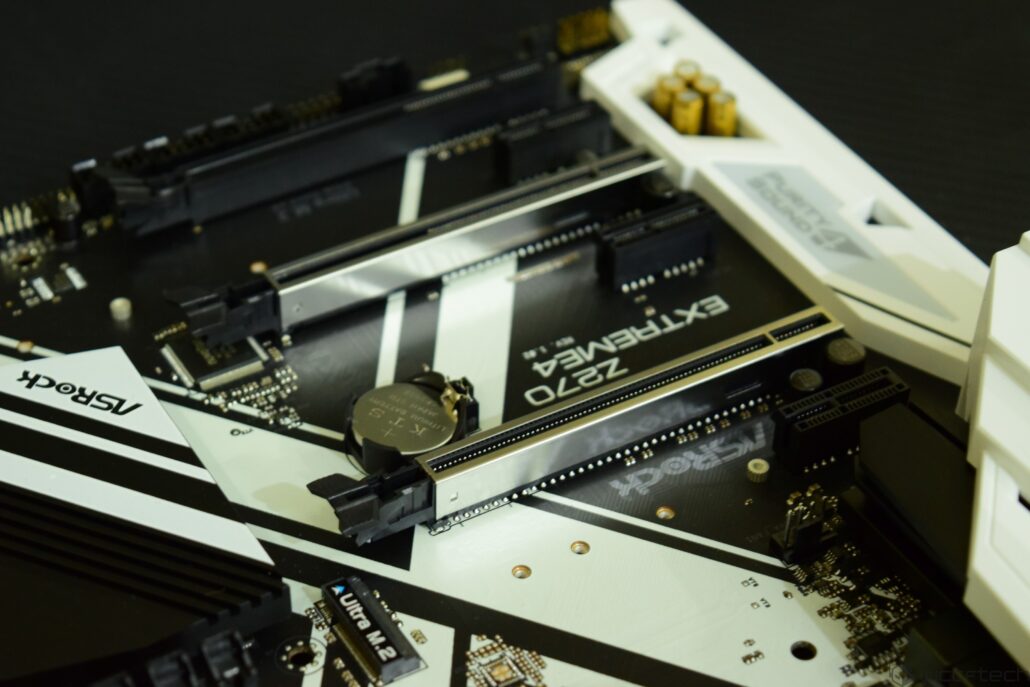 The Z270 PCH is housed beneath a large heatsink with ASRock logo embedded on it. The cover has a white frame and a large metallic block that is finished in black metal. 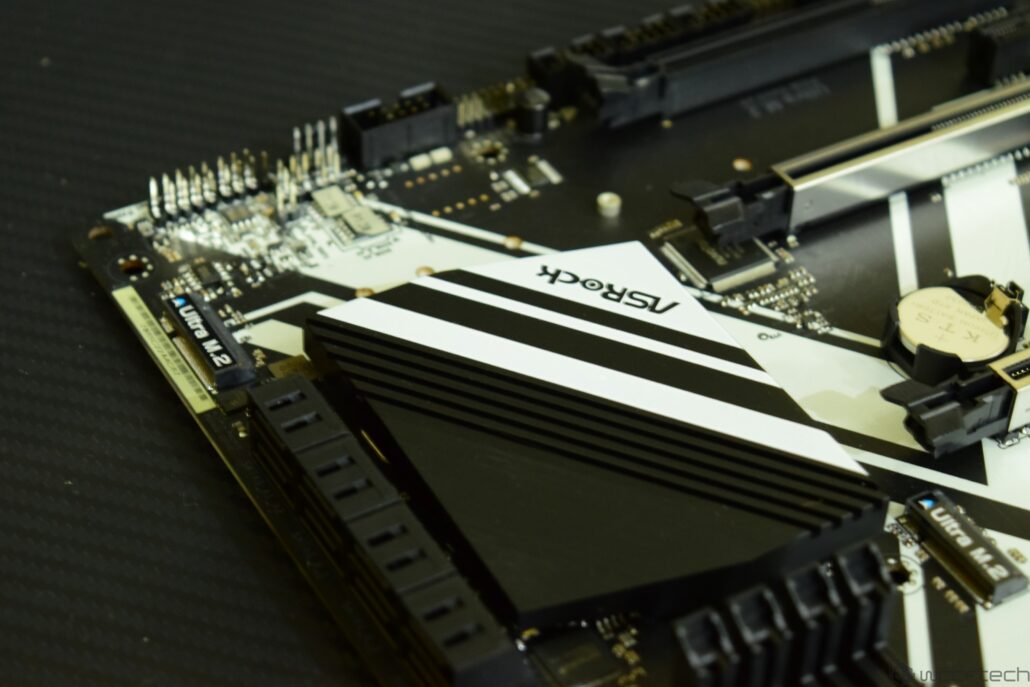 Storage options include eight SATA III ports rated to operate at 6 GB/s. These can support 6 different storage devices at a single time. 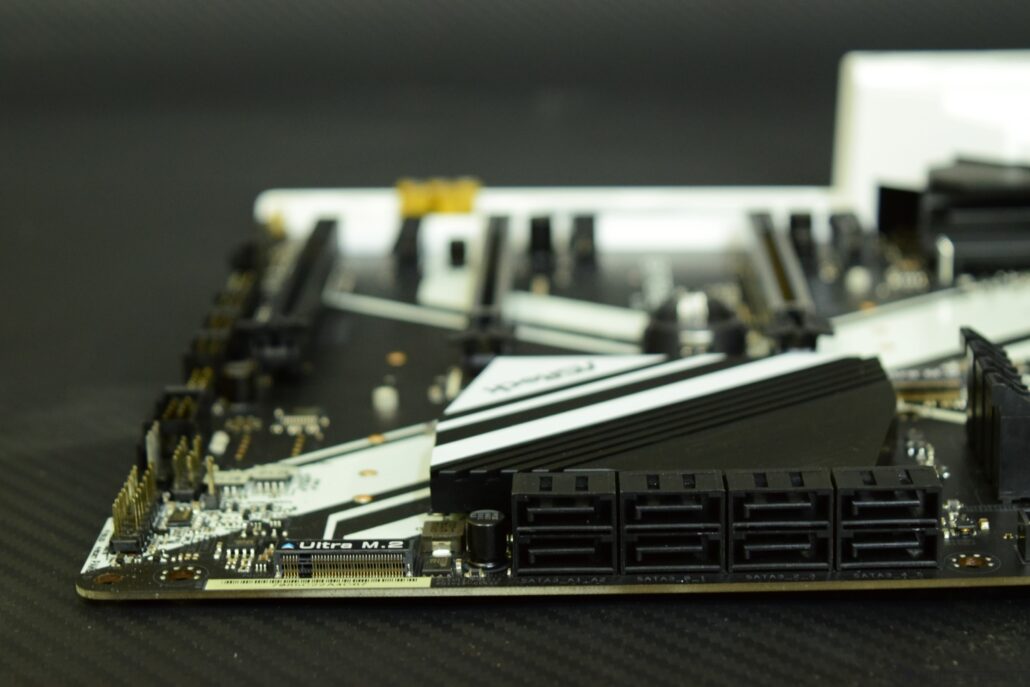 The Purity Sound4 system is located on its own isolated PCB, next to the PCI-Express expansion slots. Purity Sound4 is a combination of several hardware, software audio solutions. 7.1 CH HD audio with the latest Realtek ALC1220 audio codec, individual PCB layers for R/L audio channel, 120dB SNR DAC and other technologies to deliver the crispest sound effects. 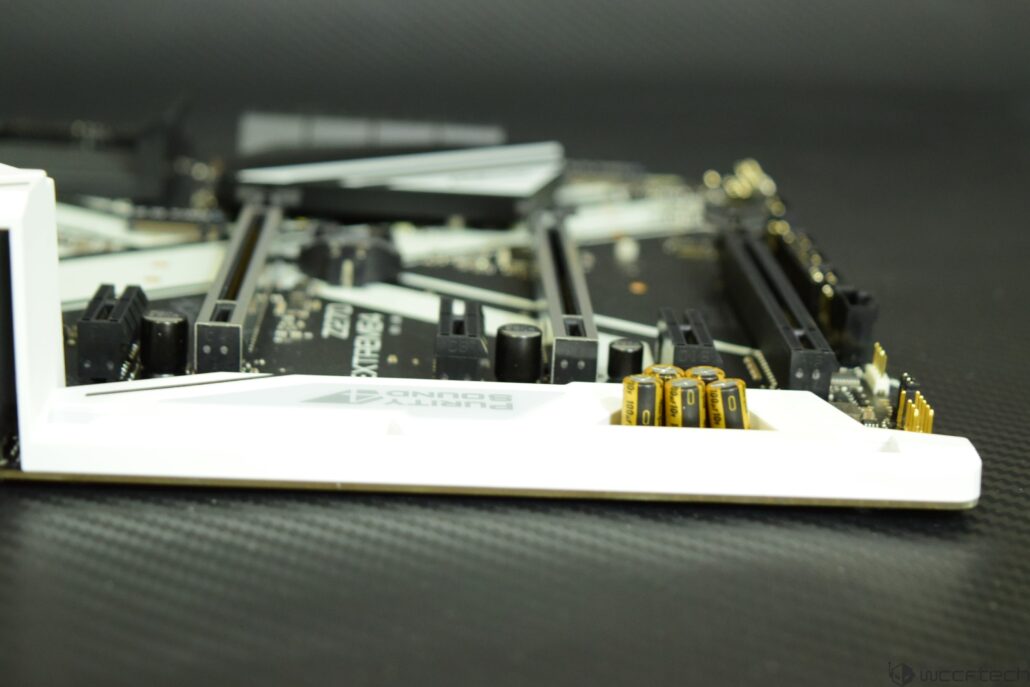 The motherboard has two onboard USB 3.0 ports which can be used to connect to front panel. Most current cases can ideally support such ports. 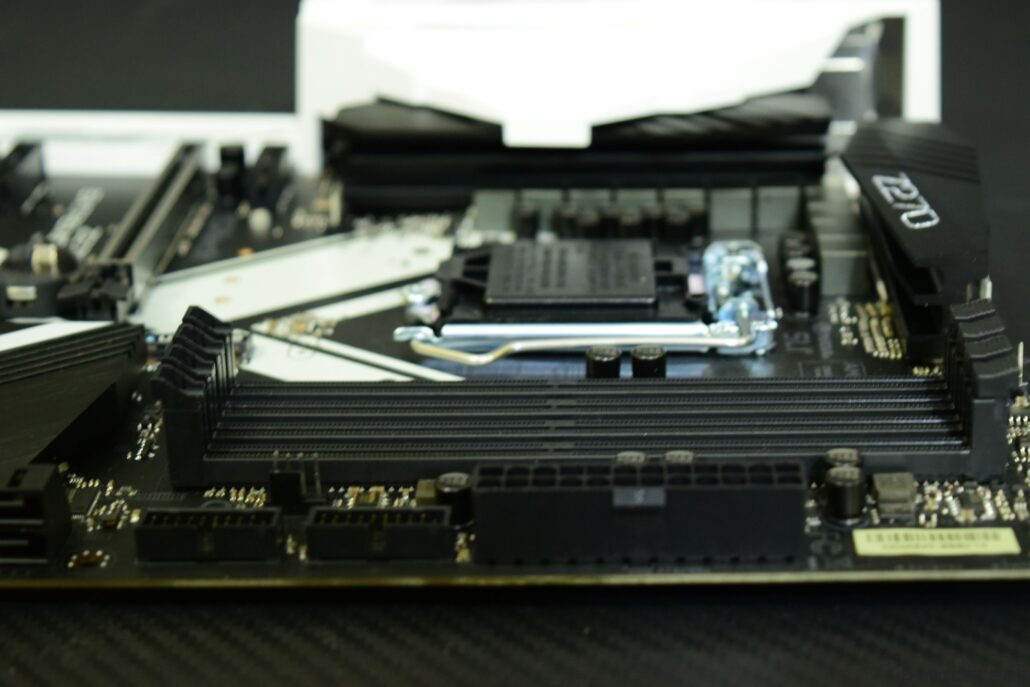 The single M.2 Key-E for WiFI can be spotted hidden under the I/O cover. It's easy to reach it when installing a WiFi card so don't worry about removing the I/O cover since it's not needed. 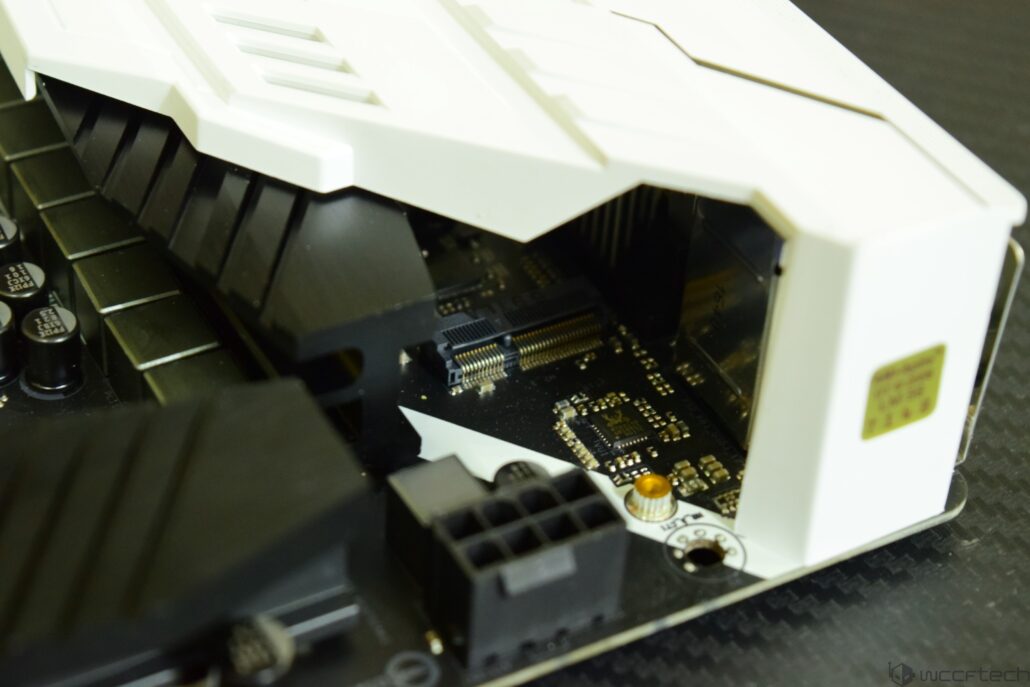 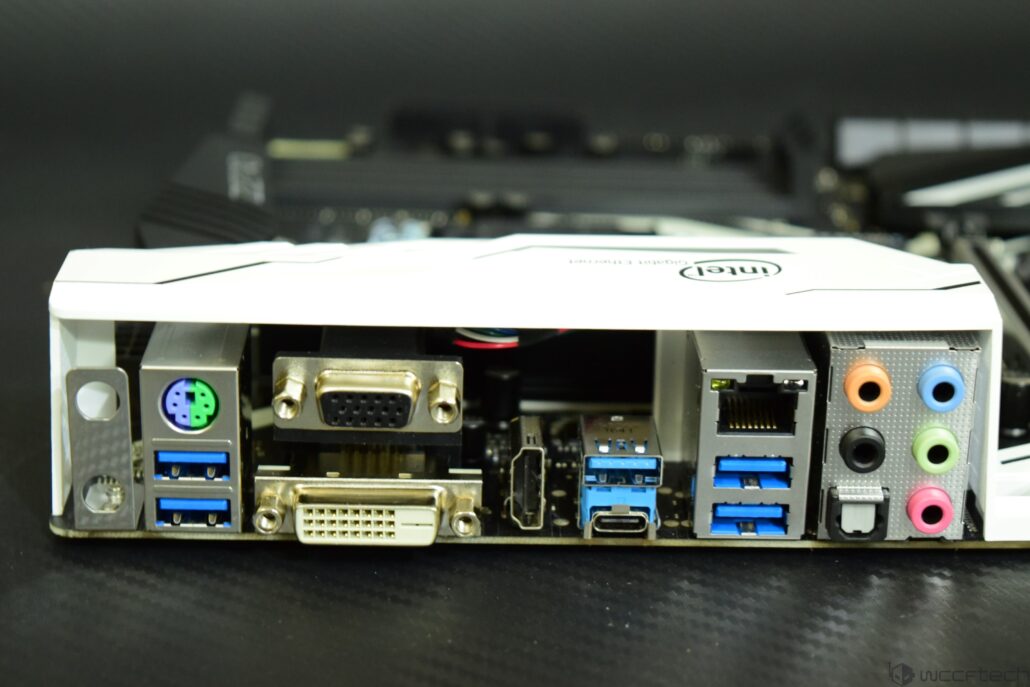